The Ookla Speed Test Global Index has released its figures for December – and once again Australia has tumbled down the ranks. Our fixed broadband speeds are now 55th in the world; behind the likes of Slovenia, Estonia, Kazakhstan and Guam. Despite everything the NBN promised, we are floundering below the global average and continue to slip further each month.

According to Ookla’s latest report (which is based off thousands of unique user test results over the month of December), Australia’s average download speed for fixed broadband is just 25.88 megabits per second (Mbps). This places us 55th in the world; a drop of two places compared to November. It is also well below the global average of 40.71Mbps.

Interestingly, Australia’s global ranking fell despite broadband speeds remaining relatively stagnant compared to last month. In other words, other countries have managed to improve their average speeds month-to-month, while Australia has not. It’s not exactly a ringing endorsement of the NBN’s continued deployment, is it?

On the plus side, Australia’s mobile speeds remain among the world’s fastest, with average download speeds of 48.47Mbps. This places us seventh in the world behind Norway (61.20Mbps), Malta (54.36Mbps), Netherlands (54.17Mbps), Singapore (54.00Mbps), United Arab Emirates (50.20Mbps) and Iceland (50.12Mbps). Perhaps it’s time to consider 4G home broadband as an NBN alternative? 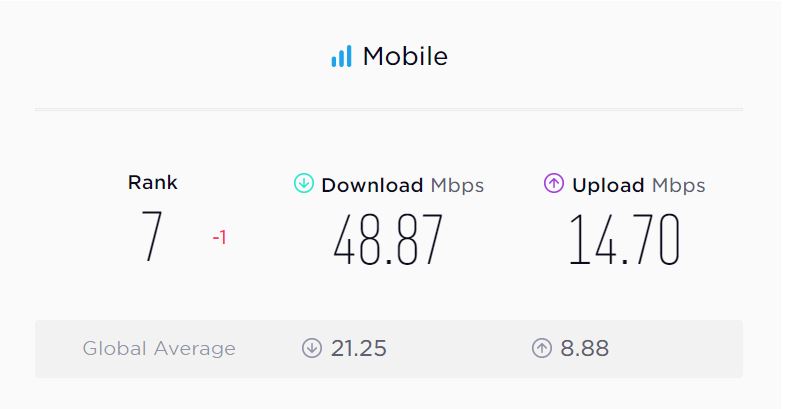 So how did the rest of the world do? Once again, Singapore came out on top for fixed broadband speed, with average downloads of 161.21Mbps. NBN proponents argue that it’s unfair to compare Singapore to Australia due to its much smaller geographical footprint. However, it’s worth noting that Russia – which has a much larger landmass than Australia – also beat us in the Ookla Speed Test Global Index.

At present only around 3 million Australian premises are receiving services on the nbn network.

This means that the majority of data being captured by these kind of reports are being generated by the 5 million or so legacy services on slower ADSL services.

As these premises switch to the nbn network and we move towards our target of 8 million activated nbn premises by 2020 then we expect to see the overall fixed-broadband speeds in Australia increase significantly.

There is already evidence of this with the latest Akamai State of the Internet report showing Australia’s average speed increasing 26% year on year.

By 2020 we expect 90% of end-users on the nbn’s fixed-broadband networks to be able to access download speeds of at least 50Mbps.

We’ll just add that Australia’s average speed increasing 26% year on year hasn’t stopped our global ranking from slipping further down. While our broadband is getting faster, it appears to be accelerating at a slower rate than many other countries.