Revealed: The Fastest Telcos And Cities In Australia For Broadband

Optus is the best fixed-line internet service provider (ISP) in Australia for download speeds overall, while Telstra is the best during peak-hour times, when network congestion is at its highest.

Meanwhile, Telstra is the best for mobile data speeds overall, including during peak-hour.

That’s according to speed testing data from the second and third quarters of this year from Ookla, which operates speedtest.net, one of the internet’s most popular speed testing tools. 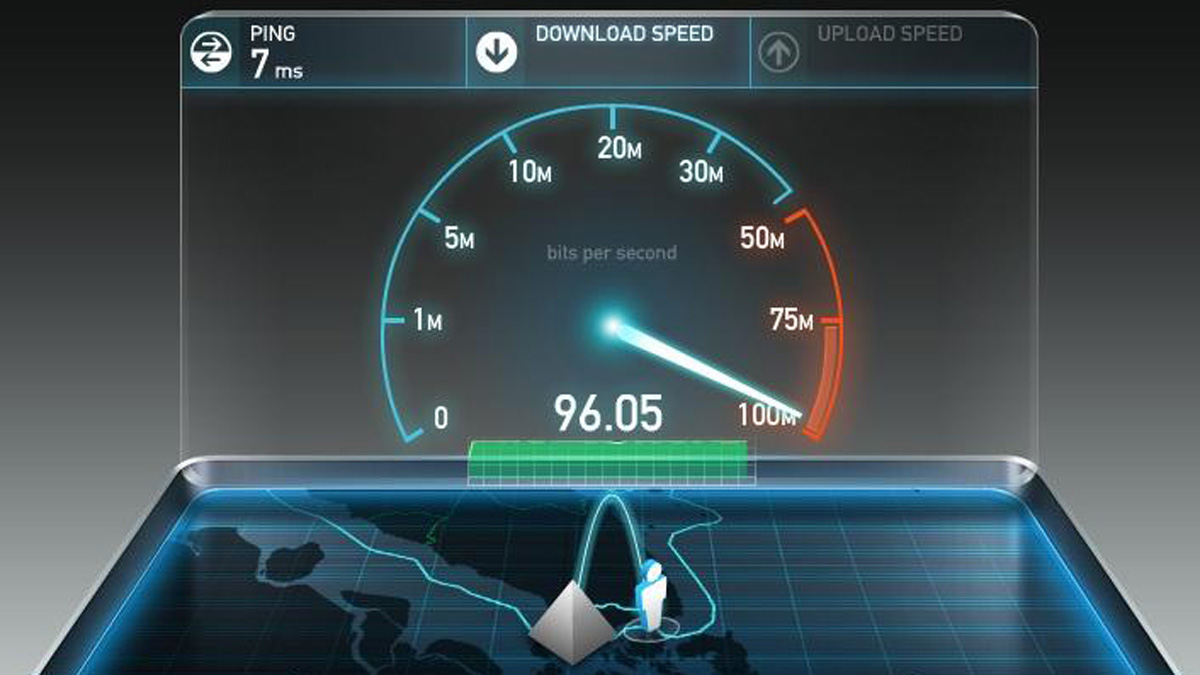 For mobile, Telstra came out on top for speeds overall, followed by Vodafone and then Optus. Telstra averaged download speeds of 44.20 Mbps and upload speeds of 14.32 Mbps.

Meanwhile, mobile mapping company OpenSignal said in its latest State of LTE report released last week, covering January 1 until March 31, that Australia ranked 19th in the world for 4G mobile availability (with 79.26 per cent availability) and 10th for 4G download speeds (33.76 Mbps on average on all carriers). OpenSignal’s 4G availability tracks how often 4G subscribers in a country have access to a 4G signal.

Wollongong No.1 for fixed-line broadband

In the Ookla testing, Wollongong came out on top for the best fixed-line speeds in Australia overall, with the speed testing company giving it a “speed score” of 94.31 out of 100 (speed score incorporates overall network speed performance for both download and upload speed). Average download speeds in Wollongong were 33.72 Mbps, with an average upload speed of 19.78 Mbps upload. ISP MyRepublic was classed as “fastest” in the area.

Geelong came in next, with a speed score of 94.26, followed by The Gold Coast and Newcastle. 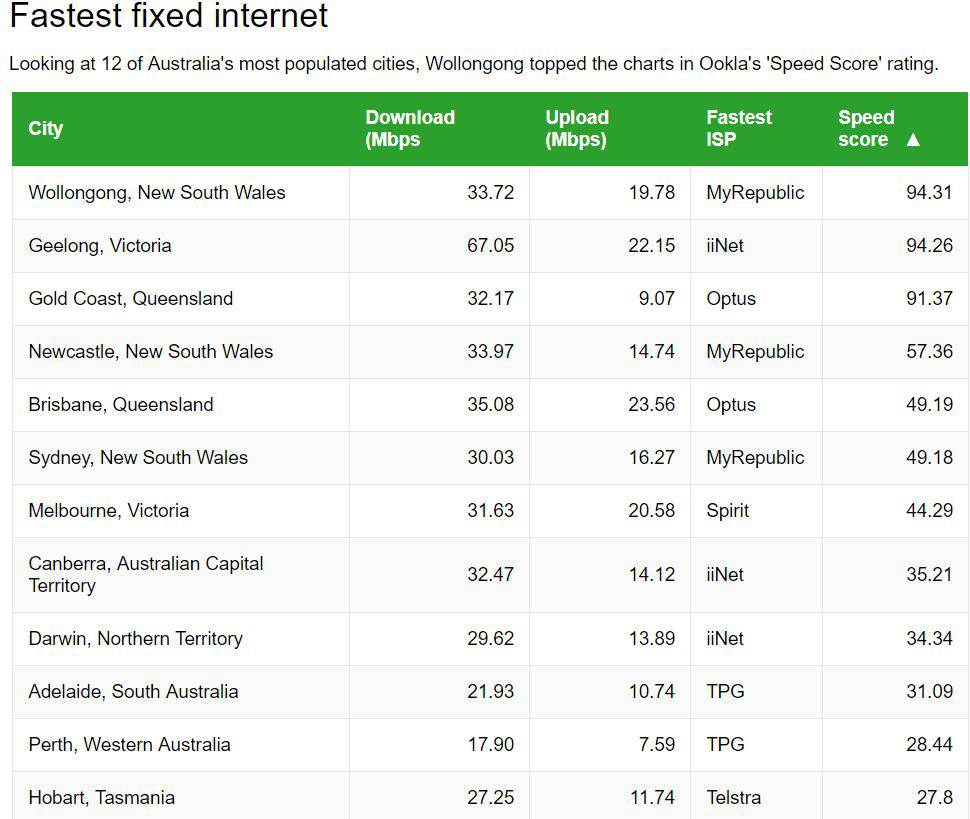 Mobile faster than fixed in reality 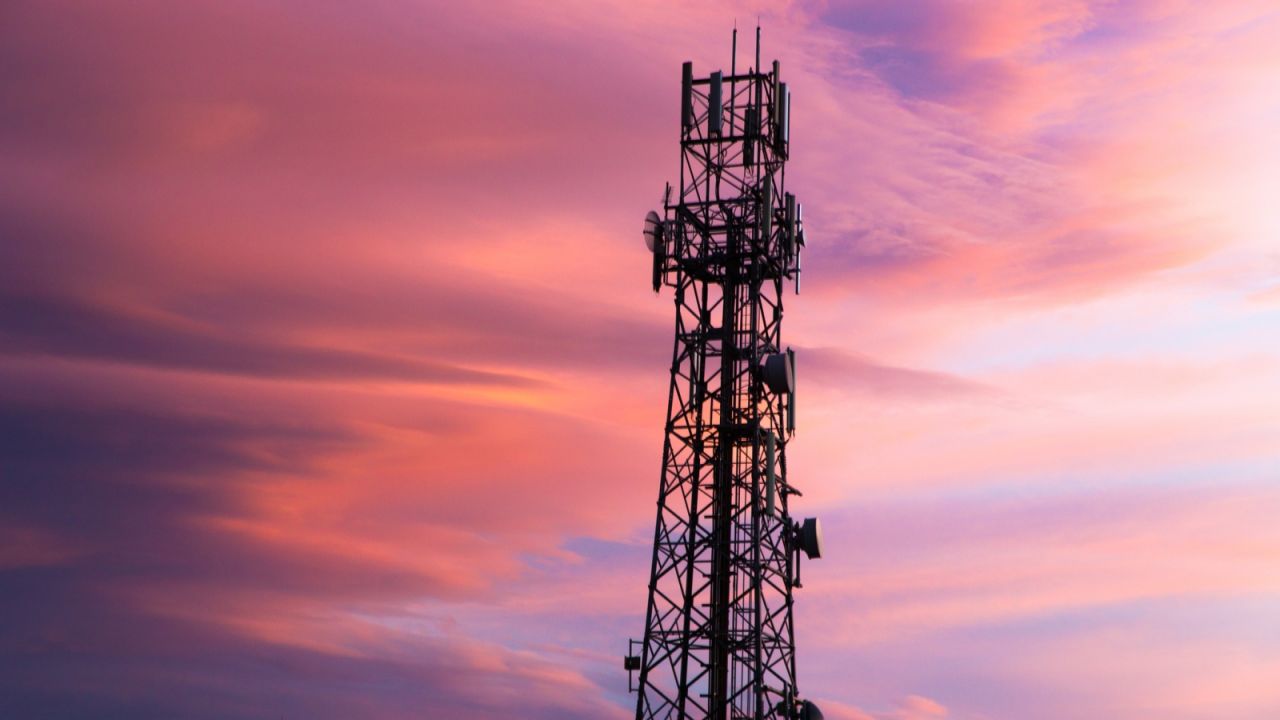 Ookla said it was intriguing that speeds varied by ISP in Australia, as they should theoretically be consistent across all providers who are on the national broadband network. One possible explanation is the fee ISPs are charged by NBN Co per megabit, which critics within telcos say is too high and should be reduced because it acts as a tax on bandwidth, driving down uptake of faster speeds.

Another factor is the mix of access technology, with some areas being served by ADSL, dial-up, HFC, a variety of fibre architectures — from fibre to the node (FTTN) and fibre to the basement to fibre to the premises (FTTP). Meanwhile, people outside the NBN fibre network are served by a combination of fixed wireless and satellite.

Optus and Telstra are likely to be ahead in fixed-line speeds because they have the advantage of having access to the HFC cable network, which helps boost their average download speeds. Meanwhile, TPG has been rolling out a fibre to the basement network that has helped increase its speeds.

Another reason speeds vary so much between carriers is because some telcos attract customers at the lower end of the market who wish to purchase only 12 Mbps download speeds and 1 Mbps upload speeds. 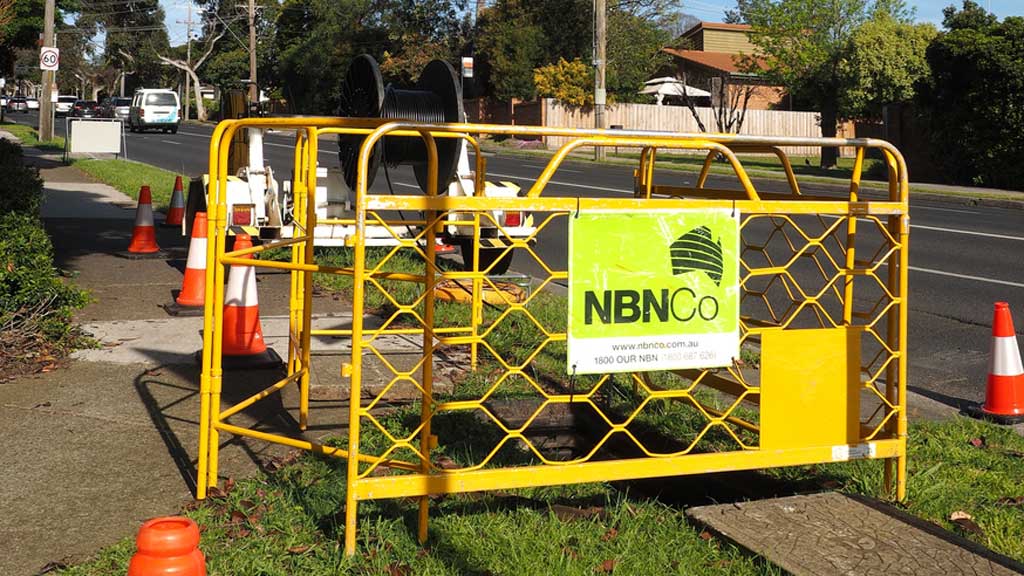 Telstra said it was pleased Ookla had confirmed the telco had the fastest mobile network.

“We recently engaged Systemics to conduct an independent benchmarking survey of the three mobile networks, and after driving 41,000 kilometres around Australia making calls and using data they found Telstra was the leading national provider,” a Telstra spokesperson said.

While Ookla was one of the more established tests, Telstra said there were still limitations to the accuracy of aggregate third-party measurements given issues with sample size and geographic spread.

“The results can be especially problematic on the fixed network given the different mix of technologies involved,” the spokesperson said. “Also these sorts of tests do not provide an overall view of what customers value, such as coverage, support for video streaming and new capabilities such as our support for the internet of things.”

Meanwhile, an Optus said the company was pleased the Ookla report showed that it offered the fastest fixed broadband internet speeds overall in Australia, “particularly given the significant rise in streaming services”.

“We will continue to roll out 4.5G network technology to select capital cities which will result in customers’ experiencing significant improvements in data speeds,” a spokesperson said.

They added that it was important to take “a holistic view of a carrier’s network which should also include network coverage — including regional and remote towns — and also voice performance”.

A Vodafone spokeswoman said it was encouraging to see the Ookla results “while our network continues to evolve and meet the needs of our customers as their usage habits change and grow over time”.

Asked if any of the mobile providers prioritised speed tests over other data in order to game results, a Telstra spokesman gave a firm “no” while Optus said it did not do this either. Vodafone did not answer the question.

Nicholas Demos, MyRepublic’s ANZ managing director, said the results were a great indicator of the growing education in the local market since the provider’s launch less than a year ago.

“There has been a shift in the Australian internet landscape and MyRepublic congratulates Ookla for this survey that provides the public with detailed information on ISP performance by city. This will help provide much-needed guidance to the end customer in what is a cluttered market,” he said.

A spokeswoman for Vocus Group, which owns iPriumus, said Vocus had recently been reviewing its NBN services following the issuance of the guidance on broadband speeds from the Australian Competition and Consumer Commission (ACCC).

“This review has included determining the best approach that ensures customers are provided with clear information about the maximum attainable speeds that they can expect to receive, and the expected performance of their service during peak periods,” the spokeswoman said.

“Once we complete our review we will provide the necessary information to consumers, and will offer appropriate remedies for customers who are not capable of achieving the maximum attainable speed of their plan.”

It’s understood that the Vocus consumer business has historically operated in the cost-conscious end of the market, and therefore has a high proportion of customers on the lowest NBN speed tier (12Mbps/1Mbps plan).

Ookla said it would be interesting to see if the “rapid on-boarding of homes to the national broadband network” and the 2018 addition of G.fast technology to the NBN mix, would “markedly improve performance” or whether consumers and ISPs would opt for slower tiers of service.