Sous Vide Prawns Are Almost Impossible To Mess Up

Hello friends, and welcome back to Will It Sous Vide?, the column where I make things with my immersion circulator. This week we’re cooking a tasty little crustacean – the prawn – in a myriad of ways.

To me, there is no such thing as an “OK” prawn – it’s either cooked to tender, slightly springy perfection, or it’s rubbery and just plain bad. With “traditional”, non-sous-vide cooking, the difference between the two extremes is usually a matter of minutes but, once again, exact temperature control and a sealed cooking environment help us achieve glorious results with minimal stress.

I like my prawns shell-on, which means I had to do a bit of de-veining, but that was the hardest part of this crustacean-cooking project. To see just how much flavour we could pack into a 450g of prawns, I made three bags:

All three of these bags went into a 57C sous vide tub for 15-30 minutes (more on that in a bit), and all three were delicious. However, I did discover – quite by accident – that the type of bag you pack your prawns in, and how you pack it, makes a big difference in how evenly and quickly they cook. 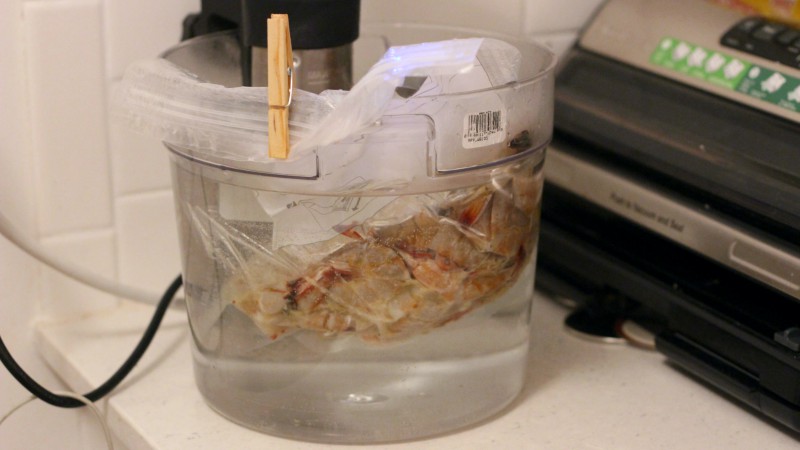 Last night, when I was preparing the first two batches of succulent sea bugs, I had had a few cocktails, which is what happens when you write in bars instead of coffee shops. (In my defence, all the coffee shops were closed.) When I returned home to start the prawns, I was dismayed to find that my roll of FoodSaver bags had run out, and I only had the weird zipper-style parcels that I couldn’t figure out how to seal in my slightly inebriated state. 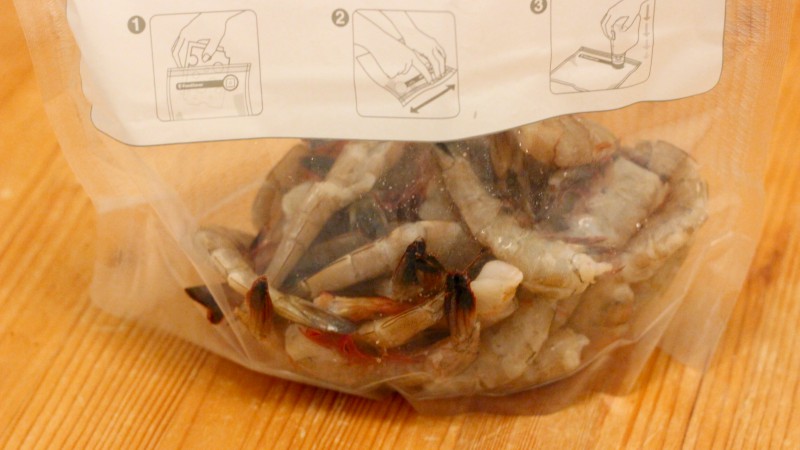 Yes, I see the instructions on the bag; I was just too lazy to be bothered to read.

Yes, I see the instructions on the bag; I was just too lazy to be bothered to read.

This means the prawns simply sat there, in pile, tails all tangled. After about 15 minutes of cooking time, the prawns on the outside of the pile were nice and pink, but the ones near the core of Mount Prawny were still a bit raw and grey. This was easy to fix – I simply had to give the bag a shake and the toss it back in the bath for another 15 minutes – but it is something to be aware of if you don’t have a vacuum sealer.

Of course, the next morning, when I went to prepare my last batch of prawns, Sober Claire did what Tipsy Claire could not, and found another roll of the vacuum bags I know how to seal. There was much rejoicing. 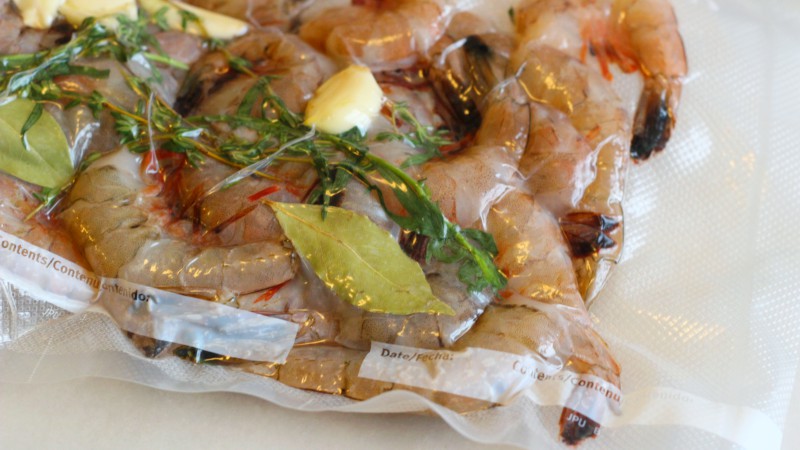 This is what you want.

This is what you want.

As such, I was able to arrange the last batch of curly crustaceans in a mostly-uniform layer. After about 15 minutes in the bath, all the prawns were plump and pink. Even though the non-vacuum-sealed bags took an extra 15 minutes to cook, I didn’t notice a difference in quality. As you can see from the below slideshow, all three batches were pretty glorious.

The simple, aromatic bag with bicarbonate of soda, which were cooked in a vacuum-sealed bag

So, can I say with confidence that prawn sous vide? Yes, I most certainly can, and I have to add that this was the easiest, least-stressful prawn-cooking experience that has ever happened to me. Every little morsel of sea bug that passed my lips was tender, not at all rubbery, and infused with whatever flavour blaster I had added to its respective bag. In terms of bicarbonate of soda, I did like the slight bounce it gave to that prawns in the last bag, but whether or not you add it is a matter of personal preference. The un-soda’d prawns were super tender, delicate little bites of poached perfection, and Ofclaire – who is from New England and has many shellfish opinions – said they were the best he’d ever had. (Lest you think he said this to gain favour, know that he absolutely hated the pasta sauce I made a while back, and was very vocal about it.)

Also, if you happen to add butter or olive oil to the bag, you have a fantastic sauce suited for tossing with pasta, as I did with the scampi. Just add a little pasta water to starch it up, and maybe another pat of butter, and toss with the noodles once they’re al dente. You do not, however, need any fat in the bag for these prawns to taste their best. The bag which contained nothing but prawns and aromatics was bursting with flavour and, in a development scientists are calling “unnerving”, I didn’t miss the butter at all.

My point is that sous vide is a pretty perfect way to cook these things, especially if you need to make large, delicious quantities. If you’re a fan of serving a prawn cocktail at your holiday soirees, I can’t recommend this method enough, but you don’t have to throw a party to make excellent prawn; no one would judge you for ploughing through half a kilo of these on your own. (Well, at least I wouldn’t.)