Until recently, the best way to cover your home or office with reliable WiFi was to invest in a decent wireless router. If the signal didn’t cover the entire premises, you could add a powerline network adaptor or add a wireless access point to the network. But a new class of device that employs mesh networks is on the market. Over the next few days I’m going to look at three mesh network systems: Linksys Velop, Netgear Orbi and TP-link Deco.

I first became interested in mesh networks back when Nicholas Negroponte championed his $100 laptop, the OLPC XO. His dream was to build a networked computer that could be used in remote environments and deliver connectivity to students in places where network connectivity was challenging.

Those computers used the 802.11s protocol. Basically, if one computer had an internet connection, it could be wireless daisy-chained to other OLPC (it stands for One Laptop Per Child) devices. While the protocol is well-established, it never really took off commercially.

When it comes to spreading the WiFi signal further in your home or office, there are some options. You could use powerline adapters or WiFi access points. While those options can be effective, they can be a little tricky to set up. Powerline systems rely on endpoints being on the same circuit – something that didn’t work at my last home. And wireless access points, particularly for consumers, are hard to find. You could use another wireless router but many routers don’t make it easy to turn off NAT and other routing that make it hard to add a second wireless “distribution point” to a network.

With a traditional wireless router, an array of antennae spread the wireless signal to deliver broad coverage. But a change introduced to the 802.11n standard added support for a system called beamforming. Rather than only supporting wireless transmission in a broad spectrum, beamforming allowed wireless devices to transmit directly from one device to another. However, when beamforming was introduced with 802.11n, it wasn’t done in a very effective way. Manufacturers could deploy it in different ways so that a transmitter from one device maker might not work with a receiver from another.

But, with 802.11ac, beamforming was standardised. Even though support for the feature is optional – not all transmitters and receivers support beamforming. When it’s implemented it has to be done in a standard way. The Orbi, Deco and Velop systems all use beamforming to send data between each access point. So, while each transmitter in the mesh spreads its signal wide, comms between the “core node” and the satellites are more efficient.

In theory, this means you should be able to mix and match devices from different manufacturers. We’ll see if that’s the case.

As I assess each of these systems, there are a several things I’m going to pay particular attention to.

Initial setup and management: All three systems I’m looking at rely on mobile apps for initial set up and management. I’ll look at things like whether the network settings are secured as soon as they are connected to my network, what sorts of controls they offer for parents and network prioritisation options for streaming, gaming and VoIP.

Aesthetics: As you’re likely to have a two or three of these devices connected to your network spread around the home or office you want them to look good.

Performance: I’ll carry out the same file copying tests as well as real world tests such as steaming content from online services as well as a NAS running Plex.

Connectivity: While most of the gear in our homes and offices is wireless, there are still some devices that work best over a cable. So, support for wired devices is still handy. And being able to remotely connect to the devices to make sure everything is in working order is also useful.

Bang for buck: These kits cost more than an entry-level off-the-shelf router. Are they worth the extra money?

I’m going to test each kit in my home. I’ve only just moved in so I’m keen to ensure I get my network into tip-top shape. We’re a household of seven people with a munch of connected devices. Much of the time, we’ll have

The internet connection is via Telstra Cable (no NBN here yet) with downloads running at about 110Mbps and uploads at a paltry 2.4Mbps according to my most recent speed test.

The house is brick veneer with a steel frame and one solid brick internal wall. Here’s the floorpan. 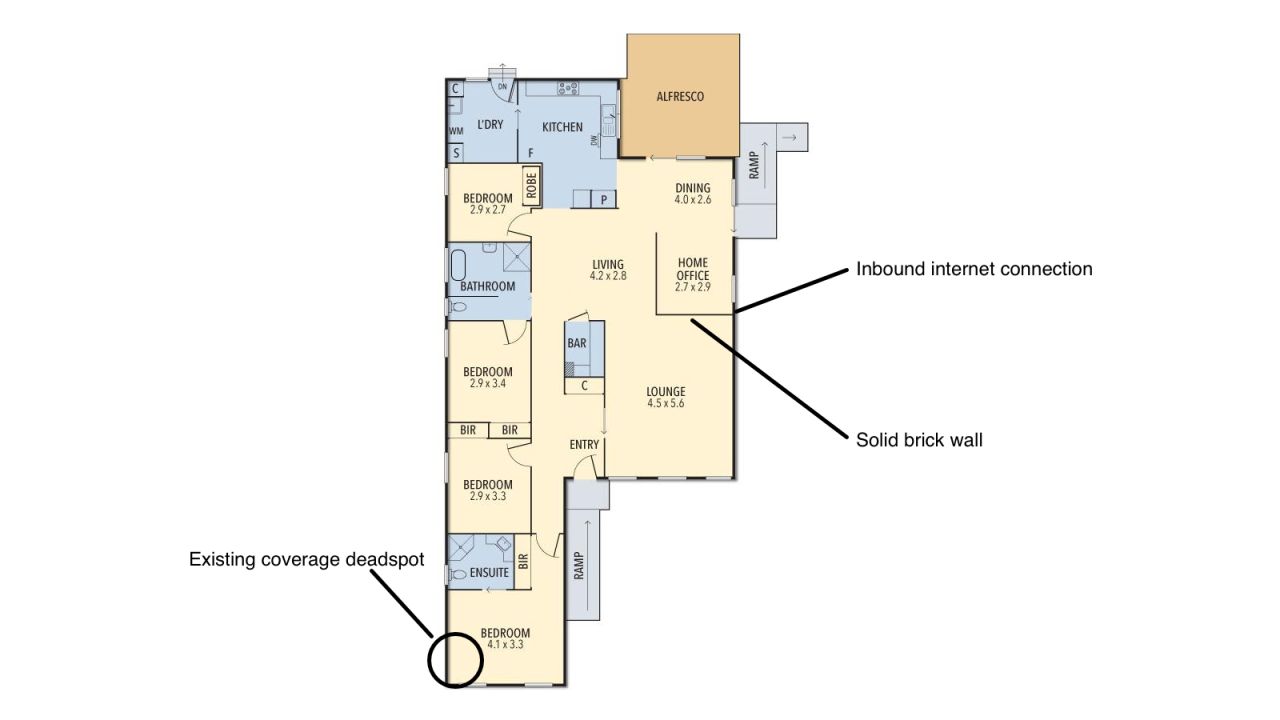 Are there any features you particularly want me to report on or check? If you’ve been using a mesh network system for a while, have there been any particular hassles you’ve had or tips you’d like to offer?