The All Watercooled, Glass-Top Workspace

Over on the battlestations subreddit, Sarne shared this beautiful setup with a side-by-side computers in a custom desk with an open top and LEDs so you can see the inside. The whole thing is just beautiful.

We should note out of the gate that the whole setup is custom made — the desk, the computers, even the cooling and lighting for the computers were all made in Sarne’s workshop, and the whole Imgur gallery (linked below) contains all 70 photos of the process, from starting with the metal framing for the desk all the way through to the finishing touches and the wood for the desk, the monitor arms and mounting process, and even down to the keyboard and monitor selection. He notes:

I’ve been wanting to do this for years. It has gone through many variations and 3D models so needless to say when I finally got the go-ahead to do it, it got done. I took about 2 months to complete it once my parts got in. I did everything myself: plans, cutting, welding, woodwork, wiring, tubing, everything. My lovely wife took the pictures typically while I was working on it. These top 3 pictures are probably the only ones I ever took of it, 4 months after I finished it.

There’s 3 computers in this desk. His, Hers and my toy server. I’m getting pretty tired of typing, so just ask questions in my thread and I may get around to answering.

That thread is linked below too, if you do have questions, but it’s a pretty popular thread, so check and make sure something you’re curious about isn’t answered first. Here’s a closer shot of that open-top center of the desk, with the water cooling rig laid out for all to see: 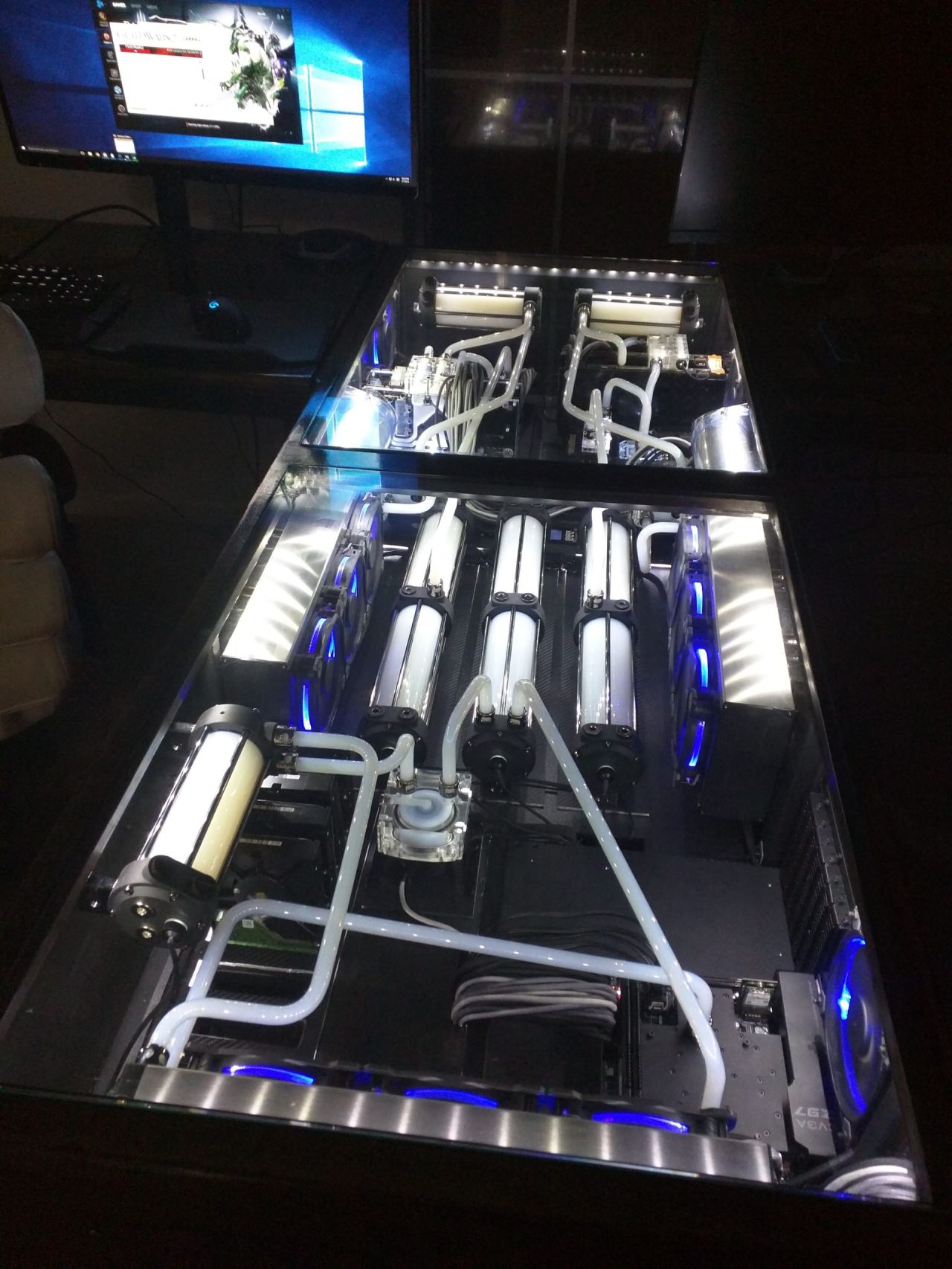 That shot is in white — the gallery has similar images with the LEDs set to red and blue, and shots of each PC, his, hers, and the server, in other colours. Later on in the gallery, you’ll even see photos of him leak testing that watercooling setup — critical when you make something that big. Oh, as for the specs of the systems:

That’s the important stuff, right? I had a price limit and I already had a GTX 970 sitting around, so I cut a corner there.

This is my old PC. I built it about 3-4 years ago when that stuff was flaming new. My wife doesn’t play much so no harm done.

Hodgepodge of crap. I have probably 30+ tb of crap. I use it mostly as a NAS, running FreeNAS and a handful of plugins for cloud and media storage/usage.

All in all, it’s a stunning build, and it’s even better when you’re scrolling through the photos of how it was all made and assembled. Hit the link below to check it all out.