The Bluffer’s Guide To The AFL Finals

Australia’s national game, Australian Rules Football, features 22 men on two opposing teams trying to kick an oval ball through the middle of some large, vertical sticks. Over the past 23 weeks, the 18 teams of the Australian Football League (AFL) have tackled, kicked and jumper-punched each other to oblivion, leaving only eight teams to compete for the Premiership Cup.

Tonight, the Finals begin. And even if you hate football, you can’t avoid the conversations.

How Did We Get Here?

The AFL season, like most Australian sporting codes, features a finals series that dictates the overall winner. Unlike, say, the English Premier League, merely finishing on top of the ladder after 23 rounds means very little.

In fact, the team that finishes on top of the ladder only wins the whole thing about half the time. This year, the Adelaide Crows Football Club finished on top of the ladder. This means they’re the ‘Minor Premiers’, but it really doesn’t count for much else.

Which Teams Are Playing In The AFL Finals?

The Finals always consist of eight teams. The ‘Top Eight’, as it’s imaginatively known, is dictated by the amount of wins each team had over the course of the year. The aforementioned Adelaide Crows finished top and then the other seven teams finished, in order: Geelong Cats, Richmond Tigers, Greater Western Sydney Giants, Port Adelaide Power, Sydney Swans, Essendon Bombers and the West Coast Eagles.

That is to say: there’s a decent spread of teams from all over the country, so no matter where you are, you’re likely to be roped into some conversation about how ‘the umpires robbed us’, how ‘the umpires absolutely sucked tonight’ or how ‘those bloody umps couldn’t see a damn thing tonight’.

Generally, when talking about the AFL, you get to talk a lot about the skills of the umpires.

When Are The AFL Finals Happening?

The Finals officially start on September 7 and culminate in the Grand Final on September 30, the last Saturday of the month.

The first round of the finals features four games: 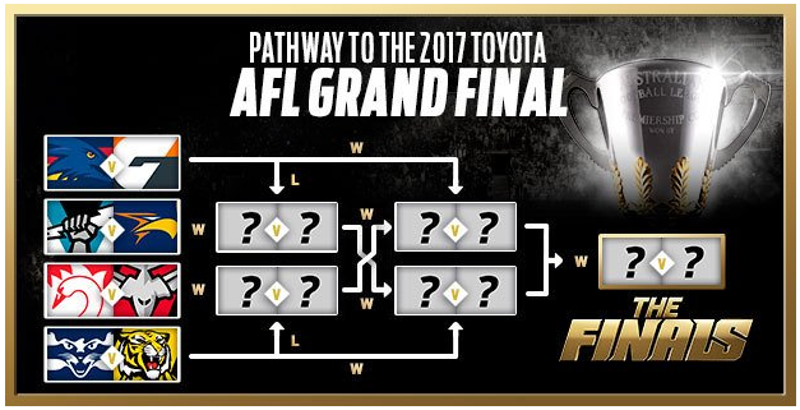 What AFL Team Should I Support?

The Adelaide Crows finished on top of the ladder and are hot-priced favourites to take it all out, but in the lead up to the Finals they’ve faltered a little. They also go into their first final missing one of their best players, Rory Sloane, who had his appendix removed ten days before the Finals.

This is the second time an Adelaide player has had their appendix removed this year.

You can make a strong case for the Sydney Swans being the best team of the year, even though they lost six games in a row to start the season. In fact, the Swans are the first team to ever make the finals after starting a season with six losses, so they’ve turned their season around and are a huge threat to take it all out.

The sentimental favourites will be the Bombers, who were embroiled in a drugs scandal for the better part of the last four years. Most of their players were banned from football last year, but they all returned this year to take them into the finals.

If Essendon somehow manage to win the Grand Final, the redemption story will be made into a movie. I can already see it.

Geelong have the best player in the competition and that always helps. Richmond have made the finals for a few years but haven’t won a single finals game so they’ll be an interesting one to watch and out of all the remaining teams, they’ve gone the longest time since winning.

Greater Western Sydney have a bunch of kids that play football really well. That’s a strong indicator of what they can do. Whereas, the Eagles only snuck in to the finals in their very last game.

Whatever you do, , just get on the bandwagon now!

Which Club Is The Best Though?

In what regards? If we’re talking success, then you would have to look at Essendon. Over the 150 year history of the AFL, they have the equal-highest number of Premiership Cups (an honour they share with Carlton) with 16.

What Rules Do I Need To Know? 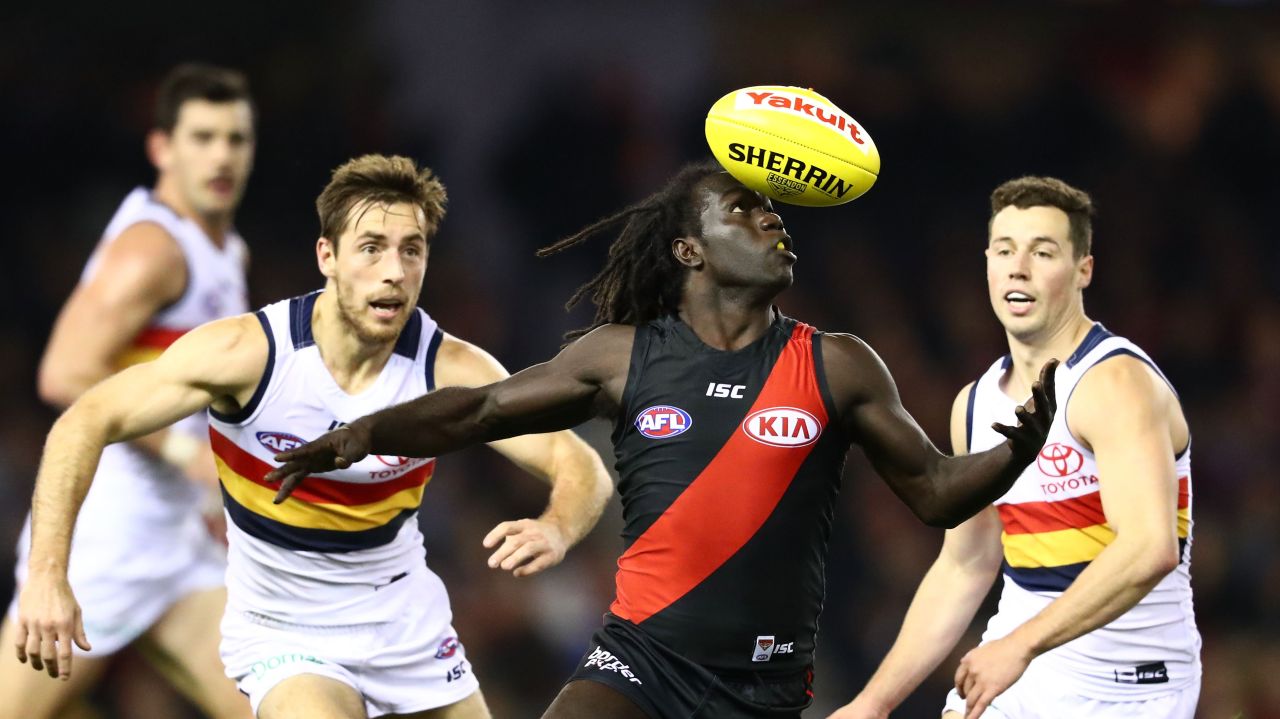 AFL is a complex game, with a rule book that relies heavily on interpretation. So let’s just talk about the things that are absolute certainties.

There are four quarters that last 20 minutes. In between the second and third quarter, a longer break known as ‘half-time’ takes place and the players leave the field. In this time, small children are ushered onto the field and play a condensed version of the game to keep the audience occupied. It’s cute.

Sometimes, if you’re at the ground, there will even be a ‘Kiss Cam’, which focuses on members of the crowd and asks them to display affection toward each other.

The field is oval-shaped and at its points has four vertical sticks. When the oval-shaped ball goes through the middle of the two largest sticks (the goalposts) at either end of the ground, that is called a ‘goal’. It’s worth 6 points.

If the ball passes between the largest vertical stick and a smaller vertical stick, that is called a ‘point’. Coincidentally, it’s worth 1 point. That’s how you score in football. The team with the highest score wins.

When the ball is kicked and a player catches it without it touching the ground, this is called a ‘Mark’. If your name is Mark, things can get confusing. If a player’s name is Mark, it’s even worse. What a mark, by Mark. If the player is being marked by another player named Mark, then it’s impossible to tell what’s going on: “A mark has been taken by Mark in front of Mark. What a mark!”

If the ball is kicked and goes over the boundary line without anyone touching it, then the other team gets a ‘free kick’.

If you throw the ball, that results in a ‘free kick’ for the other team. You can only dispose of the ball by hand with a handball. This is basically punching the ball out of one hand with your other hand.

Tackles can only be from the neck down, but cannot be below the knees. If you are tackled with the ball, you have to get rid of it. If you don’t get rid of it, then you are ‘holding the ball’ and the other team gets a free kick.

This rule is one that you will never get right. Even after twenty years of experience, you will get this rule wrong, over and over again.

What Catchphrases Do I Need To Know?

You scream this whenever a player holding the ball has been tackled by a member of the opposing team. Ensure you drag out the ‘A’ sound as much as possible

When a player is tackled above the neck, that is deemed an illegal tackle and thus is ‘too high’, however, if the player intentionally ducked to avoid the tackle and got hit too high, then you must yell ‘he ducked’

‘Lift’ is an age-old expression that you scream to tell your team they need to put a little extra effort in.

If someone kicks a particularly good goal, use the Australian rhyming slang ‘sausage roll’ to announce your excitement.

Tell the players how to play the game. They love that.

No seriously, tell the players how to play the game.

When the first free kick is paid, make sure you yell this out. Every one thinks it’s really funny because the game has just started and thus, he can’t have been ‘doing it all day’.

Use this when describing a player that you don’t particularly like. This is more disparaging than using swear words. You can also use this if your mate misses his round.

Scream this at umpires when they blow the whistle for a free kick. Extra points to you if they have no hair, because that’s just straight up funny.

When Essendon Bombers player Orazio Fantasia gets the ball, at any point, you must say his name in this manner, where you randomly vocalise the different letters at different pitches. This is in honour of the great Brian Taylor, a fan favourite in the commentary box.

When talented small forward Eddie Betts of the Adelaide Crows is lining up for goal, this chant rings around the oval. You hold the opening ‘E’ for maximum effect. 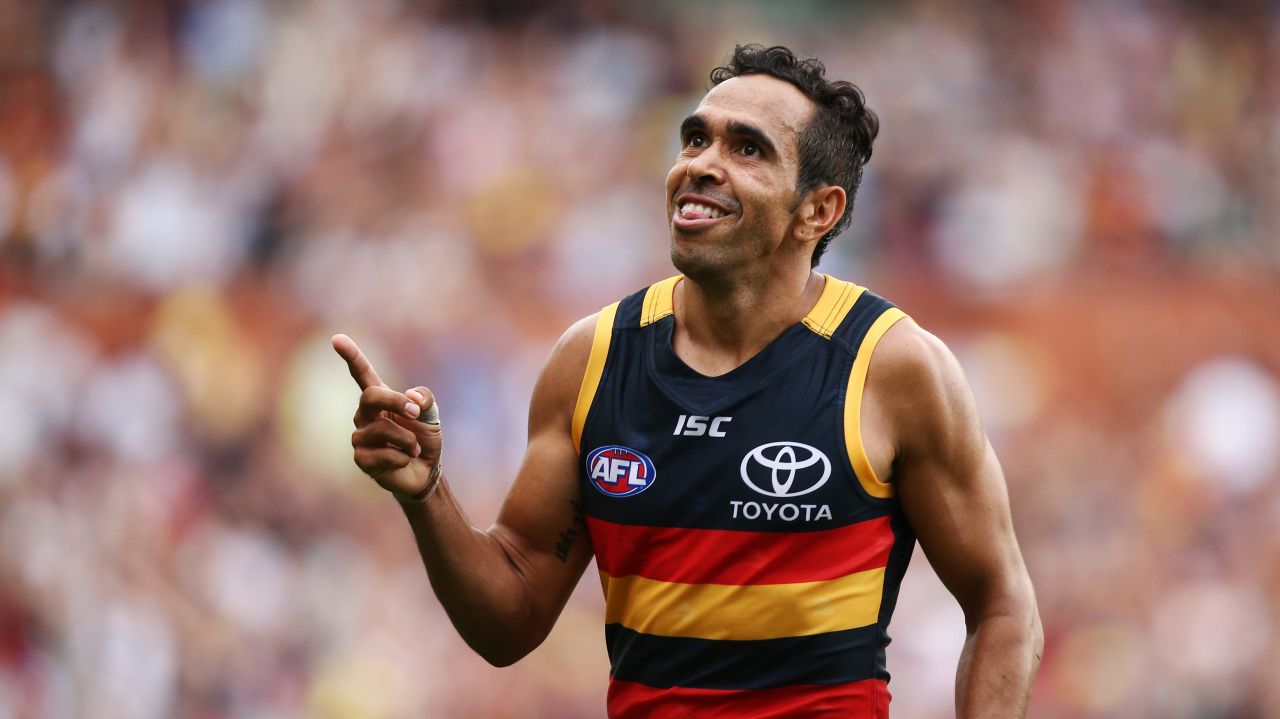 What Does The Winner Get?

Pride. Glory. A giant Cup with their team’s name inscribed on it, individual medals and a tickertape parade through the streets. They also get to party on the Saturday night. As a general rule, the entire team turns up the day after the Grand Final avoiding sunlight and drinking as much water as possible.

How Many People Actually Watch This?

The TV audience for last year’s Grand Final was more than 6.5 million. 99,981 people attended the Grand Final in person, at the Melbourne Cricket Ground, so it is far and away the biggest event on Australia’s sporting calendar – last year’s NRL Grand Final had 83,625 attendees and the A League a respectable 41,546.

How Can I Completely Avoid The AFL Finals, Because I Hate Football

You can’t. It’s inescapable. It’s all-consuming. The best thing to do is memorise a few catchphrases, join in the festivities and, if you’re roped in to actually attending a game, you could always bring a charcuterie board to keep yourself entertained.