Use Oven-Dried, Not Stale, Bread For Better Stuffing 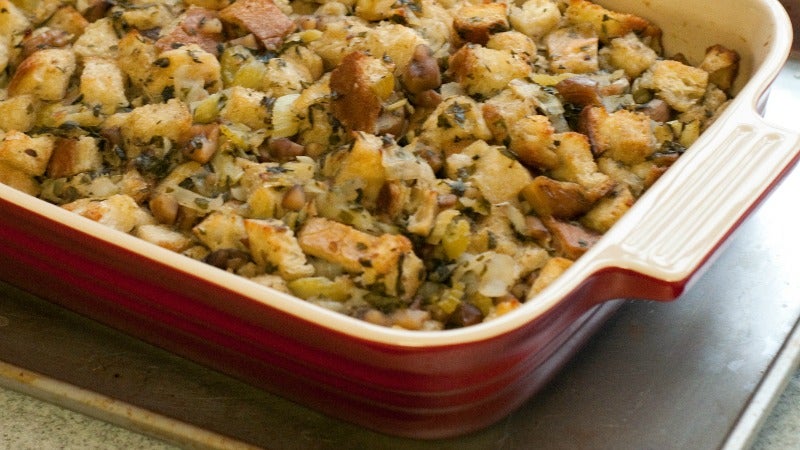 What I’m about to say may come as a shock but you should make your chicken stuffing with oven-dried, not stale, bread.

Before you start playing the angry keyboard bongos, let me explain. The advantages of using dried bread are many. For one, it’s faster. Staling takes a few days, and oven-drying takes less than an hour. And, according to Serious Eats, there are textural issues to consider:

Drying bread is a matter of extracting moisture through evaporation — the crumb’s structure remains intact, but it becomes stiffer and crisper thanks to all that moisture loss. Staling, on the other hand, encourages the migration of moisture from swollen starch granules into airy pockets within the bread. Those starch molecules then recrystallize, yielding a texture that’s tough rather than cracker-y. Worse, that moisture often stays trapped inside the bread’s structure, for a loaf that’s moist and stale at the same time. The result? Leathery, chewy bread.

Dry, not-chewy bread will also better absorb all of those tasty flavours in your stock, resulting in a more flavorful stuffing that’s tender on the outside and crisp on the outside, so it’s a win all around. (Of course, none of this applies to you if you are making cornbread stuffing, which is what you should be doing anyway.)