There are more BitTorrent clients than we could possibly compare, but some of the most popular — and best — have been under the spotlight lately for sleazy ads and bad behaviour. It’s time to check in on a few of our favourites to see how they fare, which deserves your downloads and which ones you can trust.

The world of BitTorrent clients is vast and infinite, but of the most popular apps out there capable of downloading torrents, scheduling downloads, remotely managing those downloads, and more, three apps stand out pretty clearly:

These particular clients are just the tip of the iceberg. They’re some of the most popular, but others, like Deluge (Win/Mac/Linux) and Vuze (Win/Mac/Linux) are also great contenders. We just couldn’t possibly compare them all in a showdown like this. Maybe we’ll pit them against the winner here, or against each other in the future showdown if there’s interest. The bottom line here though is that there are plenty of options, even if you don’t these three — and there are even more options out there if you don’t like any of the ones we’ve mentioned so far.

µTorrent and Transmission Have Histories of Malware or Bad Behaviour 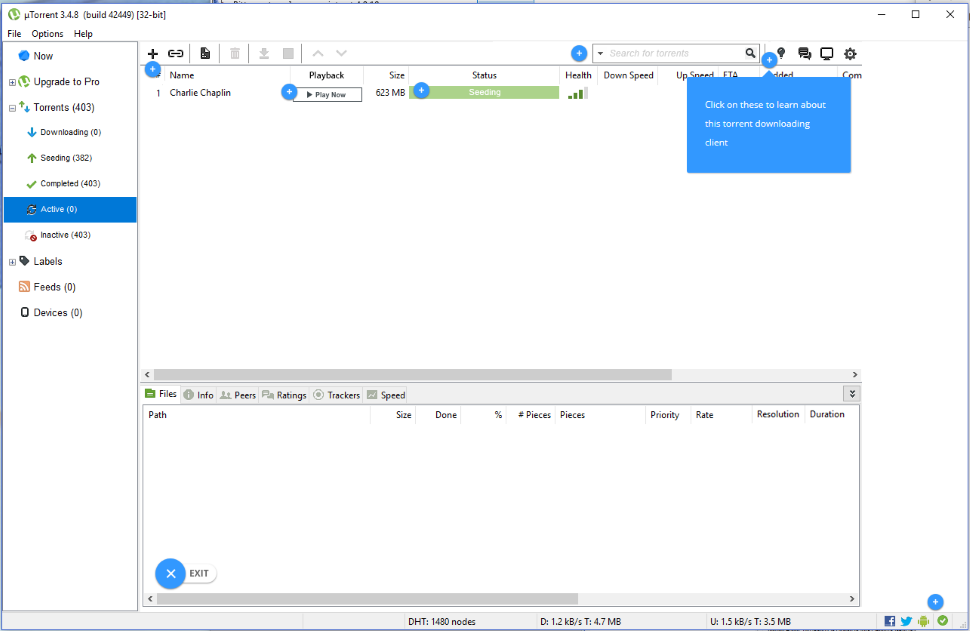 Let’s get this out of the way right out of the gate. Transmission is in this roundup because it’s been — for the second time now — caught distributing malware. This isn’t of its own design or choosing of course — in both cases its more likely that malicious actors injected the malware into Transmission install .DMGs and then uploaded them to Transmission’s own servers, masquerading as legitimate copies of the program for users to download and install. Back in March, the issue was that the installer came bundled with ransomware, and just this week, malware designed to steal a Mac’s keychain and give itself a backdoor made its way into Transmission installers. In both cases, the developers behind the Transmission project acted quickly to remove any malicious downloads, but, well, it’s not a good look (and a good reminder to check hashes to make sure files you download are what the owner promises they will be.

Over on the µTorrent side of things, more than a few people (and private trackers) abandoned the software when they started you definitely mentioned µTorrent, but it came with a ton of caveats, and many of you saying you’d never use a version beyond 2.2.1 (and, to be fair, many of you pointing out that it’s easy to disable the ads, and easier to click “decline” when you install it.)

Of course, malware that will backdoor your machine and steal your passwords or ransomware are both way more serious than adware that just sticks around, makes money off of you, and makes itself annoying — but both underscore a problem with torrent clients, especially the popular ones: They’re either easy targets to get to the myriad computers running them, or they demand tons of time and resources with very little return on that investment, so they desperately try to monetise. In either case, it’s important to be informed of the security and privacy implications of their use, and the historical issues they both have — especially considering they’re two of the most popular clients in wide use.

qBittorrent Offers the Best of µTorrent Without the Bloat 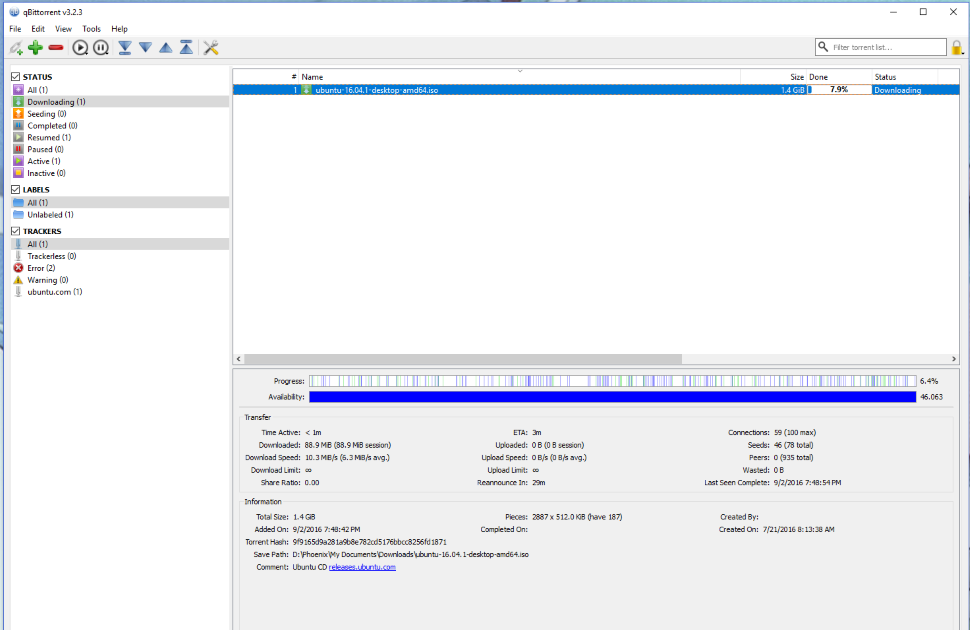 qBittorrent was designed specifically to be the “anti-µTorrent,” in a way. Its feature set is very similar, and the project is completely open source so you could, if you were so-inclined, check out the changes between versions and revisions, and fork the application on your own and make your own contributions to the project. That said, most of us won’t, but it’s nice to know that there’s a community with its eyes on what happens behind the scenes with the project.

Even though qBittorrent was designed to be an alternative to µTorrent specifically, it’s not just a clone. qBittorrent stands on its own, with features like email for completed downloads, web-based remote management (ideal for HTPCs or home servers), built-in search so you don’t have to deal with seedy (and often changing or closing) public trackers, IP filtering for privacy, port forwarding so you don’t have to use the defaults, bandwidth scheduling so you’re not downloading while you’re also trying to game or stream movies or music, and even a torrent creation tool so you can share your own large files using the technology if you want to.

Of course, while qBittorrent is fast, lightweight, and cross-platform, it shines on some platforms more than others (more on that in a moment.) It compares well with µTorrent, since that’s what it was designed to replace, but qBittorrent is more difficult to compare to an app like Transmission. It doesn’t have the same headless capabilities out of the box that Transmission does, and Transmission can be configured to automatically download from folders, RSS feeds, and other sources without your interaction, which makes it ideal for downloading anything you want as soon as its available. It also has command line features to run on linux without a GUI enabled, or remote management — near necessary if you plan to run it on a Raspberry Pi, a home theatre PC, or a network-attached storage (NAS) device. None of this is to say qBittorrent can’t be cobbled into a similar solution, just that Transmission is much easier for that purpose.

Your OS Matters, but Not as Much as Your Use Case

When we say “your OS matters,” what we’re really talking about is your use case. Do you torrent from a Windows PC occasionally, when you need something, or do you run a home server that downloads tons of data for you while you sleep, or while you’re at work? Are you a Mac user, or a Linux user? All of those things matter, but only to the extent of how complicated you need your downloading solution to be.

Transmission was designed for natively for Macs and Linux systems (let’s hear it for GTK+,) with Transmission-QT and a semi-official version for Windows users. Run your own seedbox, or installing Linux on a new home server? It’s possible Transmission is already there, or a few keystrokes away, and you can be sure it will play nice with your system. µTorrent, for its part, probably has the broadest client base, with native apps for macOS, Windows, Linux, and Android, but its features aren’t angled towards headless downloads either. qBittorrent is cross-platform and works well everywhere, but its development priority is on being cross-platform and easy to manage (based around Qt,) not around native clients for any specific platform.

What all of this boils down to is whether you care about the UI, or you need your torrenting app to be a native one. If you’re a casual downloader, you probably don’t. If you’re running your own seedbox and your peers on private trackers depend on you, or you let your server do the downloading and you want something rock solid and reliable without the need to jump in and troubleshoot, you might. Consider your use case as well as your operating system before deciding. Maybe the geeky, super-customised, headless lure of Transmission is too strong to resist. Maybe you just download occasionally — in which case qBittorrent or µTorrent are just fine.

qBitTorrent Is the Leanest, Transmission Is the Most Advanced, and µTorrent Is Good but Hard to Recommend 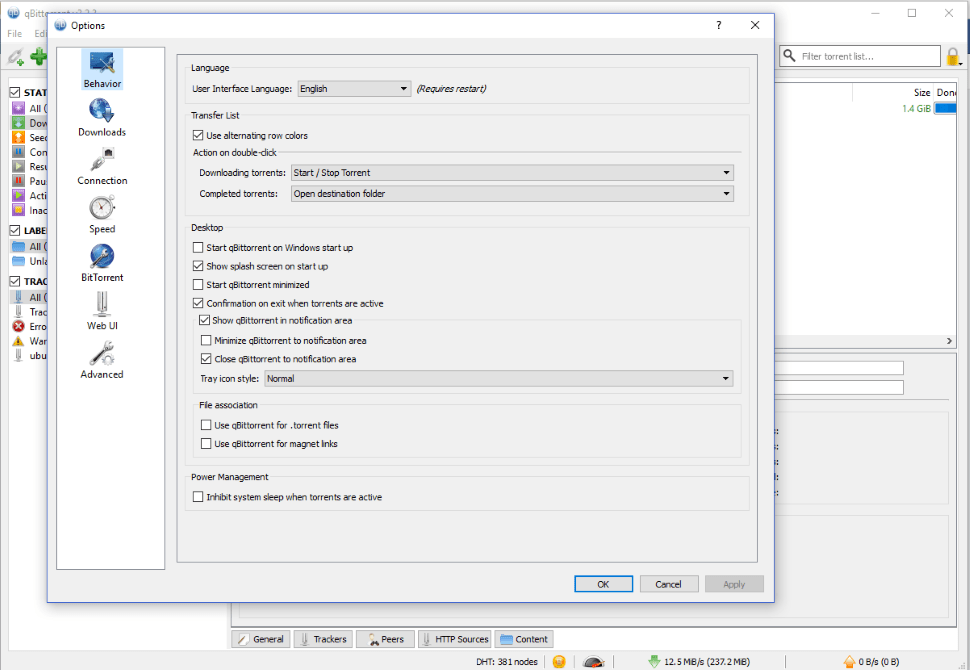 If you’re a casual user, download when you need to and seed when you want to, we’d recommend qBitTorrent. It’s lightweight, easy to install, cross-platform, and super fast. Web-based remote management is great if you can set it up, and its features are enough for even advanced users to download whatever they want, when they want.

If you love open APIs, have a home server and download everything in volume, and subsequently seed a lot of files as well, Transmission is ideal for your use case, assuming you’re using a Mac or you’re running it on a Raspberry Pi or Linux-based system. Heck, Transmission has versions specifically for embedded systems like that NAS or HTPC you’re running, and despite its recent malware scares, it’s still solid. Its development team just really needs to earn back the trust of its user community, which is a difficult thing to do when the same community is also (rightfully) concerned with privacy and anonymity, security, and entirely based on trust.

Finally, µTorrent may be the “standard,” as in, a lot of people use it, but it’s difficult to recommend to someone looking for a new torrenting client. Sure, it works, and it works well. It has features and mobile management apps that the other two don’t. Its UI is sleek, easy to use, and easy to navigate, even compared with qBittorrent, which was designed to replicate the experience. However, it’s tough to tell someone to use an app, but also make sure to decline all the crapware, disable the ads, make sure each new version doesn’t come with something insidious (or wait until the community finds out if it does or not before you install it), and so on. Unless you’re completely happy with the version you have, or there’s a feature you need that’s not available elsewhere, you may want to leave it behind — and if you’re looking for a new client, you have faster, lighter options available.

Still, we can’t choose for you. At the end of the day, all three have their merits, and again, these aren’t the only ones worth considering. Maybe none of these are up your alley and you should check out Vuze, or Deluge, or Tixati, or rTorrent, for example. The bottom line is to always consider your use case and needs, not just what’s popular, and choose something that fits them first.