Sous Vide Showdown: The Anova Vs. The Joule 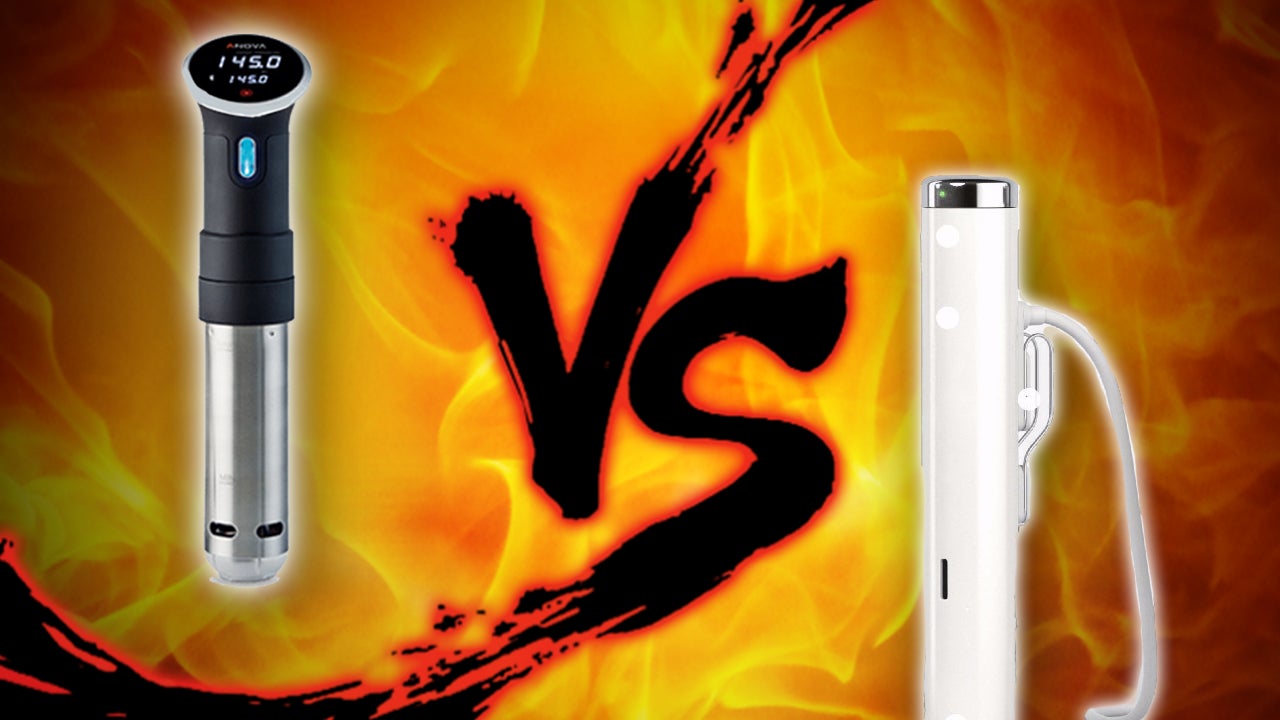 Sous Vide cooking is appealing because it promises restaurant level results in the comfort of your own home. By maintaining a constant, precisely-controlled temperature, you don't have to worry about overcooking expensive steaks or delicate seafood. The previously esoteric cooking method is gaining popularity, and circulators are being designed with the home cook in mind. Picking (and paying for) such a fancy kitchen toy can be a little daunting, but we're here to help. 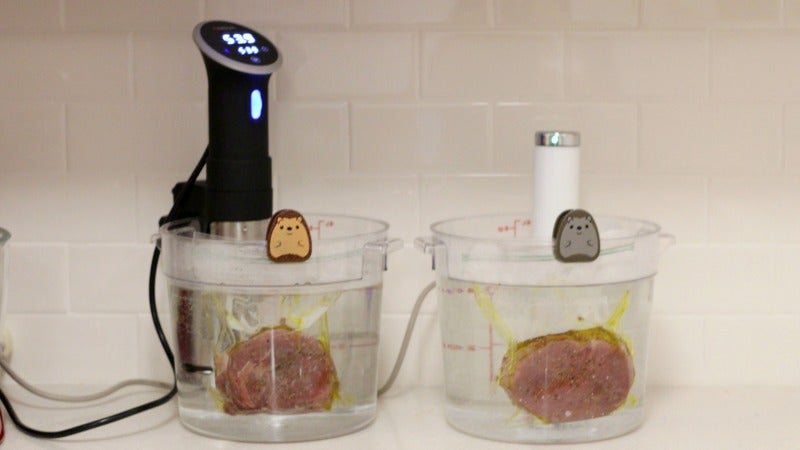 Dueling steaks We'll be looking at two models of sous vide immersion circulators: the current darling and the new kid. (Full-disclosure: I have an Anova, which my mother bought me for Christmas, and I love it dearly. The ChefSteps model I'm testing is the Beta version, sent to me by the company, and — as much as it pains me to do so — I will be sending it back when I'm done testing it out.)

To compare the two devices we looked at their design, functionality, ease of use and storage, and — of course — cooking ability.

The Hardware: The Joule Is Smaller and Mightier, but Absolutely Requires the App to Use

The Joule has the advantage of being the newer unit, and it shows it by edging the Anova out in quite a few categories. It's lighter and smaller, which makes it easier to operate and store, and it just looks sleeker and sexier. (On a scale from "1 to ChefSteps co-founder Grant Crilly," I give the Joule as solid 7.7.)

Though it is small, the Joule is mighty, and that extra 300 watts translates into less pre-heating. To test out just how much less, I heated two buckets of water (4 litres each) from room temperature to 56 degrees Celcius (the temperature recommended for cooking a steak medium-rare). The Joule got there in about 10 minutes, and the Anova took twice as long. The Joule also has a slightly higher maximum volume and a slightly wider immersion range, though the Anova can heat water 16 degrees (F) hotter than the Joule.

All of that being said, I do not enjoy the fact that you have to operate the Joule from the app. I appreciate the techy, "internet of things" aspect of it all, but I am klutzy, forgetful person who often loses, drops, and forgets to charge her phone. Having my sous vide depend so heavily on my phone makes me nervous, as a damaged phone now means more than a damaged phone; it also means I can't use my sous vide. (Plus, there's the fact that there are still people out there who don't have a smartphone or tablet, and that should preclude them from the delicious magic of sous vide cooking).

The Apps: Both Apps Are Well Designed and Get the Job Done

Then there are the apps for your phone. For the Anova, the app (available for free for iOS and Android) is technically optional, and I've cooked many a thing without ever opening it. When it comes to the Joule, you absolutely cannot operate the thing without the app (also free, for iOS and Android, but not until the device launches,) but the app itself is pretty excellent.

The Anova app comes packed with recipes and time and temp guides, including some that were developed and perfected by J. Kenji Lopez-Alt of Serious Eats. For foods that can vary in doneness, like steak or eggs, there are options letting you choose how rare you want your steak and how runny you want your eggs. 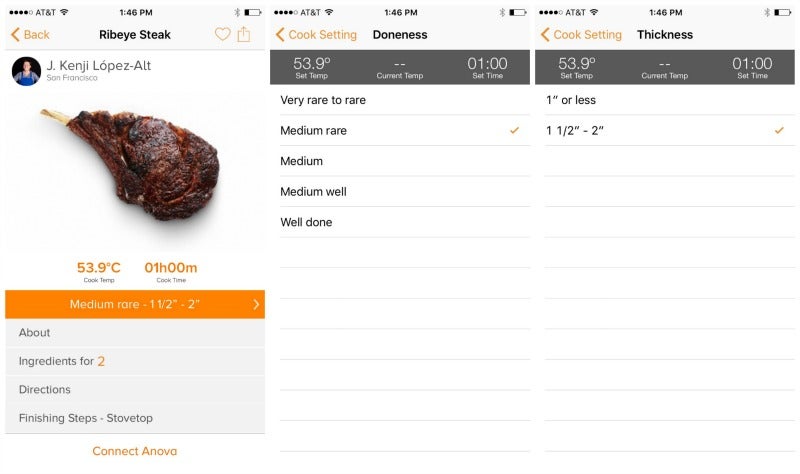 In addition to the Serious Eats guides, there are also a bunch of recipes written by cooks and food writers alike, ranging from limoncello to pumpkin pie.

Like the hardware before it, the software for the Joule is a little sexier too. In addition to letting you set temperature and time based on recipe, the Joule has a "visual doneness" scale for most foods, letting you cook an egg based on how you would like the white and yolk to look, rather than using words. You can also choose "fresh" or "frozen" for your meats, meaning you can chuck a steak in straight from the freezer. 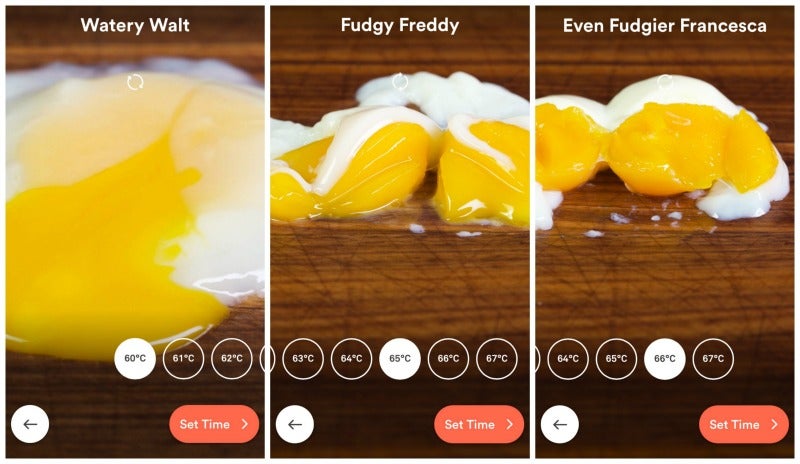 The guides are divided into "basic" and "ultimate," but you can also search by type of food. Sadly, the app doesn't contain every sous vide recipe ever perfected by ChefSteps. To find those, you have to go to the ChefSteps site, which makes some amount of sense, considering how often ChefSteps releases a new sous vide recipe. 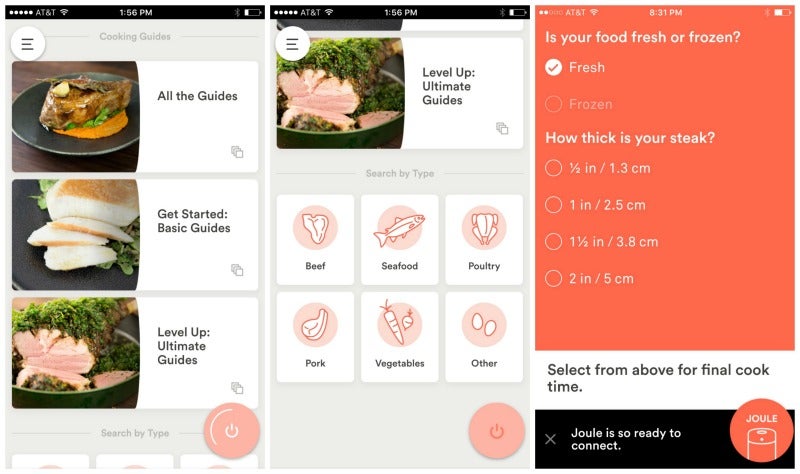 The Steaks: Everybody Wins When Sous Vide Is Involved 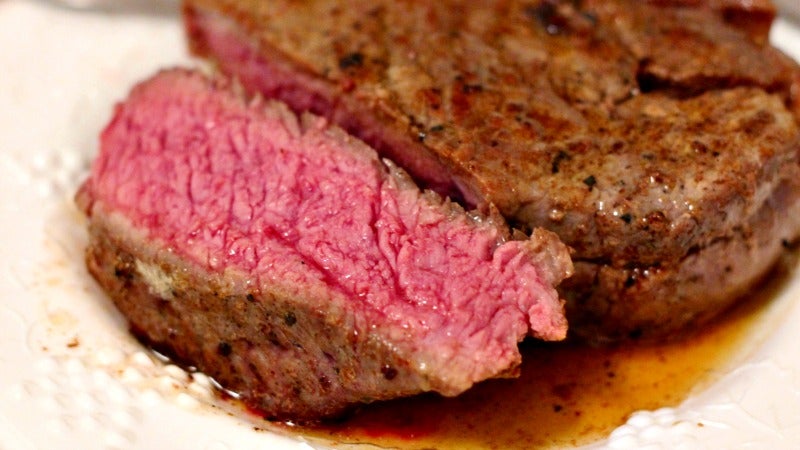 They pretty much both looked like this. Now we get to the most important feature: the cooking. To test out the cooking ability of each circulator — and to give myself an excuse to buy two ribeyes — I cooked two almost identical steaks side by side, following the instructions in their respective apps. (I did however omit the recommended rosemary and garlic, and opted to keep the seasoning simple with just a bit of olive oil, salt, and pepper.)

Both turned out medium-rare and delicious, and were perfectly pink from edge to edge, the steak cooked using the Joule's instructions was just slightly more done than the one cooked using the Anova, but that makes sense when you consider that the Joule has your steak hang out in the water for an additional half hour. I was thrilled with both of them.

The Verdict: The Joule Is Your Culinary Apple to Anova's Microsoft 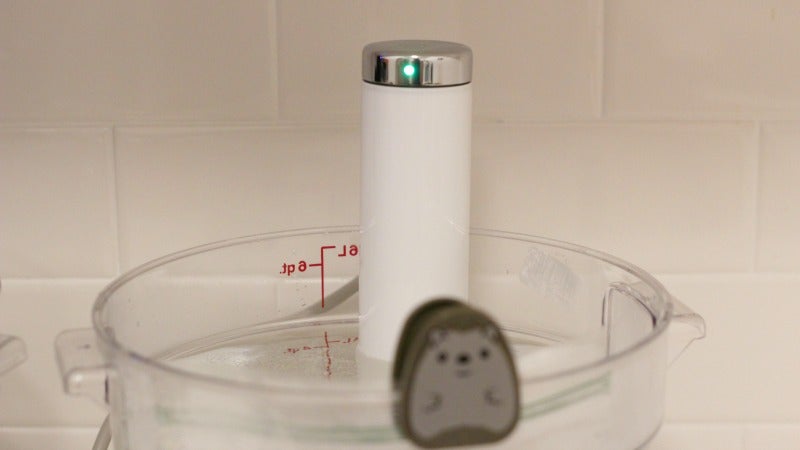 The winner! Here's the thing: both the Joule and the Anova produce beautifully cooked food. The Joule is smaller, a bit more powerful, and a bit easier on the eyes, but it's also a hundred dollars harder on the wallet, so it's a matter of what you want to spend your money on. (Actually, if you get in on the pre-sale, it's only sixteen bucks harder on the wallet, so act fast if you want the Joule.) Basically, the Anova is Microsoft, and the Joule is Apple. The Joule is a bit hipper, the app is a bit prettier and easier to use — and that whole "visual doneness" thing is slick as heck — but the Anova will still get the job done.

It's also worth pointing out that you can use ChefSteps' and Anova's recipes no matter what sous vide circulator you own, though you may have to plug in the temps and times yourself rather than sending them from your phone.

All of that being said, I'm going to have to award the win to the Joule, and not just for aesthetic reasons. The smaller size and streamlined design makes this thing way easier to store and the extra power cuts down on preheating wait times. I'm not going to get rid of my Anova any time soon, but if I was in the market for a new sous vide, I'd get the Joule, especially at that sweet pre-sale price.)