How I Became A Faster Runner

As soon as I was able to run, I wanted to run faster. It’s been a journey with a lot of ups and downs, but it really is possible to start as a slow runner and, well, become a lot less slow. I’m no Olympian, but I’m fast enough to occasionally win age group medals at local races. Here’s my story. Illustration by Sam Woolley.

But first, I want to be clear about something: It doesn’t actually matter how slow you run. At any speed, there will always be someone faster than you and someone slower than you. I knew that, even at the beginning, but I still wanted to be better than myself. I wanted to improve. And for a while, I almost thought that was impossible.

I didn’t play sports as a kid. I hated gym class. One year in high school, we all had to run 1.5km, and the teacher wrote down our times. There were different categories for the faster kids — under eight minutes, and so on. I was in the slowest group: More than 10 minutes. I don’t even know how much more. I never asked. All I knew was, I had failed that test. I figured I was destined to be a slow runner. Or better yet, a non-runner.

I Learned to Run, and Made Exercise Part of My Life

I didn’t even consider taking up running on my own until a few years later, after I’d taken a cardio and then a karate class (to satisfy a university requirement) and ended up joining the karate club. I was gaining endurance and strength, and I liked it. When summer hit, I couldn’t afford a gym membership back home, so I printed out a beginners’ program from Runner’s World (it isn’t available any more, but it’s similar to Cool Running’s Couch to 5K plan), and I hit the road.

One specific road, that is. I ran it every day and turned around at the same place every day, expecting that eventually I should be able to cover the same distance faster. That didn’t happen, but at least I stayed in shape over the summer, which was my real goal.

Running was an off-and-on part of my life for years after that. I didn’t see huge improvements in my speed, but by keeping exercise in my life, I was building a solid foundation to become a faster runner in the future.

I Changed Up My Routine

Why wasn’t I getting faster? It took me years to realise that I was making a big mistake in my training.

All this time, I’d been doing the exact same running workout. I’d head out on a straight road or path for about 2.5km, and then I’d turn around and run home. I’d run these sessions at the hardest pace I could handle, hoping that today would be the day I shave a minute off my time. I was essentially racing a 5K, four times a week, without any variation. There were no easy days, no strength-building intervals and no long runs.

Serious runners — professionals, people on teams, people who are following a training plan — vary their workouts because you get different benefits from each type. Slow runs build endurance, and you keep them slow on purpose so that you can reap the benefits for as many kilometres as possible. Short, quick intervals build strength, and give your lungs a challenge that you don’t get from steady state running.

So I started switching up my program. Some days I still ran my usual 5km, but on others I would head out for 8km or 10km, as slow as I could. And some days I would do a shorter run, maybe 3km, and finish it with a series of 10-second sprints up a steep hill.

That year I entered my first race, a 10K. I covered those 10km at an 11 minute pace: Not bad for a distance that, just a year earlier, I wouldn’t have dreamed of attempting. In my second race, a 5K, I ran the first 1.5km in just 9:17. Even though I slowed down in the rest of the race, I was thrilled: I had finally broken the 10-minute barrier.

I Strength Trained, and Began to Win 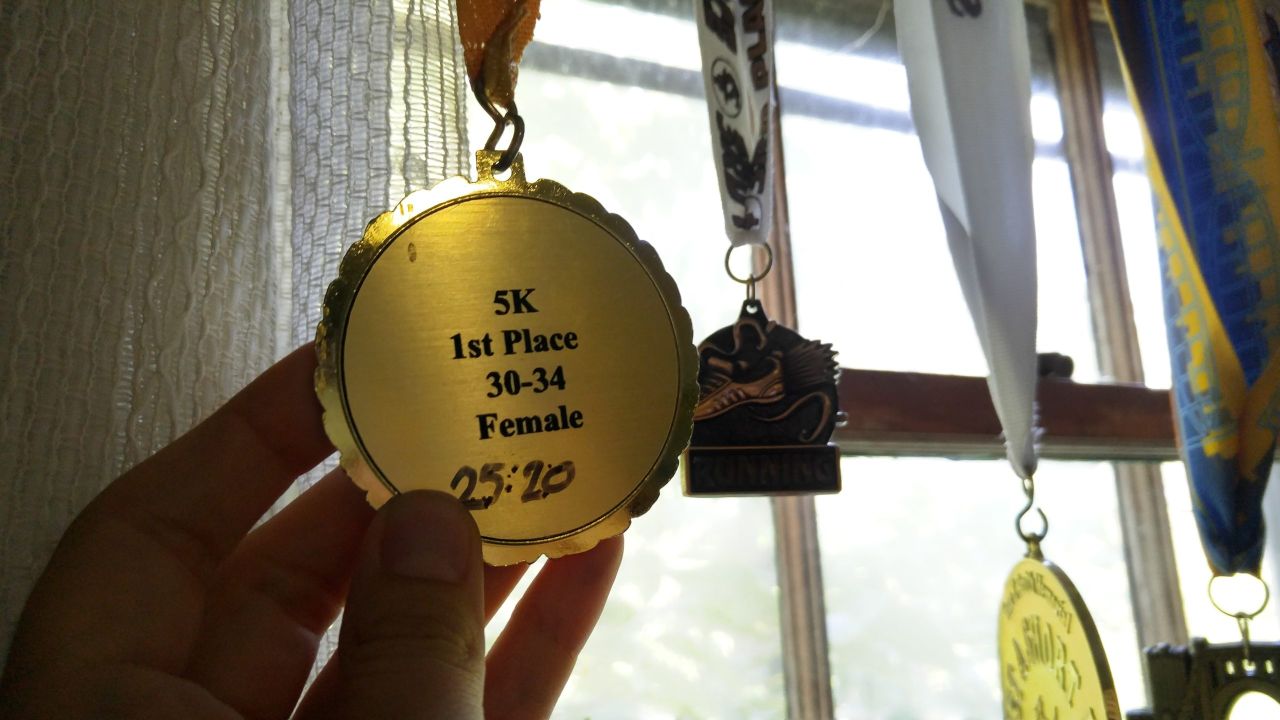 My next milestone came when I was training hard for a different reason: I was playing roller derby, and doing everything I could to be stronger and faster on skates. Running was my go-to for extra endurance practice, and I was also hitting the gym on the regular. I did a lot of squats.

I got stronger and stronger, but I wasn’t really thinking about my running speed. Then, in the spring, my gym buddy announced that she wanted to run a 5K. Sure, I said, I’ll do one with you.

That 5K turned out to be my fastest ever, the record that I still dream of beating. A lot of good things came together that day: It was cold, which actually helps performance. I didn’t give myself a goal pace, but just ran by feel. And I’d been working out for years since my last 5K, so I probably should have known I was due for a new record.

I finished in 25:20. I was standing around eating cookies when the race organisers announced that they were posting results, so I checked out the list, wondering where I ranked among women in my age group. My jaw dropped when I saw the results. I had earned a medal.

Here’s how awards work at this type of race. The first three men across the finish line get “overall” awards, and so do the first three women. Then everybody else is ranked within age groups, usually with a five or 10 year spread. So all the women aged 30 to 34 who showed up that day, minus anybody who got one of those first three medals, were in the same age group. There were 49 of us. I was first.

In the grand scheme of things, my time wasn’t that great, and if I had entered a bigger 5K, there would have been plenty of fast runners to beat me. But among the people running that race, that day, I ranked high enough to go home with some hardware. Was I… a fast runner?

I Learned My Strengths

Just because I can run a fast 5K doesn’t mean I’m a good runner at every distance. I ran a marathon, and a couple of half marathons, and decided that I’m not built, mentally or physically, for long distances. I don’t find any kind of zen in running for hours, like some people do, and my marathon times are nothing special.

The only thing I liked about marathon training was the strength workout day. I did track workouts and hill repeats, which I loved because I could give an all-out effort and know that it would be over in seconds or minutes.

That made me wonder: Was it possible to try a race that was even shorter than a 5K? I signed up for a 2K. That year, I was in pretty good shape, and I downloaded a training plan aimed not at a marathon or 5K distance, but to get me in shape to run a really fast 1.5km. My long runs were never more than an hour, but I was going to the track twice a week to run short intervals.

The result was another first place medal. I felt like I had really found my strength: A distance that I loved, and that I was good at. I was in good shape, and if I kept training the same way, I should be able to get even faster.

And then, a month later, I twisted my knee at roller derby practice and tore my ACL. That led to a surgery with months of recovery time. I hung up my sneakers.

I Didn’t Give Up

It’s been almost two years since my surgery. First I was forbidden to run for three months; then I could run, slowly, but had to skip a lot of other exercises I liked. And shortly after that, I got pregnant. I’ve run while pregnant before, but it’s no fun. I sat this one out.

This wasn’t my first setback, either. During the entire journey I’ve described here, I’ve taken lots of breaks from running. Sometimes I stopped because of a minor injury, but sometimes just because I decided I would rather use that time and energy for a different hobby. I wasn’t able to run in the third trimester of any of my three pregnancies, and I’ve never been able to keep up a running routine when I had a very young baby to take care of.

That means I’ve made a lot of comebacks. I earned that 5K medal after I had my first kid. I earned the 2K medal after my second kid. And now, after knee surgery and baby number three, I’m back in my sneakers, working on beating my time.

Now I know what I need to do to improve. I’ve done it many times, after all. First I make exercise a habit. I put my running or exercise sessions on the calendar, and in the early weeks, I just strive for consistency. Then I pick out a plan to help guide me, so I make sure I’m getting in all the different types of workouts that will help me improve. I also revisit my goals to make sure I’m still headed toward something I enjoy.

Right now, I’m trying to get back to that fast time I ran in the 2K. I started by mixing walking and running, phasing out the walking as I got stronger. Basically, I fast-forwarded through Couch to 5K.

I chose a plan in the Nike+ running app, and since it was geared to a 5K goal, I sprinkled in some extra speed workouts. After two months of hard work, I tested myself again: I’m now down to 8:18. You can bet I’m going to keep up with my training; another personal best is within reach.