Do you want to run faster? Great! Let’s run faster today. Then we’ll take a little break. Then we’ll run faster again a bunch more times. There’s a whole family of these interval workouts that runners call “speedwork”, and including them once a week or so can help you achieve faster race times later on.

Lifehacker’s Running Week is presented by our regular Vitals column, offering health and fitness advice based on solid research and real-world experience.

Speedwork is a key part of a well-rounded running program because it accomplishes things that your other workouts don’t do. Easy slow miles are great for growing more capillaries, which helps bring more oxygen to your muscles, but interval type workouts build strength and sprinting speed, and can be a great way to work on certain aspects of cardio fitness. In short, adding speedwork to your routine can help you get faster and stronger.

You may have done interval workouts before, but runners will talk about particular types of workouts in a specialised lingo, like “Today I’m doing 8×400, wanna come along?” or “Hey, I heard you’re training for a marathon. How’s your time on Yasso 800s?”

In addition to decoding the lingo, you’ll need to know when to do speedwork, how fast to run it, what to do during the times you’re not sprinting, and how to fit it into an overall program to meet your goals.

Types Of Interval Workouts And How To Use Them 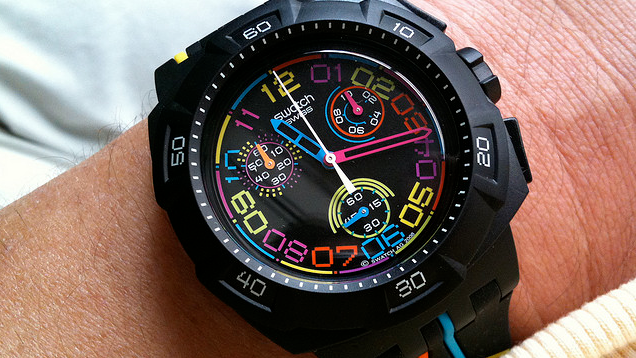 There are only a few parameters to vary in speedwork: How long the intervals are, how many of them to do, and how fast. Here are some common workouts. (Some runners would argue with calling tempo runs and hill repeats “speedwork,” but I’m including them here because they’re interval-based workouts.)

All of these workouts are meant to be done after an easy warm-up (jog, or alternate jogging with fast walking, for 5-10 minutes), and should make up a small fraction of your weekly total. A standard bit of advice is that beginners shouldn’t start doing speedwork until they have been running regularly for a few months.

In between intervals, aim to rest for about the same amount of time you spent running. (Or, if you’re following a program, sometimes it will tell you to rest for a certain time.) Don’t sit down, though: walk between short sprints, and consider jogging between longer intervals.

An important point about speedwork is that it’s possible to run it too fast, and as a beginner, you’ll have to exercise a little willpower to slow down to the right speed. You should run 400m repeats slower than if you were running a 400m race. Think about it: when you run a race, you get to go home afterwards. But after you run your first interval for the day, you still have to run three or five or seven more. So instead, aim to run every repeat at the same speed. That may mean going slower than you think you need to on the first one, but by the last repeat you’ll feel pretty beat.

How fast should you run each type of interval? An experienced runner will have a good feel for her different gears, but to help calibrate your internal stopwatch, try using a calculator like this one as a starting point. It asks for a recent race time. If you haven’t run a race lately, try running a mile as fast as you can (after a good warm-up, of course), and input that as your one-mile race time. Count that time trial as your speedwork for the week — races are tough on your body! The results will give you predicted race times, but if you scroll down, you’ll see workouts based on these. One example is “5 x 400m at 800m pace” — because, remember, 400 metres at 400m race pace would be running a race. You’re running a workout.

How To Use A Track For Speedwork 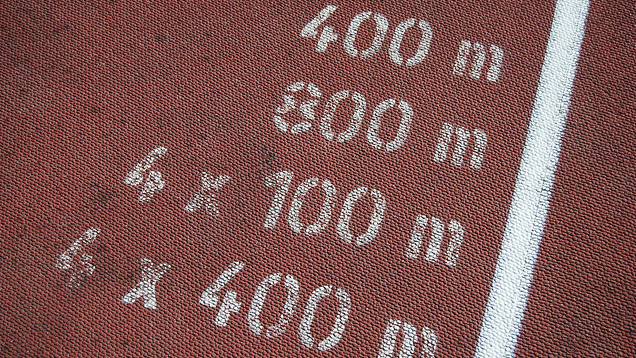 You don’t need a track to get the benefits of speedwork, but a lot of interval workouts (the ones measured in meters) assume you have access to one.

A typical track is 400 metres per lap — that’s almost exactly ¼ of a mile. Four laps makes a mile, then, and if you’re running 400-metre repeats, that’s a lap each. By the same maths, 200-metre repeats are half a lap, and 100s are a quarter of a lap. You don’t need to eyeball those distances, though: they’re marked right on the ground, if you know what to look for. (The lines may or may not be labelled like in the picture above.) Here’s a super detailed guide if you want to geek out, but for most of us, a few facts suffice:

Why aren’t there staggered lines for 400s, then? Because in those longer races, people are allowed to pass each other. As you do your workout, run in the inside lane when you can. If you were to pick an outer lane and stay in it for your whole repeat, you’d actually be running more than 400 metres.

If you want to do a track workout without a track, just figure out about how long it would take you to run each part — maybe you’d run a 400-metre interval in about two minutes. Then you can take to the road and just bring a watch, running for two minutes at a time. You won’t be able to time yourself exactly, but if you know your body well enough to run at the right effort level, it makes for just as good a workout.

When Not To Run Fast 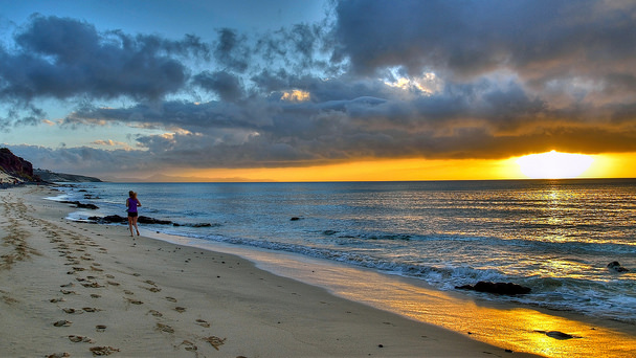 Speedwork fits into a program where you’re running some days easy and some days hard. I’m emphasising this because a lot of beginning runners push themselves hard every time they go out for a run. I get it: you want to see results, so you try to run a little more or a little faster every time, on your regular route. I did this too as a newbie. But you’ll actually improve more if you make your hard workouts harder (the speedwork) and your easy workouts easier.

Easy runs are the kind where you could laugh and talk with a friend, or just get into a groove with your favourite playlist and forget that what you’re doing is exercise. You’re not panting, you don’t feel like you want to die, you almost feel guilty counting it as a workout because it’s easy. You need a lot of those easy runs as part of a healthy, sustainable workout plan.

It takes time to learn to find your easy gear, so if this is a new idea, just try to run as slow as you can and take walking breaks if you need to (but keep them short, so you don’t accidentally end up doing an interval workout).

Find a program that will get you to your next goal. A 5K training plan (like this Intermediate one from Hal Higdon) is a good place to start. You’ll notice most of the runs are 3-milers with no specific instructions; those are your easy runs. The longer runs on the weekends should also be run at your easy pace. And then the numbers on Wednesdays that say things like “5 x 400” — well, now you know what that means, right? Five one-lap repeats, done after an easy warmup, probably at a school track after the kids have gone home for the day. Stick to a plan like that and, in time, you’ll be faster and happier.