All The Coolest Features Of Windows 10’s Anniversary Update

Microsoft’s first big feature update for Windows 10, the Anniversary Update, is out today. With it comes a smarter Cortana, better multiple desktop tools and tweaks that fix annoyances we’ve hated since Windows 10 launched.

Cortana Is Way Smarter, and Can Talk to Android and Windows Phone

Cortana reminds me not to schedule dinner during my plans to see Suicide Squad.

Cortana reminds me not to schedule dinner during my plans to see Suicide Squad.

Cortana on Windows 10 is already pretty useful. You can check your schedule; get answers to simple, spoken questions; find and keep your notes and set reminders. Now it’s getting even smarter. For example, if you add an event to your calendar that conflicts with another scheduled event, Cortana will let you know that you’re about to double-book yourself. Cortana can also interact with other apps to make reservations, or send the document you were recently working on to someone in your contact list.[related title=”More Stories on Windows 10″ tag=”windows 10″ items=”5″]

Cortana can also bridge the gap between your phone and PC, much like Pushbullet before it. With today’s update, It can mirror your Android system notifications to your computer, so you’ll see missed calls, incoming messages and low battery notifications right on your desktop. You can also mirror notifications from any other app you want. You’ll can find instructions on how to get Cortana set up here.

Cortana on the desktop can also talk to your phone. For example, if you search for “Directions to [place],” Cortana will send the directions to your map of choice on your Android device. You can say (or type) “Find my phone” to locate your phone on a map. You can even ring it remotely right from your desktop. Microsoft plans to add more commands over time, so keep an eye on this feature in the future.

Pin certain windows and they will show up no matter which desktop you switch to.

Pin certain windows and they will show up no matter which desktop you switch to.

Windows 10 made managing multiple desktops much easier and more straightforward than it was in Windows 7. It was one of the most underrated and overdue features of Windows 10. Now, it’s getting even better. The Task View interface, which you call up by pressing Win+Tab, now gives you a few more useful options. You can right-click a window to move it to another desktop (previously you could only drag windows from one desktop to another). You can also use the Task View to snap windows to the left and right side of the screen.

Best of all, you can now pin windows so that they appear on all desktops. This is extremely handy for things like messaging or chat apps. While virtual desktops are great for separating workspaces, they can get in the way when there are certain apps you need in every context.

Your Calendar Is Now Integrated With the Taskbar

The calendar is actually a Calendar! What a crazy idea!

The calendar is actually a Calendar! What a crazy idea!

Microsoft’s Calendar app is one of the best Windows 10 universal apps out there, and one of the few worth using. In the Anniversary Update, it’s getting integrated with the system calendar in the taskbar. If you click the time and date in the lower-right corner of your screen, you’ll see a month view of a calendar like normal. Below that, however, you’ll see an agenda of all your events for the day.

You can also add events to your calendar from this panel. Click the plus sign at the top of the Agenda view and the Calendar app will open. Add an event name, time and location. You can also choose one of your synced calendars from, say Google calendar, to add events to from this same panel. If you don’t care about the Agenda view, you can minimise it from the taskbar calendar panel.

I don’t need a quick toggle for VPN, but that Note button is handy. YMMV.

I don’t need a quick toggle for VPN, but that Note button is handy. YMMV.

Windows 10’s Action Center (activated by pressing Win+A) is a pretty awesome tool that doesn’t quite get the love it deserves. Microsoft’s notification overlays can be a bit of a mess, and having all of your notifications in one organised place is a godsend. This panel already has Quick Actions to jump to Settings or activate features like Quiet Hours. Now you can customise which Quick Actions appear in the Action Center, so the ones you actually use are the ones displayed.

To customise Quick Actions, head to Settings > System > Notifications and Actions. At the top of the window you’ll see an array of Quick Action tiles. You can click and drag to rearrange them, or click “Add or remove quick actions” to disable any you don’t need.

You also have finer control over how notifications show up in the Action Center. Scroll down on the same screen and you’ll find a list of apps. Click an app and you can adjust its priority (in order, Top, High and Normal) to determine where it will be positioned in the notification list. You can also customise how many messages each app is allowed to show at once in the Action Center. If you want to tweak how an app delivers notifications, this is the place to do it.

No, Microsoft, I don’t want to update at 10AM on a Tuesday. I want to work.

Microsoft has been infuriatingly stubborn about when updates are applied over the years, sometimes forcing you to interrupt your work to do so. With Windows 10’s Anniversary update, you can set Active Hours, a timeframe of up to 12 hours, during which Windows will never apply automatic updates. Outside of these hours, Windows will still detect whether you’re using your computer before updating.

This should go a long way towards fixing the problem of Windows updates installing right when you sit down to work in the morning, or being nagged to reboot to finish installing updates while you’re trying to work. Now you can protect your productive hours. This doesn’t necessarily mean Microsoft will be less pushy with nag screens, but at least it won’t ruin your workday.

Something a little less eye-searingly blinding, if you please.

Something a little less eye-searingly blinding, if you please.

In the past, if you wanted something easier on your eyes than a screen full of blinding white apps, you could edit the registry in Windows 10 to enable a hidden dark theme. After you’ve installed the Anniversary Update, it’s a simple settings switch:

The change should take effect immediately. You’ll now see the dark theme on any app that supports it. In my experience this only seemed to work on Windows 10’s built-in apps like Settings, Calculator and Calendar. Other apps like Dropbox, VLC, Wunderlist and even Microsoft’s own OneNote were unaffected, but that’s likely because they haven’t been updated to support the new theme yet. A Bash shell and Windows together? What is this, a crossover episode?

A Bash shell and Windows together? What is this, a crossover episode?

If you’ve ever used any Unix-based operating system, you’re probably aware that Windows’ command line is much different than the command line anywhere else. The Anniversary Update releases you from your terminal prison. Now you can install the Bash shell.

The Bash shell comes from a joint effort between Microsoft and Ubuntu developer Canonical. It supports the full range of commands you’re used to and you can create and run Bash scripts within the app that run natively in Windows. You can even use apt-get to download binaries. You won’t be able to use any of those tools in other command line environments like the normal DOS-style interface, nor can they interact with other Windows apps, but it’s better than nothing. If you’re not familiar with all the things you can do in a Bash-style command line, check out our primer here.

Microsoft’s Edge Browser Finally Gets Extensions and On Demand Flash

Edge has a few extensions, but not many. For now.

Edge has a few extensions, but not many. For now.

Microsoft is trying desperately to get back in the browser game. Windows 10 brought the brand new Edge browser, completely rebuilt from the ground up after burning down Internet Explorer. While it’s had a promising start, it was still missing some key promised features like extensions. In the Anniversary update, that finally gets fixed. Sort of.

For starters, Microsoft Edge finally has extensions! A whopping… 13 of them. While they include a few highly desirable extensions like Adblock Plus and Evernote’s web clipper, it’s a pretty meagre selection. Microsoft has promised that developers will be able to easily port their Chrome extensions to Edge, but we’ll need to wait and see how many actually do it.

Edge is also finally getting the coveted click-to-play Flash feature that Firefox and Chrome users have grown used to. The browser should automatically detect what content is important and play things like videos, while blocking ads and junk plugins. If you want to play a particular piece of Flash content anyway, you can click each one individually to make it work.

Power users who like pinned tabs should also feel a bit more at home. You can now pin certain tabs in Edge so they will take up less space in the tab bar. They will also all come back when you restart the browser, even if you choose “Close all tabs” when you quit Edge.

Finally, Microsoft has also added support for web notifications. Some sites now ask if they can push notifications directly to your desktop when you first visit the site. Edge will show a dialog box at the bottom of the screen asking if you’d like to accept web notifications. When you do, they will appear in the notification center built right into Windows. 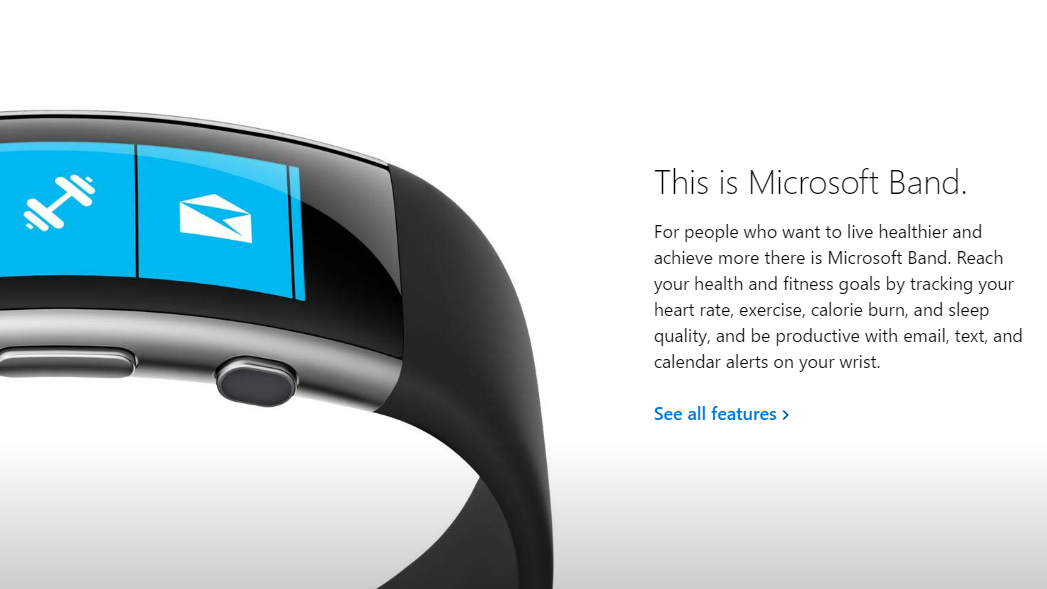 Soon, you’ll be able to unlock your phone with this. Or your phone, I guess. That’s probably easier.

Soon, you’ll be able to unlock your phone with this. Or your phone, I guess. That’s probably easier.

With the new update, Microsoft is adding new ways to unlock your PC with what it’s calling “companion devices”. These include Windows or Android phones, but it also extends to wearables like Microsoft’s own fitness tracker. You can use these devices to verify that you are who you say you are and bypass a password or PIN. Here are some of the ways you’ll be able to log in with these devices:

Keep in mind that all of these are hypothetical use cases that Microsoft supports in its Windows Unlock guidelines, but there’s no guarantee that your specific device will work with it. If you’re interested in a simpler way to unlock your computer, you may want to consider adding a Bluetooth dongle or NFC adaptor if your computer doesn’t already support either technology.