Why ‘Feel The Burn’ Is Bad Fitness Advice 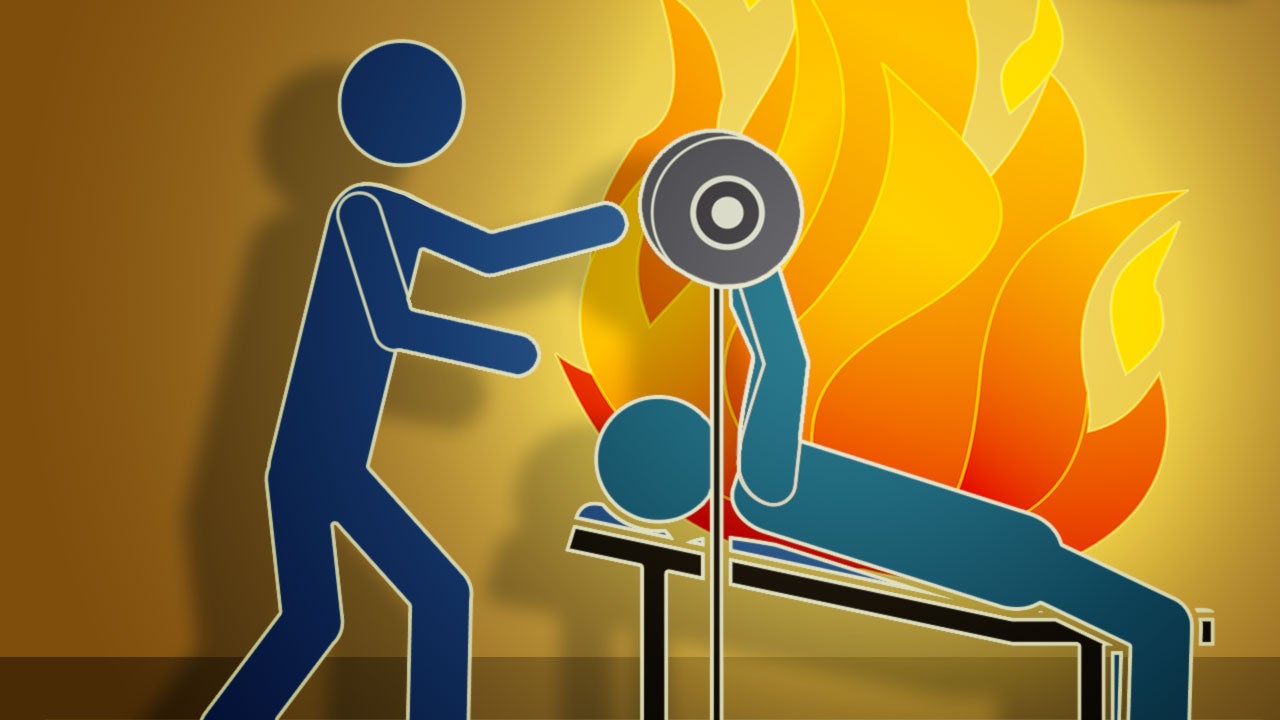 “Feel the burn!” is an oft-repeated cue to get exercisers to work harder and longer than they normally would. A good many relish in this uncomfortable feeling, but depending on the circumstances, this “burn” isn’t always a reliable indicator of a good or effective workout. Here’s what’s going on and why “feeling the burn” is overrated.

The commonly held belief is that this burning sensation in your muscles stems from the buildup of lactic acid (scientifically-termed lactic acidosis), as a result of doing really hard exercise that leaves you gasping for air, like high-intensity interval training; or in some cases, high-rep weight training. For many years, lactic acidosis was indeed the classic explanation for why muscles fatigued during intense exercise, but more recent evidence argues that the explanation just doesn’t hold up.

The first mix-up is that lactate, not lactic acid, is created in the body. We tend to use them interchangeably, but the difference is in their chemical structures. And despite the strong correlation between exercise intensity, lactate levels and declining exercise performance, lactate itself hasn’t been shown to be the direct cause of “the burn” (and eventual muscle fatigue). In fact, some researchers are exploring other explanations that vindicate lactate.

For instance, this study published in the Journal of Applied Physiology shows that lactate on its own does not greatly contribute to muscle fatigue nor impact the muscle’s ability to continue working. What’s going on then? One explanation by this neat paper in the American Journal of Physiology suggests that during intense bouts of exercise a completely separate reaction that happens alongside energy and lactate production increases levels of hydrogen ions in muscle cells. The accumulation of hydrogen ions makes things more acidic and contributes to the burn that some of us glorify.

Then, like the crazy twist in a good movie, the once-scorned lactate actually delays, rather than promotes, muscle fatigue by helping remove hydrogen ions via lactate’s formation, and lowering the muscle cell’s acidity. In essence, without lactate building up, your muscles would actually fatigue even faster.

So, it turns out that lactate isn’t the bad guy we once thought; just a misunderstood compadre.

Why ‘The Burn’ Doesn’t Actually Help

Oddly enough, fitness tends to create this confounding love-hate relationship with discomfort (excessive sweating, fatigue, soreness, “feeling the burn” and so on) and eventual reward.

While the burn can quickly go from being uncomfortable to downright unbearable, you’d be surprised by how many people intentionally seek this feeling. It works to keep them exercising, sure, but it’s essentially a harmful feedback loop that perpetuates the misguided notion that exercise should be punishment. (Spoiler: It’s not.) #Fitspiration mumbo-jumbo aside, using such metrics to gauge the effectiveness of your workout is just a very unproductive way to work out anyway. JC Deen, frequent Lifehacker reference and personal trainer, points out:

If you go for the burn just to feel like you’ve gotten a good workout, then it’s pointless without an established goal. For example, if your focus is maximum strength gain, then it’s probably a bad idea since these types of sets/reps [intense high-rep training] will drastically cut into your ability to recover and continue working out.

We’ve already challenged the myths that blame lactate itself for both the muscle burn and that post-exercise soreness, or delayed onset muscle soreness (DOMS). It’s important to note that in some cases, intentionally making your muscles burn doesn’t even lead to the soreness that is generally related to muscle damage, growth, and repair. In fact, we know that we are more likely to get sore from eccentric muscle contractions (think running downhill or the lowering portion of a bicep curl), without any noticeable burning in the muscles during them.

Sure, you might like to use the burn to help you (poorly) figure out how hard you’re working, but here’s a better way: the Rate of Perceived Exertion (RPE) scale. With the RPE scale as outlined in our article, you grade your effort and intensity in the gym from 1-10, with ratings 7, 8 and 9 having minor tweaks that can make a difference in how much you hold back. The scale isn’t perfect, but it provides better guidance for helping you modulate your workout intensity based on how you feel, rather than simply running yourself to the ground every time.

Plus, if you get super sore or feel miserable all the time, you might end up being discouraged from wanting to work out again, or have repeatedly lacklustre workouts after.

Where ‘The Burn’ Actually Helps

Certainly, there are times when feeling the burn can be useful, like when you really want to feel those muscles working and contracting properly (the so-called mind-muscle connection), increase your muscle size, and improve your general fitness with methods like high-intensity interval training (HIIT).

Interestingly, newer research on lactate such as those collected in this review article in the The Scientific World Journal finds lactate to be a versatile and viable fuel source that a variety of cells in the body uses — not only during times of insufficient oxygen, as many people once thought either; lactate is used for moderate to intense levels of exercise, and even while at rest. As you continue to push yourself to the point of higher lactate levels and your fitness improves, your body makes the necessary adaptations to be better at taking up more lactate and using it (and other fuel sources) for energy.

Next, we know that muscle growth depends on a number of factors, the most important of which are, according to hypertrophy researcher Brad Schoenfeld: muscle damage, metabolic stress and mechanical tension. In simpler terms, think of the post-workout soreness, the burn and the sheer effort of lifting some big-arse weights, respectively.

Further, Brad wrote a review article in Sports Medicine that examined metabolic stress and its many potential mechanisms for making your muscles grow, noting that if you want to build bigger muscle and be able to handle more in general, there’s something to the idea of pushing yourself through the burn. (To be a little pedantic, Brad is alluding to a bodybuilding term called “the pump” that’s similar but not quite the same as feeling the burn.) JC says that “it can be good feedback that you’re creating the muscle damage necessary to induce [muscle] growth and adaptations you want.”

“It’s a good idea to go for the burn, only if it makes sense within your program and there’s a goal,” adds JC. Some of these things that make sense include higher rep training, HIIT, circuit training, supersets, and so on.

Know When to Push and When to Back Off

If you’ve got a lot of life stressors, feel burnt out from a lack of sleep or rest, are already working out a ton, or have prior injuries, then you’ve nothing to gain from constantly trying to push your muscles to their limits. The real objective of a workout should not be to make your muscles burn; it’s to establish consistency and habits that will make actual long-term changes to your body and mind. This way, you can train more frequently, enjoy the benefits of exercise and be less miserable.

Remember that our bodies are not machines with a specific input and output. Your fitness will be just fine without constant muscle burn or soreness in the short-term. What’s more important is that you adequately recover from your workouts to help you toward your short- and long-term fitness goals.