I'm Hank Driskill, Tech Supervisor Of Big Hero 6, And This Is How I Work 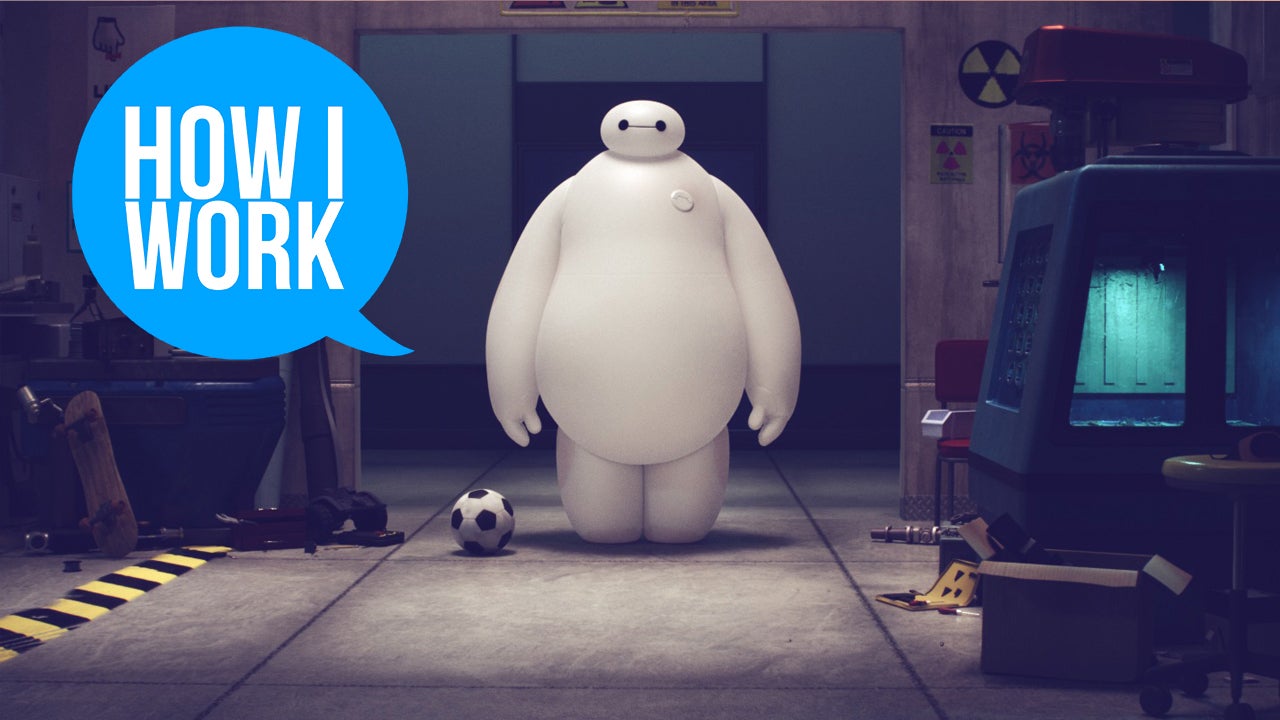 It takes an army to make a film — especially an animated film in which every aspect is made from scratch. And contemporary animation is often tied to the technology behind it. Walt Disney Animation's most recent movie, Big Hero 6, is a prime example of the symbiotic relationship between story and technology.

Overseeing much of the research and development that bolstered the unique look of Big Hero 6 is Hank Driskill. With new rendering processes like Hyperion, which allowed the creative team to light the dramatic new city of "San Fransokyo" in a way that would have been prohibitively processor intensive, to the development of the city itself, based on the actual property data of San Francisco, Big Hero 6 pushed it's research and development teams to create the bridges they needed to cross.

We spoke with Hank to learn more about how he guided the development of such technologies, helped to put them in effect, and how he works.

What does a technical supervisor do?

What version of Linux? I assume you're using Linux because of software related to the production?

Big Hero 6 was made on el64. We use Linux for a lot of reasons; it's a solid workhorse OS that scales very well for the things we do.

What apps, software or tools can't you live without?

Gmail and Gtalk. A lot of our jobs are communication and coordination.

About a 50/50 split between computer graphics books and toys and action figures fill my whole office. Other than those... two computers sharing two monitors, standing desk, chairs and couch for informal meetings.

I'd love to [provide a picture], but they're getting ready to remodel our area of the building and all my stuff went into boxes this past week, so I can take it home while they're moving us all around and then bring it back when the dust settles. :)

The iPhone and iPad are glued to me, from when I wake up until I'm asleep at night... they're a huge win for keeping me connected so I can help people as quickly as possible when they need me.

I keep my notes and todo lists in Notability on my iPad, synced to Dropbox.

Why Notability, as opposed to other note-taking apps?

The enlarged writing area makes my horrible handwriting look reasonable when shrunk down, the document management is nice for lots of documents, and the syncing makes it easy to pull up my notes on my desktop box later.

I'm constantly on phone, tablet and computer. For my free time? PS4 and Apple TV. Destiny and Mordor have both been fun, and this past weekend I spent getting to know Assassin's Creed: Unity. :)

I'm good at juggling lots of technical thoughts... I've just always been good at keeping lots of thoughts going at once.

Usually silence... sometimes I'll get in a mood and listen to alternative or classical.

I read everything Marvel and DC put out each week, and a few Image and others on the side. I'm a huge Marvel Cosmic fan, and I was loving Guardians of the Galaxy until they killed Rich Rider recently (my favourite Marvel character). Now I'm in mourning.

I'm an introvert in how I get my energy... but I often have to act in an extroverted manner for my job.

I sleep about four hours per night, usually midnight to 4am or so.

Do you even maintain that four hour sleeping schedule when not working?

I do... it's just how I'm wired. I sleep midnight-4am even on weekends. Made it easy when the kids were little, they knew when they woke up they could just come downstairs and I'd already be up, they didn't have to bother Mum. :)

You work with both very artistic people, as well as very technical people. Does the way you communicate change when you're talking with different departments?

Somewhat, I suppose... there's certainly a short-hand when talking to deeply technical people... but the core driving force here isn't "technical" or "non-technical," it's the realisation that the place is filled with top-level talent who really feel driven to make the best movies we can make. Working with people whose brains work differently is part of what I love about this place, you get different perspectives on problems and that new insight can really fuel innovation.

How are the creative challenges of making an animated film different from the technical challenges?

The creative challenges always center around story, there's a strong (mostly self-imposed) pressure on us to make films that deserve the Disney name on them, and the story and visual development teams get the brunt of that early on. They're constantly revising and re-iterating on nuanced story points to make each bit perfect... and then it goes into the hands of the cinematographers, modelers, look artists, riggers, animators, effects artists and lighters, and they in turn try to also make each bit perfect as it goes from idea to realised frame.

From the technical side, our job is one of optimization, a lot of the time. We sometimes have to say "no" to their ideas, to do the time cost/benefit analysis on innovation, figure out where best to spend our time to get the most beautiful imagery possible up on screen. We try our best to optimise render farm usage, disk space utilization, and babysitting tools that represent ideas still in their infancy, it's a lot of "duct tape and baling wire" every step of the way.

It's rarely in conflict though. It's easy to remember that both sides are pushing to make the film amazing, so even when there's friction it's all in service of that.

When you enter a new work environment, make friends with the administrative assistants first. They can make your life MUCH easier or MUCH harder.