You Should Bring This Pickle Salad to Your Next Picnic

A couple of months ago, I found a snack that changed my life. It was only three ingredients — super tart cornichons dipped in crème fraîche swirled with honey — and it was chaotically good.

I eat it fairly frequently, and happily, but I recently began daydreaming about playing around with the format. What if, instead of a dippable snack, we chopped the pickles, switched up the proportions, and made the whole thing into a scoopable, munchable salad?

This hypothetical sounded pretty good to me, a noted pickle enthusiast, but I worried it would be polarising to anyone without my, uh, sensibilities. But after a bit of tinkering, I have to say I think this is a picnic salad that would be more than at home next to a pile of any kind of smoked meat, on a ham sandwich, or even on a burger. (It’s good on its own, if you are the type of person who thinks a meal of pickles is reasonable and good.)

The “dressing” is almost too simple. Sour cream, with just a little bit of honey whisked in, clings to the pickles, tempering their acidity with fat and sweetness. Sliced red onion adds crisp pungency, and herbs freshen up the joint. 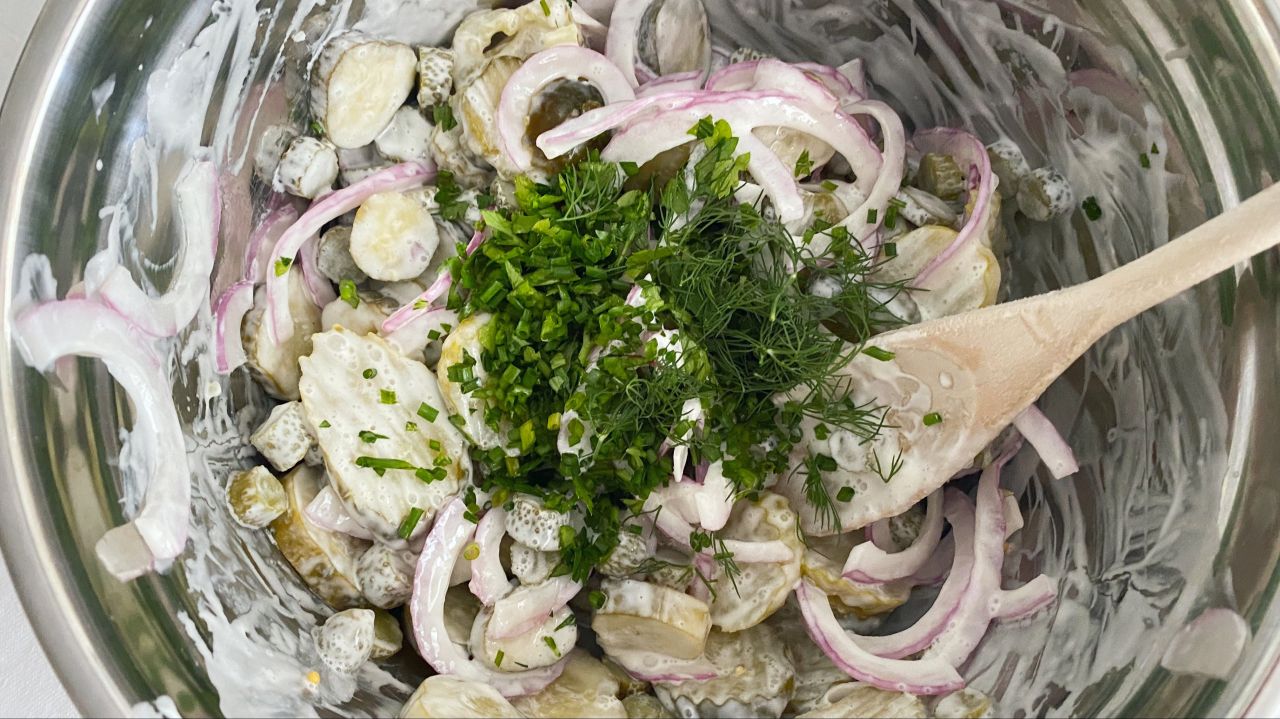 If honey sounds weird to you, grow up! That little bit of sweetness is key. Without it, the salad feels unbalanced and aggressive, and no one likes an aggressive salad.

You can use a mixture of any pickles you desire, but try and get at least three different flavours in there. For my pickles, I went with a combination of cornichons, classic Clausen’s, and a “Sweet Heat” pickle from Mt. Olive. (Half-sours would have been good too, but I am currently riding out the Portland heat wave at my parent’s house in the country and could not find half-sours at Safeway.)

If your pickles don’t come sliced, take care not to chop them any thinner than 1/4-inch. You want them to crunch, not drape, so keep ‘em a little hefty. (Slice your onion thin, however — drapey onion is really nice in this context.)

Slice your pickles if they need slicing, and add them to a mixing bowl, along with the sliced onion. In a separate, smaller bowl, whisk the sour cream and honey together, then toss with pickles and onions. Add all herbs except one teaspoon of chives and toss once more, then transfer to a serving bowl and garnish with remaining chives. This salad is good immediately, but will do fine sitting in the fridge for a few hours. (Much longer and things get a little too soft, though would still make an excellent burger topping, now that I’m thinking about it.)