Make the Pervert’s Magic Shell With Chocolate and Duck Fat

There are two distinct types of Claire Lower blogs: Those that contain normal, helpful, explainers and fun little tips (blogs you can send to your mum without explanation); and those that are a little bit fucked up. The latter is easy to spot. Such a blog will have a headline that makes you go, “I bet Claire wrote this,” before you have a chance to click and see the byline. This — a blog in which I tell you how to make a duck fat magic shell — is one of those.

It’s no secret that I’m a somewhat of a hedonist, and a little bit of a pervert. My two favourite topics to write about are food and — when they’ll let me — old porn, though I’m actually not a fan of mixing the two. (I’ve never understood the appeal of chocolate body paint or the whipped cream bikini. Sticky. Disgusting.) Still, there is no denying that this dessert topping which, again, is made with duck fat and chocolate, smacks of sexual perversion. It takes a sick genius to come up with such things, and I am that sicko (yes…ha ha ha…yes!)

Perhaps “genius” is too strong a word, because it’s kind of obvious if you think about for just a second: The classic DIY magic shell is made with coconut oil, an oil that is solid at room temperature and hard when chilled in the freezer. Duck fat is a little softer at both of those temperatures, but still quite solid when frozen, so I figured a one-to-one sub would suffice.

I was right. Making a duck fat magic shell didn’t require any fancy engineering. All I had to do was replace the 2 tablespoons of coconut oil with 2 tablespoons of duck fat, and chuck it in a large Pyrex measuring cup with 200 grams of dark chocolate. I microwaved it in 30-second bursts, stirring in between each, until it was melted and smooth. Then I poured it on some vanilla ice cream. 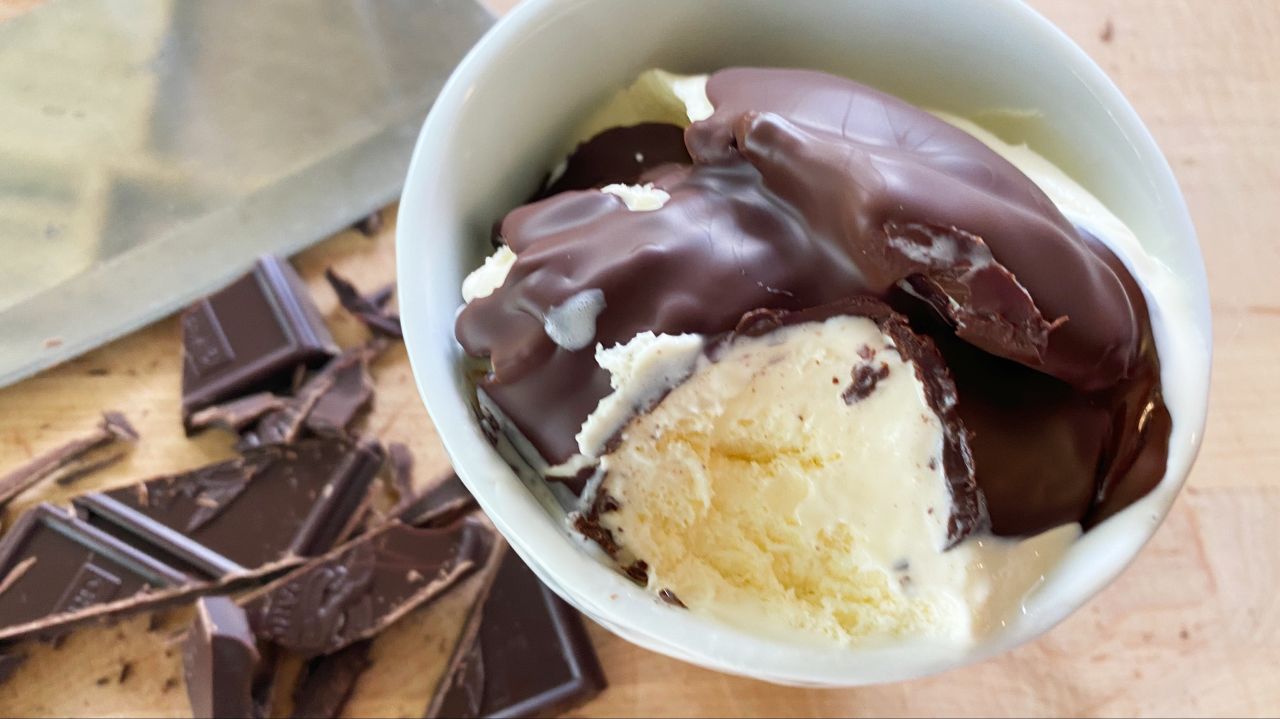 I liked it, which is why I’m telling you about it. It was deep, dark, and chocolatey, with a subtle, savoury smokiness. It was also very rich, and it was the richness that was most prominent. Had I not known this shell was made with duck fat, I don’t know that I would have been able to place it immediately, or at least not until I let a large shard of it melt on my tongue. “That’s duck fat,” I mumbled as it softened on my palate. “That’s decadence.”

The duck fat is most noticeable when the sauce is still in its liquid form. I dipped a pretzel in it and it was outstanding, and quite savoury. Right now I have some duck fat magic shell-dipped potato chips setting on some wax paper. I’m not sure if they will harden entirely but if not, that’s OK. I still fully plan to use this sauce as a chip dip.

Perverted? That depends on your world view, but it’s definitely delicious.