Actually, You Should Roast This Duck Instead of a Turkey

The initial idea was breathtaking: We had grandiose visions of under-appreciated birds being cajoled up other under-appreciated birds’ back ends. We called it the Gooduckail: A quail, stuffed into a duck, stuffed into a goose. It took 53 text messages to get there, and it was only once we realised that we would be two omnivores amongst a coven of vegans that we acquiesced that 17 kg of meat was likely too much. We flew too close to the sun.

“What if we just made a duck?” my fellow meat-eater inquired.

“That would be twice as good, I suspect.”

And readers, it was. I have, in the course of my lifetime, made infinite turkeys that could grace the cover of Martha Stewart Living. I have brined and salted and smoked and fried and basted, and in one case, traversed the streets of Rome desperately begging any butcher for just one bloody tacchino to make for my Italian friends so they could appreciate American tradition colonialism. But in the end, it was always still turkey — a subpar bird, at best.

Fuck it, I say. Make a duck instead.

Duck isn’t a difficult bird, unless you make it so. If you’re someone with a 23 step turkey plan, then you’ll find a way to complicate a duck. But you don’t have to. 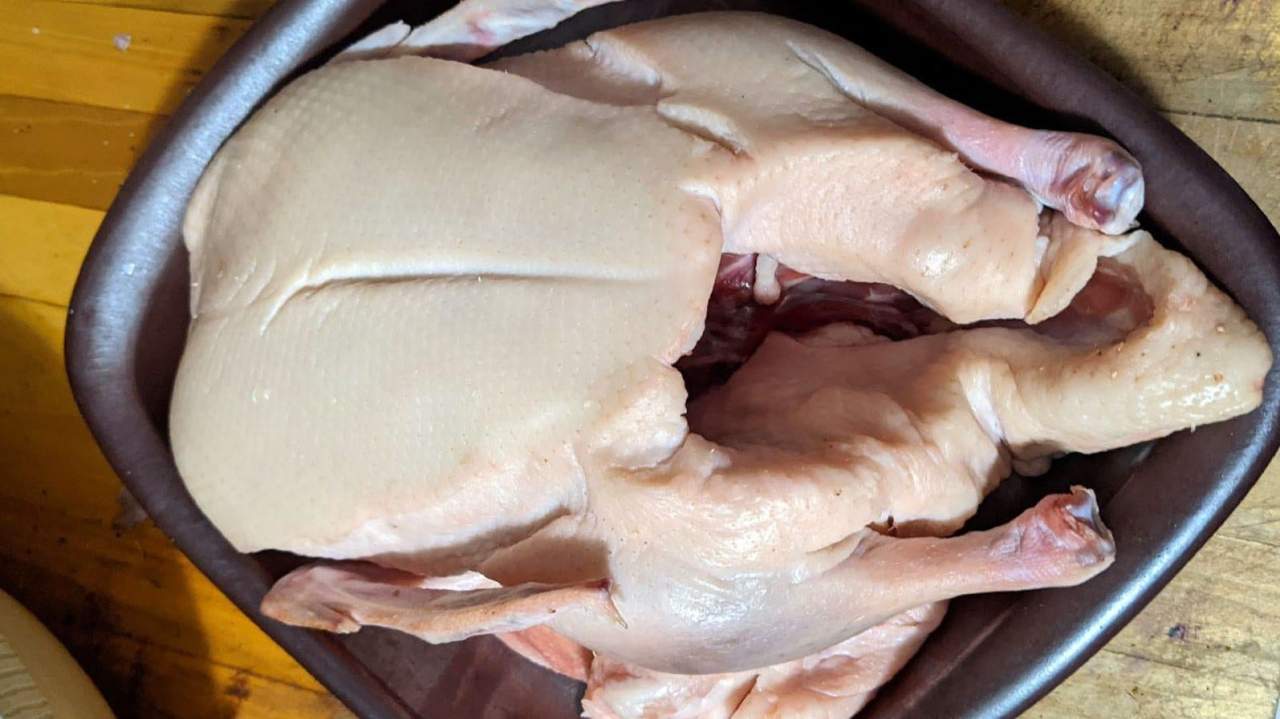 Ducks are smaller, so there’s an advantage in not needing to feed a crowd. You still get the benefit of a beautiful bird on the table. Even better, you won’t miss the mashed potatoes when you get a hold of these duck fat roasted spuds.

And that’s the real trick to this recipe: Instead of messing around with elevated racks and so on, we’re using the potatoes as the rack, and letting the duck fat drip down and cook the potatoes.

This is the time of year to get ahold of a fresh duck, but if it’s frozen, defrost it using the same method as a chicken or turkey. Defrost it in the fridge over 4-5 days, or in the sink overnight.

Preheat the oven to 180°C. Dry the duck with paper towels by patting it all over inside and out.

Now, the potatoes. Wash them, and then slice them into ¼-inch thick slices. Toss them with 1 tablespoon each of salt and pepper, and then layer them into the dish. The neater you do this, the more potatoes fit. You want more potatoes. Set the dish aside while you make your duck cuts.

Use a very sharp knife to execute the most difficult part of the gig: Make some slits through the skin of the duck, but NOT the meat. Start by going in lightly, and adding pressure until you get through the skin. You don’t have to be artistic about this — these slits are there to help the fat escape, not aesthetics — but you can follow the pattern in the photos. Mostly, you just want to ensure you get good coverage with these slits. 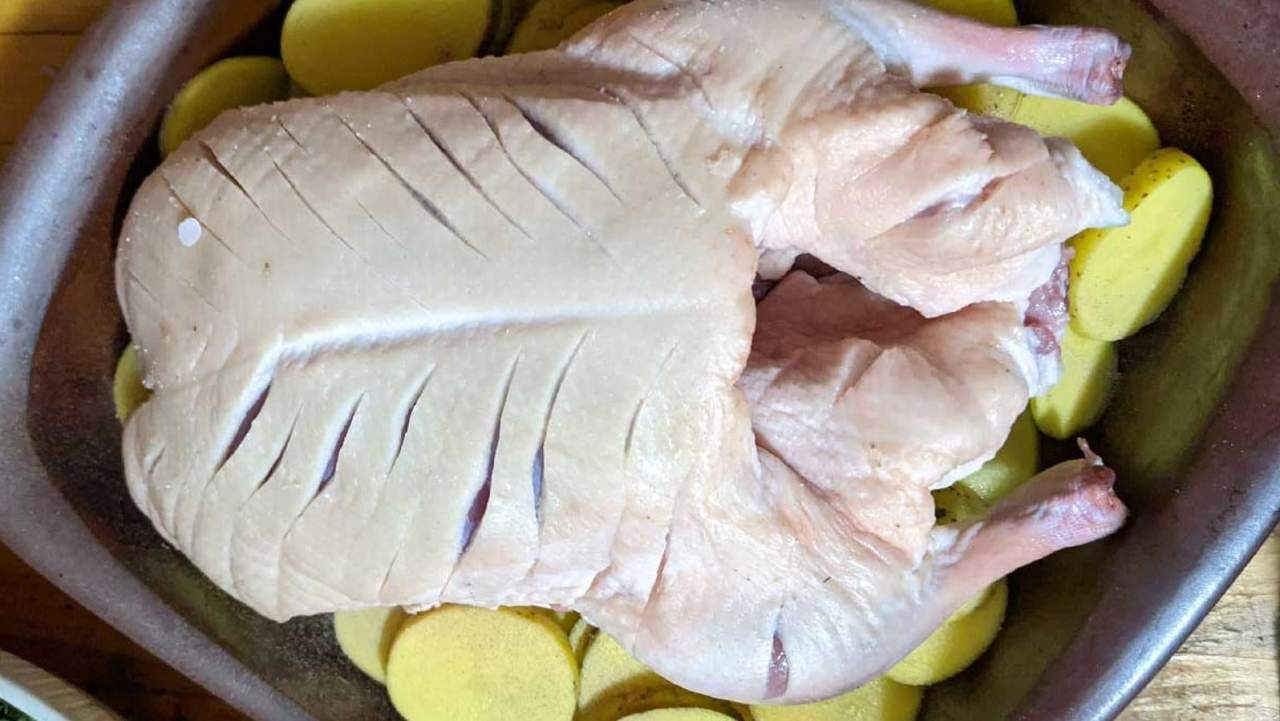 Now it’s time to season this spectacular specimen. In this case, I really like the combination of Chinese Five Spice and cherries, which we’ll add later. Season it liberally with salt, pepper, and Five Spice by rubbing it all over the skin and inside the bird.

We’re going to make this thing cook a little more efficiently by making it less floopy (not a word, but you understand), because by condensing the mass into a tighter piece of meat, it cooks more evenly. You can do this all kinds of ways — trussing it with butcher’s twine, using toothpicks, etc. I’ve have always loved these doohickeys used to lace up the cavity while securing the legs. While you’re at it, break the “shoulder” between the bird and the wings. (You’re not taking it off, just snapping it out of the socket.)

Position the bird on the potatoes, breast side up. Tuck the wings under the bird, which should be easy because you broke that joint. 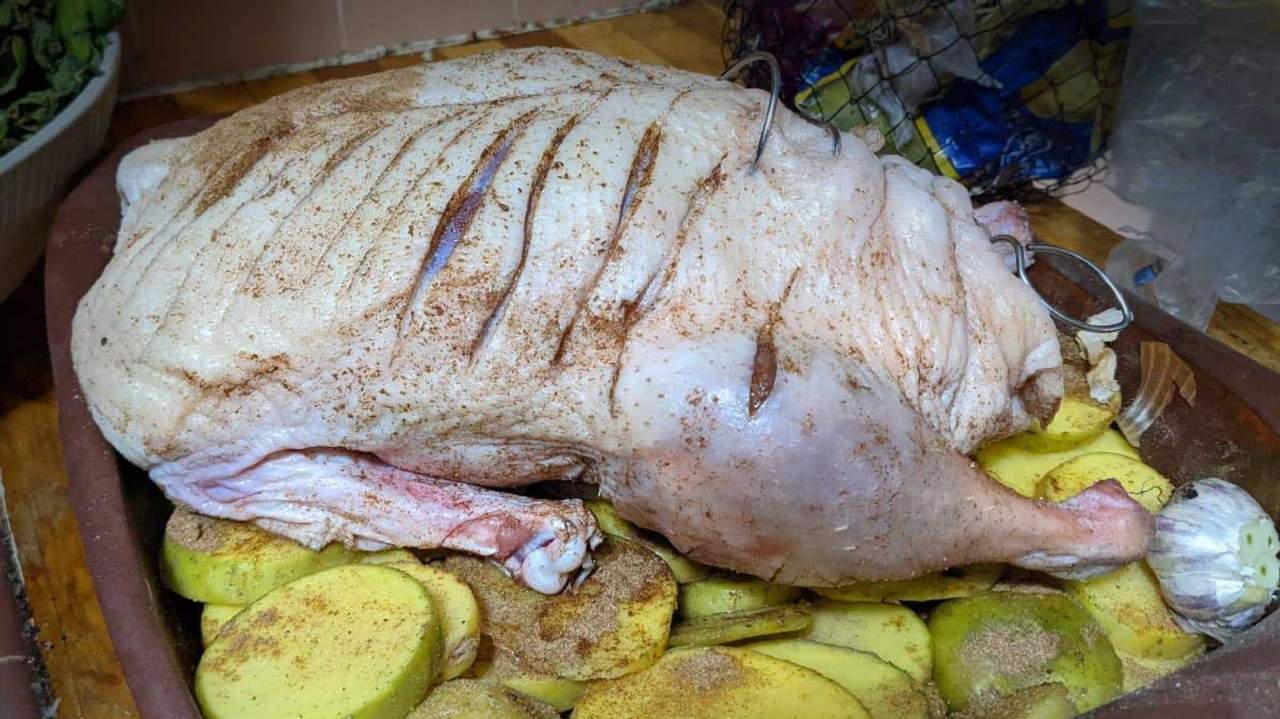 While it’s cooking, we’re going to make a glaze. Chuck the cherries into a pan on the stovetop. Bring the heat up to medium and add the molasses, the soy sauce, and the vinegar. Allow the mixture to bubble, but you’re looking for a simmer while stirring constantly, not a boil. Allow it to simmer while you continue stirring for 10 minutes, then turn the heat off and let it sit.

When the two hours are up and your duck is at least 80°C in the thigh, paint the duck with the glaze (I use a silicone brush, and it’s one of my favourite kitchen tools because you can clean it) and then cook for 10 more minutes. 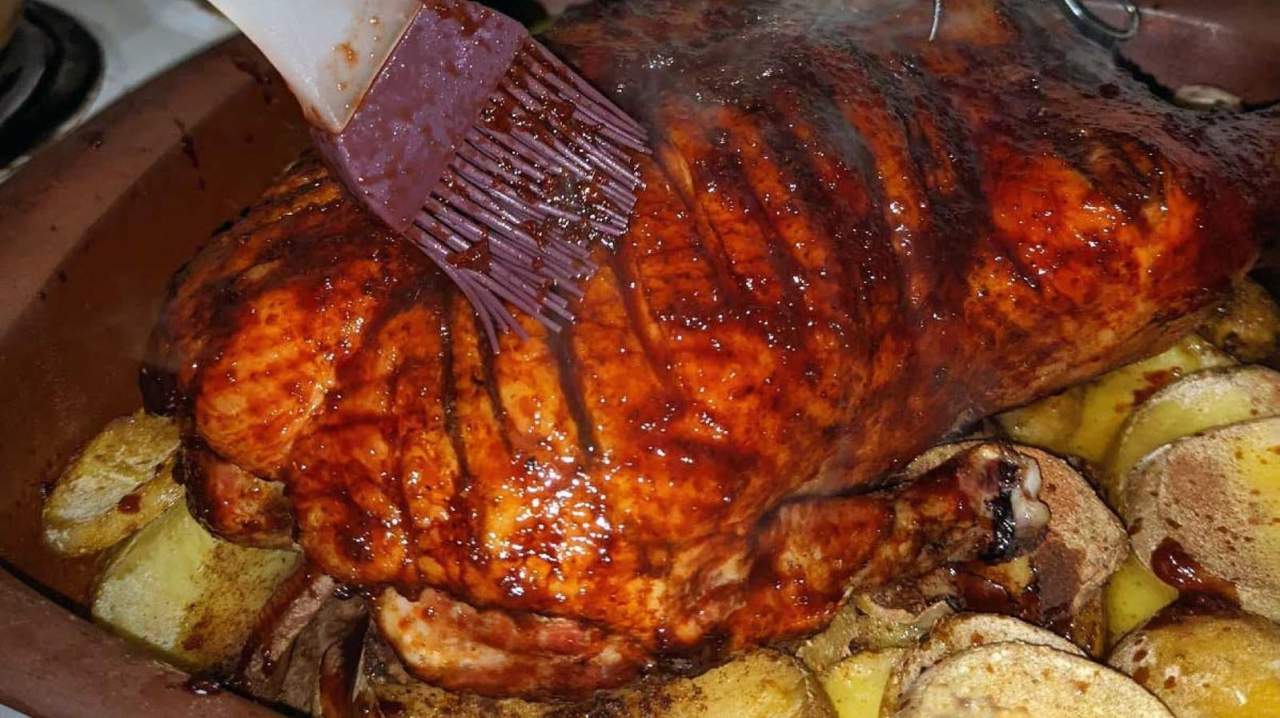 Remove the dish from the oven and let the duck rest for 15 minutes. If you want crustier potatoes, you can (carefully) remove the duck from the pan and transfer it to a carving board, then return the dish of potatoes to the oven, under the broiler for five minutes to crisp them up (just make sure you watch carefully). They’re delicious even without this step, though. Serve the rest of the glaze as a sauce, combining it with pan drippings, or on its own.

You can riff on this combo by using other fruit and spice combos — peach sauce and cinnamon, allspice, and nutmeg; smoked paprika, garlic powder, cumin, chilli powder, and dry mustard with mango; blackberry and hoisin with salt, pepper, and cumin. Your sauce just needs a fruit, a sweetener, and a vinegar to balance it all. Try some stuff out. Find what you like. No matter which fruit or what spices you use, I think you’ll find you like duck a lot better than turkey.