You Should Smoke Out Your End of Season Garden Veg

In each gardener’s life, there will come a time when you are just throwing shit in jars and are ready to be done. You’ve eaten warm ripe tomatoes until your heart burned, you’ve started handing armfuls of green beans to passersby, and you’ve accepted the fennel just isn’t going to bulb this year. That time is (checks calendar) Oct. 8.

The trouble is what to do with the garbage leftovers. The 1 kg cucumbers hidden under leaves, the arsehole tomatoes that are only half ripe, and the micro-peppers that have not lived up to their promise.

I’ve got your answer: I’m hot for smoked gazpacho. 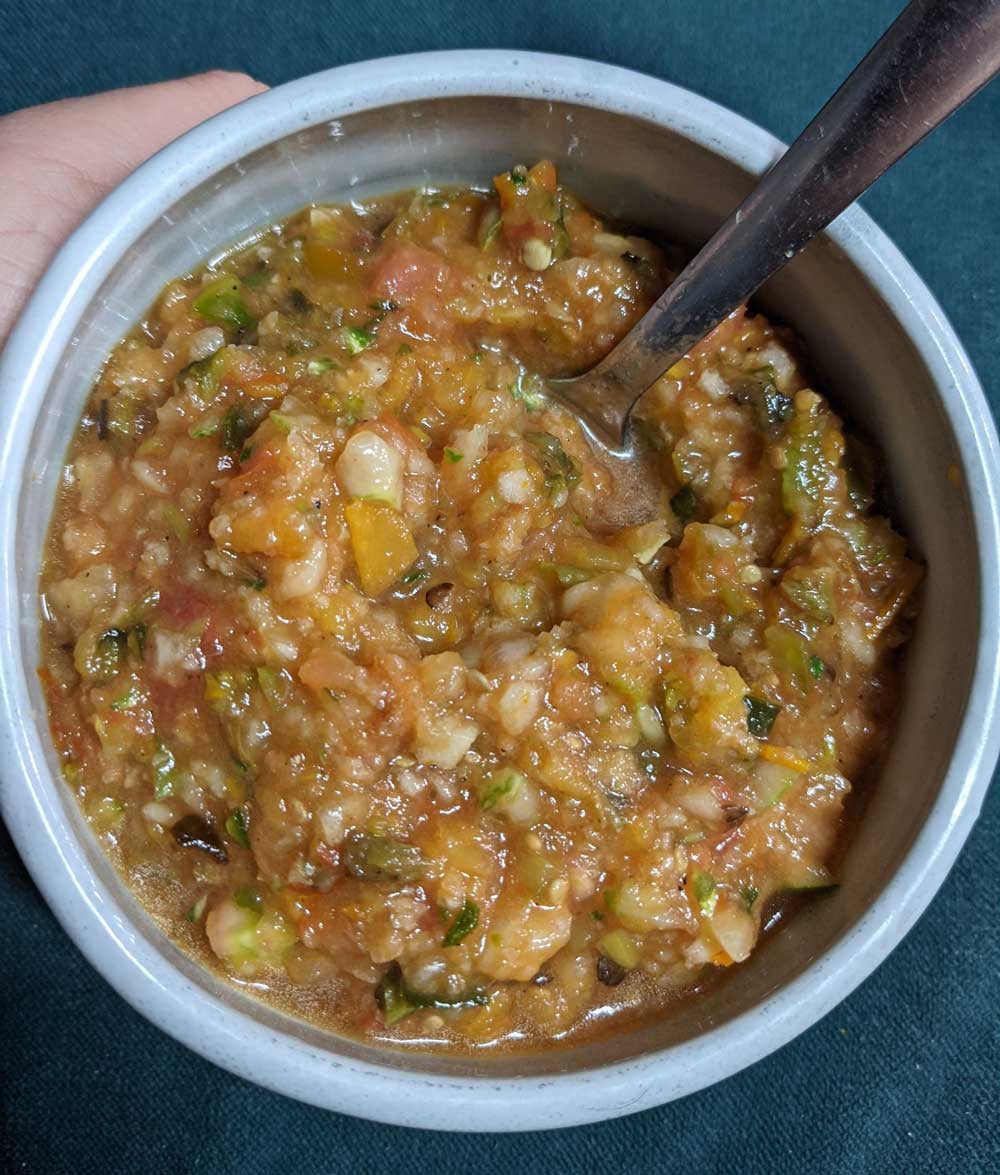 Look at it. LOOK AT IT. (Photo: Amanda Blum)

Take your underripe bullshit tomatoes and bring them inside to ripen for a bit. I do not generally advise this process during the summer, but now, it’s time, and we’re going to cover our sins with smoke. Toss those puppies in a paper bag with a banana and sit back for two or three days.

How to smoke those summer vegetables

Once they’ve hit a decent redness, light the BBQ. I use a gas grill and set one burner to low, so the temp stays under 100 degrees Celsius. On a charcoal grill, you’ll want to use very little charcoal, and keep it on one side; you’re not looking for direct heat. 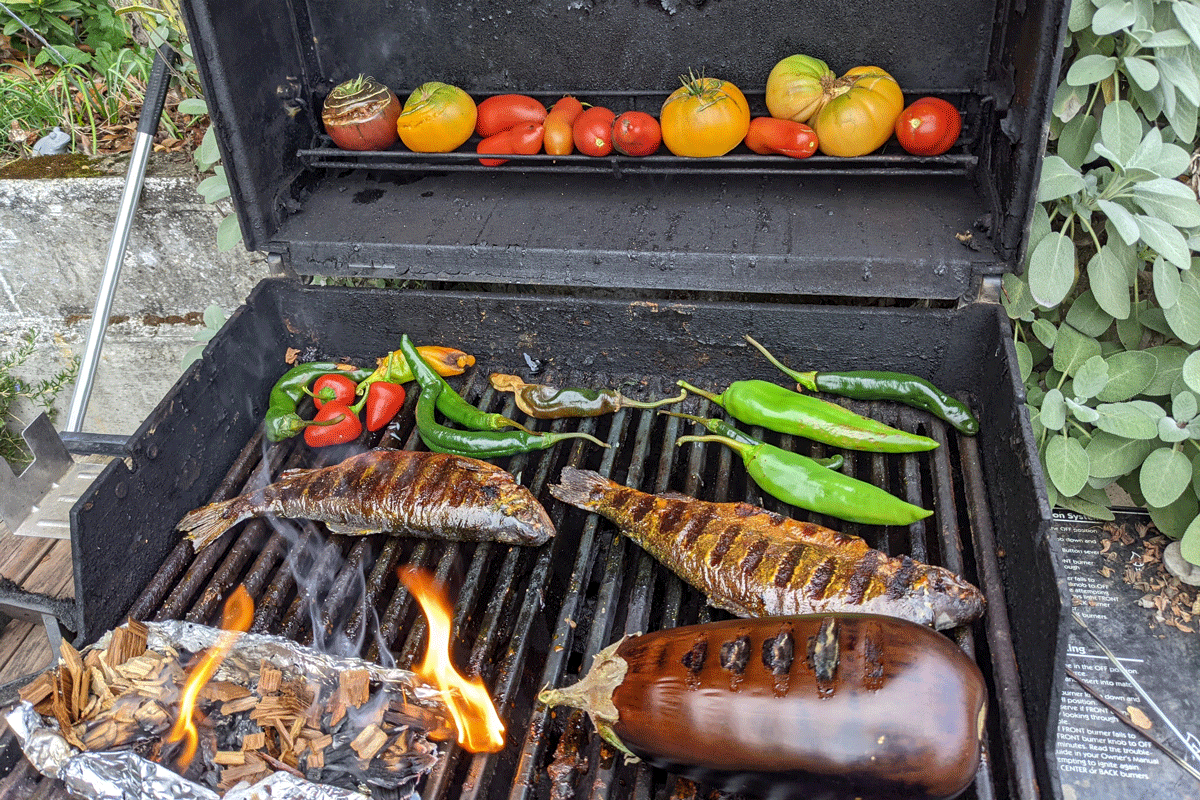 Line up your chips so they burn for longer, and start the fire at one end. Grab whatever else is around and smoke that, too. (Image: Amanda Blum’s Redhead Grill)

You don’t have to overthink the smoking — a fancy setup is not necessary here, and even your oven will do. If you do have a fancy smoking setup, you won’t need my help here, but if not, take a 30 cm-long piece of aluminium foil, fold it over a few times to make a 4-inch by 12-inch piece, then put a large handful of chips in a long line on the foil, near the opening of the grill. Put your tomatoes, peppers and a large onion on the back of the grill (away from the charcoal or lit gas element), then light the chips on fire and shut the grill. Don’t get too hung up on the tomato-to-pepper ratios; use what you have. (Refer to the above pic to see what I used if you need direction.) Be sure those chips are actually on fire and smoking red before you close the lid. I usually prop the lid open an inch or so with a rock to give it some oxygen. If you’re using your oven, keep it closed — smoke detectors do not appreciate smoked gazpacho.

When the chips have burned out, turn the grill off and toss everything into a bowl and chill it until morning. 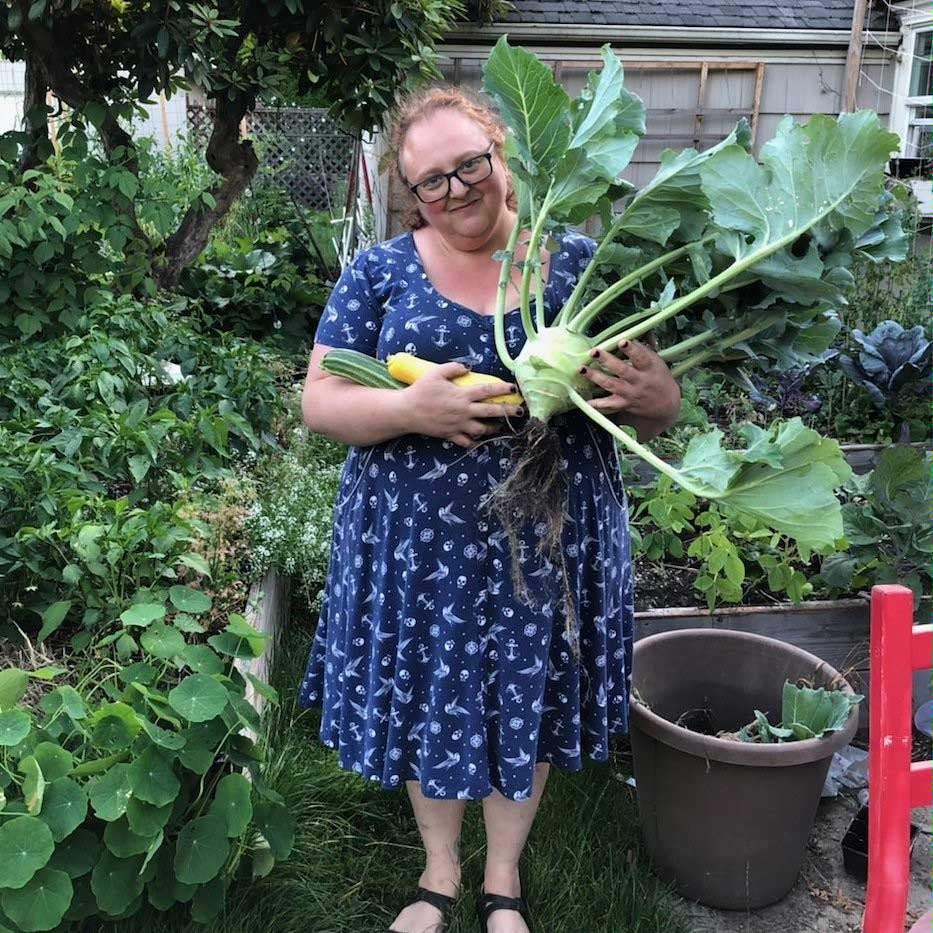 Image of the artist with her latest work. (Photo: Amanda Blum)

Cut your cucumbers in half (and for the record, mine are pickling cukes and they do FINE), and scoop out the seeds. Don’t bother peeling. Now, chop up the cukes, the onion, throw a shallot in, and add the tomatoes, skin-on. Just pull the stems off the peppers, toss those in, and pulse them in a vehicle of your choice. I like a Cuisinart here.

Best part? The trash theme continues. Grab the last of that stale bread, break it up and toss it in there. Then grab the dregs of that bottle of white wine that’s turned, rescue the brine from the pickle-less pickle jar from the back of the fridge, and toss it all into the Cuisinart and pulse again. Add a healthy amount of olive oil, salt and pepper (bonus points if you smoked the salt), and blitz it one more time.

That’s it. That’s the whole recipe.