How to Fix Audio Level Problems in Windows 10

Windows 10 includes a custom volume mixer, which sounds like a great idea on paper — who wouldn’t a way to control the volume of individual apps? It’s incredibly useful when you need to dial back your game audio a bit so you can hear your guildmates on Discord (or the YouTube video you’re listening to in the background). It’s not so useful when you forget it exists.

For the past week or two, some YouTube videos I’ve watched have sounded a little faint. I didn’t think much of it at first, assuming I simply bumped the dial on the external DAC I use with my headphones. I cranked that up a little bit, which solved the YouTube problem, but I then had to dial back Windows 10’s overall volume because my games and system sounds were coming in a bit too hot.

I didn’t really think about the relationship between my apps and volume. Instead, I kept moving my system’s volume up and down as needed when switching between apps. I figured some of the YouTube videos were just encoded at a lower volume. It happens. The difference between those videos’ volumes, my system volume, and the volumes of my other apps wasn’t jarring enough to make me think something was wrong.

After around two weeks of this, it finally clicked. Maybe there was something weird going on with my audio levels. And right before I was about to bury myself in Windows 10’s sound settings, I remembered that damn Windows 10 volume mixer.

You can see it in action yourself by right-clicking on the volume icon in the lower-right corner of your taskbar, and then left-clicking on “Open volume mixer.” In a perfect world, all of the sliders would be at the exact same level, like so:

If you’re seeing some sliders set much differently, or finding that some apps are muted even though you’re still hearing sounds in others (or hearing general Windows system sounds) you’ve found your problem.

To fix this, you’ll have to engage in a fun dance of moving all the sliders either to the top or the bottom of their ranges so they all match. Then, move your Device volume (the left-most slider) to a comfortable position, and it should move all of the other sliders at the same rate. Getting everything to equal out can be a little annoying, but that’s how you fix it. 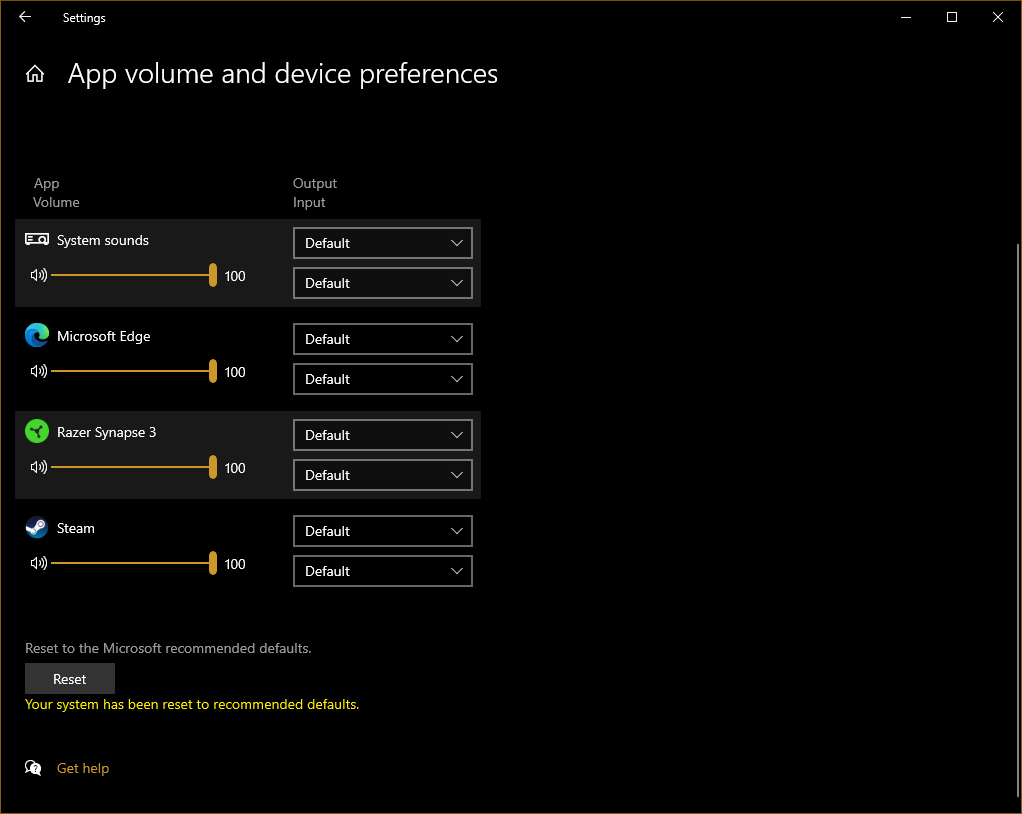 I haven’t tried it, but there’s another technique to consider: I believe you can also pull up Windows 10’s Sound mixer options via a Start Menu search. In the screen that appears, scroll down a bit, and then click on the “Reset” button in the lower-left corner. This should turn all of your apps up to 100% — that’s one-hundred per cent of the system volume, since it’s a relative measurement — without messing with your actual system volume and blowing out your eardrums in the process.