Use Your Sous-Vide Circulator to Can Pickles

Like many of us living in these dystopian, apocalyptic, puff-sleeved, cottagecore times, I have ramped up my pickling efforts this year — partly because who knows if plants will even still exist by next summer, and partly because well, I’m home a lot, and I have the time. Why not make pickling a suddenly crucial part of my sense of self and a tentpole for my delicate emotional stability?

While many folks are only just now getting on the pickle train and stripping Ace Hardware’s shelves of canning jars and supplies (seriously, there is a nationwide shortage), my own personal pickle train pulled out of the station in June and was chugging splendidly along all summer save for one problem: the heat involved. High-acid (vinegar-brined) pickles are generally canned in a boiling water bath. A boiling water bath is exactly what it sounds like: a gigantic pot of water, big enough to cover several quart or pint jars by at least an inch or two. It takes forever to bring the water to a boil, then you have to boil your empty jars to sanitize them before filling them, and then you drop the pickle-packed jars in that hot, hot water for the recipe’s canning time (usually in the 10-15 minute range). Ultimately, this means you have a giant pot of hot water at your elbow for an hour at a go, and the joy of having all that steam and heat lingering in your kitchen for longer still.

I grew up in South Florida, understanding air conditioning to be a basic human right. Today, I live in idyllic Rhode Island, The State People Confuse With Long Island (Which Isn’t Even a State) if I mention it anywhere outside the Amtrak corridor, in a house that is over 100 years old. The only air conditioning it has are the units I muscularly wrestle into the windows in a late-spring ritual of pain. My kitchen is very small and home to a refrigerator between 30 and 1,000 years old, a creaky dishwasher that has wheels under it, and, somehow, a brand-spanking-new gas range that — at any setting — threatens to singe the hair off your forearms from a three-foot distance. Having a stove powered by flames summoned directly from hell makes boiling a giant pot of water faster, but it also turns the entire house into a sauna — and not a relaxing sauna, but a sauna of extreme discomfort, full of decaying vegetables and reeking of vinegar.

Initially, the idea of standing over Hades the Range with a thermometer in a pot trying to keep the water at that 180º sweet spot did not appeal. But then, a thought occurred: Why couldn’t I just do this with an immersion cooker?

It goes without saying that I would be excited by an option for canning that does not require boiling an infant-sized pot of water for any length of time. So I was delighted — though sceptical — to discover that the USDA has safety-approved a method of canning that uses low-temperature pasteurization to seal high-acid foods safely into their jar homes. The process is straightforward: drop your prepared jars into warm water (120º to 140º F), heat the water to 180º to 185º F, and then keep it in this precise range for thirty minutes.

Initially, the idea of standing over Hades the Range with a thermometer in a pot trying to keep the water at that 180º sweet spot did not appeal. But then, a thought occurred: Why couldn’t I just do this with an immersion cooker? A temp of 180º F is 180º F, after all, and an immersion cooker has the benefit of allowing one to precisely control temperature without obsessive oversight.

First, a word on canning safety. As a person with anxiety about pretty much everything, it is not an overstatement to suggest that I live in mortal terror of botulism, a rare but potentially fatal illness caused by ingestion of Clostridium botulinum bacteria. Botulism spores are common in the environment. The spores themselves are not the problem, however — they only become dangerous when they can grow into bacteria. Here’s the fun bit: botulism is invisible in canned goods! You can’t smell it or taste it or feel it. You’d only know it was there if you got sick.

Clostridium botulinum loves a cosy, low oxygen environment, such as you might find inside a jar. What it doesn’t like is acid. So, keeping the experience of eating your homemade pickles death-free means ensuring the pH of your pickles stays below 4.6, safely in the range of “high acid” foods. This is why a popular rule of pickling is to keep the water-to-vinegar ratio in your brine at 1:1. Contrary to common assumption, a boiling water bath alone does not fully protect your pickles from botulism. This is because, while botulism bacteria can be killed by boiling water at 212º F (or really at 180º F and up), the spores are only destroyed at 240º F, which can only be achieved by pressure canning (this is why pressure canning is the only safe method of preserving low-acid foods). When using an immersion circulator, acid is key to preventing botulism.

For my first effort at sous-vide canning, I used a straightforward bread and butter pickle recipe I’ve made loads of times before. I should warn you that this is not what the USDA advises! Low-temperature pasteurization as a canning method was first included in USDA-approved practices in 1988, but they are very clear that this method should only be used with specific recipes as written in the USDA guide. The National Centre for Home Food Preservation publishes The USDA Complete Guide to Home Canning, which is chock full of information and tested recipes, and is available as a free pdf (hop directly to Guide 6 if you want to read about low temperature pasteurization and see the approved recipes for yourself). I, however, am a pickling renegade, and I figured if my acid was solid and I gave my cucumbers a good salting to draw out excess water, then sous vide should work just as well to make non-sanctioned cucumber pickles. 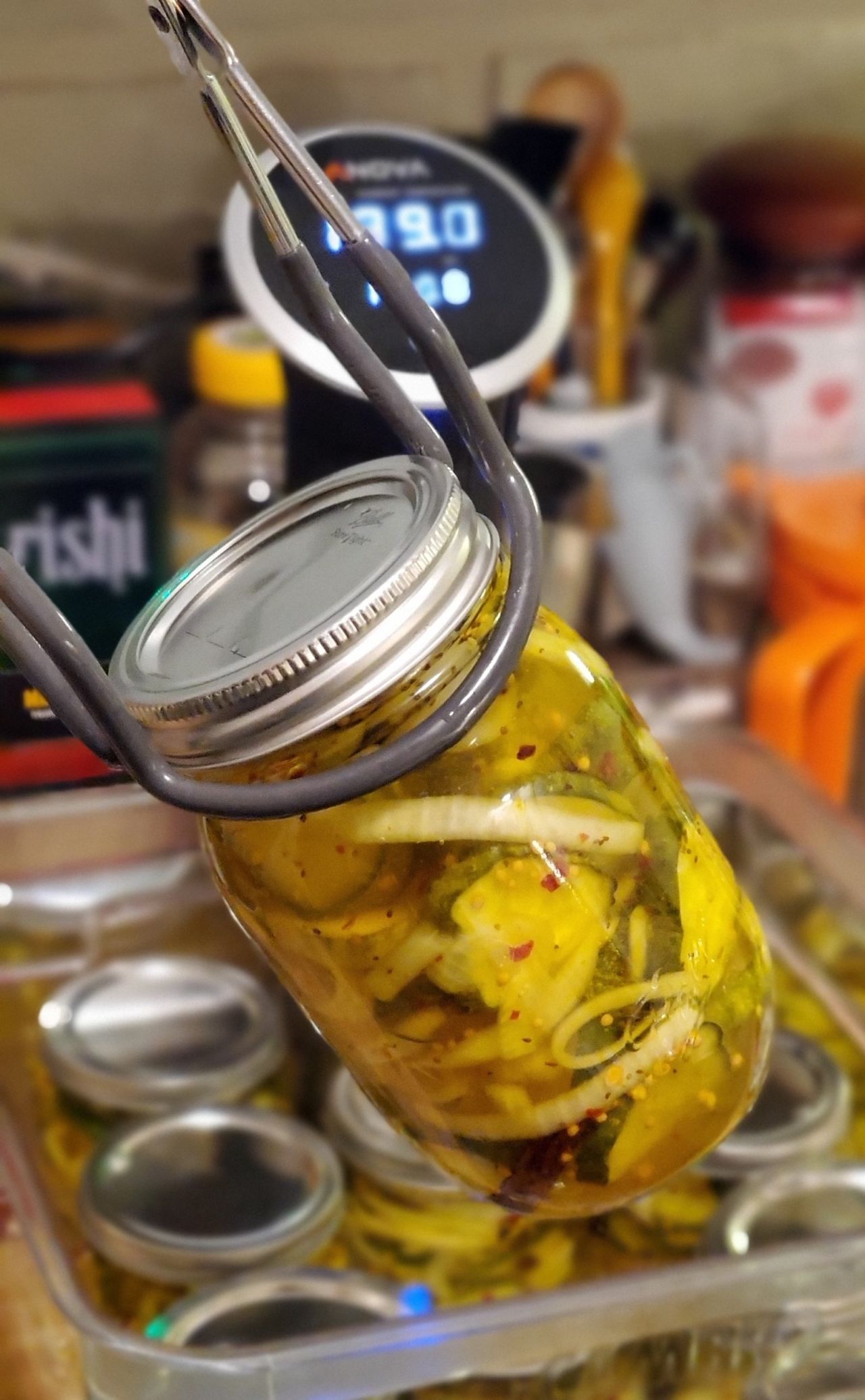 My first attempt was a success. Besides killing bacteria, the other purpose of the heat canning process is to seal your jars and make them shelf-stable by keeping any new bacteria, mould, or yeast from breaking in and ruining your pickles. My sous-vide lids sealed just as securely as the lids on the jars I’d given the boiling water treatment to the prior week, and thus far I’ve seen no signs of spoilage.(It’s been about five weeks since my first experiment.) Due to my obsessive nature, I check the first new jar of every batch of pickles using pH testing strips, just to be extra sure my acid is where it should be. (These strips are usually marketed for kombucha-making specifically, but they work for pickles too.)

The biggest benefit of sous-vide canning — and honestly, this is the real reason most people with air-conditioned homes take the low-temperature pasteurization route — is the improvement in texture. Cucumbers get soft in boiling-water canning; you can fight this by adding calcium chloride (aka Pickle Crisp) but I’m not a fan. For one thing, I feel like calcium chloride results in its own texture that is a little different from crunchy-au-naturel, and softer pickle slices don’t really bother me anyway. But sous-vide pickles keep far more of their cucumber crunch, which is a definite appeal for many. If you want truly crisp pickles, fridge pickles are the way to go, but sous-vide canning does offer a shelf-stable middle ground. When my non-authorised bread and butter pickles recipe seemed to succeed, I also made the USDA’s low-temperature pasteurization-approved dill pickle recipe without deviation to confirm my results. The pickles are sort of blah and under-seasoned by my standards, but the texture was great. 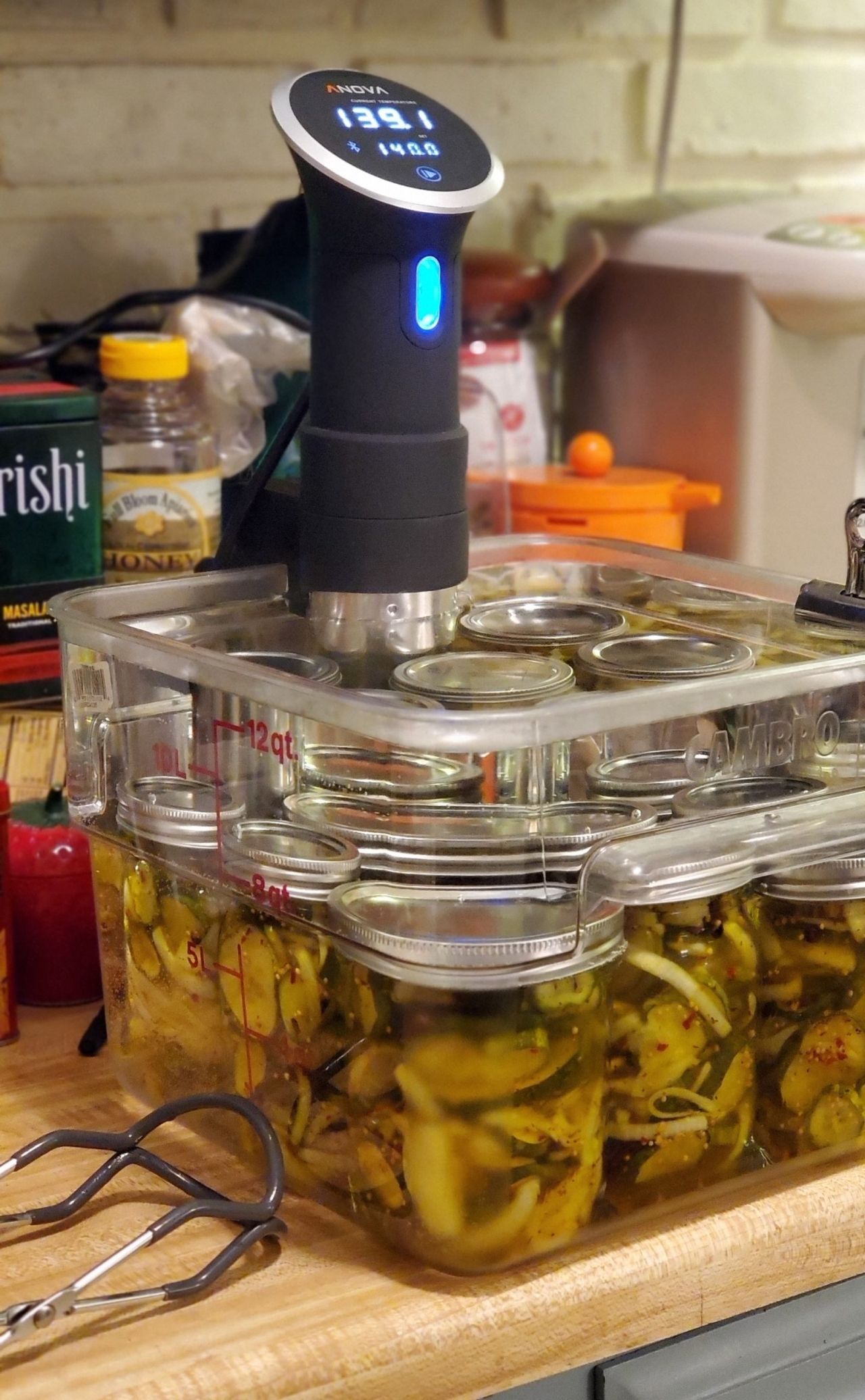 The real breakthrough came when I sous-vide canned my fermented cucumber pickles, which normally I keep in my very crowded fridge, where they have a limited lifespan. Post-sous vide, they did not stay quite as crisp as they do in the fridge, but displayed a world of improvement over the mushifying effects of boiling-water canning. Sous-vide canning does kill off the beneficial bacteria that make fermented pickles good for your guts, but this is a compromise I’m willing to make for shelf stable fermented pickles.

That said, I wouldn’t use the sous-vide approach for just any vegetable — there is a reason why seasoned (lol) picklers tend to stick with well-established and thoroughly tested recipes published in the USDA bulletin or by preservation stalwarts like the Ball Blue Book. Different vegetables have different water contents, different densities, and therefore different needs for canning. While it seems that sous-vide canning is safe enough for most high-acid cucumber pickles, it may not work as well for pickled carrots or green beans. It’s possible there just hasn’t been a lot of testing in this arena, or it may be that the testing resulted in failure — the USDA bulletins don’t say, being somewhat reticent with the details at times. (You can and should call your local cooperative extension for questions about food preservation and safety! They’re supernerds who will delight in giving you all the information you could possibly need.)

Will I continue to sous vide certain pickles? Absolutely yes. The hands-off process is super easy, and I have eaten a great volume of them and I haven’t died, which is my own personal gold standard for food preservation success. Plus, I am minimising the need to fill my kitchen with tropical rainforest levels of muggy heat, so my puff sleeves stay perky for the apocalypse. In these dark times, I’ll take my wins where I can find them.