Why Use a Regular Bowl When You Could Use a Cheese Bowl?

I love a food delivery system that is itself edible. Usually said delivery systems are employed in sweet and often ice cream-related scenarios (cones, waffle bowls), though one could argue that, when used correctly, the Bugle qualifies. But in my opinion, the best savoury edible container is one that is made entirely of cheese.

This is not a completely new concept around these parts. I have made cheese cups before — moulding them around a shot glass — but I think now more than ever, it is time to scale things up. The good news is that making a cheese bowl is no harder than making a cheese cup. You just swap the shot glass out for a bowl.

As with the cheese cups, start by making frico, which is just a pile of fried or baked cheese, cooked until it turns crispy and lacy. I usually make my frico in a nonstick frying pan, though you can bake it on a silicone baking mat if you like. The amount of cheese you’ll use depends on how big you want your bowl to be. About a third of a cup usually works well for an average-size receptacle, but you ultimately want to produce a disk of cheese that extends a few inches beyond the base of the bowl you’re using to shape it. Start with a single layer of shredded cheese without any big gaps — you should be able to see specks of pan through the cheese before it is baked, but just specks.

Though I avoid them when making a grilled cheese sandwich, hard cheeses that grease out when you heat them are good for bowl-making purposes. Cheddar and parm are my two favourites. The oil separates out, creating a lacy network of crisp shreds. Start by putting the cheese in a cold pan, then turn the burner on medium high. When the edges are dark but the centre still looks a touch “melted” (but not yet fried), remove the large piece of frico from the pan and quickly drape it over a deep cereal bowl, gently pressing the sides down to help it take the proper shape. Place the bowl on a paper towel to catch any grease drips. 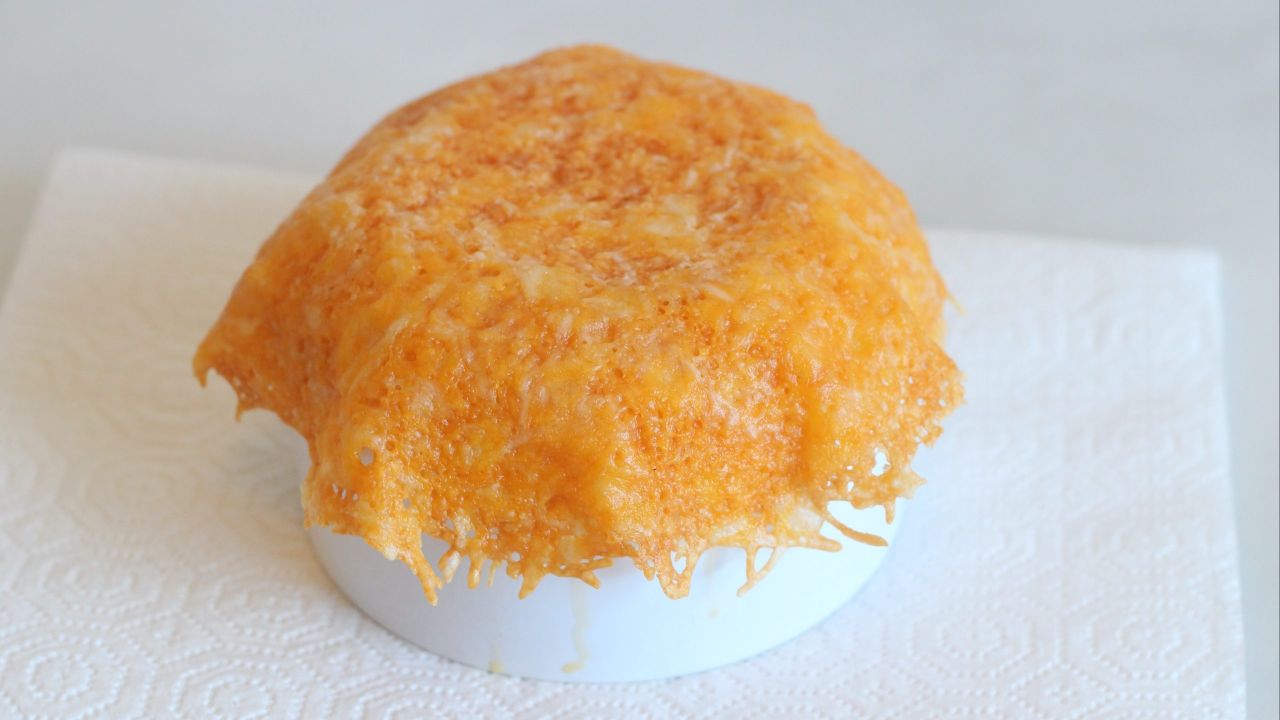 Once the cheese bowl has set — this takes about five minutes — carefully lift it from the form and fill it with chips, or Goldfish, or pasta, or rice, or onion dip, or tuna salad or Caesar salad. Most savoury foods are good in a cheese bowl, though hot soup would be disastrous (sadly). Ice cream would be weird in a cheddar bowl, though I think a case could be made for using one made of parmesan.

Once you have eaten what is inside the bowl, eat the bowl itself for a very “Gene Wilder about three and a half minutes into ‘Pure Imagination’” moment. If there is a more iconic edible container moment in cinema. I do not know it.