How to Choose and Install the Right External Hard Drive for...

How to Prevent Your Honey (and Other Condiments) From Leaving a... 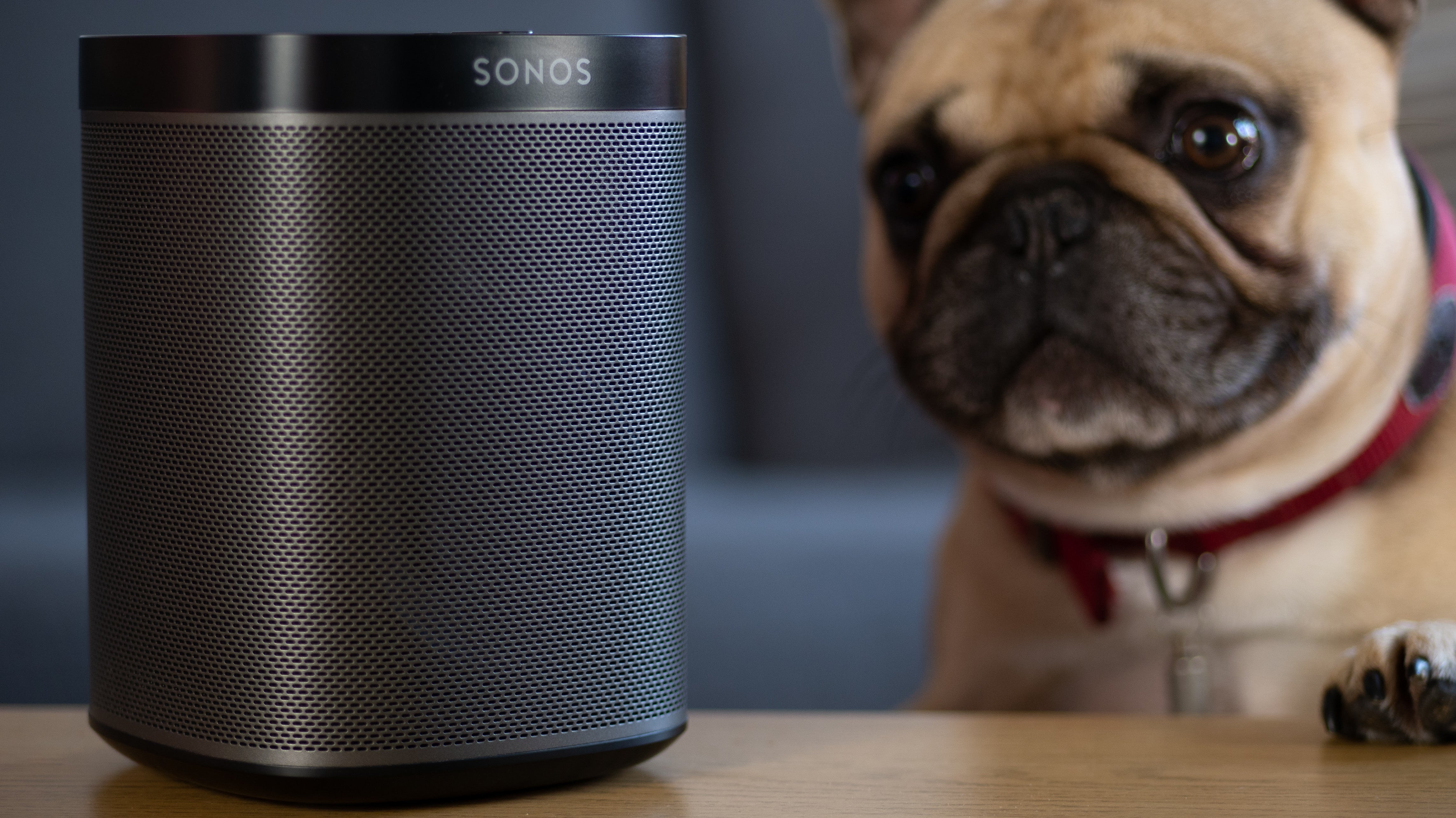 It’s a common issue: You, or someone you know, has splurged on an amazingly fast internet connection—but they still can’t get their wired and wireless devices to play nicely within their home or apartment. This invariably leads to the question, “Why am I paying so much for these insane internet speeds I’m not seeing?”

I recently moved—right when the coronavirus craziness started settling in, which is a story in itself—and the people I now rent from were paying out the arse for gigabit Comcast. Yet they were using so many wireless extenders in their house to stretch a signal from one corner to the other, they couldn’t even access the web in any meaningful way around their home. Imagine that: having access to speeds that most people in Silicon Valley will never see, but being unable to even load Instagram in the living room. Oof.

Lifehacker reader Michael has a similar problem: great internet speeds and a terrible connection at home. He describes his predicament:

Q: I have great internet speeds and crappy connections. What gives?

I have a Sonos system with eleven devices. My home internet speed is 1000 MBs fibre (in Chattanooga). I bought a new computer to facilitate that but I still have problems purportedly because although the Wi-Fi card in my new computer was advertised as 100 mbs download it’s only doing about 56. Seems they can advertise bs and get away with it. My model is hp laptop 15-dy1xxx. I can hook up with USB adaptor to Ethernet and get enough horsepower for the Sonos. Do you have a recommendation for a plug in device to override the “100” mbs Wi-Fi card in my computer. Sonos says I should have at least 5 mbs per device to correctly function. Ps- not tech savvy. Thanks!

A: Here are some non-tech-savvy ideas for boosting your network connection

First off, thanks for sharing that you’re not tech-savvy, Michael. I think that’s important! I won’t try to overwhelm you with solutions that an average person wouldn’t be able to implement. While I’d like to think that everyone knows how to string ethernet cable around their house and set up access points, the reality is that for many people, the thought of doing this elicits the same, primordial fear as the suggestion that one could change the oil of one’s in the driveway. No, no, no.

Let’s separate a few technological items you brought up to make this process easier to solve. First, your super-fast home internet speed is awesome. Any time prior to a month ago, I would have been insanely jealous that you were getting better internet in Chattanooga than I was in the heart of technology, California’s ever-frustrating Silicon Valley. We are now equals, however, and I’m as thrilled for you and your setup as I am for mine.

While I highly doubt your home internet is having an issue that prevents your Sonos speakers from streaming music, there’s an easy way to check. Take an ethernet cable and use it to connect your computer or laptop directly to one of the non-internet/non-WAN ports on the back of your wireless router. That internet/WAN port should already be plugged into your cable modem. 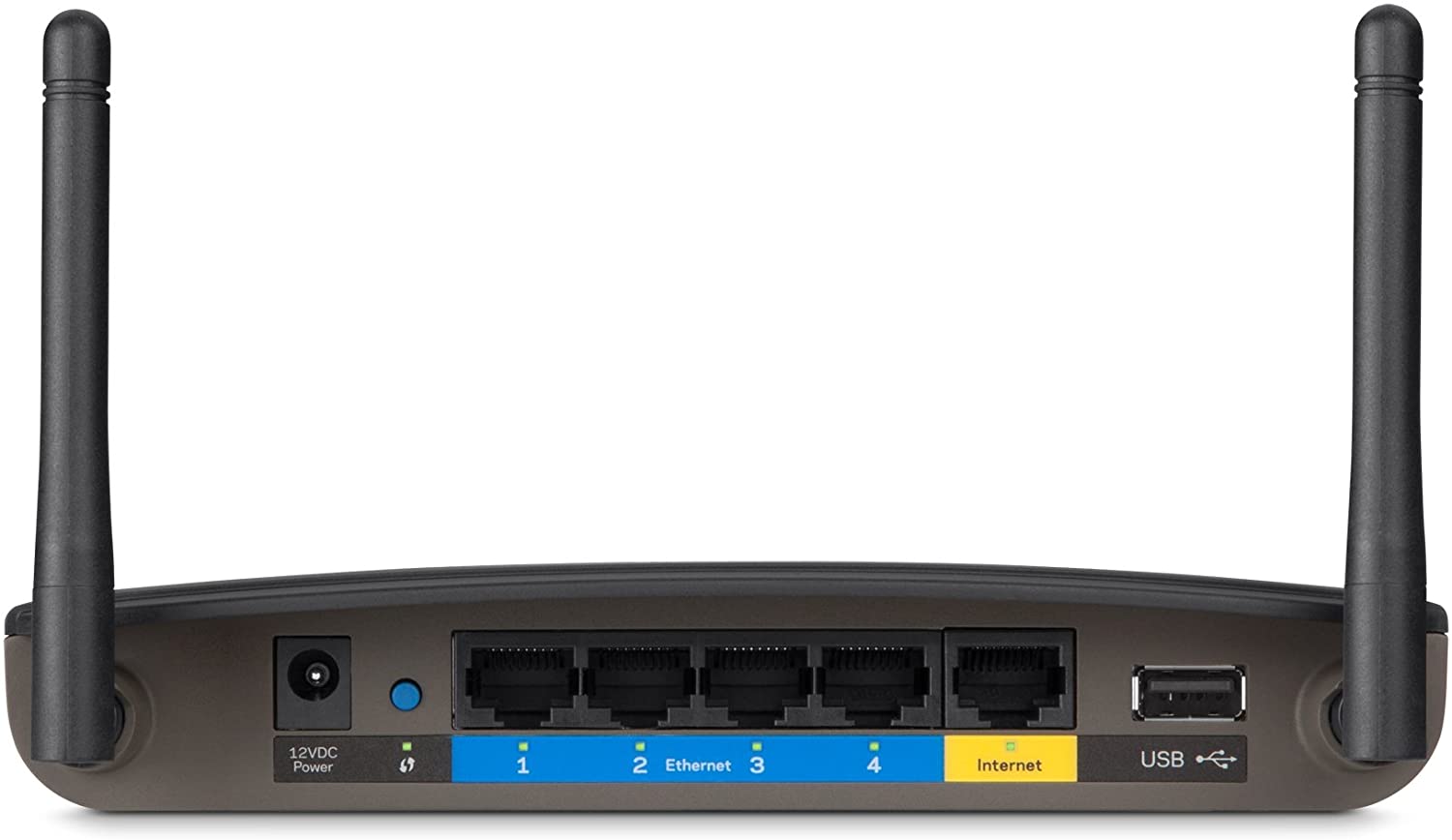 Amazon)” loading=”lazy” > Connected your desktop or laptop to the blue ports; the yellow port, in this image, should already be connected to your cable modem. (Image: Amazon)

If you’re using an all-in-one cable modem and Wi-Fi router—as in, a device you got from your internet provider that already has a coaxial cable connected to it—any ethernet port on its rear should suffice.

Once you’ve connected up a laptop or desktop, visit a site like fast.com. You probably won’t see gigabit speeds (1,000+ Mbps), but you’ll at least see a number that’s big and great. Here’s what mine looks like on a similar 1,000 Mbps plan: 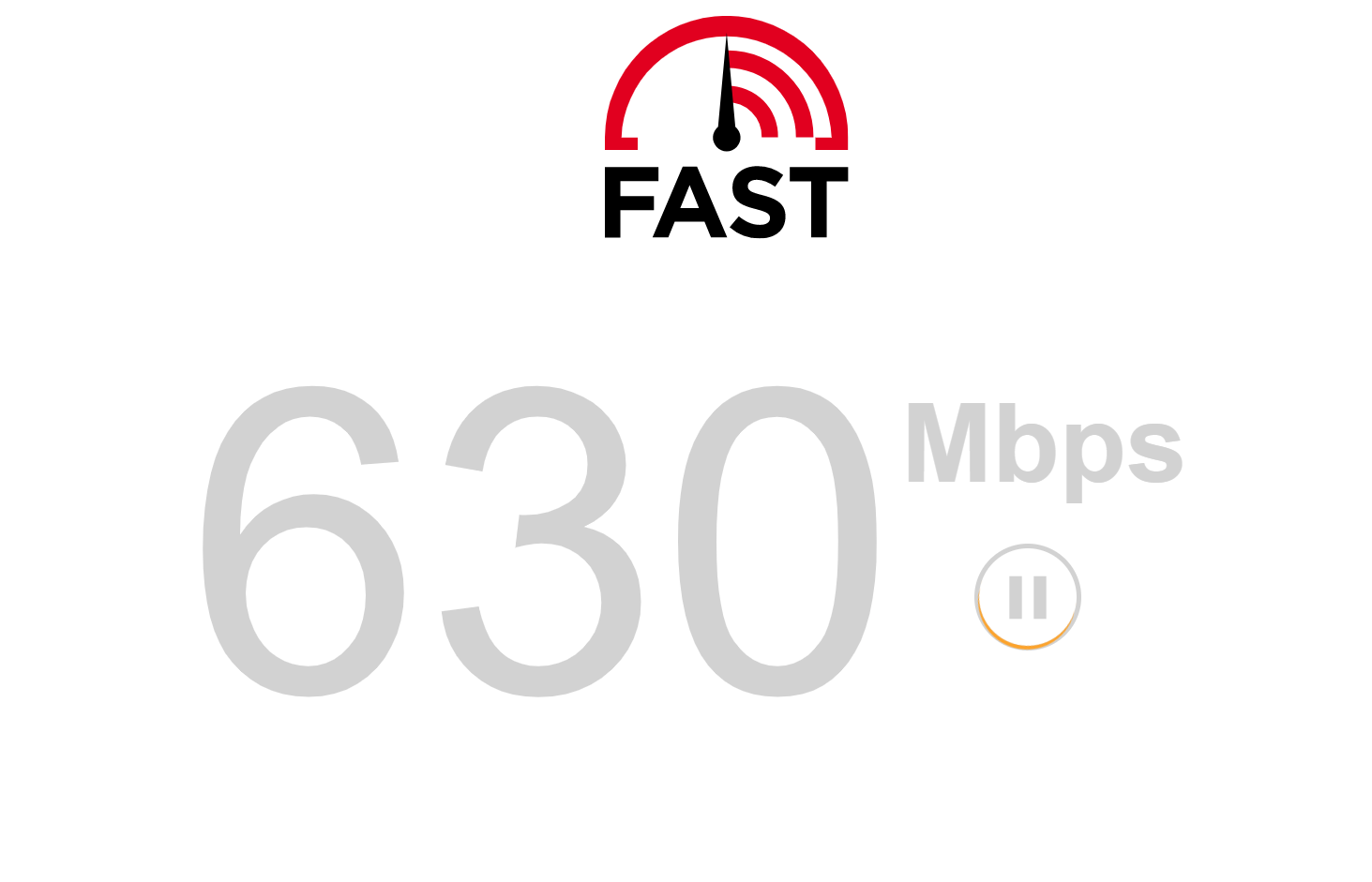 Again, I highly doubt your internet connection is causing any of these issues, but if you’re seeing something astonishingly slow for what you’re paying for, like 50-100Mbps, you might want to have a chat with your ISP.

When you’re using any device with wireless connectivity, such as a laptop, a router, or a Wi-Fi adaptor, you’re typically shown the maximum speeds the device supports on its tech specs (or written in giant font on the box itself). You’ll never reach these speeds in real-world use, even if you’re sitting right next to your wireless router with whatever new device or dongle it is that you’ve purchased.

It’s not so much a bait-and-switch as it is a misunderstanding of the number. The problem is the inherent variability that comes with wireless networking. There’s no way a company could find one number that accurately reflects the experience you’re likely to have with its wireless device, because there’s no way of knowing what your speeds might be. Your home setup might have ideal conditions; someone else’s apartment might have lots of interference. Would it be fair to the second user to see an “actual” performance number that reflects the experience of the first user? I suspect they’d feel just as annoyed, or worried they were ripped off, if they aren’t achieving the same speeds as someone else—even if it wasn’t the fault of the wireless device in question.

So, to level the playing field, that number on the box typically represents the maximum theoretical speed the device can support—at least, when it’s written out as “N600,” or “AC1200,” or whatever. If the box copy instead specifies this in Mbps, or megabits per second, it’s the same deal. As in, it’s not a guarantee; it’s just expressing how fast your device could go. You will never actually see a speed that fast over a wireless connection.

That all said, if your laptop is only capable of a 100Mbps connection at best, but you’re paying for 1000Mbps internet, that’s a problem. You’re not getting anywhere near the speeds you could be, and you could probably save a lot of money by bumping down to, say, a 300Mbps tier of service from your ISP (or less than that, even, if they offer one). Even 150Mbps would give you plenty of overhead for streaming music on to your Sonos setup; the highest-quality Tidal stream eats up a mere 5Mbps—child’s play for most reasonable internet plans.

But what about the Sonos streaming?

Without knowing the full details of your home network, I suspect the issue with your setup is your wireless network. Your Sonos speakers seem to be set up correctly, and if you can stream audio from your Ethernet-connected computer to them, I don’t think the speakers are to blame. For whatever reason, your computer is struggling with its wireless connection—even at 50+ Mbps, which is strange, but not unheard of.

That all said, I’m surprised you’re streaming audio from your computer to said speakers—at least, that’s my understanding. I would expect most people to use the Sonos apps as remote controls, allowing them to play music on their Sonos speakers from connected services like Spotify, Apple Music, or Amazon Music. The speakers, in this case, stream the music directly from the service using their own wireless connections; your computer doesn’t have to stream the music to them.

Otherwise, here’s how I’d troubleshoot this issue. I’d start by checking to see if you have better luck using your laptop with your Sonos speakers when your laptop has a line-of-sight connection to your wireless router (or router/cable modem hybrid). Literally, line of sight; I had a crazy connection issue the other day where the absurd amount of insulation in the walls separating a nearby access point and laptop rendered the laptop’s connection almost unusable. Going line-of-sight (rather than through-some-walls) fixed the problem immediately.

I’d then consider moving your wireless router (or router/cable modem) to as close of a central position in your house as you can get. Ideally, you’ll want it to be as near your primary Sonos speakers as possible. Centering your main source of a Wi-Fi signal within your house can help ensure strong coverage for everything—better, at least, than if your “Wi-Fi bubble,” for lack of a better way to phrase it, was originating from a far side of your house and stretching to reach all the way to the other side. 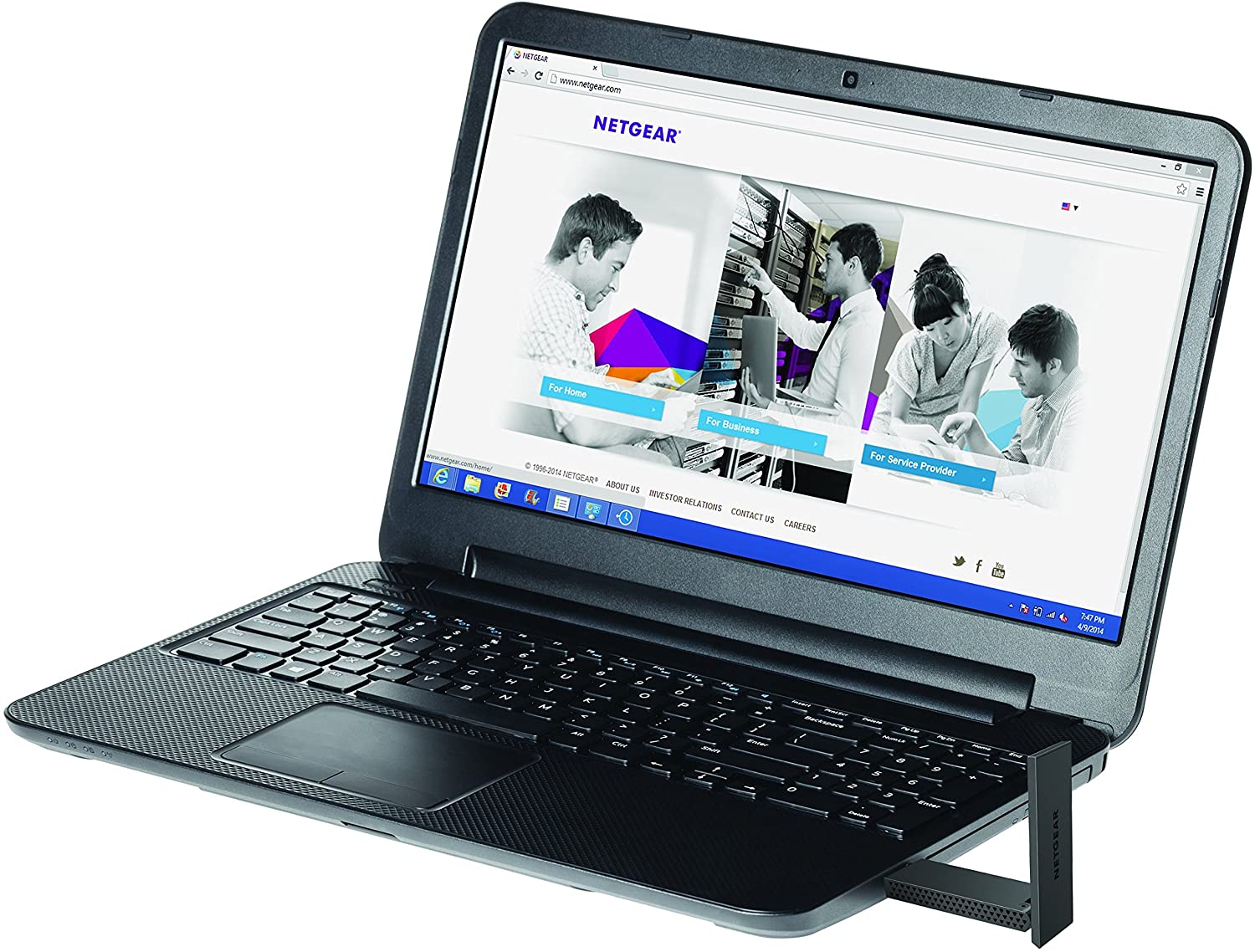 As for your laptop, you could get a high-powered USB Wi-Fi adaptor—one that’s at least as fast as whatever Wi-Fi speeds your router or router/cable modem support. Don’t cheap out on this bit if you want a more solid connection. If you’re using a router/cable modem hybrid, I’m assuming it’s fairly new and is probably giving you a wireless-ac signal—AC1200, at best. Look for an AC1200 Wi-Fi dongle for your laptop, and that should help quite a bit with your laptop’s connection.

I’m hesitating recommending my typical “upgrade your wireless setup” advice, because even if you had a lovely and easy-to-install mesh setup at home (a not-so-inexpensive upgrade), it still wouldn’t help your slow-as-molasses laptop connect much faster with its current Wi-Fi capabilities. A laptop that can only handle 100Mbps, at most, feels very ancient—and is likely limited to connecting on a band that’s prone to interference, anyway. That’s probably the reason it’s struggling to connect to your Sonos, and a reasonably priced Wi-Fi dongle should fix that right up. This one costs about $US40 ($61), and it should be all you need.

Do you have a tech question keeping you up at night? Tired of troubleshooting your Windows or Mac? Looking for advice on apps, browser extensions, or utilities to accomplish a particular task? Let us know! Email [email protected].