Use An Air Fryer For Optimal Snacking 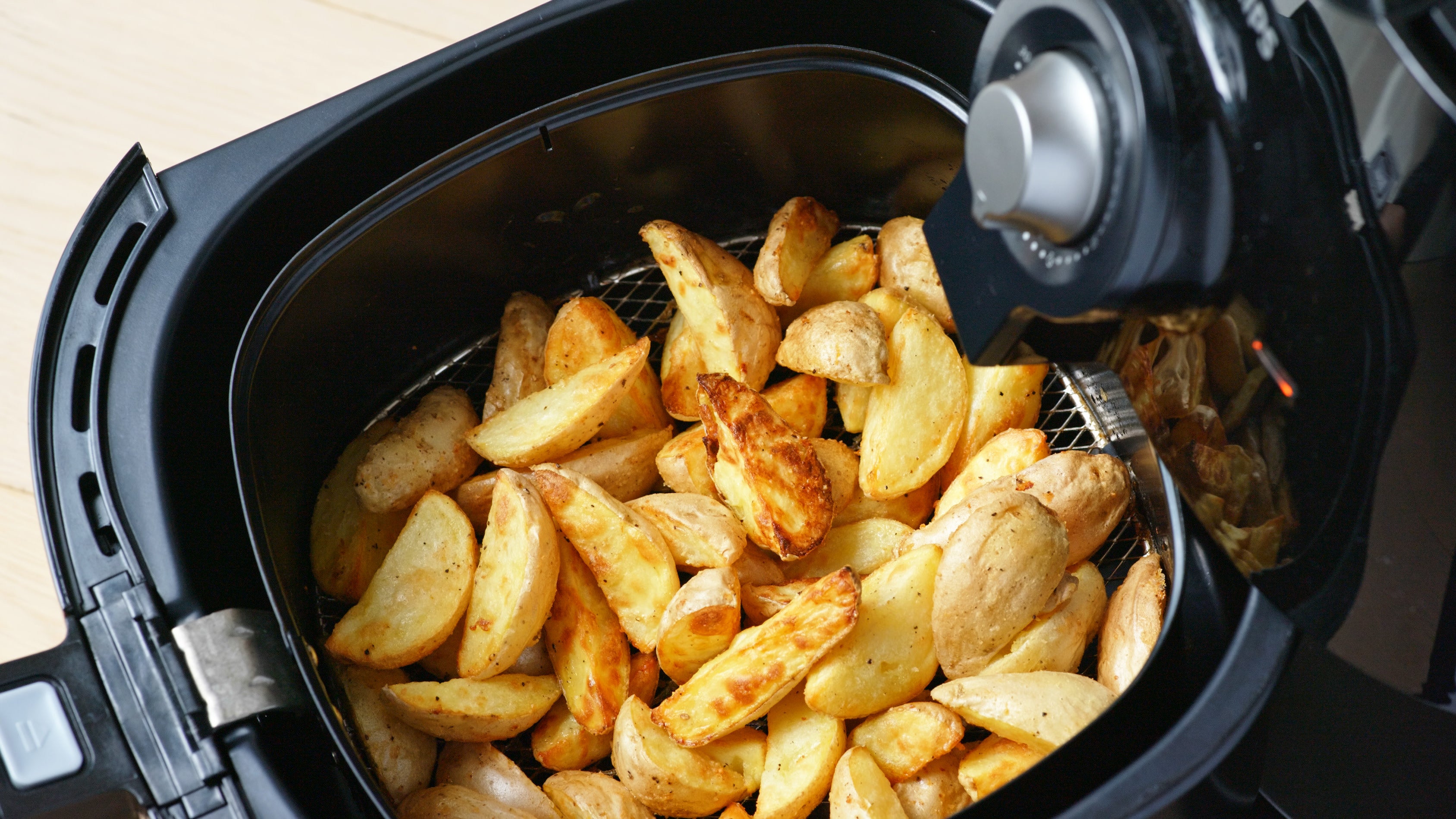 If you’ve given up valuable counter space for an air fryer, getting the most out your loud, boxy appliance becomes a priority the moment you unpack it. Luckily, it has many uses, from restoring leftovers to their former glory, to making delicious, yet nutritious, veggie-heavy snacks.

If you’re not familiar with exactly how an air fryer works, think of it as a mini convection oven, not a deep fryer. With a combo of air and heat, food crisps up fast. You get more browning, faster and, if you’re using oil, it goes way further than it would in a frying pan, saving you money and making foods less fatty.

This tech is pretty fabulous for people who are just trying to eat faster, and all the extra-flavourful browning doesn’t hurt. It’s great for snacks and leftovers, and it even works on frozen foods. My air fryer may resemble the garbage can droid from Star Wars, but after using it for these hacks, the homely appliance has earned a space on my counter.

Using the air fryer to execute some of the tips and tricks from Eating Trash with Claire results in some next-level cookery. I’m always game for some trash eating, but after cranking out delicacy after delicacy with this thing, I have reached a new level of gourmet garbage.

Cruciferous veggies shine in this thing, keeping the produce fresh and juicy inside while caramelising the outside. The first major success: sweet and tangy broccoli fries from the meaty stems I’d normally toss in the trash.

I barely shaved off the tough skin, cutting the tree stalks first in half longways, again horizontally, and then into sticks. After tossing with soy sauce, roughly one teaspoon-sized cube of frozen minced garlic, and a splash of sesame oil, I set the device to 200 degrees Celsius and cooked the stems for eight minutes, giving the basket a firm shake after four. The result was a sweet and salty, slightly bitter, spicy snack that lit up all my taste buds, and it came together in less time than it takes fully heat an oven.

All of those stems you weren’t using, not just broccoli, will come out tasting like they came from a restaurant, not the dregs of your produce drawer. Kale and cauliflower stems do well here, and you can vary the seasonings to match your mood or meal. I go with garlic, salt and olive oil as a standard, but adding turmeric and cumin with a pinch of red chilli flakes to cauliflower stems turns them into pita-ready perfection.

Another Lifehacker classic that makes air fryer veggies—fresh or frozen—downright crave-able is A.A. Newton’s cornstarch coating tip—just toss about a pound of vegetables with a tablespoon of starch and some salt and spices before adding to the fryer. The starch soaks up the oil and seasonings while the well-ventilated air fryer crisps it up into a light, crunchy coating. This tip works great on frozen veggies too; the coating soaks up some of that excess moisture from the defrost perfectly.

You can also use the air fryer to “roast” vegetables, and eat them as a side, or stir them into a Roasted Veggie Dip. Working in two eight-minute waves at 200 degree Celsius, the deeply browned vegetables are ready to go in half the time it takes my oven to do any sort of charring. I have made the dip with broccoli, zucchini, mushrooms (which taste quite meaty), and cauliflower, always adding the sad scallions and stray shallots I have lying about, plus an entire head of garlic.

Stuck with leftover beans in the fridge? Just toss them in enough oil to coat, sprinkle with seasonings, and pop them into the air fryer at 200 degrees Celsius for 12 minutes. The beans come out much drier than the crunchy beans I’m used to making in my cast iron which, though delicious while hot, get cold and soggy if left out— not ideal for parties.

I recently lost my toaster to a move. (It was one of the cool ones with an egg cooker on the side, which sounds lazy, but made an absolutely perfect soft boiled egg.) Before my air fryer, I had been toasting and reheating all items in the oven, which takes forever.

I popped some frozen bread into the air fryer on a whim, and removed a near-uniform browned piece of toast. I then tried it with a buttered piece of fresh bread, and that came out tasting like fried bread, which I was obsessed with as a child. No matter how you slice the bread, frozen or fresh, this thing kills it, in a good way.

You can also use the air fryer to breath new life into leftovers. A slice of pizza was divine after just four minutes, miles quicker than any other method of reheating. Restaurant fries, which are normally sub-par on the second go, come out crispy and just a smidge oily.

This speedy reheating also works on frozen stuff like mozzarella sticks, onion rings, and potato skins. They cook up in 8-12 minutes, not four, but it’s still way faster than any oven. Everything I’ve put in my air fryer has come out crunchy in mere minutes, streamlining the busy evenings when I work from home.

Between this and the Instant Pot my aunt gifted me this year, my kitchen is upgraded by tech in a way I’d never known before, and I feel like I’ve joined an As Seen On TV rotisserie oven cult. I lust after green vegetables like potato chips as it is, but I’m still somehow eating more veggies than ever out of this thing. If you have the space or even the smallest whim, an air fryer is worth the space if takes up. I wasn’t sure I would give much of a damn about this lil’ guy, but the food has spoken for itself.