Nothing says sexy like I use a package manager to install apps instead of double-clicking boring executables. It just rolls off the tongue. But there is something fun about installing and updating your apps using a command line tool—PowerShell, technically. Once you’ve gotten the hang of it, the experience is even better than dealing with the regular Windows Store app (or so I’m told).

Good news: Windows 10 has a brand-new package manager—or, at least, it will. Microsoft is testing out the Windows Package Manager right now, and you can already use it to install a pretty good selection of apps. However, getting access to the package manager requires you to jump through a few hoops.

How to sign up to test the Windows Package Manager

As Microsoft describes, you have a few options for testing out the Windows Package Manager. If you’re enrolled in the Windows Insider program (because you like living on the edge) you’ll already have access. Otherwise, you can sign up for the specific Windows Package Manager Insider Program or install it yourself from GitHub—though you won’t get automatic updates if you take the latter route.

I went with option number two, and I got an email noting my acceptance to the preview program almost immediately after applying: 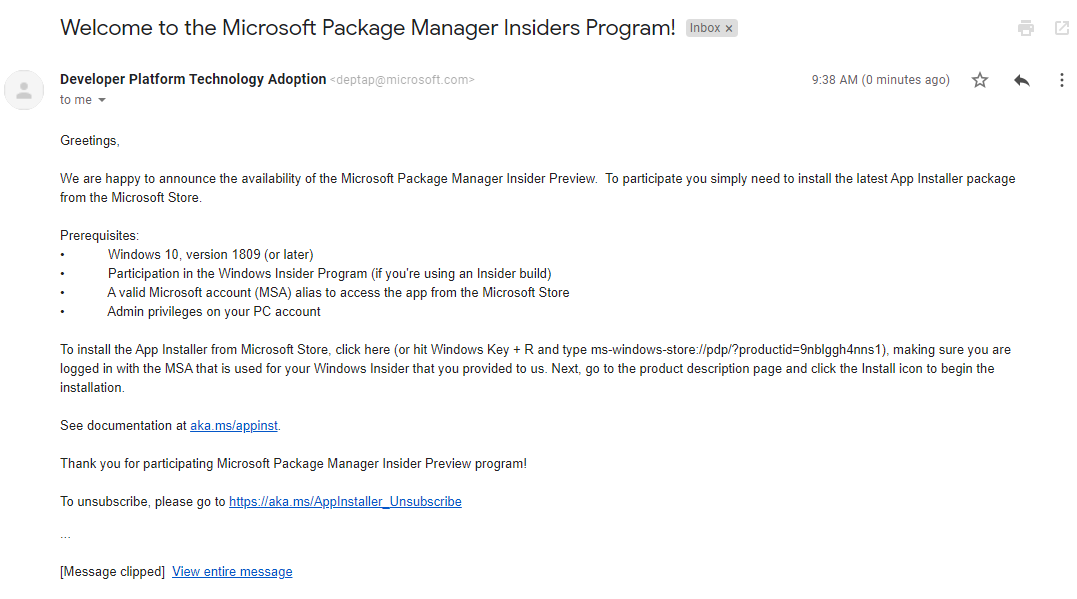 Whatever route you take, you’ll need to pull up the Windows Store and download the App Installer. Microsoft has a link for that in its blog post, but it didn’t work for me. Luckily, there’s also a second trick you can use: Mash Windows Key + R and copy and paste this in:

That got the App Installer to load for me, and I promptly reinstalled it (just in case): 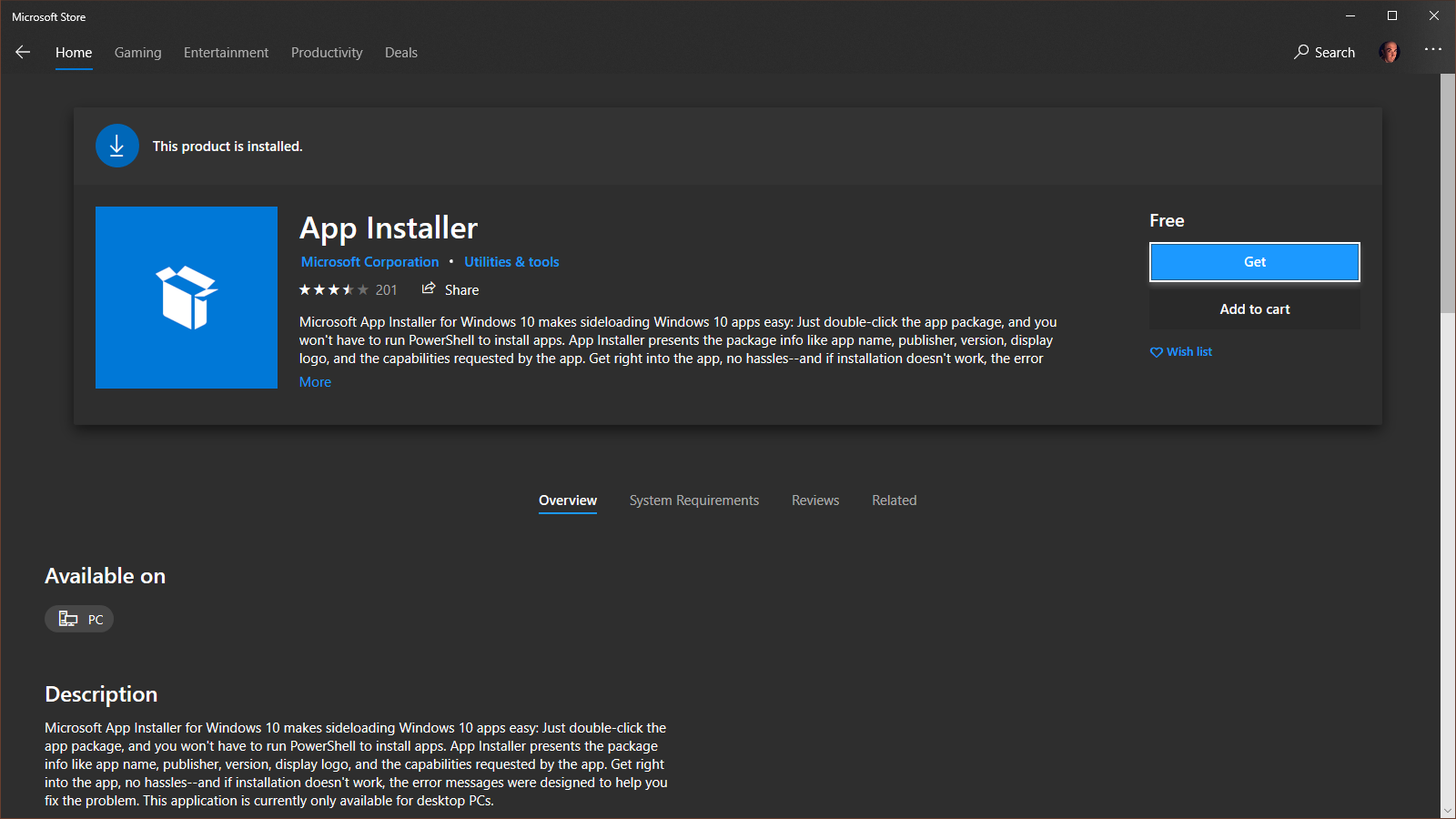 At this point, I tried to pull up a Command Prompt and execute the “winget” command to test the package manager, but something odd happened. 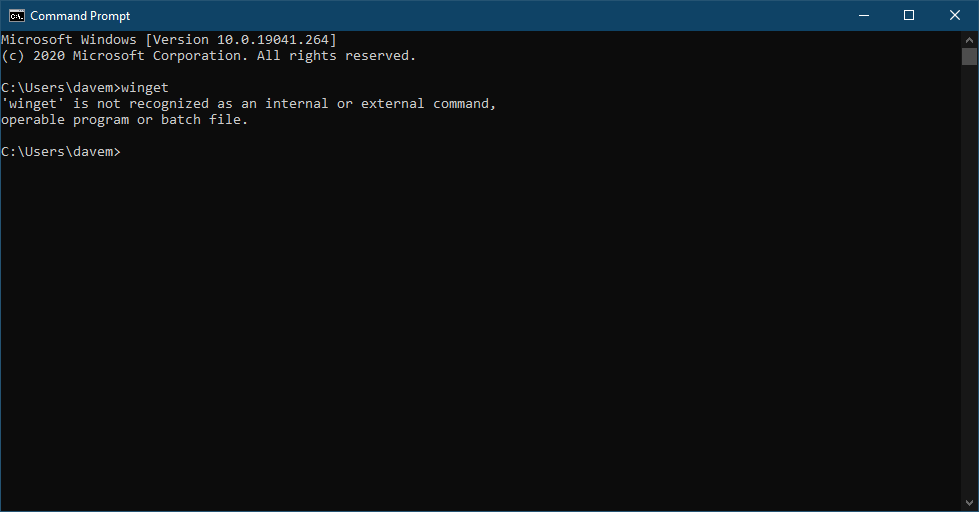 Hmm. I’m not the only one having this issue, as it appears there’s something bugged in the installation process. No amount of fixes suggested in the GitHub thread could get winget working for me, and I eventually resorted to just installing the GitHub version of the package manager so I could at least play around with it. When I did that, it worked perfectly: 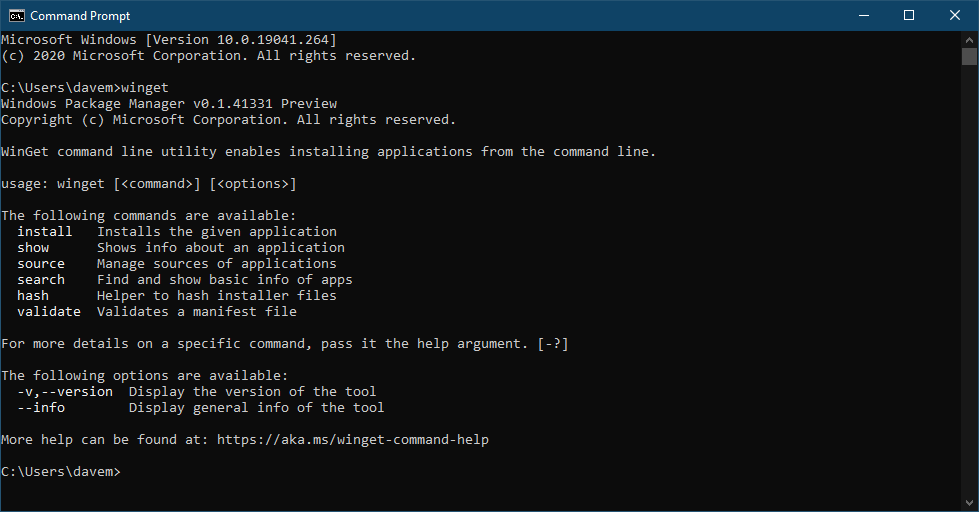 Let’s have some fun. To start, you probably want to know all the things you can install via the Windows Package Manager. That’s easy. Just type wget search into the command prompt and let ‘er rip. Here’s a small sample of what you’ll see: 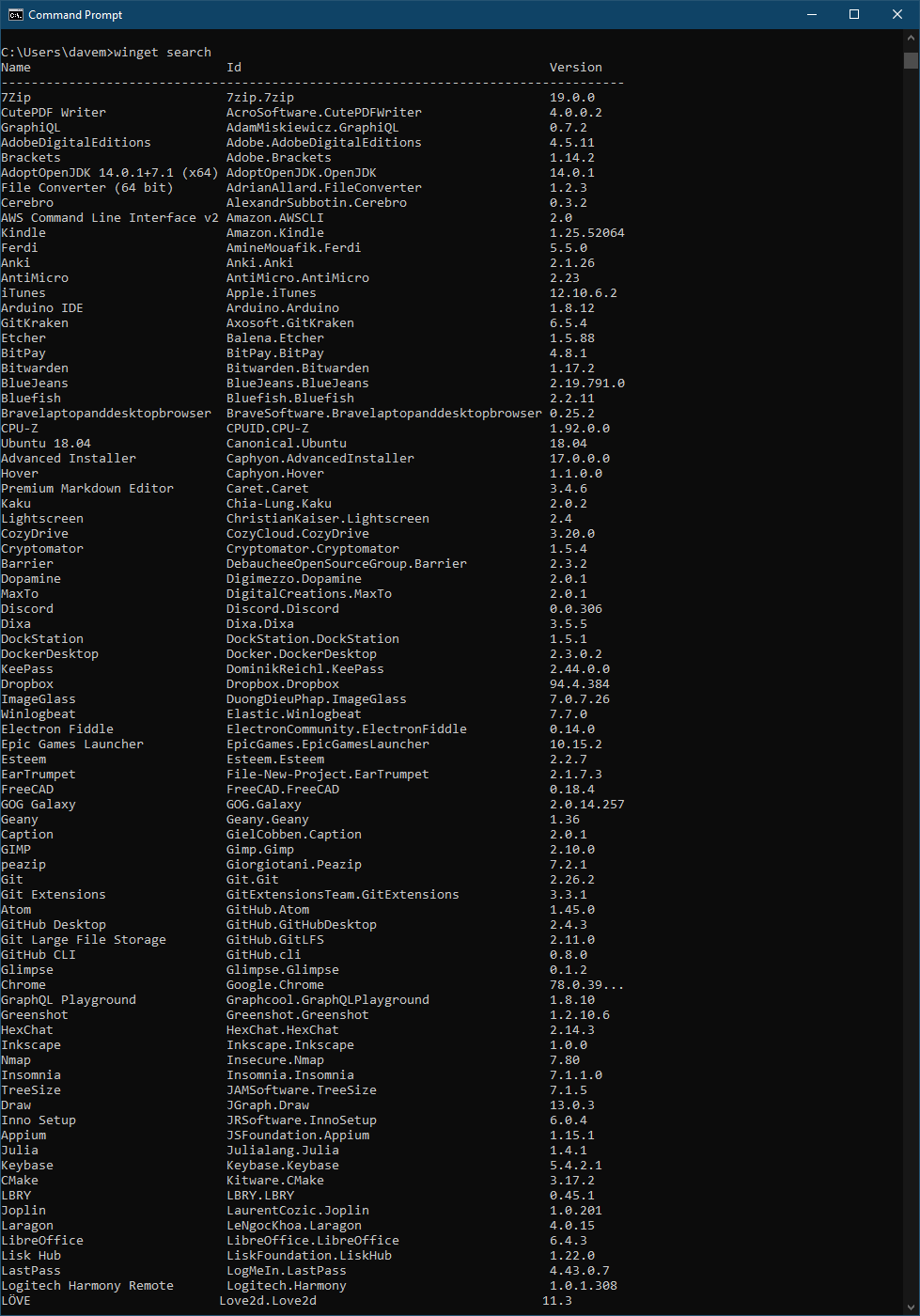 To install an app, simply type winget install [app name]. If you want more information about the app, type in winget show [app name] before you do anything else. You can also create a simple script to install multiple applications at once, such as:

Copy and paste that into a text file, add as many other apps as you want (by copying and pasting lines 3 and 4 and then changing the app names) and save it as a .BAT file. Whenever you need to reinstall your favourite apps on your PC, run the .BAT—just as you would if you used Ninite or some other app to manage a mass-install.

What if my app didn’t install correctly? And how do I update apps?

Since this is a preview release of the Windows Package Manager, there are bound to be a few quirks. When I tried to install Gimp, for example, it kept prompting me to choose from one of two versions. Obviously, I would want the newest one, but that’s yet one more variable I’d have to fuss with when building a script—and something you’ll only likely notice if you’re trying to install an app and it doesn’t go perfectly.

Speaking of, I apparently installed WhatsApp, but it doesn’t appear to actually be on my PC. I’m not sure where it went, or if it even installed, but there you go.

And as this is a preview build, the package manager is missing critical features that you’d probably want from a more robust program. That includes the ability to uninstall an app (which you’ll have to do via the Windows Control Panel for now) as well as the even-more-critical ability to update apps that you’ve already installed. Don’t worry, that functionality is coming—it’s just not here yet. If that dissatisfies you, well, there’s always Scoop.