The Prime Minister has outlined a ‘roadmap’ for easing restrictions in the country giving many a light at the end of the tunnel. It comes as Australia’s coronavirus case count has dropped considerably in the last month owing to tough social restrictions and a ban on foreign travellers from entering the country.

The federal government announced in a press conference on 8 May the country will undergo three stages of easing social restrictions, adding that outbreaks and state inconsistencies are expected in the coming weeks and months.

“Today the national cabinet agreed on a three-step plan and a national framework to achieve a COVID-safe economy and society,” Prime Minister Scott Morrison said.

“It is our goal to move through all of these steps to achieve that COVID-safe economy in July of this year.”

The Chief Medical Officer, Professor Brendan Murphy, added that the steps are designed to ease into a return to the way things were prior to the pandemic given Australia is one of the first countries to experience a significant drop in cases.

“Step one is cautious. It’s gentle. It’s not doing too much at once,” Professor Brendan Murphy said in the press conference.

“We’re in uncharted territory. There’s not many countries in the world like Australia that’s in a position to start gently relaxing measures with such low case numbers. We don’t want to lose the control we’ve got. We want to make sure that outbreaks that occur are managed and controlled.”

Both Morrison and Professor Murphy were quick to caution that the federal recommendations might not be passed down to the states and territories if local situations don’t see fit. Instead, they provided a guide of some of the measures that could be eased, such as re-opening restaurants to limited customers, but ultimately left the decision to follow those recommendations in the hands of state premiers.

“If the states and territories choose to implement in stage one, [restaurants] could start with 10 people… For a pub and club, that would be a pretty small restaurant,” Professor Murphy said.

“The general view is that, with the exception of the Northern Territory, which is moving forward more quickly, that it will be level three before bars and nightclub-type venues without seated dining would be open and gaming-type venues.” 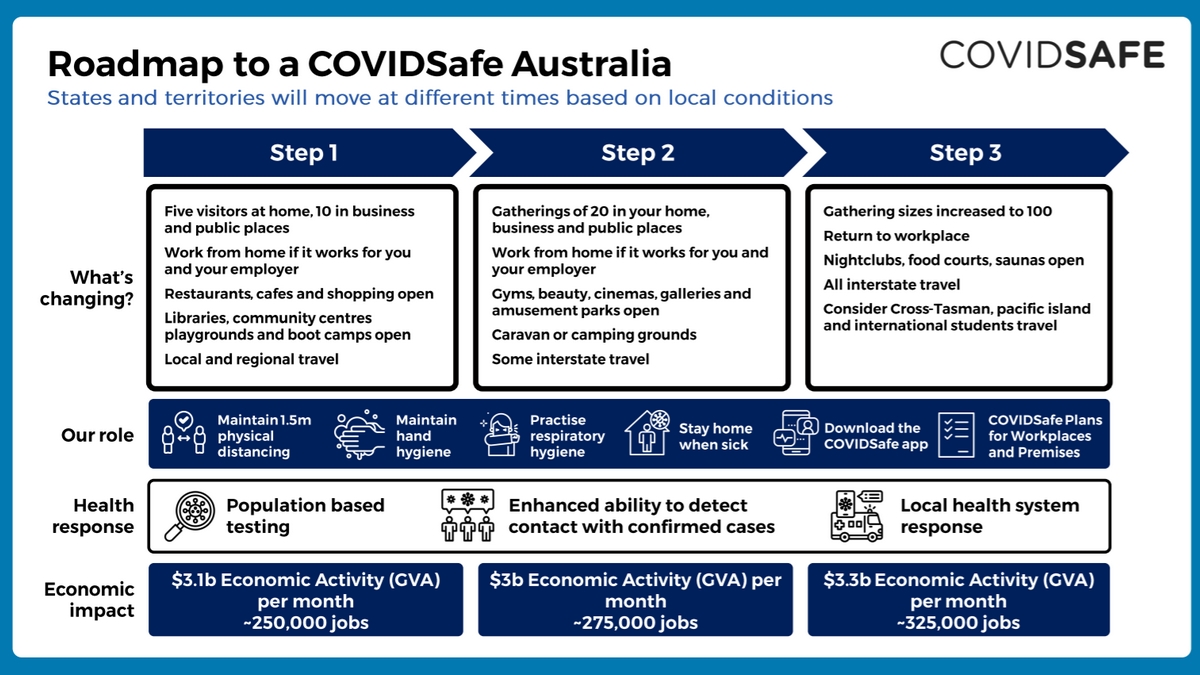 A summarised overview of Australia’s ‘roadmap’ out of coronavirus restrictions. Image: Supplied

The steps provide some insight into what the timeline will look like for businesses and the public in general to plan for the future such as a return to workplaces, community sports and domestic travel. It’s important to note that these changes don’t apply nationally — Here’s what each stage looks like.

Step one of easing coronavirus restrictions

The home visitor has been increased to five people, however, up to 10 people can be allowed in businesses and public places if states and territories permit it.

Step two allows for an increase of up to 20 people in gatherings, home visits and businesses around Australia, pending each state or territory’s decision.

Working from home is recommended for many where possible but you can expect to be able to visit gyms, cinemas, amusement parks and beauty salons again. Travel will still be restricted but it’s expected some interstate travel will be re-open depending on each state or territory’s situation.

Morrison has said he expects step three will be in place by the end of July if the current trajectory continues, which will see a return to some of the initial restrictions placed at the beginning of the coronavirus outbreak.

This means gatherings will be allowed to host up to 100 people, people will return to workplaces and nightclubs, food courts and saunas are all back on the cards.

It’s also expected that some international travel will re-open including the potential for Australians to travel to New Zealand for leisure — just in time for the ski season.

What You Can And Can't Do During Australia's Coronavirus Shutdown

Restrictions announced across Australian states and territories have changed daily routines for millions around the country. Given the number of measures in place, there's still some confusion over what we can and can't do in the times of coronavirus. Here's what you need to know.