These Australian Jobs Remain Steady Despite The Coronavirus Shutdown

With a number of non-essential services being forced to shut down in the wake of the coronavirus spread, jobs across the country are disappearing at an alarming rate. Despite the bad news, economists believe the downturn is temporary and with other industries maintaining steady in the meantime, there’s still hope.

In mid-March, the federal and state governments ramped up restrictions to non-essential services and venues, resulting in a number of job losses and stand downs across the country. Many industries are reeling from the effects and as a result, popular job search sites like Indeed and SEEK have noted big changes in hiring trends.

Callam Pickering, Indeed’s APAC Economist, told Lifehacker Australia that while things were grim for the moment, job availability is expected to recover when conditions improve.

“The labour market will remain weak until the lockdowns are either partially or fully lifted. Most businesses cannot operate right now, or at least not to the same degree they could during normal times, and so hiring or expanding will not be on the agenda,” Pickering said to Lifehacker Australia over email.

“Strong fiscal support from federal and state governments will help the economy recover when normality resumes but the economy won’t return to where it was before COVID-19 for a number of years.”

With that said, a number of industries have undertaken less damage than others with job offerings still taking a dip but not to the same extent as others.

Some jobs remain steady even as Australia goes into hibernation

Job postings across the board have taken a dip with the figure being 41 per cent down on the same period last year, according to a report from Indeed.

Usual year-on-year trends show job postings pick up through March and April after the Christmas and New Year lull but 2020’s unexpected pandemic is tearing projections to shreds. 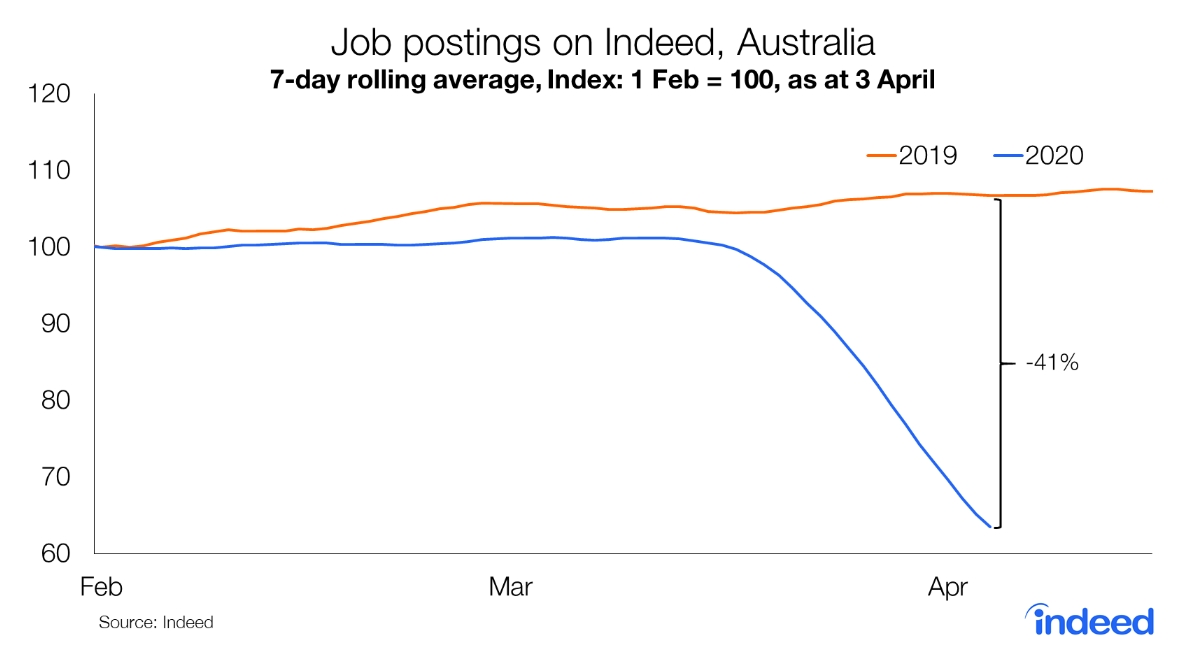 Despite the graph highlighting the dramatic dip in job postings, Pickering points out there are some sectors defying the major drop.

“Healthcare roles are, in general, outperforming the national average. Although to be clear, job postings for every sector are now below their trend at this point last year,” Pickering said.

“There has also been strong demand for workers across Australia’s supermarkets, with both Coles and Woolworth announcing widespread hiring to meet growing demand.”

It should come as no real surprise that Indeed’s figures show the hospitality and tourism sector have been hit the hardest with job postings on the site down by 77 per cent. Following close behind are the beauty and wellness and childcare sectors with 65 and 62 per cent downturns, respectively.

“The hardest hit sectors have been those directly impacted by COVID-19 lockdowns,” Pickering said to Lifehacker Australia.

“Conditions across these sectors are unlikely to improve until lockdowns are lifted but even then the recovery is likely to be slow since the economy will still be much weaker than it was prior to COVID-19.”

It’s no real surprise these are the sectors being most affected by the unprecedented global health crisis, according to Pickering, but he said it’s been amplified by Australia’s swift response to the situation.

“The best and worst performing sectors align closely with what we’d expect to see in a pandemic-type event. No surprises there,” Pickering said.

“What is surprising is that Australia seems to be suffering more from a hiring perspective than other countries, such as the United States or United Kingdom, that have been hit by COVID-19 to a much greater degree.

“This perhaps reflects the more decisive action by our state and federal governments, shutting down the economy earlier than our global peers.”

Morrison has repeatedly stated his hopes for Australia’s economy to bounce back after the so-called economic ‘hibernation’ but Pickering said it might not be that simple.

“Based on previous recessions, and the global experience from the global financial crisis, it could take 5-10 years for the Australian economy to return to what it was pre-crisis. Quite simply, recessions leave scars that take a long time to heal,” Pickering said.

For those Australians left without a job during the turbulent times, the government announced a JobKeeper package intended to keep workers stood down during the shutdown on the books.

The changes mean eligible employees can now request the payments on behalf of eligible employees so they can receive up to $1500 a fortnight. The policy includes full-time and part-time workers but casual employees that had been with a company for at least 12 months would also be eligible.

Pickering said it might be tough when restrictions do lift and these income supplements are reviewed as the retail and hospitality sector will need time to recover.

“Retailers are obviously in a tough spot, although moving more of their business online will provide a lifeline. Most restaurants have low profit margins and are therefore particularly susceptible to disruptions in their operations,” Pickering said.

“The unfortunate reality is that a lot of businesses in these sectors will go under even with government support.”

In light of the economic ramifications of the coronavirus outbreak in Australia, the government has announced a new suite of welfare packages to help Australians who've found themselves out of work with the new shutdown restrictions or economic downturn. Among them are the JobKeeper and Jobseeker payments, which are a little confusing at first. Here's what you need to know.