What You Need To Know Before You Start Cloth Diapering

When I was pregnant with my son, my husband and I became committed to cloth diapering. So committed, in fact, that I bought a huge stash worth a couple hundred dollars (an investment) and washed and hung them to dry long before the kid was even born. So committed that we told everyone how committed we were.

Nearly 10 years later, I am here to do for you what I couldn’t do for myself. I am here to help you successfully cloth-diaper, should you choose to do so. (And if you choose to say, “Nah, I’m good with disposables,” God bless. Totally get it.) 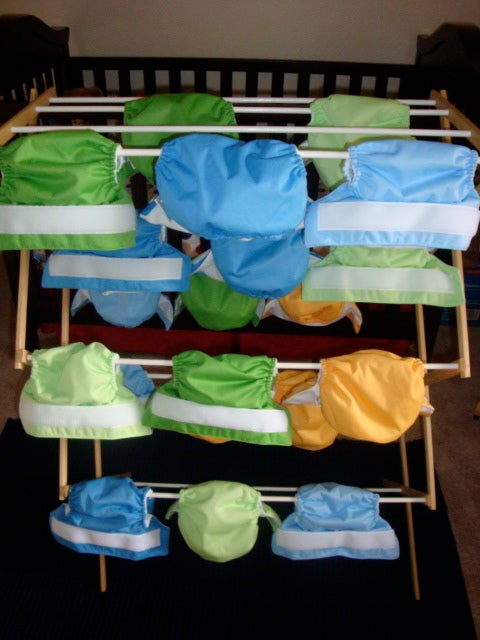 Why even bother with cloth?

Cloth diapers saw a resurgence in popularity in the past decade or so because of their perceived eco-friendliness and affordability, compared to disposables. But there is much debate over whether cloth diapers are really that much better for the environment (or your bank account), once you factor in the water and energy usage needed to clean them, detergent costs and the environment impact of the materials from which they’re made.

In other words, if you use a large, brand new supply of cloth diapers for just one child, you’re probably not doing the environment or your finances any favours.

But parents don’t use cloth diapers just because they think they’re saving the environment or their bank accounts by doing so. One parent in our Offspring Facebook Group, Clovis, sums it up this way: “Cloth makes it so that kids can feel the wetness, which keeps them from sitting in filth for long periods (and eases potty training). Lots of people report less rash. Lots of people report fewer blowouts. My niece blew out all of her disposables, but never had leaks with cloth. So, there are lots of reasons to cloth diaper, not just eco-friendliness.”

And you can do things to further limit the financial and economic impact of cloth diapers, such as buying secondhand supplies, using them for more than one child and line-drying them in the warmer months.

Disposable diapers may come in different brands, but they really only come in one basic style. Cloth, on the other hand, comes in lots of different brands and styles, so it’s important to first get some of the lingo down.

Sizing for cloth diapers varies, depending on the type of diaper and the particular brand, but here’s a basic overview of the most popular styles of cloth diapers:

These are the most similar to disposable diapers. They look like disposables (but way cuter) and you wrap them around the baby and secure them—with snaps or velcro—the same way you would with disposables.

In an AIO, the outer layer is waterproof while the inside has an absorbent layer. They typically come as “one size fits most” for babies approximately 12 to 30 pounds, although some brands offer wider sizing options. The trade-off for the ease of an all-in-one is that they can take longer to dry and they’re typically the most expensive option.

Many cloth diapering parents like to have at least a few AIOs on hand, particularly for use by family members, babysitters or other caregivers who may be inexperienced with cloth.

AI2s and pocket diapers come in two pieces—a cover and an absorbent insert. In an AI2, the insert snaps or lays inside the cover (and some inserts may be disposable). They are trimmer than AIOs and because the insert is separate, it can often be pulled out and the cover reused, which makes them more economical.

AI2s dry faster than AIOs; however, the inserts may bunch or move while in use, they require an extra step than the AIOs and they may not be great at containing poop.

AI2s are similar to pocket diapers, with the main difference being that pocket diaper inserts are stuffed into the diaper rather than laid inside the cover. You can stuff them with however many inserts you need, though, which makes them customisable. The insert and cover of a pocket diaper will need to be washed after each use, but because they are two separate pieces, they will dry faster than AIOs.

Fitted diapers look and operate like an AIO but they are absorbent all over, rather than just in the wet zone. They tend to be great for heavy wetters (and they contain newborn poop well) and are a good overnight choice.

To be fully waterproof, though, they need a separate cover, although some hybrid fitteds can be used without a cover.

A prefold diaper is a rectangular piece of fabric with an absorbent layer of fabric in the middle. These—plus “flats,” which are squares or rectangles of fabric—are what most people think of when they think “cloth diapers.”

Prefolds can be folded around the baby and held together with pins, Snappis or Boingo fasteners. Prefolds come in different sizes, while flats are truly one-size-fits-all. Both options are versatile in the way you fold them and even what you use them for (you can repurpose them as burp cloths or cleaning rags when you’re done using them as diapers).

They require a bit more skill and practice, at least in the beginning until you get the hang of it, but they’re also inexpensive, absorbent and easy to clean. Note that you will need a separate diaper cover for prefolds and flats to make them waterproof.

For more details on the different cloth diaper types, materials, pros and cons, Fluff Love University is the place to go.

How to clean them

There’s a reason why disposables were invented to begin with and it’s not just because we’re a naturally wasteful society. It’s also because dirty diapers are gross. And dirty diapers you can simply throw away are less gross than dirty diapers you have to clean yourself.

But many cloth-diapering parents in our Facebook Group swear that cleaning them is really Not That Big Of A Deal. If you know what you’re doing.

To start with, we should note that cleaning the cloth diapers of breastfed babies will be different that those who are formula-fed or eating solids. Liz Kay at ecoRI News explains:

Breastfed babies have water-soluble bowel movements, so for the first few months we would put the diapers in a wet bag until laundry day. Formula-fed babies and kids old enough to eat table foods have more solid waste. At that point, you can use a diaper sprayer—picture the one next to the faucet in your kitchen sink, only this time attached to a toilet tank—or put flushable liners inside diapers to catch any solid waste. We use flushable paper liners and wash and reuse them if they are just wet.

Now, before you dive in with your own diaper-cleaning routine, check the recommended wash instructions from your particular cloth diaper’s brand. They’ll have the best advice for how to most effectively care for their product (and not following their instructions could mean voiding any warranty you have).

Generally speaking, most parents who cloth diaper wash them approximately every 1-3 days. After that, they’ll start to stink and stains will set in. You’ll want to use a detergent that is gentle and effective and recommended for washing cloth diapers—many regular detergents can cause buildup that could lower their absorbency or even cause diaper rash.

You’ll probably want some kind of wet bag to store the dirty diapers (it’s good to have a few in different sizes, particular if you cloth diaper on-the-go). We personally purchased Planet Wise bags in three different sizes and even though we only cloth-diapered for, like, five minutes, I still have and use those bags for other things many years later.

You know what is the ultimate cleaning accessory, though? A cleaning service. Several parents in our Facebook group agreed that, if you can afford it, a local cleaning service the best way to streamline the whole system, especially at the beginning. Group member Jen says:

Ours was amazing. They came and showed us how to use them, helped us after baby arrived when we were freaking out not knowing if we were doing it correctly, gave us a bin and liners to collect soiled diapers, provided covers (we used our own covers too based on recommendations of our friends) they picked up soiled and dropped off fresh 2x a week so nothing got stinky, we had unlimited numbers of liners so we never really ran out. And we never had to deal with washing!

Remember that you don’t have to go “exclusive”

This advice comes to us from Facebook Group member Dorothy: “I just want to say it’s totally ok if you only CD (cloth diaper) part-time! We CD during the day and use disposables at night/on vacation/if I just really need a break. That last scenario hasn’t happened yet but I do appreciate having disposables in his size available in an emergency.”

The same way it’s totally ok to pair breastfeeding with formula-feeding, you don’t have to think of cloth diapering as the only way you are allowed to diaper from now on. This was probably my own downfall; I got frustrated, I was tired and overwhelmed, and I gave up.

You don’t have to be like me. Balance is a good thing. Want to use cloth diapers at home but throw on a disposable to make life easier when you head out for a playdate with friends? Do it! Take your time and figure out a system that works best for you.

A couple of thoughts to wrap up our Great Big Discussion About Cloth Diapers. First, before you commit to a specific cloth diapering system, check in with any childcare providers you’ll be using to see what their policy, experience and comfort level is. Most providers will be happy to accommodate your needs, but it’s best to check first.

And finally, it’s important to acknowledge that although cloth diapering is likely the more affordable way to diaper overall, it also requires a heftier up-front investment, which makes the option much less feasible for low-income families.