This Is The Proper Etiquette For Leaving A Hotel Room 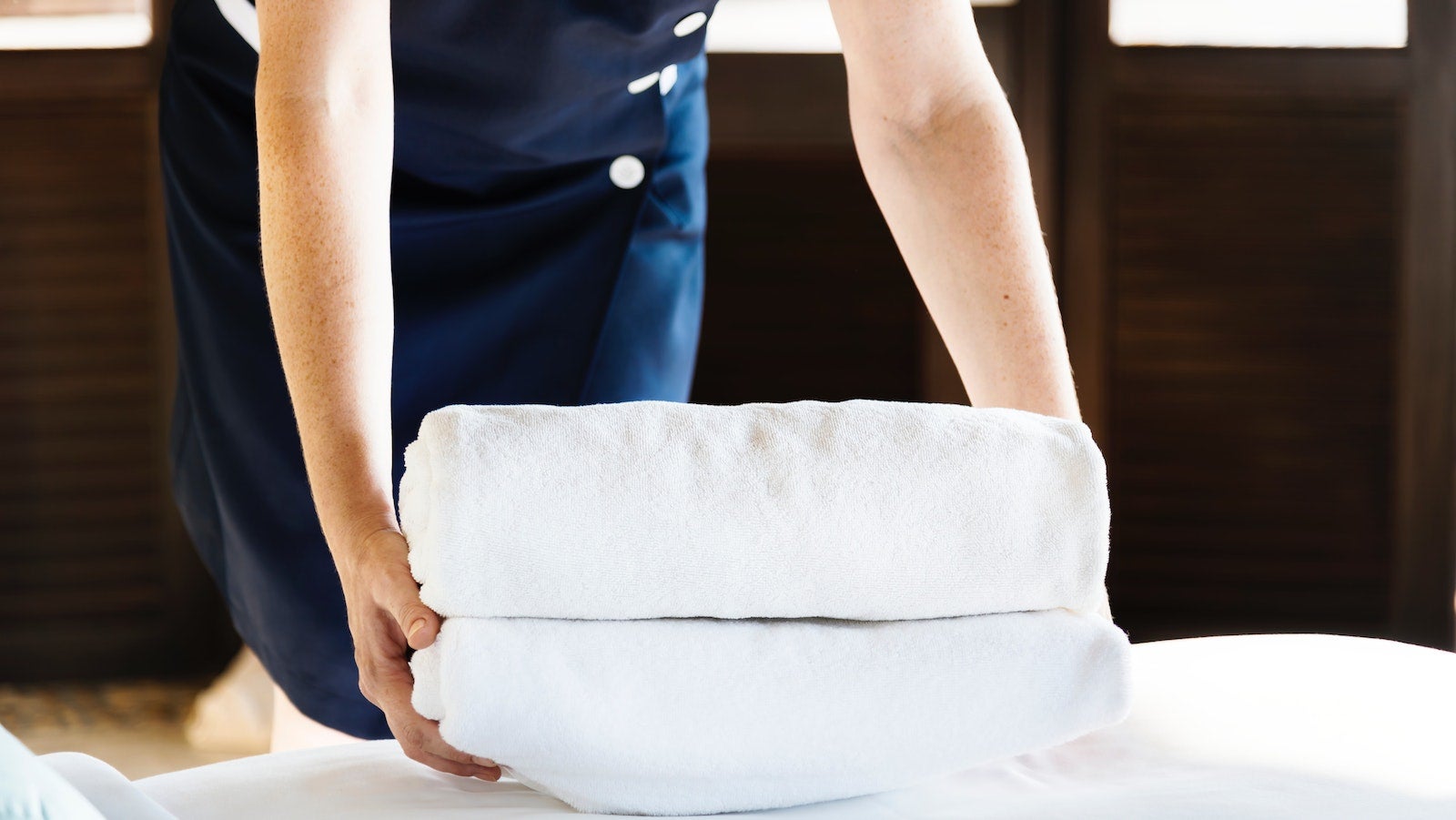 During your vacation, a hotel room is your home away from home, but it’s much better than your actual home because you have fresh sheets every day. Here’s how to properly thank and respect the person making that happen.


Stephanie Land is the author of best-seller Maid, about her time working in housekeeping while supporting her daughter and earning her degree online. Land’s situation was in no way unique; many people are making their living in the service industry, and the standards for how they’re paid and treated vary widely.

As a traveller, you can raise those standards via your own behaviour, and Land tweeted out her suggestions for how you should leave a hotel room when your stay is over.

The luxury of having lots of clean towels in so many shapes and sizes can quickly go to your head. Have you been getting fresh ones every day? Or have you just been accumulating them like a towel hoarder? Land writes that you should gather them up in a pretty specific way for the ease of the person picking them up for cleaning, by balling them up with the “washcloth in the middle,” probably because the washcloth is the wettest and filthiest of them all.

You’re not going to vacuum or scrub the sink, but there are some basic things you can do that will make a hotel housekeeper’s life much easier; people do some gross stuff in hotels and the basics Land outlines paint a picture:

Pick the hair out of the drain. Flush the toilet. Put garbage in the garbage.

You wouldn’t think flushing the toilet needs to be said, but apparently it does, so please do.

To disturb or not to disturb

Land did not bring up the Do Not Disturb sign, but it became a point of contention in the comments; theoretically, you could leave your DND sign up throughout your stay, limiting the amount of work a cleaner has to do. Unfortunately, it’s not so simple. For one, as a post on Travel Skills points out, the DND sign is not a legally binding contract. Hotel cleaning and management can and will enter your room despite the sign, and apparently, guests often lie about leaving the sign off when they come back to a filthy room:

Guests will frequently leave the DND sign on their door when they go out for the day. Then when they return they think that somehow, magically, their room was supposed to have been cleaned without someone violating the DND sign. Then they’ll call down to the front desk and complain that their room was not cleaned and flat out lie about having left their DND sign on the door. This happens so often it’s crazy.

But in the context of how your helping or hindering staff, not allowing cleaning into the room means you’re likely cutting into their paycheck. In many countries staff don’t get paid for rooms they are assigned but do not clean.

So, let the workers do their work — they might just go ahead and do it anyway, and you can at least plan to hide your naughty stuff ahead of time.

While tipping isn’t mandatory in Australia it is expected in some countries when you’re travelling abroad, particularly America. How much you should tip is debated a lot, but it is determined in part by the cost of the room and how much you had your room cleaned. Land writes:

Tip. ($US10 ($14)/day, per person who stayed) If your stay is multiple days, tip every day you expect cleaning service. Seriously.

In 2016, Trip Advisor closed this post on tipping which offered these basic guidelines:

$US2 ($3)-3 per night up to $US5 ($7), more in high-end hotels. Also more if there are more than 3 people in a room or suite. Leave the tip on your pillow or in a similar obvious place with a note that says thank you. Leave the tip each day when you leave the room, rather than at the end of your stay, because your room might get cleaned by different people each day, depending on staff schedules. If you have additional items delivered to your room, such as extra pillows, hangers, luggage racks, tip the person who brings them $US2 ($3) or $US3 ($4).

With some cost-of-living inflation, $US10 ($14) seems to be in the right ball park, and the point about doing it daily as you receive service is a good one. People work different shifts, so tipping at the end might mean someone gets left out of the tipping pool. Land added that putting the tip in a card with a thank you is way to make sure they receive it:

Leave a note that says thank you with the money under it.

If you’d like to do a few extra things to help out, Quora interviewed Bruce Claver, who has worked for decades in hotel management. He offered this list of small things that will make workers lives much easier:

Strip the sheets off the bed and pillow cases and leave in a pile on the floor opposite the bathroom door.

Take all used towels, washcloth, and bath mat and place in one pile on the bathroom floor.

Replace the tv remote to where it was on checkin day

And never, ever make the bed. They’ll just have to un-make it.