You Can Make Your Own Corn Milk (and Cook With It)

How to Stop Videos From Autoplaying All Over the Internet

The Financial Advice All Experts Agree On

Personal finance is like nutrition: It seems like the experts in this arena can’t agree on anything, whether it’s setting up an emergency fund or paying off your mortgage early. Despite all the contrasting opinions, though, most people agree on at least five basic fundamentals. This article was written in partnership with CUA, helping you boost your savings while you spend with Savings Top Up. Click here for more..

Money management might seem complicated because of the conflicting, ever-changing advice we hear (Save 10% of your income! No, save 15%! Pay your high-interest credit cards first! No, pay the smallest balance!), but personal finance is actually pretty simple. After reading (or re-reading) some of the most popular books about personal finance and other classic advice from money experts, I realised that they really only argue about the details — how much to spend or save and where (use my plan! No, use mine!) — but their advice generally boils down to: use money to get to financial independence, know where your money is going, avoid expensive debt, and use the power of compound interest.

Money Is Just a Tool for Financial Freedom

Let’s start with what we can all agree on but perhaps doesn’t get talked about often enough: Money is really just a tool.

You might not think it from all the books and articles with titles like Instant Millionaires: The Secrets of Overnight Success, which seem to encourage amassing the most amount of money as quickly as possible, like Smaug sitting on a mountain of gold. If you look at what personal finance experts are really selling, though, it’s not getting rich for the sake of getting rich — it’s financial freedom. Freedom from crippling debt, freedom from constantly worrying about money, and the freedom to provide for your and your family’s basic needs and comforts. That’s what we’re doing this for. Money is just the tool that gets you there.

Dave Ramsey’s mantra in The Total Money Makeover is “if you will live like no one else, later you can live like no one else.” That is: make hard money choices now so you can have financial freedom later. I Will Teach You To Be Rich‘s Ramit Sethi says that most people couldn’t care less about “the 7 types of bonds” or how personal finance works — they just want to be in control, not worry about money, maybe even indulge occasionally. And one of the basic premises of Your Money or Your Life is that money is really your “life energy”: You trade your energy and time for money, so you should manage your money wisely.

We simply get off track financially when our money doesn’t have purpose and we forget about using this tool efficiently to reach our goals.

The Only Way to Build Wealth: Spend Less Than You Earn 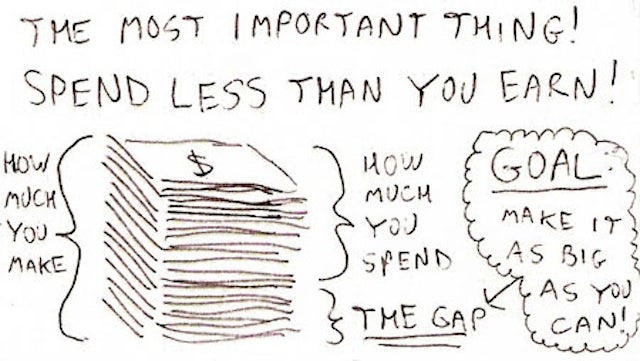 The biggest consensus among money experts is the most obvious money truth: you must spend less than you earn to build wealth. Some people turn it around to focus more on the earning part of the equation: earn more than you spend (e.g., instead of looking for discounts, find new income opportunities). But either way, it’s the same thing. The only way to improve your finances or even stick to your budget is to create a gap — as large as possible — between your income and your expenses. In other words, live within your means (and then use that excess to pay down debt or save for the future).

It’s not really groundbreaking advice (nor very helpful as advice to those who are having trouble making ends meet), but it’s a financial truth or principle that everyone agrees on — and one that people of all income levels should aim to follow, but usually don’t. As The Millionaire Next Door notes, there are even high-income people who spend more than they make. But having a high income is not the same as having lots of wealth. The people who become millionaires are the ones who mind the gap.

Expanding that gap is the only we can build an emergency fund, build net worth, pay off debt, or even afford a nice holiday. So if you buy a book that promises to teach you everything about money and it doesn’t include this principle, you should ask for your money back.

You’ll find more specific recommendations on how to save more and spend less from a variety of personal finance sources, including I Will Teach You To Be Rich, which offers scripts for negotiating your bills down, and Mr. Money Mustache, which offers great examples of frugal living. They don’t always agree on the best tactics, but the end goal is always the same: spend less than you earn.

If You Don’t Know Where Your Money Is Going, You’re Likely Wasting It

If it’s so simple — spend less than you earn! — why can’t most of us do it? Early in my financial journey, I was one of those “yeah, budgeting sounds great but I’ll do it later” people. It wasn’t until I actually started tracking my spending (like a business, actually) that I understood just how bad the spending vs. earning deficit could be. It’s kind of like managing your weight: You have to get on the scale and be conscious of what you’re eating every day if you want to make any sort of improvement. Many of us don’t track our weight or our spending.

Experts are still mixed on whether budgets work for most people, but just about every basic personal finance book advises we at least start by taking a financial snapshot of our spending. Where is the money actually going? Step 1 of I Will Teach You To Get Rich’s program is to know where you spend your money. Likewise, Sue Orman’s first step in her financial Get a Grip checklist is to track your spending. Your Money or Your Life also asks you to track your spending, not as some sort of penny-counting torturous exercise, but to be able to map out your relationship with money and record your progress. Tools like Mint make it dead simple by tracking everything for you automatically.

One of the most poignant stories in The Richest Man in Babylon is about a guy named Dabasir who had lived an extravagant lifestyle, living beyond his means and racking up debt, and eventually was sold as a slave. His road to recovery (after escaping slavery) was to create a plan with each of his creditors and pay them 20% of his income, while saving 10% for his retirement and living on 70%. It took determination. The book was published in 1926, but we’re still talking about this strategy decades later, in the form of the 20 Per cent Payment Plan.

If you have high-interest debt, paying it off is the best financial return on your investment you can get. Experts only differ in which order you should pay back debt — smallest balance first (Ramsey), highest interest rate first (Orman) — and whether to pay off debt before putting money in your savings. The experts don’t agree on this either, but consider which debt is good or bad and its interest rate.

Compound Interest Is the Most Powerful Force in the Universe 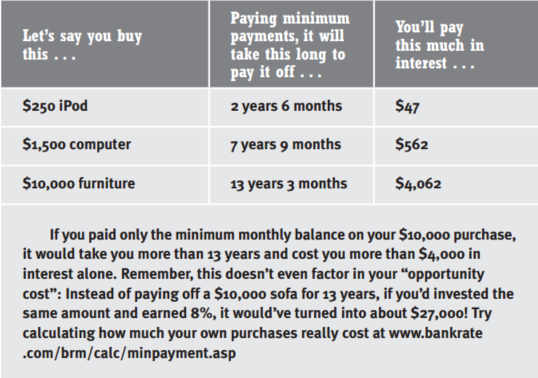 Interest may seem tiny — after all, it only measures a few percentage points in most cases — but it’s actually an extremely important element of personal finance. It can help you or hurt you in a huge way. It’s why everyone agrees we shouldn’t carry expensive debt and why just about every financial expert says to invest your money.

Take credit cards, for example: carrying a balance can quickly dig yourself into a financial hole. Sethi points out:

It may be incredibly convenient to swipe your card at every retailer, but if you don’t pay your bill the same month, you’ll end up owing way more than you realise. Take, for instance, an iPod. It looks like it costs $250, but if you buy it using a credit card with the average 14% APR and a 4% minimum payment, and then only pay the minimum each month, you’ll be out almost 20 per cent more in total.

That’s why just about everyone, Warren Buffett included, recommends saving as early as possible and “paying yourself first.” From The Total Money Makeover:

[A] note to all of you under forty: all of us over forty are giving you a collective yell, “INVEST NOW!”

Baby Step Four is not “Get rich quick.” The investing you do systematically and consistently over time will make you wealthy. If you play with this by jumping in and out, always finding something more important than investing, you are doomed to being one of those 54 out of 100 sixty-five-year-olds still working because you have to work. Systematic, consistent investing is the tortoise that beats the hare in the race. When you keep at it, the investing compounds and explodes.

(Explodes in a good way.)

All of the above are very basic, simple principles about money, which is why just about everyone agrees on them. Even though money advice tends to be generally the same, however, this isn’t to discount the value of continuing to read about personal finance. The way some advice is given will appeal to you more than advice from another expert, and one plan or strategy might work better for you than others. Remember, financial success if more than just maths, too, it’s about mindset. That’s also something most people know about money, but perhaps don’t think about very often.