While the bushfires themselves present the biggest threat to human lives, another lurking danger is impacting the health of thousands more: smoke pollution. You’ve probably seen a bunch of scary looking numbers in the news but what do they actually mean? Here’s how to decipher the air quality index (AQI) in your area – and what to do when the level becomes dangerous.

How Sydney's Smoke Pollution Is Affecting Your Lungs

After stepping out in Sydney on Tuesday, it will feel like you have smoked three packets of cigarettes – at once. The streets are blanketed in thick smoke, the sky is orange, the smoke is seeping into buildings and residents are struggling to breathe.

Much of Sydney and NSW is choking as poor conditions have brought dense bushfire smoke from around the state and dropped them square in Sydney’s basin. While conditions vary from day to day, the city’s air pollution has spent a number of days hovering well above the limit marking hazardous levels making it one of the most polluted cities in the world as of late.

What is the air quality index?

Simply put, the air quality index (AQI) informs us about information regarding air pollutants as well as measurements of ozone, carbon monoxide, sulfur dioxide, nitrogen dioxide, airborne particles and visibility. In NSW, where the majority of the bushfires are still ravaging land and homes, the Department of Planning, Industry and Environment (DPIE) provides up to date readings on all of these facets, which help to give health professionals, government agencies and general citizens a better idea of the quality of the air we’re breathing.

A number of places provide AQI ratings in cities around the world but the department posits it’s the most reliable in NSW.

“The NSW Government operates the most comprehensive accredited air quality monitoring network in Australia, now with approximately 90 stations, including emergency temporary monitoring stations across the state, and we have been working to broaden the network into more regional areas in consultation with local councils,” the department told Lifehacker Australia.

“This ensures that the community of NSW has accurate and up-to-date information about air quality that government agencies and others can use to provide high-quality, reliable information for the public on health, land management and regulation.

“The website provides AQI hourly data from the network of monitors across NSW in its full detail as it is has a number of end users including health professionals and carers, the EPA, other agencies and academics.”

The department provides the data in a colourful table to help us read all these ratings but it’s gotten some people confused about what numbers and columns matter most. 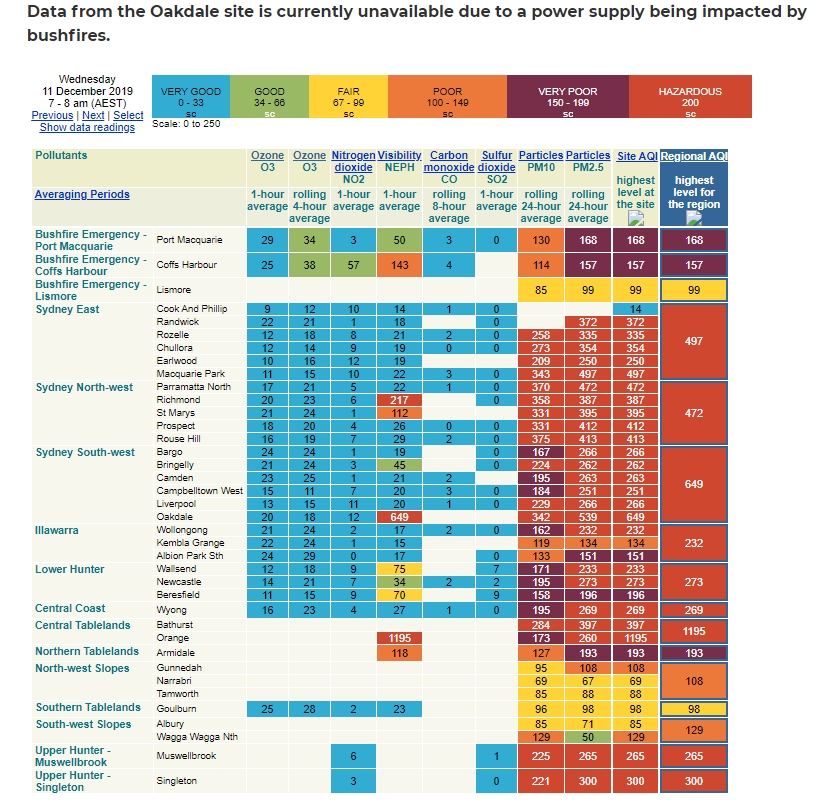 How do I read the AQI index?

While each column specifies the what the numbers are supposed to represent, it’s not necessarily that clear cut. All the columns are important but the ones specifically being affected by the bushfire smoke pollution relate to the four columns on the right: Particles (PM10 and PM2.5), Site AQI and Regional AQI.

Particles PM10 reports on the 24-hour rolling average of particulate matter 10 micrometres or less (AKA PM10) within that particular monitoring station. For example, Rozelle recorded a rating of 258 of the 24-hour period, which could include particles of ash from the bushfires, sea salt, crushing or grinding operations and dust stirred up by winds over exposed soils or vehicles on roads. This contributes to visibility as well.

The next column records PM2.5, the more dangerous of the two pollutant particles. This is because the particles measure 2.5 micrometres or less and can nestle deep in lungs as well as pass directly into the bloodstream. Using Rozelle as another example from the table above, it measured 358.

The next column over is Site AQI, which records the highest recorded level for the site, while the far-right column, Regional AQI, measures the highest Site AQI over the region. For Sydney East, where Rozelle is situated, the record high sits at 497.

The numbers on this table are also split into ratings depending on how good or poor the air quality is. Any number up until 99 on these tables is, at worst, fair. After that, the air quality starts to become dangerous and the health department warns those with existing respiratory and lung conditions to stay indoors and for everyone else, to limit their outdoor exercise.

While the scale is theoretically between 0 and 250 ⁠— ⁠anything over 200 is deemed ‘hazardous’—, much of the recent air pollution has far exceeded the maximum rating leading into extremely hazardous levels. The department explained to us that it’s the scaled ratings people should be more concerned with.

“The most important thing to know about air quality is not the AQI number, but the coloured level, which can be rated ‘very good’ through to ‘hazardous’,” the department told Lifehacker Australia. “NSW Health has further information regarding the actions people should take depending on the AQI rating.”

When should I put a mask on?

So, the next question is naturally: What do I do when the air becomes hazardous? NSW Health has recommended staying indoors, shutting windows and using air conditioning. But if leaving buildings is necessary, as it is for most of us, will a face mask help to limit exposure? The health department is cautious to state it’s a perfect fix.

“NSW Health continues to recommend that people with these conditions should avoid outdoor physical activity when there’s smoke around,” Dr Broome said in a media statement.

“The main concern with smoke is the very fine PM2.5 particles, which are so small they pass through most types of mask. A P2 mask does filter out these particles, but is only effective if there is a good fit and an air-tight seal around the mouth and nose.

“Evidence shows that this is difficult to achieve in practice, so they may not provide the benefit people are hoping for.”

Still, a potential benefit is better than none at all. While the department didn’t specify a specific number or rating on when to put a mask on, it’s best to use a mask with a P2 rating when air quality ratings hit ‘poor’ or worse. After all, it has said there is no safe level of inhalation of particle matter for human health.

In cities facing poor air quality on a daily basis, like Beijing, air quality rating monitors are installed in residences to monitor whether how effective your methods for keeping the dirty air out of your home are. Neither the health or environment department specifically recommend these measures but as the days of hazardous readings increase, it might be a piece of technology that will only grow in popularity. Additionally, you can invest in an air purifier system with a HEPA filter built in.

Until then, you can download a number of apps, which will provide easier to read ratings but are not always accurate, or you can subscribe to the DPIE’s air quality rating alerts.

This article was originally published on 11 December 2019.

New South Wales is currently suffering through a severe smoke haze, as strong winds spread bushfire smoke across the state. While many have turned to filtered masks for protection against the pollution, not all masks are effective in protecting against smoke inhalation. For the best protection, you'll need a P2 mask — the kind usually worn by builders.