Uber Rewards Is Coming To Australia – Here’s How It Works

Uber has announced it’s launching Uber Rewards in 2020, making Australia the third country in the world to receive the loyalty program. Here’s how it works and what perks you’ll receive from it.

How To Save Money With Uber Pool

Uber has been around for a while now. It's a great way to get where you're going and save a few bucks along the way - especially if you're willing to share your ride. Here's what Uber Pool is and how it works.

Uber Rewards will be available across the country from early 2020 with customers being able to earn points through both Uber and Uber Eats usage while in Australia and overseas.

How to earn Uber Rewards points?

When you use Uber Eats or Uber Pool, you’ll gain one point per dollar you spend on the order or ride. For rides with UberX, UberXL, Comfort and Assist, you’ll double your earnings with two points for every dollar you spend. If you’re a boujee rider, you’ll get three points for each dollar spent with Uber Premier.

What can you get with Uber Rewards points?

Rather than purchasing goods or experiences with Rewards points, you’ll be placed into tiers depending on how many you have. Uber explains the first tier for baby users is Blue, with Gold (after earning 1200 points), Platinum (4000 points) and Diamond (7500 points) following. 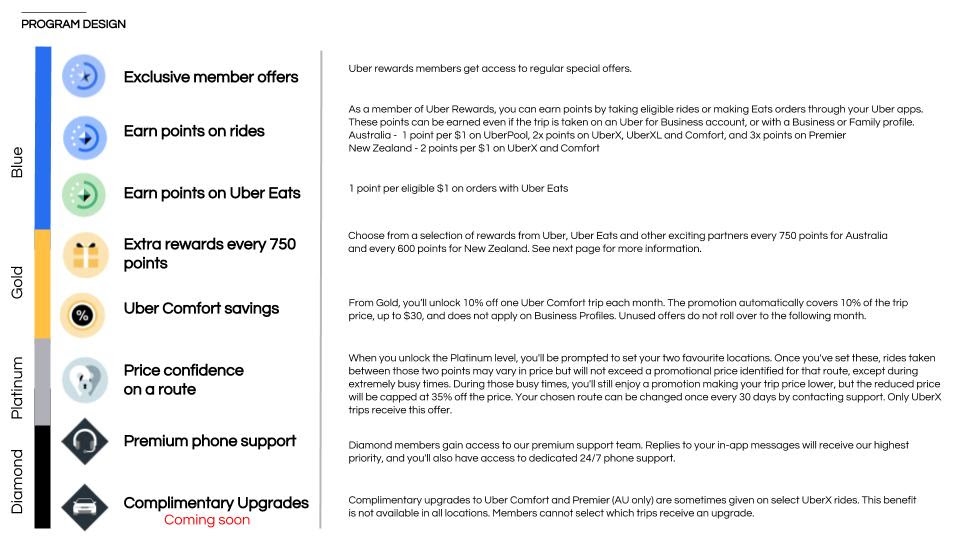 While Blue doesn’t seem to have any benefits other than the privilege of earning points, Gold members will receive 10 per cent off one Uber Comfort trip per month and a reward every time they earn 750 points. Those rewards can include 15 per cent off Uber Eats orders for three days, 15 per cent off all Uber rides for three days or a $10 donation to Paralympics Australia in the countdown to the Tokyo 2020 Paralympic Games. 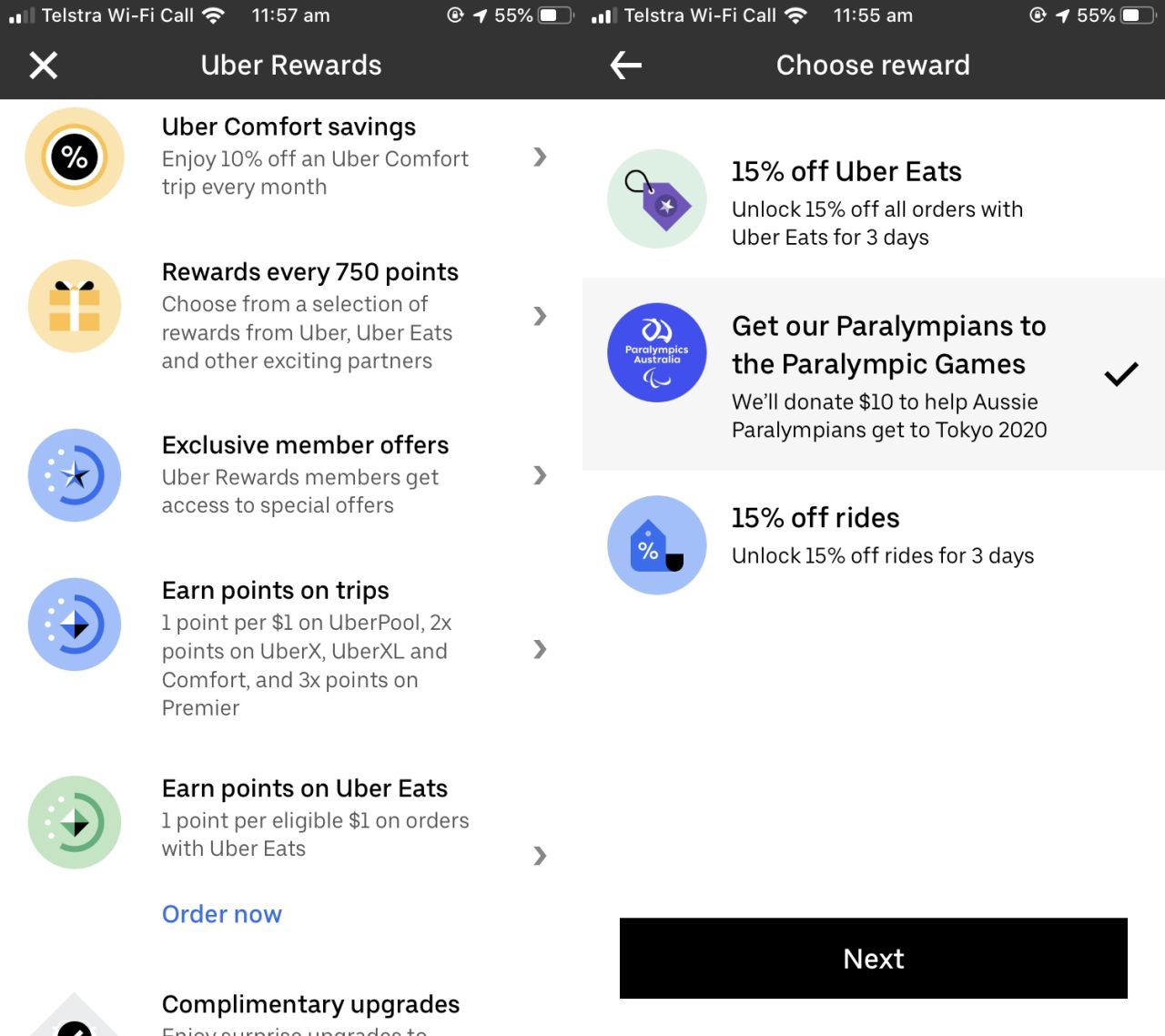 Platinum members get price confidence, which ensures you’re not hit with unexpected surge prices between your favourite routes. They’ll also get the rewards every 750 points and the 10 per cent off deal for Uber Comfort each month.

Uber says Diamond members automatically receive “premium phone support, price confidence on a route of their choosing and a slew of benefits” including upgrades from UberX on selected rides. 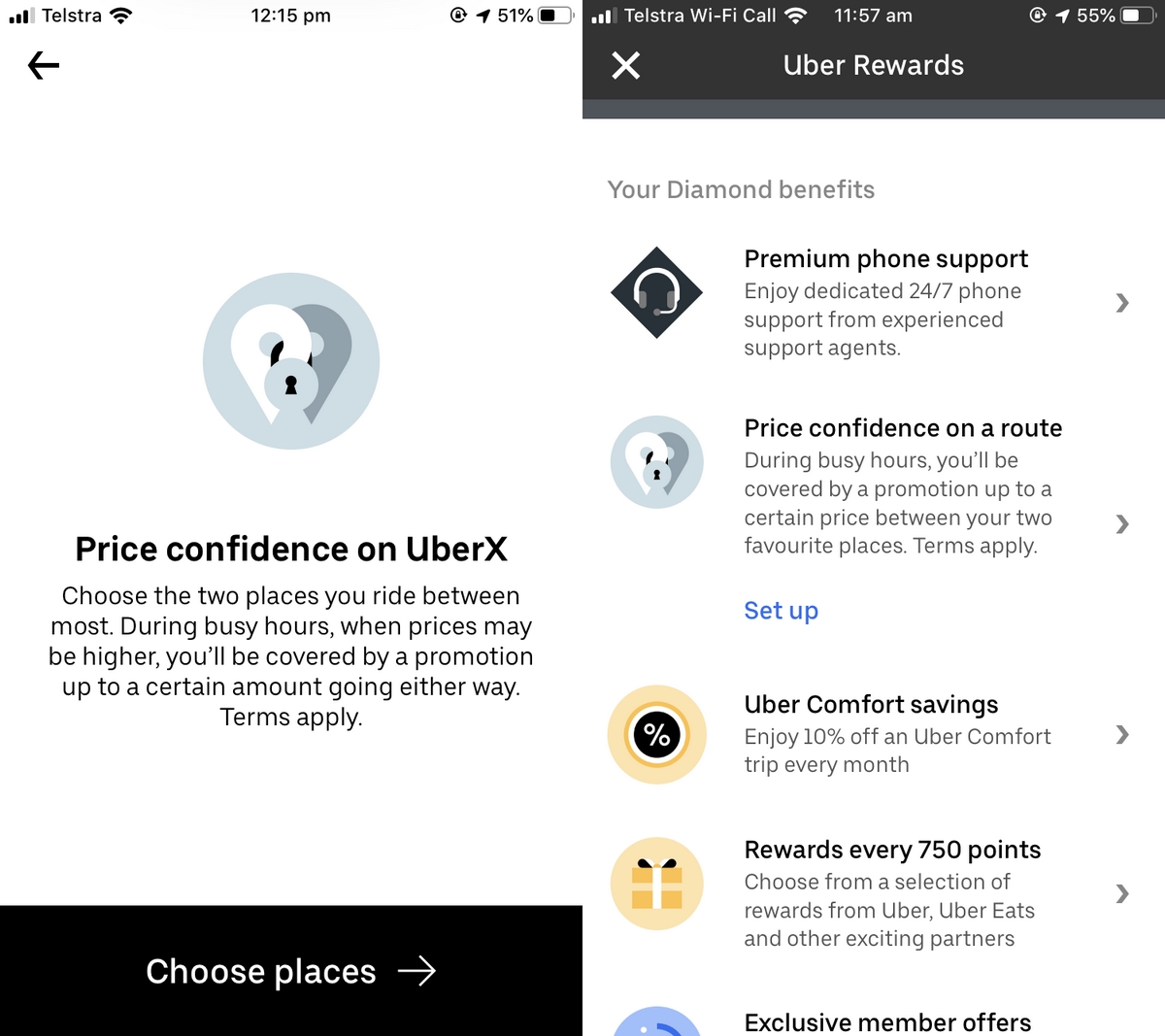 How much would I have to spend to get to the Gold tier?

Let’s talk hypotheticals for a second because while the loyalty program is free, it seems like it would take a bit of an effort to get those sweet perks.

The first tier with rewards, Gold, requires 1200 points. If you were to use Uber Pool and Uber Eats exclusively, it would cost you at least $1200 in rides and delivery orders to get there. Let’s say you you just use UberX and Uber Eats, it would still cost you just shy of a grand if you were to order say $300 worth of rides (600 points with UberX) and $600 worth of Uber Eats (earning you another 600 points). Rewards is better than earning nothing for the money you spent but it’s really only going to benefit those big spenders among us.

Uber has confirmed to Lifehacker Australia that Rewards points expire after six months.

Uber has announced its adding a new feature to its app but only Sydney-siders will be able to use it for now. The update allows users to view public transport options from the start to end of their journey as well as what Ubers are available for them. Here's what you need to know about it.