These Jobs Have The Highest Wage Growth In Australia

Wage growth has been pretty dismal in Australia. However, new data shows there are a few jobs in the country where wages are experiencing higher wage growth than the average. If you want your pay packet to keep ahead of inflation, these are the industries to consider.

What Are The Highest-Paid Jobs In Australia?

If you're looking for a job right now, there's good news and there's bad news.

The Australian Bureau of Statistics (ABS) has released the country’s latest wages data, its Wage Price Index (WPI), and it’s confirming what everyone’s been feeling — wage growth just isn’t happening at a level we’d like it to be.

Data shows for the quarter between June and September, wage growth for the nation had a 0.5 per cent increase but year-on-year, it was at a pretty demoralising 2.2 per cent. To put that in perspective, consumer price inflation (CPI) was at 1.7 per cent.

The ABS states CPI is “a measure of the average change over time in the prices paid by households for a fixed basket of goods and services.” While goods like fuel, fruit and vegetables fell in price year-on-year, items such as international holiday, travel and accommodation, tobacco, property rates and child care increased. Real wage growth is usually calculated by subtracting the average CPI from the average WPI, meaning Australia’s real wage growth average sits around 0.5 per cent.

But when the stats were broken down to a state level, it showed some states were bucking the national average. 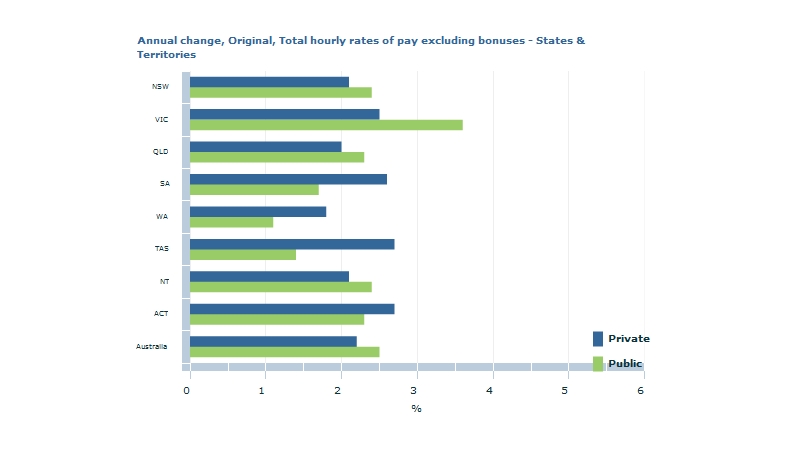 In terms of the private sector, the year-on-year increase was highest in ACT and Tasmania at 2.7 per cent while Western Australia brought down the national average with its 1.8 per cent increase.

It was Victoria’s public sector that really shone in the data, with public servants receiving a 3.5 per cent increase in wage growth while Western Australia rounded out the bottom with a 1.1 per cent increase.

So where are wages growing at a higher rate?

Healthcare and social assistance saw the greatest increase with a 3.2 per cent jump on the previous year’s period with those working in electricity, gas and water services, transport, postal and warehousing, as well as professional, scientific and technical services following closely behind.

Wage growth in the healthcare and social assistance industry is well above any other industry. Huge demand for healthcare & aged care services has underpinned strong demand for workers and higher wages #ausbiz pic.twitter.com/ErzABQxn3V

Some of the worst wage growth seen lay within the information, media and telecommunications services industry with a 1.7 per cent growth. Faring little better was retail, manufacturing, wholesale trade and mining.

Of course, if only it was as simple as quitting your job and finding a new role in those industries experiencing wage growth. But with trends continuing the way they are and the looming threat of automation, it’s a good time to consider whether retraining will help you advance out of a stagnant field. The alternative is waiting for our leaders to proactively enact some future-proofing for Australians outside of the election cycle. I think I’ll go with the former.

The Industries With The Slowest Wage Growth In Australia