How Amazon’s New Echo Studio Compares To Other Smart Speakers

Given just how much audio comes out of Echo speakers — including Amazon’s new Amazon Music HD — we can sympathise with users who prefer other brands with higher quality audio, but Amazon’s newly announced Echo Studio smart speaker claims to overcome the performance limitations of its predecessors (and even some of its rivals).

The Echo Studio will cost $329 in Australia and is slated to launch on November 8 in the U.S. [Australian release date yet to be confirmed], but if you’re anything like me, you’re probably wondering whether it’ll be worth spending a couple of hundreds on it. To that end, let’s look at how the newly announced Echo Studio stacks up to both its older Echo siblings, as well as the high-end models from Amazon’s competitors.

The Echo Studio seems to be a major upgrade over its predecessors for sheer audio output. The Echo Studio features a one-inch tweeter, three two-inch midrange speakers, and a 5.25-inch woofer, which is quite a bit more compared to the 0.8-inch tweeter and three-inch woofer found in the third-generation Echo (which was also recently announced, and will be replacing the previous Echo models when it arrives on October 17 in the U.S. for $149 [Australian release date yet to be confirmed]).

The Echo Studio is also the first Echo device to feature automatic room tuning, which adjusts the speaker’s audio output to better suit your room’s acoustics (measured via seven microphones in the device’s top). Many other smart speakers have had this feature for some time, and it’s good to see Amazon finally include it.

The real question is whether the Echo Studio is any better than the high-end speaker options from Amazon’s rivals — specifically the Apple HomePod and Google Home Max. We haven’t heard the Echo Studio for ourselves so we can’t comment on its quality; On paper, it’s not a huge difference between most other smart speakers in the $300 – $600 range.

The Echo Studio will run for $329, however, which is a full $200 cheaper than either the Home Max or HomePod. If it can come close to matching its rivals for audio performance, that would be a strong plus for the Echo Studio, especially when you factor in all the extra features Amazon has managed to stuff into its new high-end smart speaker. 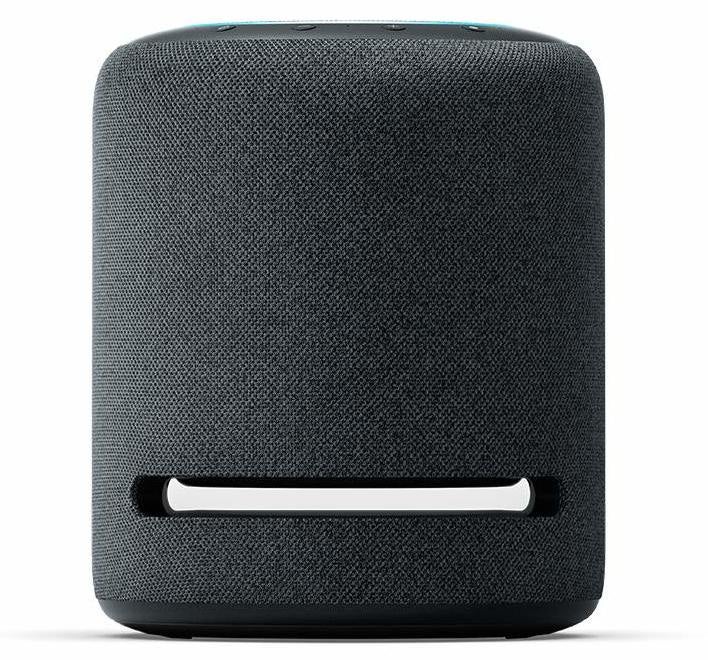 As with other smart speakers, users can pair two Echo Studios together to create a dual-speaker stereo setup, but the Studio Plus can also pair up wirelessly with Fire TV devices to act as a self-contained home audio solution. Some may balk at the idea of using a smart speaker instead of, say, a sound bar or even a 5.1 speaker setup — many of which cost only slightly more and likely have much better audio—but the Studio Echo at least can match some of these products when it comes to 3D audio and device connectivity (at least on paper).

The Echo Studio is the first smart speaker to offer 3D audio via Dolby Atmos or Sony 360 Reality audio. You’ll also be able to pair up the Echo Studio with a wide variety of playback devices and other smart home products via 3.5mm and mini optical Toslink ports, or wirelessly over Bluetooth, Wi-Fi, or Zigbee. That’s a much wider variety of inputs compared the HomePod’s AirDrop-only connectivity, or the Google Home Max’s 3.5mm, Bluetooth, or Google Cast options.

Being an Echo device, the Echo Studio is powered by Alexa… and only Alexa. This isn’t all that different from how Apple’s HomePod runs with Siri or the Google Home Max uses Google Assistant — which makes sense given they’re all first-party devices — but many third-party speakers support two or more. It’s an understandable limitation, but a limitation nonetheless.

Should you buy an Echo Studio?

For Amazon users who want an Amazon-branded smart speaker for listening to Amazon Music HD, the Echo Studio is the best Echo device for the job. Conversely, if you’re enmeshed in either Apple or Google’s ecosystems, then there’s little point in investing in an Alexa-only device like the Echo Studio.

Finally, we have those folks who either have yet to pick which smart home platform to go with, or who use a plurality of devices from multiple brands. I would suggest multi-platform users check out some of the options from brands like Sonos or Paradigm first, but keep the Echo Studio in mind; its $329 price tag makes it not only one of the more affordable high-end smart speakers currently out there, but it also will nab you some cool extra features that we haven’t seen available from most other brands just yet.