Organise Your Trading Card Game Collections With These Apps

collectible card gamesiosMagic: The Gatheringtcgtrading cards
To sign up for our daily newsletter covering the latest news, hacks and reviews, head HERE. For a running feed of all our stories, follow us on Twitter HERE. Or you can bookmark the Lifehacker Australia homepage to visit whenever you need a fix.

Trading and collectible card games (TCGs and CCGs, for short) can be a lot of work, especially as you start to accumulate boxes and boxes of physical cards.

Whether you’re a competitive Pokemon TCG player looking to test out new deck builds, an avid Yu-Gi-Oh! collector looking for rare deals, or you recently found yourself staring down teetering stacks of long-forgotten of Magic: The Gathering cards while KonMari-ing your belongings (like me), there are a number of apps you can use to catalogue, evaluate, and off-load parts (or all) of your collection.

Before we begin, one quick note: All the apps listed below are designed for managing your physical card collection — they let you scan cards to create digital catalogues; translate imported cards from other regions; look up the latest rules for your game; or buy, sell, and trade cards within an app.

These apps are not for uploading your physical collection into online versions of these games, such as M:TG Arena, Magic Online, Pokemon TCG Online, or unofficial digital facsimiles. 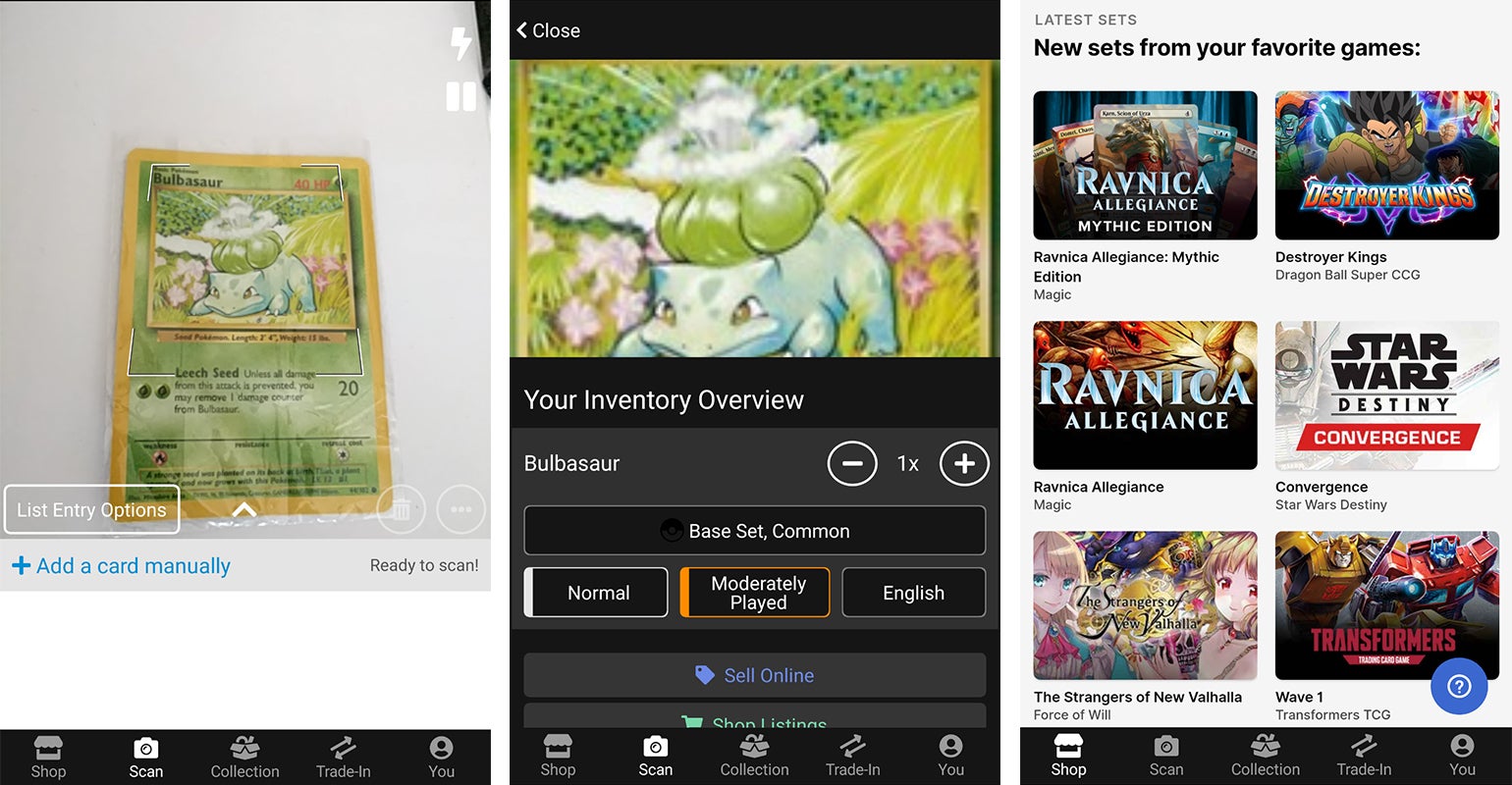 The TCGplayer app is primarily for buying, selling, and/or trading cards in your collection. The app supports Magic: The Gathering, Pokemon TCG, and Yu-Gi-Oh!, though Final Fantasy TCG, Force of Will, and Star Wars: Destiny are expected to be added in future updates.

TCGplayer’s features are pretty standard. The app allows you to scan multiple cards at a time, even if they’re in sleeves or binder sheets, and can automatically translate imported cards. The real draw of TCGplayer, however, is the app’s marketplace functionality.

When you scan a card, you can select its condition quality, edition, and set to get an accurate estimate of its value. TCGplayer (the website) is a huge card marketplace, so when you scan in your cards with the app, you can immediately see their current market value.

You can then sell and buy cards with other users directly via the app, and Magic: The Gathering collectors can even shop out their cards to nearby game stores (rather than individual buyers) using TCGplayer’s trade-in feature.

You can also organise your scanned cards into sets, which you can export in various file formats. This can be useful when you’re posting trades online elsewhere, tabulating a collection, or selling cards at brick-and-mortar shops.

You can download TCGplayer for free on both Android and iOS.

Strangely, many Pokemon TCG-specific apps have idiosyncrasies that keep them from being an all-in-one solution for collectors. Some only recognise English cards, while others have crappy collection and organisation features. The Pokemon Company seems to have noticed this, and will soon release a free card-scanning and collection-organising app of its own: The Pokemon TCG Card Dex.

With the Pokemon TCG Card Dex, users can scan in their cards, create decks, and search for cards from a database that contains all available cards since the Sun & Moon Pokemon TCG series. The app will also automatically translate a scanned card into your preferred language, which is helpful for those who play in international tournaments or events that allow for imported cards — a feature 10-year-old me in the height of Pokemon fandom is deeply envious of.

On top of these features, Pokemon TCG Card Dex is also the best-looking app of its kind thanks to its smart, animated UI, which you can see in the in-app demo footage above.

The one bummer of the app is that it currently only supports cards as far back as the Sun & Moon series. While this makes sense, considering that official “Standard format” Pokemon TCG events only permit using cards from the Sun & Moon series (and not the twelve series and numerous expansions preceding it), it’s a shame that the app currently doesn’t allow you to scan in even older cards. There is no official word on if or when older sets will be supported as of when we published this article.

Still, curious fans should give the app a shot. The Pokemon TCG Card Dex will be available for free on iOS and Android. (The app officially launched in Sweden, but a full global rollout is expected soon.)

Tracking your Magic: The Gathering collection with Delver Lens 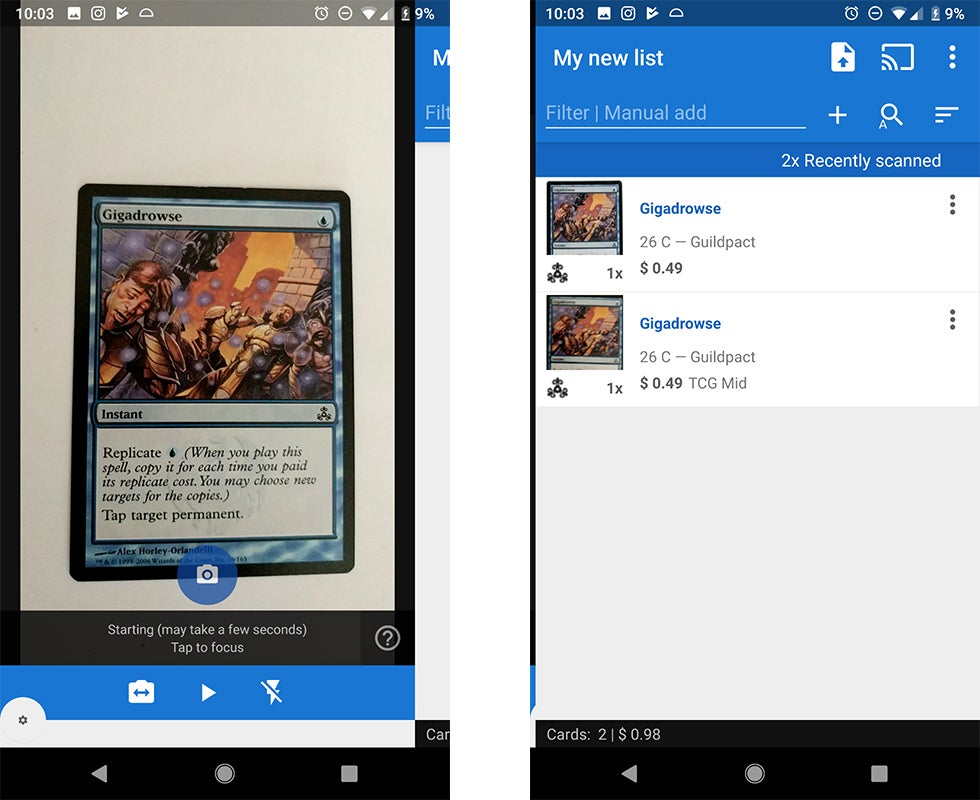 There are plenty of third-party apps for Magic: The Gathering, but Delver Lens is one of the few zero-cost Android options that lets you scan, organise, build decks, and buy/sell/trade within a single app.

Delver Lens’ scanning tool recognises all cards from the original card set up to and including the Ravnica Allegiance expansion that launched on January 25, 2019, even if you’re scanning your collection offline.

By scanning your cards using your phone’s camera, you can save a digital version of your collection that you can then use to build decks directly on your smartphone or tablet. You can also automatically backup your collection to Dropbox via the app, in addition to exporting your card sets to a number of other databases and online deck-building tools, such as:

In addition to its flexible cataloging and deck brewing capabilities, Delver Lens also helps you buy new cards or sell/trade those you already own. You can check the current market value for your cards from TCGplayer.com and MagicCardMarket.com listings, all of which can be converted into different currencies. You can also use Delver Lens to buy or sell M:TG cards directly through Card Kingdom.

Delver Lens is free to download and use for Android, but in order to export sets larger than 99 cards at a time, you’ll need to subscribe to the premium version of the app — either $4 per month or $47 per year. 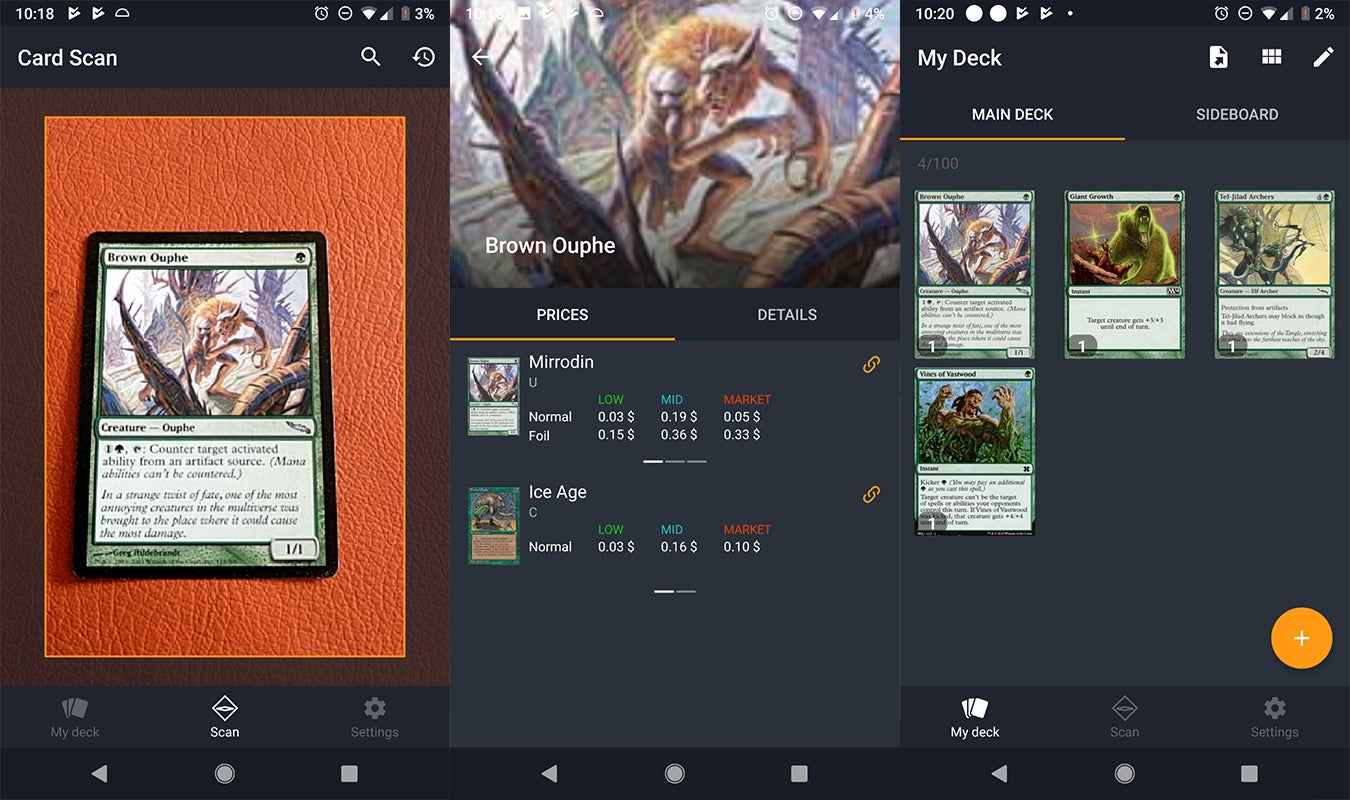 BigAR offers numerous game-specific card scanning apps that can be used as a snappy reference/translation tools, and will even aid in pricing out your card collection for just about every major TCG/CCG out there:

BigAR draws from a database that allows you to scan and translate cards even when you’re offline. These scanners can also automatically scrape a card’s market value (when available) from TCGplayer.com, MtgMintCard.com, or CardKingdom.com and convert it into your currency of choice, though in-app buying, selling, and trading functions are not included. While these features aren’t as robust as TCGplayer’s app, or others, they’re still handy for niche games that don’t otherwise have apps like this.

In addition to those features, the M:TG, Pokemon, and Yu-Gi-Oh! manager apps also include deck-building and collection features, with some caveats. The base version of the manager apps only support a limited number of “slots” to save scanned cards, and you must buy access to the latest expansion packs in order to save cards from them.

Thankfully, it’s a pretty reasonable price — about $4 to unlock the newest sets and add an additional 100 card slots — but it’s still restrictive compared to similar apps. On the plus side, BigAR is developing web versions for these apps that will enable cross-platform syncing.