The new Netflix series Tidying Up with Marie Kondo is a reality-show version of tidying guru’s best-selling book. Something as innocuous as reducing clutter finds itself at the center of a backlash from booklovers.

As our colleagues at Jezebel pointed out in 2015, the backlash against Marie Kondo and decluttering is not new. Years later, the hate remains rather bizarre. She’s not telling anyone what to do, but merely providing a systematic way of decluttering.

The Netflix show has brought the animus roaring back, this time among book lovers. Earlier this month, novelist Anakana Schofield’s tweet regarding Kondo went viral.

Do NOT listen to Marie Kondo or Konmari in relation to books. Fill your apartment & world with them. I don’t give a shite if you throw out your knickers and Tupperware but the woman is very misguided about BOOKS. Every human needs a v extensive library not clean, boring shelves

In the program (and her book), Kondo asks people to go through their stuff and keep what sparks joy. That’s for each person to decide, not Marie Kondo. The show is sweet-natured and upbeat as is its host. Yet the image below has been circulating on Twitter, with Kondo being called a “monster.” 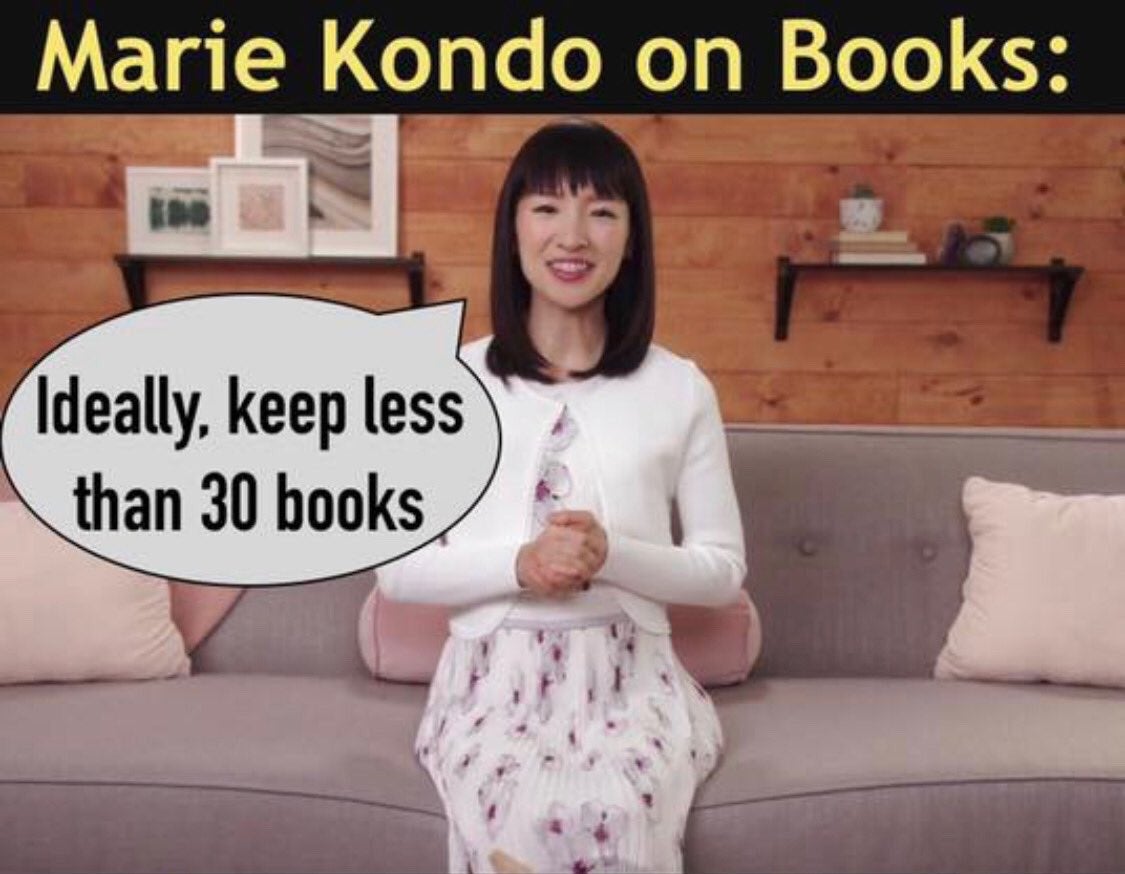 I don’t know if the person who initially made the “monster” remark was doing it in jest, but it’s a misrepresentation.

But like, this. I’ve heard at this point several people say “Marie Kondo thinks you should only have thirty books” and it’s baffling to me. But what she actually says is: “I now keep my collection of books to thirty volumes.” pic.twitter.com/iNCECUcl4f

Some English-language commentary on Kondo misses obvious cultural nuances. For example, in The Guardian, the aforementioned Schofield writes:

Kondo helps a woman declutter her books by ‘waking them up’. Surely the way to wake up any book is to open it up and read it aloud, not tap it with fairy finger motions – but this is the woo-woo, nonsense territory we are in.

Less “woo-woo nonsense” and more Japanese-style animism that comes out of the country’s indigenous Shinto beliefs. This is why Kondo asks people to thank each item before discarding. In Japan, objects can have souls (which is why I once had a Shinto priest bless my phone!) In my experience, it is not uncommon for people to thank a discarded object after being used for many years. So much of Kondo—and Japan—can be filtered through animism.

This doesn’t mean Kondo and her method are beyond reproach. Kondo has said she tried tearing out parts of books to see if that helped her declutter. It didn’t, so she doesn’t recommend it. Honestly, I do shudder at the notion of ripping parts out of books! The idea of pairing down one’s library isn’t intrinsically Japanese, either. There’s even a word for buying books and not reading them (積ん読 or tsundoku, literally meaning “reading pile”). Also, the country is filled with people who collect old books! If you are ever in Tokyo, visit Jinbocho, which is filled with old bookshops.

Kondo keeps about thirty books. That’s her ideal number. It’s not mine. I have hundreds and hundreds of books. They all spark joy and are stacked neatly in shelves. The ones that are not are stacked neatly on the floor. I don’t plan on weeding them out, because they bring me great happiness, which by Kondo’s standards is the question one should ask.

I am trying to Marie Kondo my clothes and so forth. But about the books: pic.twitter.com/qu169fYmHV

Does something spark joy? If so, keep it. She’s helping people ask the question, but it’s us who does the answering.

Marie Kondo: (minus her suggestion to keep select pieces of books, I disagree there) I personally keep around 30 books. If you’d like to de-clutter your home library a bit, you could donate some books. But hey, if they make you happy, keep them!

Bibliophiles of the internet: pic.twitter.com/23uTg4XqiY

WHAT MARIE KONDO SAYS: Think about getting rid of books you aren't going to read or reread.

WHAT TWITTER HEARS: Let's burn all books and slay the writers! Let the streets run red with their blood as our literary pyre's smoke blocks out the sun! FUCK BOOKS.

I cant believe Marie Kondo said to destroy all books and then broke into peoples’ houses individually and made them eat all their books and then when they tried to protest she said “don’t talk with your mouth full of books, bookmouth” and all the cool kids laughed at them.

this is silly because

Kondo: Maybe you should give away some of these clothes you don't wear

Kondo: Maybe you should give away some of these books you'll never read

Viewer: This is literally Fahrenheit 451

Last thing I'm saying on the Marie Kondo demonizing: some of you guys are saying, "She encourages landfills by telling you to toss things out."

Have you heard of THRIFT STORES? Other people have. Thrift stores are reporting a leap in business thanks to Marie's Netflix show.

Y'all deify Mister Rogers and Bob Ross for their kind, thoughtful natures and Marie Kondo comes and gently helps people release physical and mental clutter and make their spaces peaceful and she's a monster who wants to take away your books.

I'm honestly so upset about all this Marie Kondo discourse, like seriously if you love your shit keep it she's not coming into your home the book is only literally for people who want to tidy their lives.