Marie Kondo has built an empire around her “life-changing” method of tidying up, inspiring millions to quit the cruelty of rolling socks into balls and start the practice of thanking inanimate household objects that spark joy. She’s now reaching a new audience: Graphic novel fans. This article was originally posted 20 September 2017.

Kondo has turned her signature decluttering guide into a manga comic, The Life-Changing Manga of Tidying Up, which follows a fictional 20-something sales rep named Chiaki, whose life is a figurative and literal mess.

In the story, illustrated by artist Yuko Uramoto, a cartoon Marie Kondo swopps into Chiaki’s disaster of an apartment and saves the day, teaching her the tenets of KonMari method. (“Clothes that look like they would enjoy fluttering in the breeze, or that look too tailored to bend should be hung on a hanger,” cartoon Kondo explains.)

You know who’s loving this book? The parents of teenagers. The Associated Press’ Katherine Roth writes that something magical happened after her two boys read the manga. They tidied up.

While my two sons, ages 12 and 14, had zero interest in her earlier books, they battled over who could rip through Kondo’s manga as soon as they spotted it on the dining room table. And while they rolled their eyes when I asked if it had made a difference in their lives, my younger son was soon putting his desk in order and going through his drawers, and my older son packed for a family trip by carefully rolling his clothes into neat little packets in his suitcase. He also commented on a recently acquired cabinet in our living room, noting Kondo’s advice that additional storage furniture should be unnecessary in a properly decluttered home.

Then my boys passed the book on to a friend, who also rolled his eyes and shrugged when asked if he’d learned anything from it. But within days, he’d packed up no less than seven bags of unwanted toys and clothes from his room.

How to fold dresses and skirts, the Kondo way: 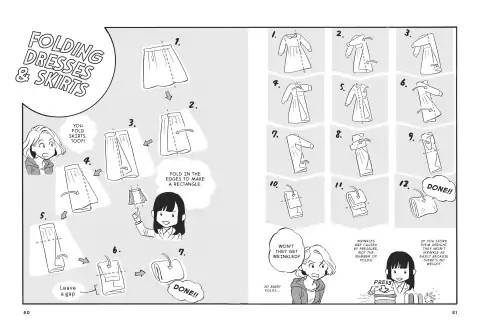 Amazon reviewers are sharing similar stories about the book, which is a breezy read, yet fully covers the depths and intricacies of the method – how we accumulate heaps of items “just because”, how we hang onto way too many “someday” books, how three files for paperwork are all we really need.

One parent announced that her 10-year-old daughter has “joined in with ‘Kondo-ing’ our household”. Wrote another reviewer, “My tween & teen kids love this book. After reading, my daughter had four large bags for the thrift store.” And another: “I bought this for my teenagers. The manga format made it less of a ‘chore’ to read. I even caught them laughing. The pictures help one to visualise her concepts. So when I tell the kids its time to fold and put away laundry, they know exactly what to do!”

Maybe Kondo is the superhero we have been waiting for.