Huawei’s MateBook X Pro Is An Imitation Worth Buying

As it has with its recent phones, the Chinese electronics giant has emulated some aspects of other companies’ devices incredibly closely here, but that’s not to say it’s a cheap knock-off by any stretch. The body nails the sleek look and feel of MacBook, right down to the contrasting keys and the little cutout that lets you gracefully lift the lid with one finger. Slap a sticker over the Huawei logo on the back and at a glance anyone might mistake it for an Apple machine.

It stands out from the MacBook in the details though, and I actually prefer Huawei’s classy chamfered edges to Apple’s boxier approach. Huawei includes two USB-C ports, and even packs a dock in the box so you can connect to a monitor using HDMI or VGA, but you’ll need a dock of your own if you want DisplayPort or an SD Card reader. Handily the MateBook features one regular USB A as well, and the power button doubles as a fingerprint scanner for super snappy Windows Hello logons.

The display is a bright, beautiful 3:2 aspect touchscreen, just like you might find on a Microsoft Surface device, but the MateBook’s tiny bezels let it pack a 14-inch screen into a chassis that will easily fit in bags designed for 13-inch laptops. At around 1.3kg, the MateBook matches the MacBook Air in terms of its ability to be carried around between meetings.

One major downside of such skinny bezels is that Huawei had to get creative with the placement of a webcam. Smack in the middle of the top row of keys, between F6 and F7, is what looks like a regular key but is actually a spring-loaded pop-up camera. It’s clever, but as with the low camera on the Dell XPS 13 it means people you talk to over Skype or video conferencing will always be looking straight up your nose, and an added issue here is that if you type while you talk they’ll see your hands looming over them and obscuring your face. 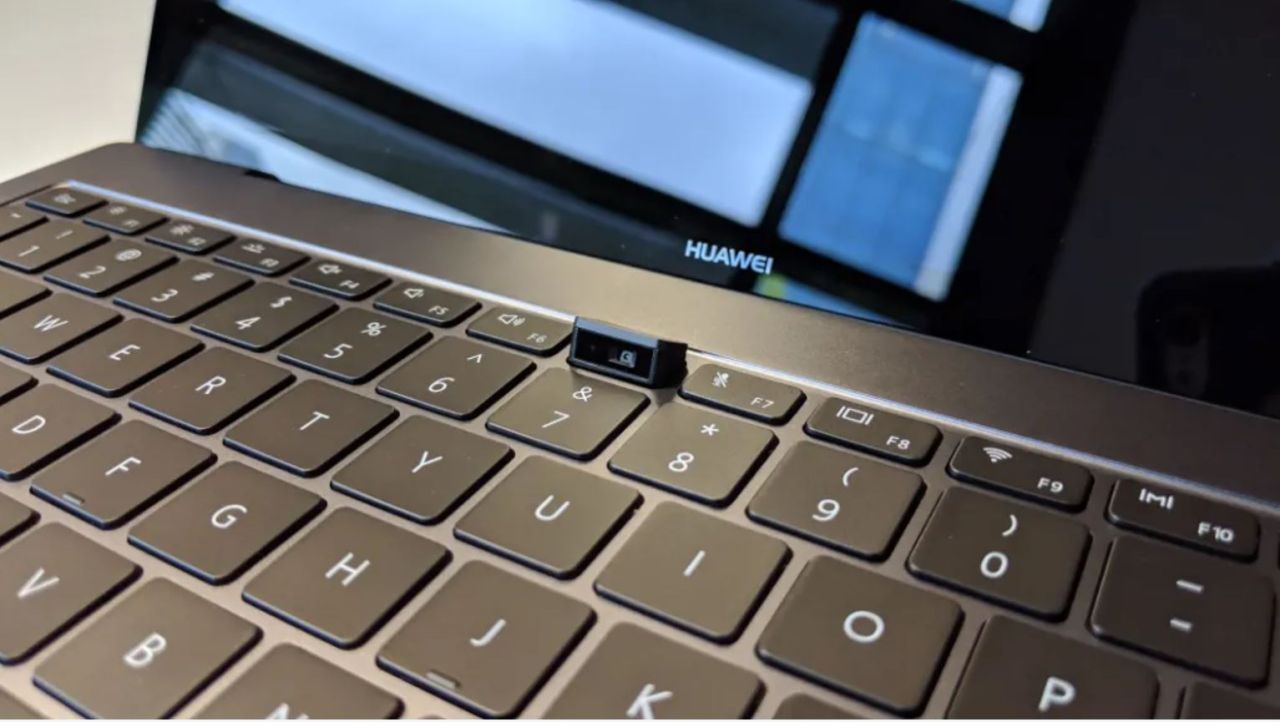 But in a design sense this is the MateBook’s only stumble. It feels as good as it looks thanks to a massive and responsive touchpad and comfortable keys that give those on Apple’s thinner laptops a run for their money. The MateBook also boasts some serious battery life, as I was able to push it to last a full workday without a charge.

Huawei has provided a clean and uncluttered version of Windows 10, with the only addition being its “PC Manager” software. This is important enough to Huawei that it has its own key on the keyboard to launch it, but unless you have a Huawei phone and would benefit from the file-sending functionality it’s unclear what the benefit is. It also requires you to allow Huawei to collect data including the serial number from the machine, and the process always runs in the background even after you’ve quit the application, which you probably won’t like if you’re prone to paranoia.

Huawei’s more powerful MateBook model steps up to an i7, 16GB of RAM, 526GB storage and dedicated GeForce MX150 graphics. This puts it almost in league with the Surface Book 2 and MacBook Pro 15, which each cost around $1000 more than the MateBook’s $2599, but of course Microsoft and Apple ‘s machines offer a detachable screen and Touch Bar respectively, as well as more powerful CPU and graphics.

The most obvious target market for the MateBook X Pro is someone who wants a Windows ultrabook but prefers Apple’s MacBook aesthetic, but with beautiful hardware and workhorse performance Huawei’s machine is very strong competition for the lightweight machines from Microsoft and Dell as well.