After Legalise Cannabis Australia’s Results in the Election, How Can Reform...

7 Gin Cocktail Recipes That Are Equal Parts Simple and Delicious

These Australian Winter Travel Spots Are Worth Braving the Cold For

It’s that time again! At 7pm tonight the floodgates will open and Australians will have access to a whole bunch of deals: including the ridiculous 99% off flash sales. We’ll be taking you through the first of these sales tonight, and we welcome you to come share your tips, tricks and triumphs (or failures, which there will likely be many of).

As with last sale, we expect the first emails to go out somewhere between 6 and 7pm AEDT. Subscribers will also be given a 30 minute headstart on the main (non-flash sale) deals, so look out for details for that around 6:30.

For now, make sure you’re ready for the sales to come. Check out our guide to getting the most out of Click Frenzy here and check those steps off your list:

Read more
” excerpt=”Click Frenzy is back for another wild day of ridiculous deals, and as always we’re here to help you nail the best of them. If you’re keen to pick up an LG Soundbar for $3 or a pair of Beats Headphones for $4, read on to find out how to score the top deals.”]

Also check out the list of Click Frenzy sales already in progress, and the list of flash deals we can look forward to over the next 24 hours or so:

Here Are All Of Click Frenzy's Huge '99% Off' Flash Deals

Click Frenzy gives Aussies discounts on a range of products across the internet, but even more exciting for intense deal-hunters are the limited flash sales, where you can get ridiculous deals like a $4 GoPro or a $5 Dyson hairdryer. Here are all the flash deals you can look out for when Click Frenzy starts at 7pm AEDT.

Read more
” excerpt=”Click Frenzy officially starts today at 7pm, but as usual the sales are starting early – both official and unofficial ones. Jump in here to check out everything Click Frenzy that can be bought for cheap now, and get a head start on deal planning for tonight!”]

Check back here soon: We’ll be updating as we get new emails and information in. In the meantime, sound off in the comments if you’re in for this wild ride.

[6:47pm]: Hoo boy, I took a break to update our big deal round up and since then everything has gone to hell, as can be expected. The Click Frenzy site is dealing with continuous outages, and many frustrated users are having a time trying to get onto it.

What’s more, accounts are claiming that the Go Wild $2 GHD has already been released, though there isn’t too much information on whether that means the email or the actual product itself.

Personally I haven’t had any Click Frenzy emails through since yesterday, though hopefully something will come through before 7pm. If you have an email, tell us in the comments!

In the meantime, subscribers who are logged in can already access the sales, though many of them have already been going throughout the day. Still, there should be some good stuff hidden in there.

[6:54pm]: On the upside, this is a great opportunity to make some fantastically relevant commentary about the state of Australian internet. Wouldn’t it be nice to have reliable superfast broadband?

it sure would be nice if australia had some kind of robust modern national broadband network, or NBN if you will, so things like #clickfrenzy and the #census weren't such a shame job

Click Frenzy started today at 7pm AEDT, but most Aussies couldn't get onto the site even at 6:30pm, half an hour before the sale was meant to open. Now, while everything should be in full swing, frustrated users are reporting widespread 503 errors and problems with logins. Here's what you need to know.

[7:08pm]: Still no emails through here, though the site seems to have stabilised for me now. I’m seeing the bell-shaped notification icon in the top right corner that’ll supposedly be my ticket to Go Wild flash deals, so hopefully those come through for me.

Twitter is exploding with users complaining about the unreliable site, however. If you’re wanting to shop for regular deals and can’t get online, check out our round up of the best of the bunch!

Some Twitter users appear to have got through to the first step of the flash deals, and were asked some kind of question about fruit, though the exact mechanism is still unclear:

#clickfrenzy trying to put the password in for the GHD and it's telling me I don't know my fruits ????

[7:33pm]: A little more info on those flash deals. Looks like the notification will give you a question/clue that you have to answer by typing a word or phrase into the Click Frenzy store portal as a password. The first question asked “What fruit is on Arrowmasters’ deal image advertising the Anolon Endurance 2 piece cook set?”

What fruit is on Arrowmasters' deal image advertising the Anolon Endurance 2 piece cook set? Answer in LOWER CASE and NO SPACES

The image in question is of cherry tomatoes, but people are trying all sorts of combinations and being told they’re incorrect. Perhaps only the first few correct answers are accepted before the portal closes off? If anyone has successfully logged into the store, let us know in the comments!

[7:50pm]: Okay some emails from Click Frenzy have clarified on the whole flash deal issue. A spokesperson on the Twitter account has told people to keep an eye on their emails and notifications, so hopefully we will still get an email indicating the general timings of the flash sales:

These deals will be released over a 24 hour period. Keep a look out in your emails and on the site!
– Fred

And even better news, as of a few moments ago, they clarified that no Go Wild deals have been released yet. This means all of the big deals are still up for grabs (though it would be nice to have some idea of when they might appear).

No GoWild deals have been released as of yet, look out for the first one later this evening! Reminder to keep push notifications turned ON. Good luck 🙂

[8:05pm]: Okay, the general advice from Click Frenzy seems to be ‘hold tight’ for now, so I’m going to finish up here for the moment and head in. The above question with the tomatoes seems to have been just a test of the system, so we can expect it to function that way once the real deals are released.

We’ll check in again once (or if) we get an email indicating any sort of flash sale timing!

[9:44pm]: Time to get back on this pony. The long-anticipated email finally arrived around 8:30pm for most people. The Apple Watch was indicated for sale between 8:30pm and 9:30pm, while the Bunnings gift card is due between 10pm and 11pm.

Now that the Apple Watch is out, we have a bit more of an idea of how the sale will work. The notification arrived around quarter past 9 with the following clue: 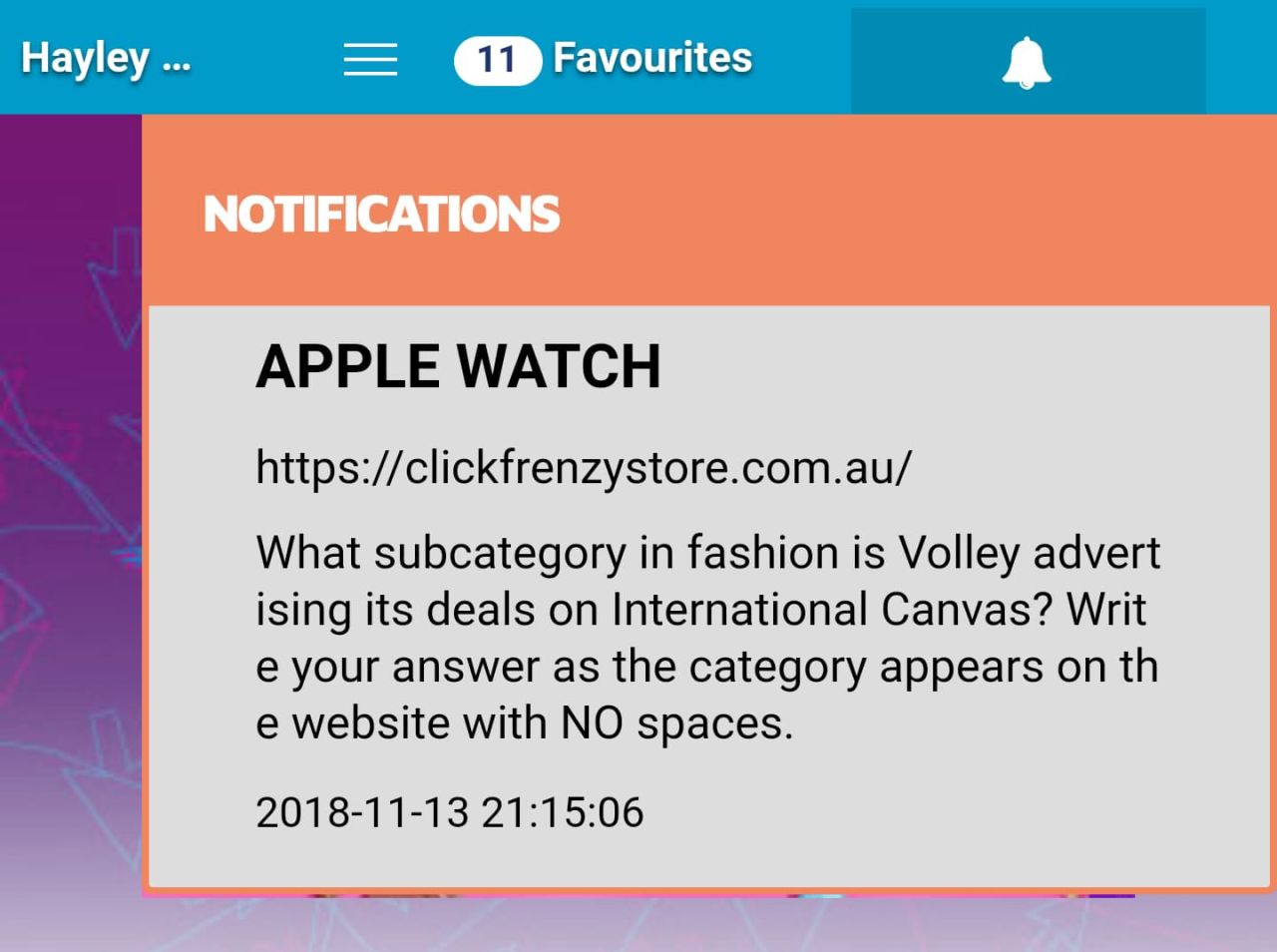 The answer was ‘youth&streetwear’, though users who put the password in too late seem to have been told that the password was incorrect: so if you put in a password you’re sure is the right one and it’s not accepted, it probably means the item is out of stock.

All the ‘trivia’ seems to be about the Click Frenzy site, so for other Go Wild deals you’re aiming for it’ll be a good idea to keep two instances of the site open for quick searching. The Apple Watch appeared to sell out in around 2 minutes.

It’s also worth noting that just because you have something in your cart, it doesn’t mean you have it. Check out as quick as possible to make sure you don’t lose your item – turn Autofill on now!

[10:01pm]: The Bunnings Gift Card period starts now, so set up those browsers and be ready to search for a password. Who out there is staying up to aim for Bunnings tonight?

Click Frenzy claims a second deal will be releasing during this period, though I haven’t got a second email and can’t find the details. Will update here if I manage to search it down!

As well as the Bunnings Gift Card, you’ll be able to grab the Dyson Hairdryer sometime between 10 and 11pm tonight.

The first two deals for tomorrow have also been announced: between 6am and 7am you’ll get the Garmin Dash Cam and the Echo Dot between 6:30 and 7:30am.

With that info out on the table, that’s me done for the night. Good night and happy deal hunting!