I'm Pop-Up Magazine Editor Douglas McGray, And This Is How I Work 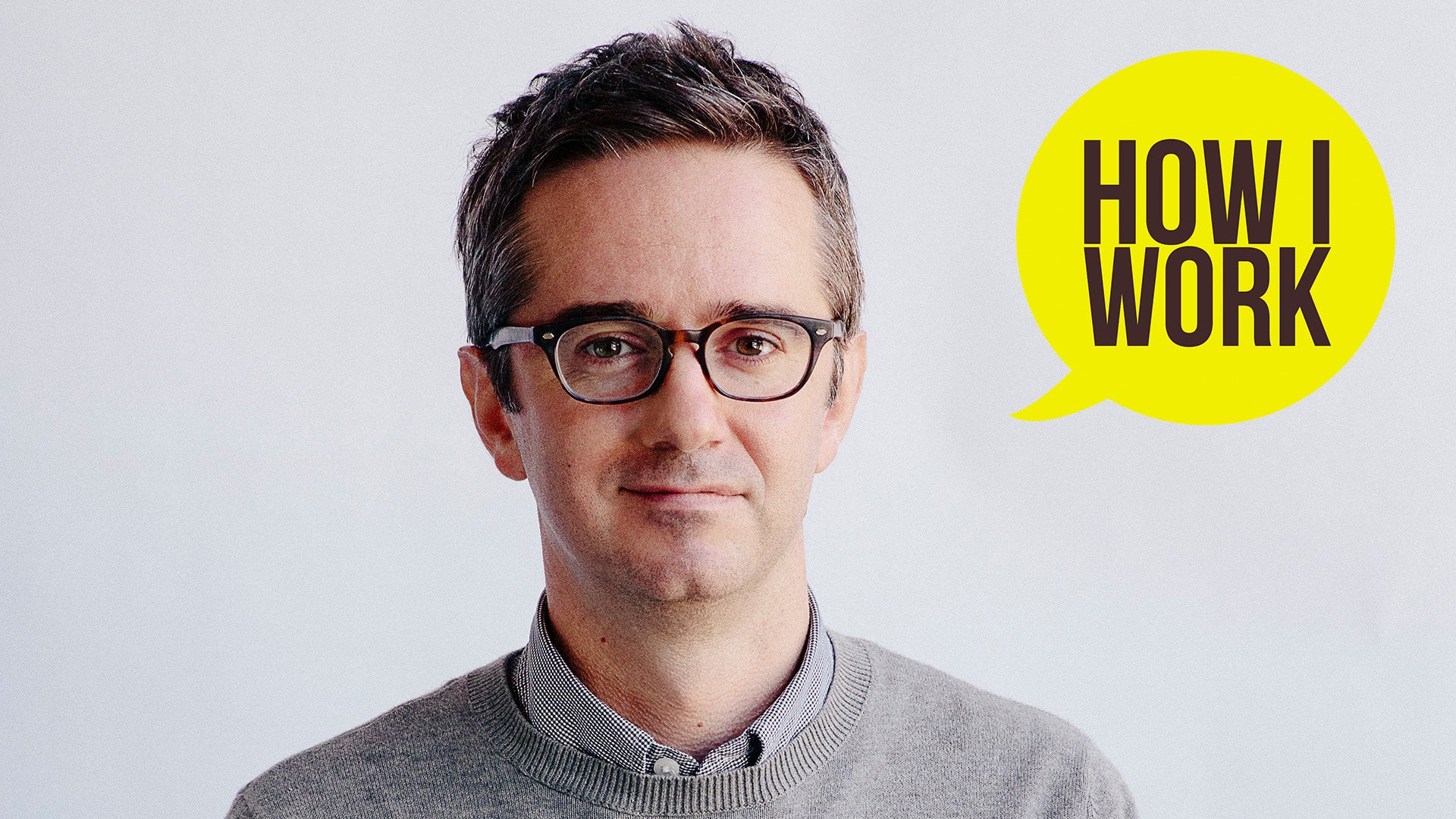 Douglas McGray's first magazine doesn't look like a magazine. Pop-Up Magazine, currently on tour, is a live variety show that uses different techniques to tell a story onstage. McGray also runs the California Sunday Magazine (which does look like a magazine), a weekly magazine about California, the American West, Asia and Latin America. We talked to him how he organises a live show, his philosophy on cross-disciplinary collaboration, and his favourite shortcut - a literal one.

One word that best describes how you work: Experimental

I was a writer, mostly long features for magazines. Then I did some work with This American Life and I fell in love with radio. But it struck me that radio seemed like its own world. I knew millions of writers, and I hardly knew any of these radio producers. I realised I didn't know many filmmakers or photographers either.

Eventually I started thinking about how these communities gather. Writers have their readings, photographers have their gallery shows, filmmakers have their screenings and festivals. I longed for more creative mixing.

So I got together with some friends, and we created this idea of a live magazine. Writers, radio and podcast producers, photographers, and filmmakers would perform new stories about the world around us - science, pop culture, politics, food, music, war, art, comedy and more - in all different kinds of media mixed together. We called it Pop-Up Magazine. It was a side project at first, but the idea took off. 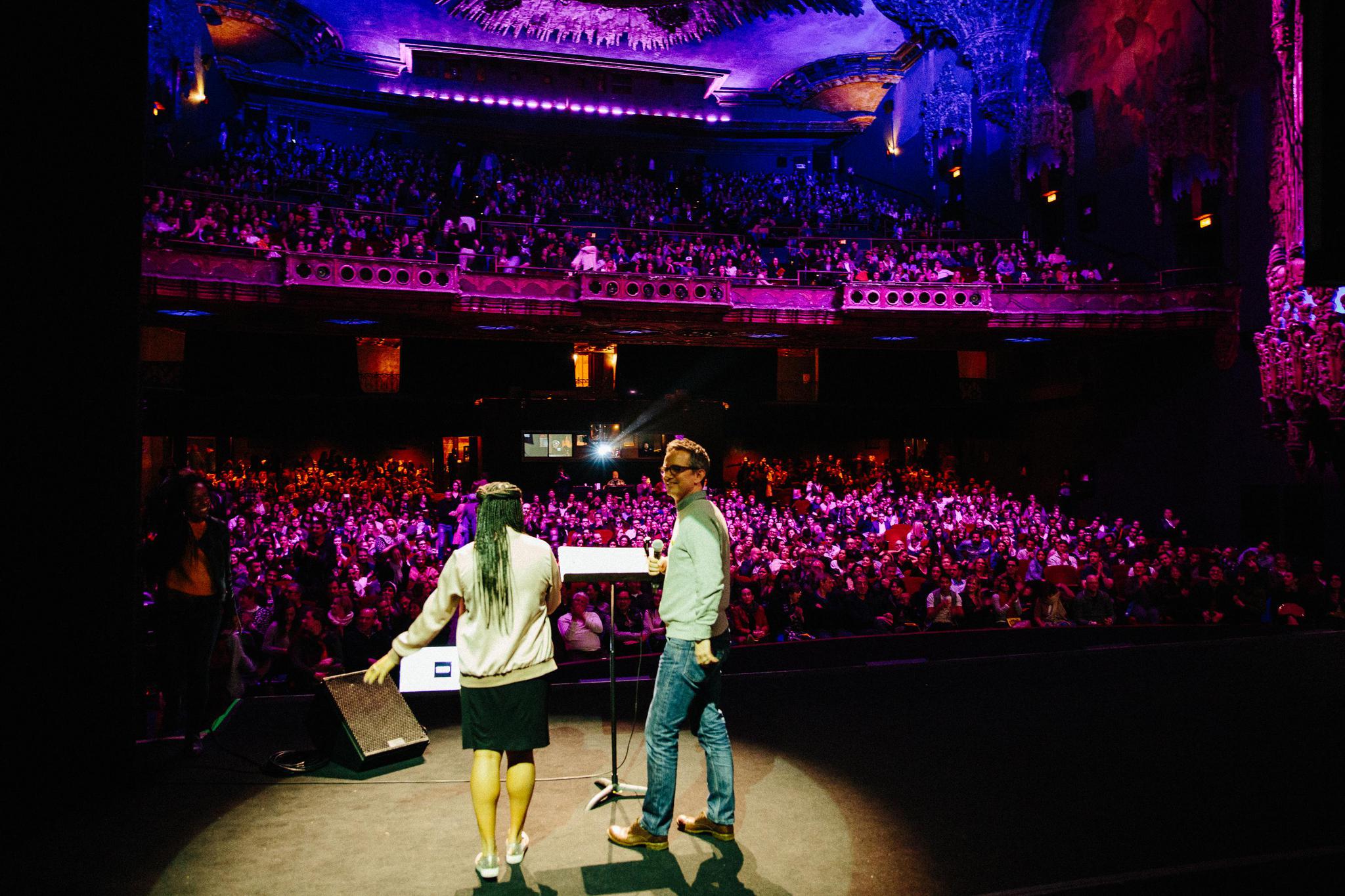 In 2014 we became a company, Pop-Up Magazine Productions. Now we bring our live shows across the US, to venues like Lincoln Center and BAM Howard Gilman Opera House in New York, the symphony hall in San Francisco, and the Theatre at Ace Hotel in Los Angeles.

Our shows have become more and more theatrical. We art-direct stories with original photography, film, animation and illustration. Our house band Magik*Magik Orchestra live scores them with original music.

We've teamed a New York Times journalist up with a shadow theatre company that animated her story about technology and memory with live shadows, invited thousands of people to taste something at once for a story about spices and global conflict, and produced a live collaboration between a dancer and a documentary filmmaker.

We've turned a restaurant into a magazine, collaborated on a live music and storytelling show with Beck, and produced stories meant to be heard as voicemail. (Got tickets yet for one of our shows? You should get tickets!)

We also created a weekend magazine, The California Sunday Magazine, which covers California, the West, Asia and Latin America for a national audience, with deeply reported features and cinematic photography. Our print edition is delivered six times a year with Sunday copies of the Los Angeles Times and the San Francisco Chronicle as well as by mail to subscribers.

California Sunday has gotten off to a pretty fast start. We've been a finalist for 10 National Magazine Awards since we launched at the end of 2014, including, this year, General Excellence, the top prize - we've won for Photography and Design - and the Society of Publication Designers recently named California Sunday the Magazine of the Year.

It has been a pretty wild evolution for something that started as a hobby.

Take us through the process of making an issue of Pop-Up Magazine and of The California Sunday Magazine.

Once story drafts come in, we work with our contributors to shape them and refine them. And our art department commissions photography or illustration, or in the case of Pop-Up Magazine, animation or film. If a story is bound for a live show, we share drafts with our music director, and she composes scores.

And then we assemble all the pieces, and publish a magazine or put a show onstage. Opening night of Pop-Up Magazine's tour was recently and we were shipping an issue of California Sunday, so it was a busy Monday. The day started early as usual with East Coast emails and Twitter. (Social media can be exhausting, but Twitter especially is a good way to spot talent and pick up on emerging stories and ideas before they're on the front page of the New York Times.) Then I walked my son to daycare and biked to the office.

I had a stack of things to read and mark up. A late draft of a funny Pop-Up Magazine script. A draft of a long foreign feature for California Sunday. A proof of California Sunday's new Shorts department - we're changing the section up pretty dramatically with this next issue, so this was my first chance to see how it was all coming together, stories and art and design.

I said a quick hello to a job candidate in for an interview (we're hiring, and we just posted some new openings), and then it was a series of walking meetings. First with California Sunday's executive editor - we talked through a couple ambitious photo assignments and our politics coverage. Then with our creative director. We went over some art and design for the tour and talked about a couple big projects we have planned for the next couple of seasons.

I paused for our Monday all-staff meeting - a 15-minute standing meeting. After that, it's a check in with Pop-Up Magazine's managing producer and executive producer of special projects. Then a quick huddle with my co-founder, our publisher, to talk about some television and film stuff. I'm squeezing in quick phone calls and emails when I can. Also, tacos.

Then another quick meeting to talk about Pop-Up Magazine's grassroots growth - partnerships with local media, arts organisations, entrepreneurial organisations, and our locally organised franchise pilot called Pop-Up Zine - and a handful of small events coming up: A design talk in San Francisco, a happy hour in Washington DC, a booth at an art fair. Then there's another feature draft to read.

Late afternoon I have to switch gears and think hard about one thing for an hour or two. We're planning California Sunday's next special issue - I can't tell you what it's going to be about yet, but we try and make our special issues special.

After that, I biked to a music rehearsal, to hear our music director and her band live score Pop-Up Magazine stories that would debut Thursday night. Then I biked home to be a dad. Once everyone else was asleep, I sent emails until late. What apps, gadgets or tools can't you live without?

It's an obvious answer, but Slack. We've been on it our whole life as a company, and it's hard for me to imagine how we'd get work done without it. And our Sonos speakers make the office more fun.

Our office is in a big industrial building in San Francisco. The space isn't fancy, but I like it - it feels like a place for making things. We sit four people to a table, and the tables are close together. Our creative director, California Sunday's executive editor, and Pop-Up Magazine's co-host and senior producer all sit about 1m away from me. I don't have enough personal space to make a mess, so I try and keep my desk pretty clear.

There's a 27" display for my laptop, a pair of headphones for listening to radio and film edits, airpods for phone calls and music, a metal cup filled with black pens (for writing) and orange pens (for editing), and a stack of California Sunday notecards and Pop-Up Magazine notecards for handwritten notes. I keep a bag with radio gear under my desk - a Marantz recorder and a shotgun mic.

What's the most overlooked factor in making a good live show?

I'd say it's imagination. You can produce a polished, professional show that feels similar to a lot of other things. It's not going to be all that memorable. We work really hard to surprise people. We perform stories that turn right when you think they're going to turn left. We're constantly trying things we've never tried before. We want our shows to be unforgettable.

I bike everywhere. Most of the time it's literally a shortcut. But also I get some of my best thinking done on my bike. A problem can stump me all afternoon and I'll solve it on a bike ride to a meeting. Plus, I live in California, so just about every day is a beautiful day to be biking around. 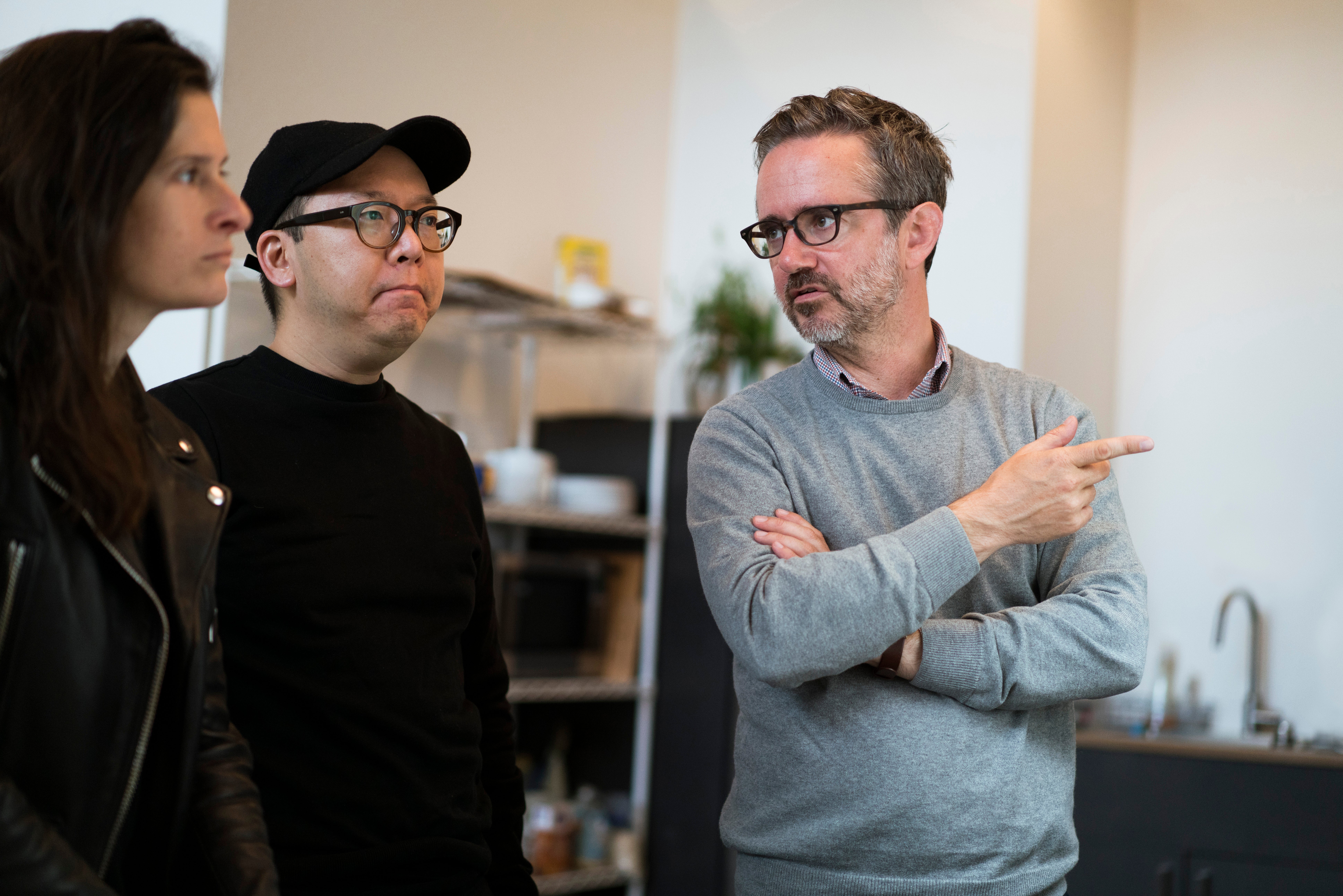 You know, if I'm doing my job well, it's the other way around. I'm helping other people get things done. I don't always succeed at this - sometimes I get stretched too thin and slow things down, or I micromanage - but I do my best and I'm getting better.

I try and give our brilliant creative director Leo Jung and photography director Jacqueline Bates lots of freedom to stretch and experiment. California Sunday's executive editor, Raha Naddaf, is a wonderful editor and leader. Pop-Up Magazine co-founders Derek Fagerstrom and Lauren Smith are so creative and entrepreneurial.

Our community producer Roseli Ilano helps us make new friends and find new collaborators across the US. California Sunday senior editor Kit Rachlis has edited some of our most ambitious features. Chas Edwards, who leads our business side, is exactly the business partner you hope for and need.

And there are so many others - I could go on and on. I feel very lucky to have the colleagues I have. 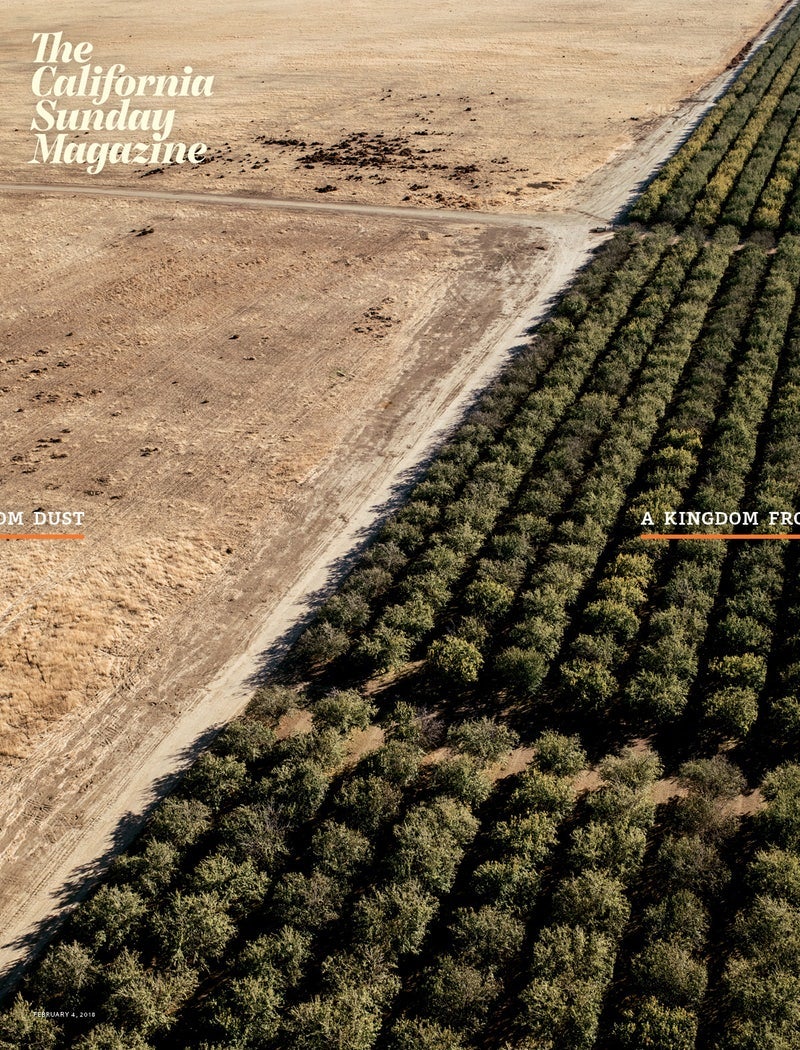 This has evolved as my job has evolved. I used to be a big believer in a simple handwritten to do list on a Post-it note. But my days have gotten faster and more complicated, so I've been trying some different tools.

What's your favourite side project?

This, all of this! My side project became my job.

The King Is Always Above the People by Daniel Alarcón.

I really can't say one thing. I've spent most of my career as a journalist. Your job is to learn from other people. I can't turn that off. I'm constantly learning from the people around me.

What's a problem you're still trying to solve?

What to do myself and what to hand off. I'm beginning to think you never truly solve this one.