Amazon Prime’s Aussie Launch Is More Aggressive Than Anyone Expected

After months or waiting and speculation, Amazon Prime is finally available in Australia. Intriguingly, it has the best lineup of launch features and services of any country - and it's much cheaper than the US version. We look at everything you get with the service and how much it will cost you.

In a conversation last December about Amazon’s launch in Australia, a cautious head of marketing for a major consumer electronics brand was keen to stress the importance of the launch price for Amazon Prime. The executive – whose products included a range of high end devices – was concerned that a low price for Prime had the potential to cheapen his own brand if he was to sell through the Amazon platform.

At the same time, a more affordable price would mean faster mass adoption and therefore make it a competitive distribution channel.

As it turns out, Amazon has chosen exactly this strategy in Australia with its $59 annual fee: an affordable offering that will probably lose a lot of money in the short term, but build a big subscriber base for Prime.

This leaves open the question of whether some brands will sell their products on the Amazon platform in Australia. But if Amazon is successful in building a subscriber base for Prime it may prove irresistible as the company continues to roll out its product suite. Pulling this off would mean it would start to eat into the revenues available to established players and start the process of retail sector destruction that many have worried about but seen few signs of yet. More on that in a moment.

How cheap is Prime in Australia? Cheaper than any other major market in the world. For comparison, it costs:

So the $59 price here – especially given the complex and costly realities of moving goods around Australia’s vast land mass – is much more aggressive than expected.

Australian retail sector analysts at Morgan Stanley said in a note to clients yesterday that the price point “shows Amazon’s high long-term aspirations for Australia”. The offering came earlier, cheaper and available across more territory than expected, they said.

Amazon has undoubtedly been slow getting to Australia and there was some unimpressed commentary in the early days, with the Guardian, for example, characterising it as “underwhelming”, and Business Insider noting the prices were unremarkable especially when you factored in delivery costs.

But it is now rolling out its platform at speed: in the past 12 months it has set up distribution centres in Melbourne and Sydney, has started pricing aggressively in some categories, and is now promising two-day delivery under its Prime service to 90% of the population.

Delivery with Prime is free. So Amazon has blown up at least one major concern on its pricing when it comes to the Australian market, and it’s a sign that they are prepared to invest heavily in securing market share.

They add: “Australian retailers tend to charge between A$5 and A$10 for delivery, which implies a number of purchases required to ‘payback’ the A$59 Prime is low at 6-12 annually.”

This is a critical point in the value equation for consumers. Amazon founder Jeff Bezos once famously said of Prime that their goal, “make no mistake, is to make sure that if you are not a Prime member, you are being irresponsible“.

In other markets, Prime drives huge amounts of retail purchases from customers on top of the billions of dollars in subscription revenue they stump up. It’s estimated to be used by around 90 million US households and, according to an RBC survey last year, half of those subscribers spend more than $US800 a year at Amazon and 74% shop with Amazon at least twice a month.

Among the huge swath of Americans that use Amazon, nearly half of them use the service at least two to three times a month. They spend a lot of money too. 33% of those surveyed by RBC said they spend more than $800 annually.

And remember, Prime is not just a delivery service. It also gives members access to content – some gaming benefits for Twitch players in Australia are included, as are some ebooks including the Harry Potter novels – and Amazon Prime Video, which includes some exclusive content.

For now, music and the free cloud storage that Prime members are given in other countries is not available but it is likely to be added over time, steadily broadening the value to consumers.

Australia’s retail sector is already under pressure and price deflation is going to continue to squeeze margins and threaten companies. As this chart shows, certain consumer goods have become moderately cheaper over time in the US but online the effect is magnified.

Amazon’s prices may have been pretty standard at the December launch, but as Business Insider reported in February, it rapidly cut costs without much in the way of publicity. Its electronics line was notably more expensive at launch than domestic competitors, but by February Amazon was undercutting them by 11%.

Adding to the problems for Australian retailers, consumer spending in Australia has been looking weak throughout this year, with official data showing the sector is repeatedly missing expectations for spending growth. And there is evidence that what little growth there is to be found is increasingly online, as this chart from Macquarie shows: 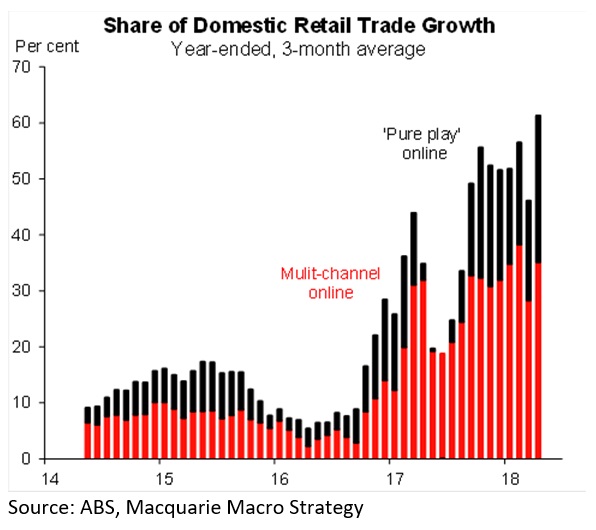 Another way of thinking about that: for every extra dollar Australian consumers are spending on retail, around one-third of it is going to pure-play digital stores. Amazon is positioned at the centre of a shift in shoppers’ behaviour that is gathering pace.

With Amazon’s Australian product range currently limited to around 4 million products compared to more than 100 million on the US store, the company appears to be willing to bet that its two-day delivery promise and limited range will be acceptable to prospective Prime customers, especially when it’s just $59 a year.

But it’s far too early – foolish, even – to conclude that Australia will be somehow immune from the Amazon effect.