Amazon made its presence felt in Australia last month with an aggressive launch of its Prime subscription delivery service. At just $59 per month – lower than any other global market – the price-point was highlighted by Morgan Stanley analysts as one of seven reasons why Amazon’s Prime service looks set to shake up the status quo in Australia’s retail industry.

After months or waiting and speculation, Amazon Prime is finally available in Australia. Intriguingly, it has the best lineup of launch features and services of any country - and it's much cheaper than the US version. We look at everything you get with the service and how much it will cost you.

The analysts said Amazon will still face some challenges, such as relatively limited range, a lack of fulfillment centres and the strong market share of existing competitors.

But they said Australia’s delivery network, population distribution and income demographics are all well-suited to Prime – factors which are likely to have leading retailers in Australia paying close attention.

Here’s a summary of why Prime poses a threat to the domestic retail landscape:

Morgan Stanley analysts used a practical test to compare delivery costs in Australia with other Amazon markets in the UK, US and Canada.

For each jurisdiction, they sent a 1 kilogram package (with similar dimensions) in a major capital city, with a two-day delivery time.

As it turns out, Australia Post is pretty competitive on price with global mail distributors — a factor which should help drive Amazon’s online penetration in the Australian market: 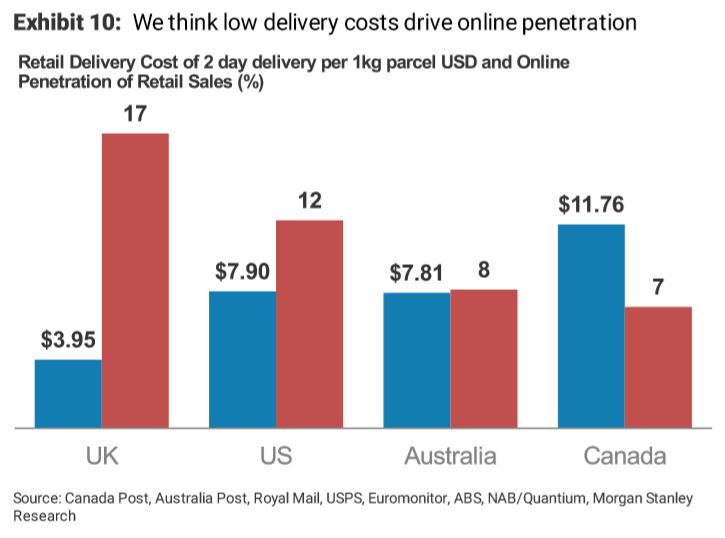 In addition, Morgan Stanley’s US internet team estimates that “Amazon’s delivery costs are 38-50% lower than industry averages, in part due to greater scale and negotiating power”.

The analysts highlighted an interesting dynamic in Australia’s delivery market — many competitors to Australia Post are foreign-owned.

Multi-nationals don’t have to disclose their profit results to the domestic market. That’s an advantage, Morgan Stanley said, because it allows them the freedom to operate at a loss for a period of time, in order to build market share.

“In doing so, we think these operators may be induced to offer Amazon very competitive rates knowing the success that it has had in other markets,” the analysts said.

The combined population of Australia’s three largest cities — Sydney, Melbourne and Brisbane — accounts for around 39% of the total population. 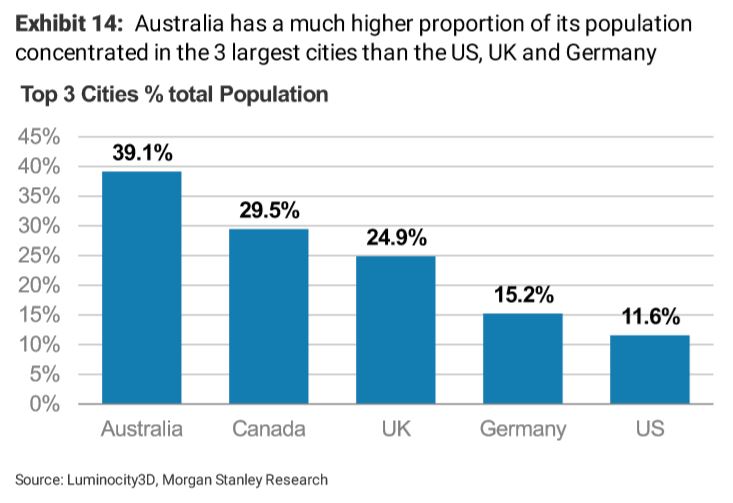 So just by servicing three cities with same or next-day delivery, Amazon could reach almost two-fifths of the Australian market.

Conversely, Australia’s low overall population means there are only 9.2 million people to serve in our three largest cities, compared to 37.3 million in the US.

Amazon’s $59 annual fee for the Prime service in Australia makes its domestic offering the cheapest of any market, on a comparative USD basis: 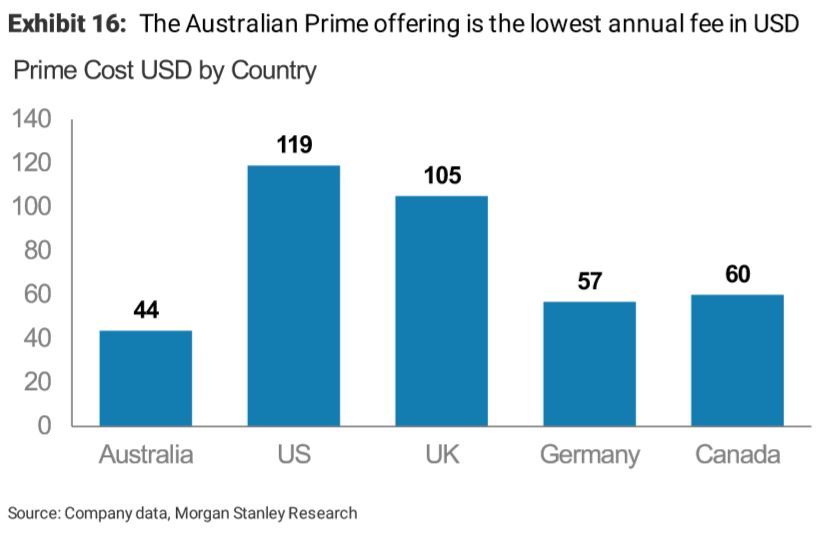 To the analysts, the low fee is “likely designed by Amazon to drive early adoption”. And it’s also evidence that Amazon is “playing the long game” in the Australian market.

They crunched some numbers on parcel delivery costs, and determined that an Amazon Prime member in Australia would only have to make around seven orders to recoup their annual subscription fee.

That makes Australia an attractive market for two reasons:

1. Relatively high wealth per capita; and 2. A flat income distribution, which means a higher percentage of workers in the middle-income bracket.

The middle 60% of Australian workers account for more than 50% of total income — more than the US and the UK. Australia also has higher income per capita that the UK and Canada, and is on a similar level to Germany. 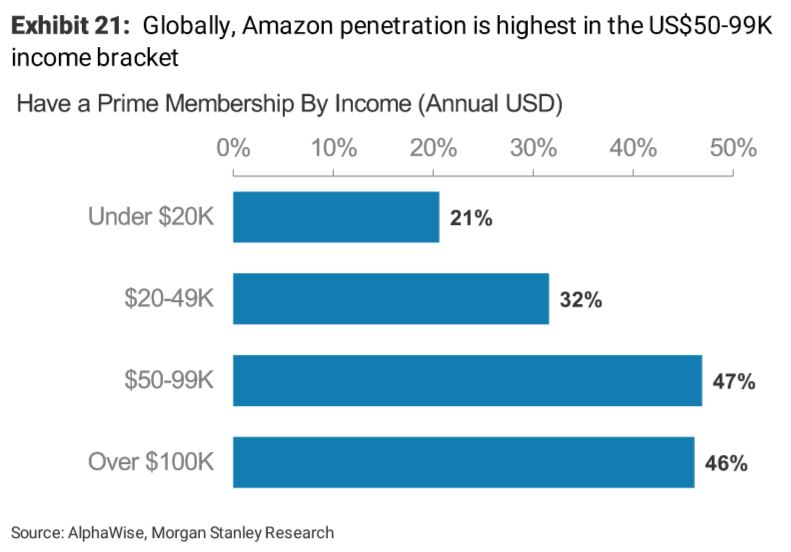 The analysts said products sold on Amazon Australia are generally as cheap or cheaper than domestic competitors.

“Price will be an important driver of early uptake, in our view, but as consumers become dependent on the convenience Amazon offers, the initial price sensitivity is likely to subside.”

Following the federal government’s decision to enforce GST on foreign purchases over $1,000, Amazon banned Australian consumers from purchasing items on its US and UK sites.

Instead, it’s set up a Global Store option on the Australian site, as a way to funnel consumers to its domestic Prime offering.

“We think this will give Amazon instant scale in Australia and drive adoption of the Australian website,” Morgan Stanley said.

They said that around 66% of the 380,000 items eligible for Amazon’s Prime delivery service in Australia are from the newly set-up Global Store.