A few years ago I moved across the country, a time zone away from my family and most of my friends. Moving across the country comes with a number of challenges, but the biggest of those ended up being the whole friends thing. Going from a decently large network of friends to knowing that one guy I hung out with at a party a few years ago caused some serious FOMO when my friends back home were going out or having a movie night.

One thing we tried early on in my move was to have me video call into group events like movies. The whole idea was for us all to press play at the same time on a movie, and then we could talk about it while it was going on and sort of watch it together. This never worked according to plan.

Based on personal experience, syncing up Netflix streams is pretty impossible on your own. Someone is always a few seconds too early, or a few seconds too late, and in the end it winds up being infinitely more trouble than it’s worth.

Luckily, now there are a handful of different tools you can use to make that magic happen.

My favourite of the options out there is Netflix Party (another good similar option is Showgoers). It’s a Chrome extension that both you and your friend download.

To use it, you open the video you’d like to watch (but don’t press play!) and then click on the Netflix Party button on your Chrome toolbar. Each “party” has it’s own unique ID, so you can pass the code out to your friends so you can all sync up. 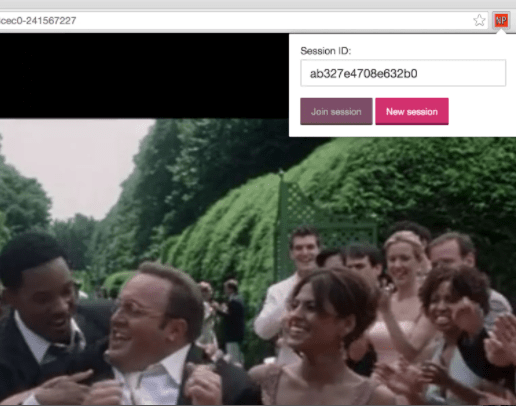 There’s also a built-in group chat so you can discuss what you’re watching in real time without annoying someone in the group that would rather everyone shut up and pay attention.

The downside, obviously, is it requires you watch using Chrome, which can get annoying if you want to watch with a group on a television. If you’re travelling and want to binge watch something with your significant other back home, or you just want to relive movie night with some far-away friends, it can be a decent way to make it happen.