Improve Your Handwriting By Slowing Down

Every now and then, you have to write something longhand for someone else to read: A note, a notice, a birthday card. If you’re like the many people we’ve gotten notes or notices or birthday cards from, it sometimes comes out illegible. We’ve presented many methods for improving your handwriting, but before you try them, just try slowing the hell down.

Your typical cursive handwriting is optimised for speed. It’s for getting down thoughts as fast as possible, and it only needs to be legible to yourself, usually to transcribe it. And when you’re taking notes or writing something creative or journaling, speed matters, so you sacrifice some legibility. That’s the handwriting you need most often, so it’s your default mode.

But when you’re writing a note to be read by someone else, your muscle memory kicks in, and you scribble the note at maximum speed. You’re defeating the purpose of the note. You might think you just have “bad handwriting”, but barring a disability, you can fix this if you just slow down.

I guess this is “mindfulness”? Just, you know, pay attention to the purpose of your actions? It seems obvious, but it must not be, because the most famous bad handwriting comes from doctors, the people whose handwriting can literally kill someone.

Slow handwriting will, obviously, take longer. I transcribed a passage from Jorge Louis Borges’s “The Library of Babel” at my usual writing speed, then again slowing down for legibility. The slow version isn’t pretty, but at least I wouldn’t be embarrassed to put it in a birthday card. 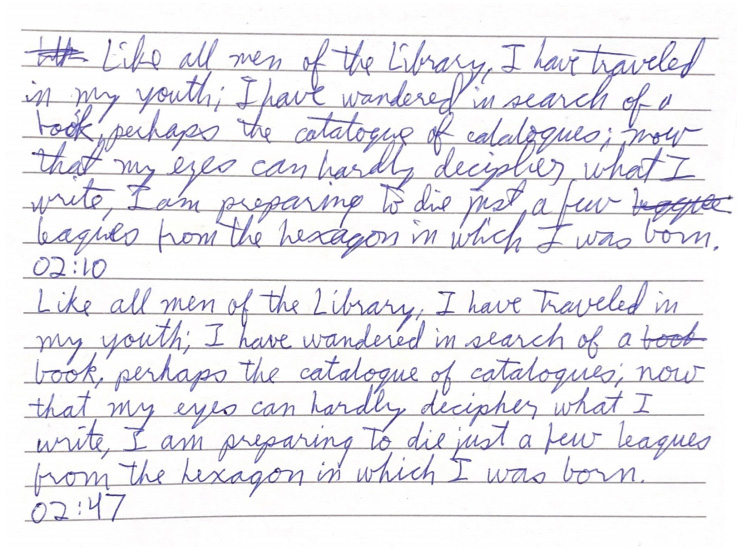 The first transcription took 2:10, the second 2:47: A 28 per cent increase. Your time increase might be greater or less, but it’s probably a tolerable difference, most times that you’re writing longhand for someone else.

If writing slowly drives you crazy or interrupts your thought process, write a rough draft in note-taking hand, and transcribe it after. Most communication is improved by a second draft. Back before typewriters and computers, all kinds of important information had to be written by hand. Library catalogue cards, for example, had to be legible to a wide audience. So library scientist Melvil Dewey (of the decimal system) designed a legible handwriting system. Speed varied widely:

That’s a 29-243 per cent increase. So be glad you’re not writing a library catalogue longhand, unless you are, in which case please post pictures.