How To Keep Properly Hydrated On A Long Flight

Flying dehydrates you — a lot. You probably know that it’s a good idea to drink water before, during, and after a flight, but how much is enough?

Photo by Son of Groucho.

Why Flying Dehydrates You

If you step off of a plane and feel like crap, it probably isn’t because you’re sick, but because you’re dehydrated. Not drinking and retaining enough water can make you feel fatigue, headaches and nausea, and aeroplanes are the perfect environment for draining you of all moisture.

Basically, you’re flying in a sky desert, where the humidity hovers around 10-20 per cent (drier than the Sahara) thanks to the plane’s air circulation system. Compare that to the typical 30-60 per cent humidity you’re used to on the ground and it’s no wonder flying dehydrates you. Physiotherapist Yasmin Badiani tells Marie Claire that a lot of your water loss is a combination of the cabin’s lack of humidity and its oxygen-thin air, which increases your breathing rate. Plus, you’re probably doing some sweating if you have any nerves when you fly. Badiani says that men can lose around 2L of water during a 10-hour flight (four per cent of your bodily water), and women can lose around 1.6L.

How Much Water You Should Drink

How much water you need to drink depends on how long your flight is. According to the Aerospace Medical Association, you should drink about 240mL of water for every hour you’re in the air. Peter Hackett, MD, the director of the Institute for Altitude Medicine, tells Condé Nast Traveller this is especially the case if you’re on flights longer than three or four hours. Flights shorter than that won’t be too dehydrating otherwise, says Hackett.

But you shouldn’t drink all of that water at once. Leonard Smith, a gastrointestinal and vascular surgeon, explains at Mel that pounding an entire bottle of water at once doesn’t do much for hydrating. If you drink too much water too fast, you dilute your blood, which causes your kidneys to excrete water faster, and that means you’re peeing out all that water before your body can use it to hydrate itself. No chugging! That said, if you do drink too much water, you at least force yourself to get up and go to the bathroom, which helps prevent blood clots in your legs. But you can always get up to move even if you don’t have to pee.

Make Up for Any Booze You Drink 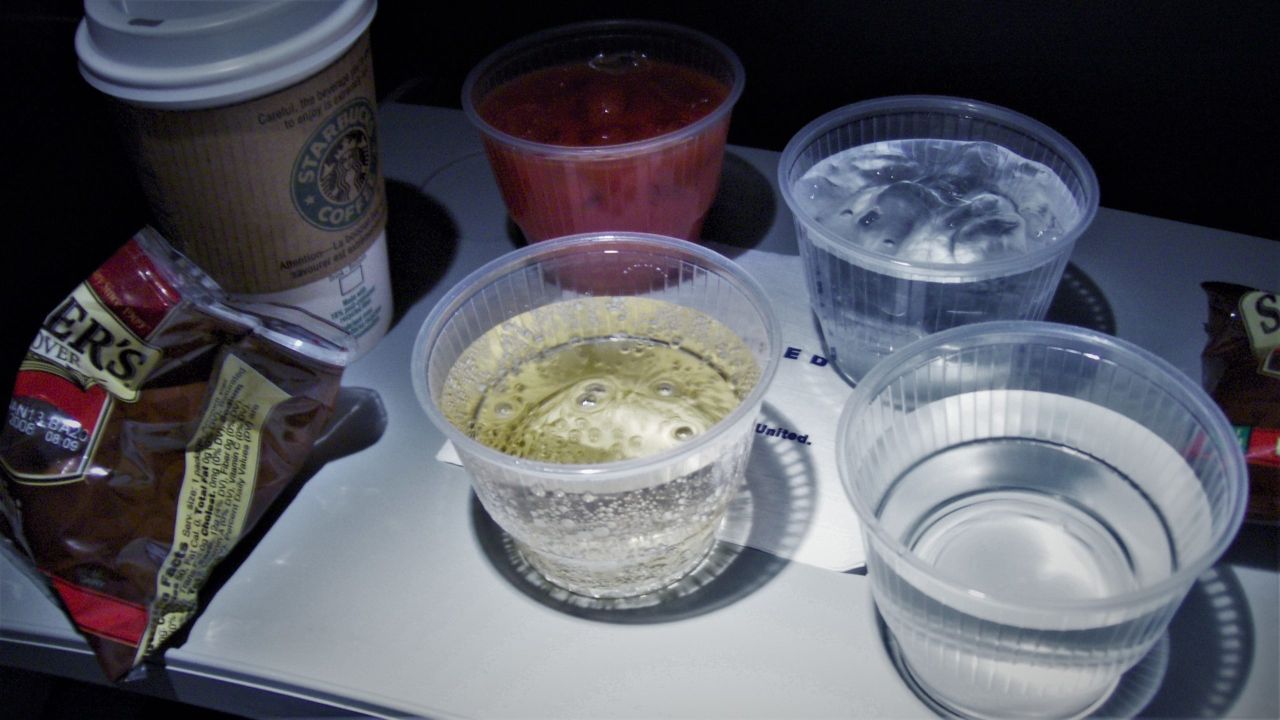 OK, so the drink cart is coming around and you’re dying for a Bloody Mary (make mine a double). That’s fine, but ask for a cup of water in addition to your cocktail. Just one 240mL cup of water for every drink will be sufficient. And if you can help it, try to drink as little alcohol as possible. I know it’s tempting.

Other Ways to Stay Hydrated

Water isn’t the only way to keep your body from shriveling up into a dried husk. You can also get plenty of hydration from coffee — don’t believe the myths about it dehydrating you more — or tea. Just be aware that aeroplane water isn’t always that clean, and that’s what’s used to make them. Some flight attendants won’t even dare to drink the coffee and tea.

If you find that worrying, you can always pack a hydrating snack instead. Fruits, vegetables and even yogurt can help a lot. Don’t eat foods with too much salt, though. If you get dry sinuses, a saline nasal spray can help keep your nose from drying out too, which may help you avoid a headache. Lastly, the cabin’s dry air takes a toll on your skin as well. A small, less-than-100mL bottle of lotion can do wonders for your skin.