cocktailsdrinkingpartiesscience
To sign up for our daily newsletter covering the latest news, hacks and reviews, head HERE. For a running feed of all our stories, follow us on Twitter HERE. Or you can bookmark the Lifehacker Australia homepage to visit whenever you need a fix.

Heavy drinking can give you a hangover, sure, but part of the reason you feel so sluggish and worn out after a night of drinking is because you get such terrible sleep. It only takes a couple of drinks to ruin your rest, but all isn’t lost. Here’s how to turn a potentially restless night into something that’s at least a little recharging.

Before You Go Out 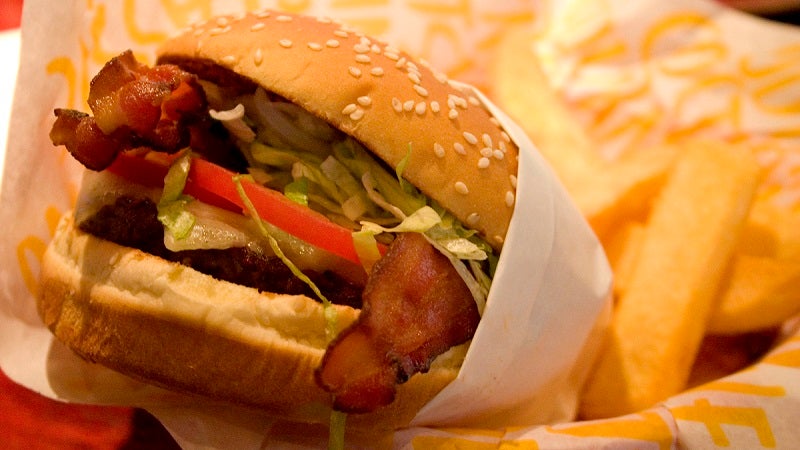 If you’ve ever had a few drinks before bed and found yourself sleeping deeply then shallowly, waking and falling asleep again all night, that’s because of the “rebound effect“. It makes you constantly slip out of the deep sleep and into lighter stages of sleep that are easier to wake from.

As Timothy Roehrs and Thomas Roth of the Sleep Disorders and Research Center explain, the rebound effect is the body’s way of snapping back to normal after the alcohol that initially helped you fall asleep is processed. Instead of being drunkenly sleepy, your body snaps back to life. This makes you highly sensitive to your environment, like light coming through your window, the sound of a car horn outside, even a slight change in temperature. Once the alcohol is gone from your bloodstream, the tiniest of variables can jolt you awake, even though you know you need more rest. If you’ve ever woken up crazy early for no reason after having a few glasses of wine the night before, now you know why.

Make Your Bed Welcoming for When You Get Home

If you head out drinking right before you know you’re going to bed, you can’t avoid these disruptions in your sleep. But if you prepare your sleeping environment before you head out, you can do a lot. For starters, remember the basics. Good sleep hygiene is even more important now. Filter out the light in your room with blackout curtains, or get a sleep mask. Set the temperature so it’s nice and cool — around 15 to 20C — so you don’t get too hot when you finally crawl in bed, and get some earplugs to help block out any noise in your environment. And if possible, Elizabeth Kovacs, PhD, Director of the Alcohol Research program at Loyola University Chicago, says that getting good sleep each night leading up to that party will reduce the impact one night of drinking will have. Basically, pretend that you’ll be trying to sleep in a loud, well-lit factory that night and prepare accordingly.

Before you take your first sip of alcohol, make sure you’ve had a solid, balanced meal to help regulate your body’s absorption of alcohol. A nice, slow-burning meal with some protein, a few carbs and some fat will introduce the alcohol to your bloodstream gradually so your body can process it without overworking itself. Red meat is a pretty decent choice because, according to Jason Burke, MD, creator of Hangover Heaven, it has a high concentration of protein and B vitamins, which help process alcohol byproducts in your body.

While You’re Out and Drinking 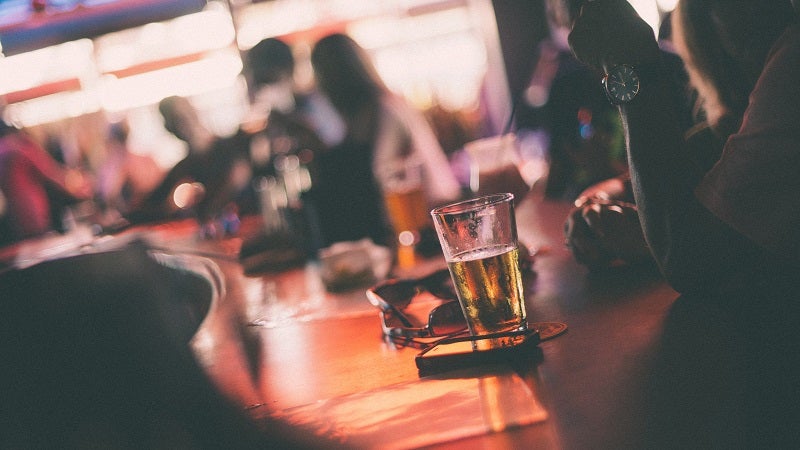 So you’re out, living it up, enjoying a few drinks with friends. Alcohol is a diuretic, which means it’s going to make you pee — a lot. That also means that as you drink you’re dehydrating yourself. Dehydration is what gives you a headache when you get home (not to mention the next day), makes you feel dizzy and all in all makes you hot, uncomfortable and toss and turn all night long.

Obviously the best solution is to drink water. Easy enough, but the key is how much and when. If possible, alternate between one drink and one glass of water. This keeps you hydrated while you drink, and it fills you up so don’t end up drinking as much alcohol — which is what will save you the most grief in the long run. And it’s a good idea to avoid caffeine. That means no vodka Red Bulls and steer clear of the Irish coffees.

Cut Yourself Off Early

Finally, cutting yourself off early is the smartest thing you can do if you know you need to sleep. If you still want to have a good time and avoid being a party pooper, front load your drinking for the night (after having something to eat), and slowly taper off from there over the whole evening. Having dinner with friends first and then planning to hit the bar? Have a few glasses of wine at dinner, and nurse a drink or two at the bar. Don’t worry too much about mixing alcohols; the old sayings like “liquor before beer, you’re in the clear” and “beer before liquor, you’ve never been sicker” are largely nonsense. It really just comes down to your individual tastes and preferences.

Ideally you would cut yourself off so most of the alcohol in your system has been metabolised before you even get home and try to sleep. This way you get decent rest and miss out on the hangover the next day. If you want a ballpark estimate, aim to cut yourself off at least four hours before you go to sleep. That might seem like a long time to go without a drink at a party, but if you take into account how much time it takes you to get home, unwind and then hit the sack, you’ll still enjoy yourself while your body processes what you’ve already enjoyed.

When You Get Home 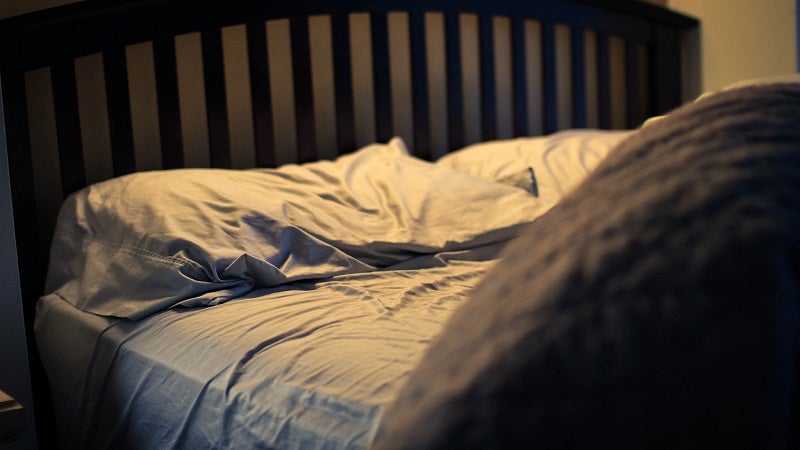 If you’re sober enough to comprehend what’s going on, these before-bed tips will give you the best chance of safely sleeping through the night.

To combat the eventual alcohol-related headache and fight off the early effects of a hangover, take a small dose of Ibuprofen when you get home. Stay away from Panadol or other paracetamol-based medicines as they can damage your liver when mixed with alcohol. Also, stay away from any sleeping medication. It might sound like a great way to cheat the system, and get some rest, but alcohol can multiply its effect, mess with your breathing and cause pauses in your oxygen intake, all of which are bad news. You can wake up with a headache, fogginess and will feel less rested than if you had done nothing at all, if you wake up at all.

It’s also a good idea to plan out some before-bed snacks so you don’t raid the fridge if you’re hungry when you get home. Focus on stabilising your gut so you don’t get indigestion, and providing your body with the vitamins and nutrients it needs to process the alcohol efficiently while you sleep. You can’t go wrong with high-fibre foods, like vegetables, fruits and crackers. High fibre foods will slow the digestive process some, meaning it will also slow the absorption and processing of alcohol, but it’s a worthy trade-off if you get indigestion after drinking, or your stomach is unsettled. 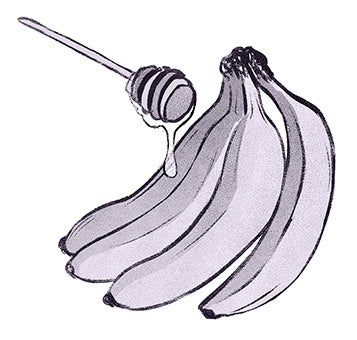 Honey is another solid post-drinking snack. Dr Richard Stephens at Keele University explains that low blood sugar can make the after-effects of drinking alcohol worse. A spoonful of honey, some honey slathered on toast or even a banana will provide you simple, easy-to-break down sugars to fuel the body’s breaking down of alcohol through the night. Keep your before-bed foods neutral. These are great snacks for the morning after as well, when your blood sugar will be especially low.

It’s also a good idea to pop some vitamins before you hit the hay so you can replenish any you may have lost while drinking. A standard multivitamin is sufficient, but according to a study published in QJM: An International Journal for Medicine, alcohol reduces your body’s supply of B vitamins (used to break down the alcohol), so a B vitamin supplement might be a good idea. Don’t pop a ton of pills before bed or the next morning, but thiamine, folic acid and magnesium sulfate can help as well.

In the ER, doctors will give patients with acute alcohol toxicity a mixture of these via IV in what’s known as a “banana bag“, which helps correct the chemical imbalance in the body. You can prepare your own mixture of “banana bag” supplements (in smaller doses obviously) to do the same thing. 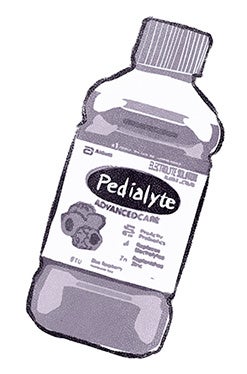 Have one last small glass of water before bed, then fill a glass to keep on your bedside table in case you get thirsty later. Don’t drink too much water — you’ll just wake up through the night to go to the bathroom, time you could be sleeping. You could also consider Pedialyte, a nutrient-rich option that will hydrate and isn’t full of sugar like other sports drinks. It won’t instantly cure your dehydration or potential hangover, however, so don’t treat it like some magical potion you can just chug when you get home (it’s actually better the morning after). The key to beating dehydration is prevention.

Finally, put your phone on silent or into aeroplane mode so notifications don’t wake you. If you can, turn off your alarm and plan to sleep in. You’ll need more time to get the rest you need. However, if you’re reading this, you probably need to get as much sleep as you can, and probably can’t sleep in. If that’s you, try to call it a night next time.