Mayweather Vs McGregor: How To Watch In Australia Free And Online

Next week, the biggest star in mixed martial arts will face off against the biggest star in boxing in what is destined to be the most lucrative and ridiculous fight in the history of sports. In one corner: Conor “the Notorious” McGregor (who has never fought in a professional boxing match.) In the other: Floyd ‘Money’ Mayweather (an undefeated world champion.)

If you’re planning to watch the match live – and a huge chunk of humanity is – here are all the ways to tune in from Australia. We’ve also included pub venues, fighter statistics, Mayweather Vs McGregor start time, betting odds and everything else a fighting fan needs to know.

For the past few months, the Mayweather Vs McGregor travelling circus has been pulling no punches. (You can watch the expletive-filled international press conferences here, here, here and here.) In just a few day’s time, the relentless trash talking will finally culminate in physical blows inside a boxing ring. Here’s everything you need to know.

The Cheapest Ways To Watch McGregor Vs Mayweather In Australia

Mayweather Vs McGregor: What time does the fight start in Australia?

The Mayweather Vs McGregor boxing match is set to go down on Sunday, August 27 (AEST). Coverage will start at 11am (AEST) with the main card loosely scheduled for 2-3pm (AEST).

Here’s the full breakdown for each Australian time zone:

Where is the Mayweather Vs McGregor fight being held?

The Mayweather Vs McGregor fight will be held at the T-Mobile Arena in Las Vegas.

How to watch Mayweather Vs McGregor on TV

The Mayweather Vs McGregor fight will be shown on the Pay-Per-View channel Main Event. Paying customers will be able to follow the action on their large screen TVs via the Foxtel app or Fetch TV.

How to watch Mayweather Vs McGregor online

If you don’t have access to a smart TV, the aforementioned Pay-Per-View options can be accessed on a computer or tablet. You can also purchase the fight on UFC TV.

Dealhacker: Get 50% Off Mayweather Vs McGregor Pay-Per-Views

Mayweather Vs McGregor is set to be the highest grossing boxing match of all time - in no small part due to the inflated price of tickets. Purchasing a live stream of the match will set you back $59.95. Unless, that is, you take advantage of a Foxtel streaming loophole that brings the price down to under $30. Here's how it's done...

How to watch Mayweather Vs McGregor at the pub

The Best Irish Pubs To Watch McGregor Vs Mayweather In Australia

On Sunday afternoon, Aussie boxing fans will converge on pubs and sports bars around the country to watch Conor McGregor duke it out in the ring against Floyd Mayweather. It's going to be quite the spectacle.</p><p>If you want a rowdy, ringside-esque experience, Australia's authentic Irish pubs are the ultimate venue. There will be cheering. There will be chanting. There will be drunken debauchery as only the Irish know how. With that in mind, here are the best Irish pubs in each capital city - all of which will be showing Mayweather vs McGregor on big screen TVs!

The Foxtel Now, Main Event and UFC TV pay-per-views can all be accessed on laptops, tablets or smartphones. Bring some headphones and pretend to look busy!

How to watch Mayweather Vs McGregor for free The only legal way to watch the Mayweather Vs McGregor fight without paying is to head down the pub (see above.) With that said, Australia is a nation of ex-convicts… and convicts find a way.

One option is to trawl the internet on August 27 for a cheeky broadcast on Facebook Live. This is precisely what happened during the Anthony Mundine Vs Danny Green pay-per-view boxing match back in February. Darren Sharpe, a mechanic from Brisbane, ended up getting 112,000 viewers piggybacking off his Facebook Live stream of the fight.

Needless to say, Foxtel was not amused, but it did not pursue the matter legally. Sharpe was eventually forced to issue a public apology for breaking copyright law, but that was all he copped. Meanwhile, none of the people who watched the stream were punished in any way.

Just be aware that this is a pretty risky way to watch the fight – if a Facebook Live stream does appear, it will be of the handheld, bootleg variety and the broadcast could be shut down at any second. Also, it’s clearly an extremely dodgy thing to partake in. (For those interested, you can read up on the legalities of Facebook Live event streaming here.)

How to watch Mayweather vs McGregor at the cinema

You read that right! Village and Event Cinemas will be streaming the match live on select cinema screens. Tickets will cost $28 per person or $45 for Gold Class. Click here to book your tickets.

How to watch Mayweather Vs McGregor live

Planning a trip to Vegas? Getting into the venue won’t be cheap: ringside tickets will set you back over $11,000 (!), while the cheapest available seats are still in the region of fifteen-hundred bucks. You can purchase tickets on ticketmaster. (We advise not gambling at the casino too – nobody has that much money.) 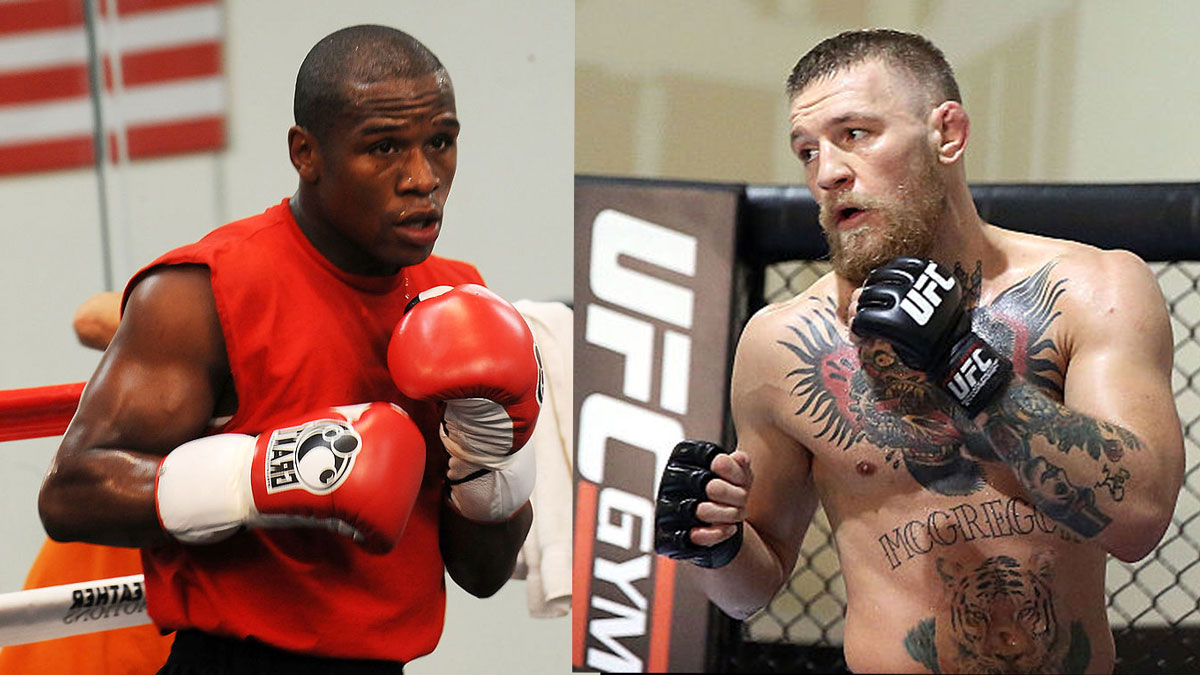 The Mayweather Vs McGregor fight will follow boxing rules, comprising 12 three-minute rounds at 154 pounds with eight-ounce gloves. (Yes, this means McGregor will not be able to use any of his MMA moves, with the exception of legal punching blows.)

As you can see, Mayweather is at a significant height, reach and age disadvantage, but his 49-0 boxing record speaks for itself. McGregor is very much the underdog here. With that said, self-belief goes a long way and McGregor has this in spades.

We do not encourage gambling at Lifehacker, but if you’re going to risk your hard-earned cash on the outcome of a sports match, it might as well be for something outlandish and crazy like this.

Here are the current odds from TAB for various outcomes:

The safe money is on a head-to-head Mayweather victory, but at odds of $1.18 it’s hardly worth the risk. If you’re going to take a punt, go full madman and back a McGregor KO in round 2.

This will give you a nice 20x return on whatever you put down. (For what it’s worth, the Irishman has vowed to knock Mayweather out inside two rounds and most experts agree that if McGregor is going to win he will need to do it early.) A more conservative bet is a Mayweather victory by decision, which is currently sitting at $4.

What is a Mayweather Vs McGregor?

If you’re scratching your head about all this but want to be part of the conversation, we’ve got you! Here is your Complete Bluffer’s Guide to Mayweather Vs McGregor.

The Bluffer's Guide To Mayweather Vs McGregor

It's the 'fight of the century'. Boxing versus MMA, Old versus New, Floyd 'Money' Mayweather versus Conor 'The Notorious' McGregor. Nothing about it makes any goddamn sense whatsoever but it's happening and there's nothing anyone can do about that.</p><p>The only thing we can do now is prepare. </p><p>Welcome to the bluffer's guide to Mayweather vs McGregor.