editors pickemotional healthfriendshippersonal financerelationshipstwocents
To sign up for our daily newsletter covering the latest news, hacks and reviews, head HERE. For a running feed of all our stories, follow us on Twitter HERE. Or you can bookmark the Lifehacker Australia homepage to visit whenever you need a fix.

You might remember that Friends episode in which the broke friends — Rachel, Joey and Phoebe — get annoyed at their wealthier counterparts for always suggesting expensive outings. “Like we can afford to go here and there,” Joey complains. Life doesn’t work out as neatly as sitcoms, of course, so financial resentment can actually be a nasty problem in the real world.

We like to think our friendships are strong enough to handle something as silly as financial differences. But the truth is, money can make things awkward, especially when one of you earns significantly less (or more) than the other. Here's how to handle the most common issues that can arise.

What Is Financial Resentment?

In her new book, End Financial Stress Now, author Emily Guy Birken explains that financial resentment can be problematic on many levels. It can cause problems in our friendships, sure, but it can also turn us off of money altogether.

“Financial resentment is a corrosive emotion, which leads to two types of self-defeating behaviour: Abandoning financial goals, and trying to get even,” Birken told us.

When you give up on your goals, like getting out of debt or saving up for a big trip, you basically give into the idea that you have no control over your situation, she adds. Resentment takes over, making your goal progress feel insignificant and futile.

“And if you try to get even, that often means you are either working to punish those you hold responsible for your economic injustice, or you overspend in order to show that you are ‘just as good’ as the people you resent.”

Neither option does much for your wallet or your mindset, for that matter. To effectively kick your resentment to the curb, it helps to know where it comes from, and in her book, Birken categorises two basic types of financial resentment.

First, there’s relationship-based financial resentment, the “I can’t afford to hang out with my friends” variety. As Birken points out, it isn’t just about friendships, though.

“Relationship-based financial resentment is when you feel as though you have suffered some sort of financial injustice in a personal relationship,” Birken says. “A common example of this sort of resentment is the bitterness an adult child may feel when a parent’s will leaves another sibling more money. The resentful sibling may begrudge the other sibling’s larger share of the inheritance, while also resenting the parent who wrote the uneven will.”

It might also be resentment with a partner who outearns you. Different incomes often mean different money habits, and that can put strain on a relationship. Let’s say you start dating someone new and a few months in, she wants to plan a trip to New Zealand. There’s no way in hell you can afford it, so you pass, but as your relationship progresses, that trip becomes more and more important and you still can’t afford to go. Resentment builds on both sides.

This occurs when economic injustices get the better of you:

“Economy-based financial resentment is when you feel bitter about economic injustices that are part of larger problems affecting all of society,” Birken explains. “For instance, you may resent that someone is doing better than you financially when you feel that person is either less worthy than you or that he has made worse choices than you did. This kind of resentment is very common and has become a regular part of our political discourse.”

Especially given the income inequality of recent years, it isn’t hard to understand how someone might build up this kind of economy-based resentment. And, in fact, economic resentment and relationship-based resentment can go hand-in-hand: Here you are busting your arse to pay for university while your blueblood friend wants to go to dinner every night.

We’ve given you some practical tips for dealing with different habits in friendships, but managing the emotional stuff can be a whole different challenge.

Communication is effective, but it doesn’t work for every circumstance, especially if much of your resentment is based on economic issues. Thankfully, Birken offers some advice.

How to Let Go of the Resentment

Ultimately, resentment is about anger, and letting go of anger often means learning to forgive someone. It’s kind of weird to forgive someone who might not have done anything to you, though. Maybe you’re just upset that your friend doesn’t quite understand your own financial hardships. That’s OK — the key is learning to see things from their perspective, a habit better known as empathy.

“First, mentally switch places with the person you resent,” Birken suggests. “Generally, you are thinking of that person’s life in terms of the one thing she has that you do not — but life is not a buffet, and it’s not possible to switch out a single aspect of her life with yours. Would you really prefer to have all of her problems, weaknesses, and trials, just because of the injustice that has been dealt to you?” 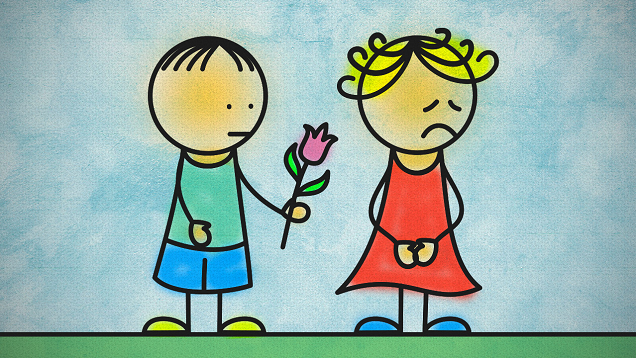 How To Forgive Someone Who Has Wronged You

When somebody wrongs you -- either by accident or on purpose -- it can be hard to get over it. You may never be able to reconcile with the wrongdoer, but forgiveness is divine and it gives you a chance to be a better person. Here are some ways you can work toward forgiving.

Birken adds that it can be useful to ask yourself a really simple question: What are you getting out of your resentment? Answering this forces you to think about the situation more objectively.

“You might be displacing anger at yourself onto the person you resent, or you may feel comfortable with or even enjoy the righteous anger you feel,” she says.

Asking yourself what you’re gaining by feeling resentful, which probably isn’t much, can help you to let go of the anger.

“Finally, you need to think through what story you are telling yourself about the financial injustice that you have suffered,” Birken says. “We often resent situations because we don’t know the entire context. We fill in the blanks with a story that makes sense to us, but may have nothing to do with what the other person intended. Recognising what you actually know and what you have made up can help you to release the resentment.”

This brings up another interesting point: We often judge other people’s spending without understanding the full picture. We jump to conclusions, which can also lead to resentment.

Personal finance writer Ramit Sethi calls this spending hypocrisy, and he uses LearnVest CEO Alexa Von Tobel as an example. Von Tobel revealed her own spending habits and readers tore her apart, criticising her $30 lunch or her decision to take taxis every day. Sethi explains why this kind of judgement is unproductive:

Instead of automatically condemning the author for her spending habits, the angry commenters above should have tried to figure out how she affords such a lofty lifestyle in the first place. “But Ramit,” you might say, “she went to Harvard. She’s clearly a wasteful trust-fund baby who’s living off mummy and daddy’s money.” Maybe. Maybe not. Who knows? But if that’s your first thought, you’re guilty of the Shrug Effect. A better way to approach the question would be to acknowledge that she probably has a few advantages you don’t, but focus on the things she DOES control — which you can learn from. If you want to live her lifestyle, it pays to ask: How could she be earning SO MUCH that she could afford to take cabs every day? What is she doing that I don’t know about? Who can I talk to to learn more? How can I earn more money?

So instead of writing your own story, recognise what conclusions you might be jumping to, then try to fill in the blanks with information that might actually help your situation.

Signs That Resentment Is More Serious

“Sometimes, the financial resentment you feel in a relationship is actually a sign that you are being financially abused,” Birken points out.

In other words, not all resentment is unfounded. Like other forms of abuse, financial abuse is ultimately about control. The abuser wants you to feel isolated and dependent on them, and they can use money as a means for doing that.

“That means preventing you from having the financial autonomy, withholding necessities, giving gifts with strings attached, using your name or credit without your knowledge, or forcing you to work without pay,” says Birken.

If this is the case, the issue really goes beyond resentment. There are plenty of solid reasons for leaving a relationship, friendship or job, and financial abuse is certainly one of them.

“That is not something that you can fix with forgiveness,” she says.