Will It Sous Vide? Yabby-Stuffed Halibut

If you have recently purchased an immersion circulator -- or are looking to -- deciding what to cook first with your new toy can be a little overwhelming. Luckily, we do a fair amount of sous vide-ing around these parts and have a pretty good handle on what will sous vide and what won't.

Seafood was a very popular subject in this week’s topic-picking session, with all sorts of fish, both finned and shell, being discussed and suggested. I was pretty set on lobster, but then I saw this suggestion from tag007:

You can go for a classic blackened tilapia or go for some mahi mahi tacos. If you’re being really adventurous, go for a crab stuffed catfish.

I was immediately enthralled with the idea of stuffing a non-finned sea creature into a finned one, and just happened to have some yabby tail meat in my freezer. I thawed it out — using my Anova, of course — and prepared a little seafood stuffing. 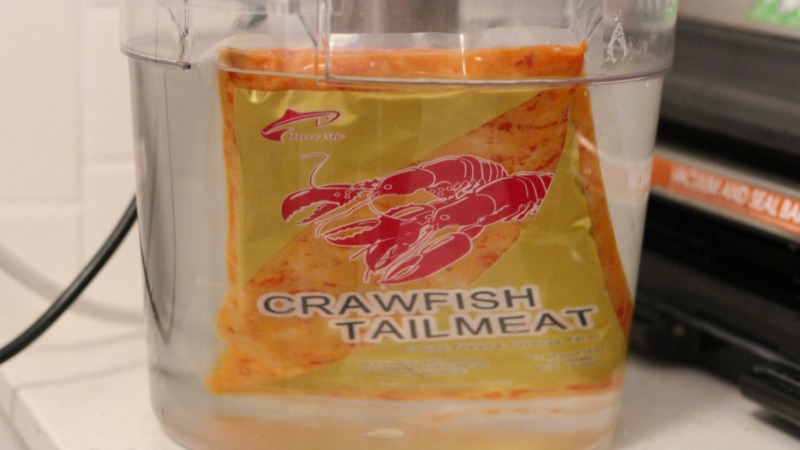 I just set the temp to 72F; it was fully thawed in about 15 minutes.

I just set the temp to 22C; it was fully thawed in about 15 minutes.

Honestly, you don’t have to use yabby — crab or prawn would work just fine — but I’ve been looking for a use for this stuff for a while now. To make my tasty tail-meat mixture, I mixed the following:

I combined everything into a bowl, taking care to keep the tails as whole as possible.

For the finned fish, I went with halibut. My father moved to Washington state when I was a teen, but before that, my seafood-eating experiences had been largely Southern, with a lot of catfish, fried oysters and (obviously) yabby. I have a vivid memory of my stepmum preparing halibut for us for the first time after a day at Powell’s books. It was decidedly different from any fish I’d ever eaten, completely delicious, and very Pacific Northwest. So though you probably won’t find a lot of yabby-stuffed halibut on any menus, it makes sense to me, given the varied cuisine of my upbringing.

Before that happened, however, I gave the two 225g filets of firm, white fish a good salting, and let them hang out for about half an hour while I let the immersion circulators warm their respective baths. 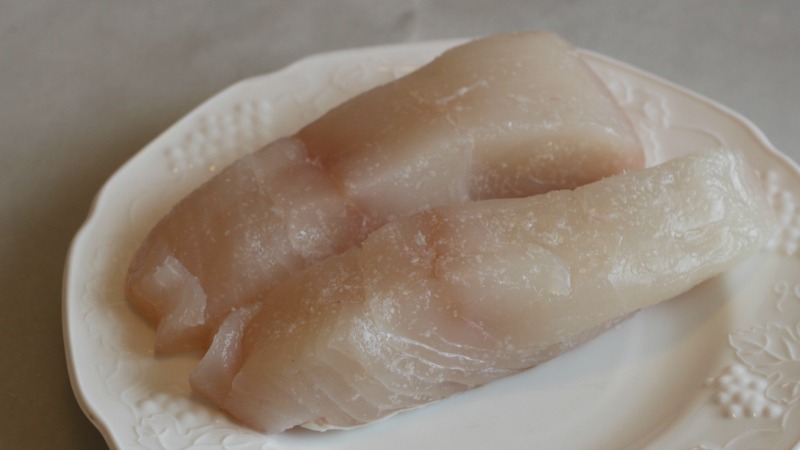 I then made fairly deep vertical slits down each filet (skin side down), and stuffed them full of tasty tail. 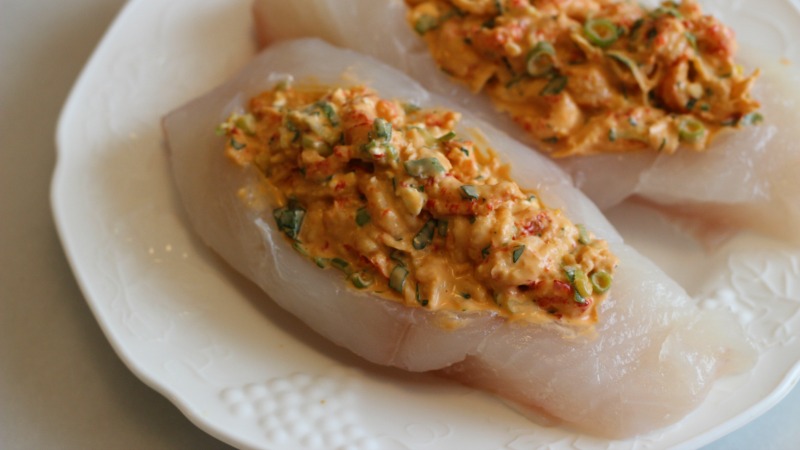 I then vacuum sealed each filet o’ fish in its own little bag, and dropped them in two different baths set at two different temperatures. 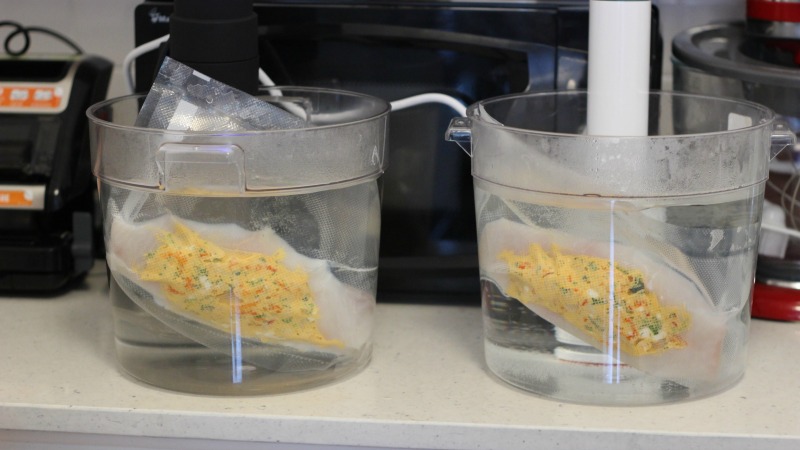 Why two temperatures? It’s called experimenting, my friends. I had never cooked fish this way before, and two of the most trusted voices in sous vide cooking — the Food Lab and ChefSteps — seemed to disagree on the best temperature to cook halibut. ChefSteps recommends a cooler 50C for all fish, halibut included, while the Food Lab goes with the warmer 54C for a firmer, meatier texture. Having never tried either one, I decided to give both a go.

After an hour in their little baths, I gently removed the skin, keeping the filets in the bags while I did this to keep the filling from falling out. I then pan fried the bottoms of the fish in hot butter, before plating them up and drizzling the gorgeous browned butter on top. 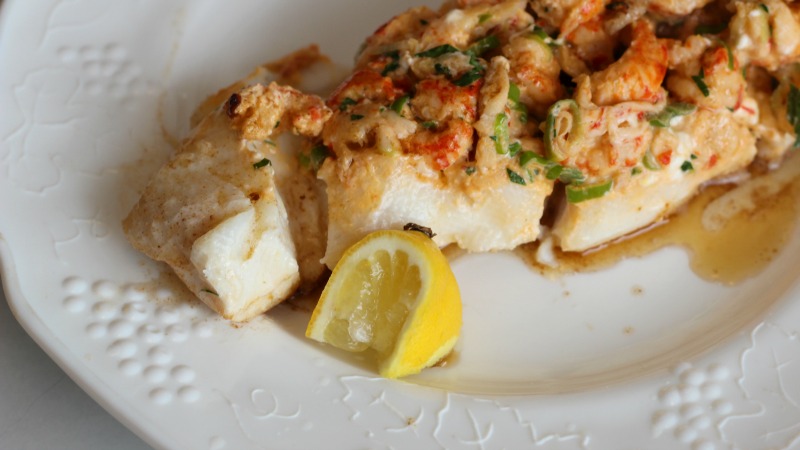 I also added a squeeze of lemon.

I also added a squeeze of lemon.

As you can see from the above picture, the fish had a hard time keeping it together, and pretty much fell apart into three separate pieces once I removed it from the bag. This didn’t make for the prettiest picture, but it had no negative affect on the flavour.

So now you must know: Will yabby-stuffed halibut sous vide?

The answer? Why yes, my friends. Yes, indeed it will. Like everything I cook using an immersion circulator, having such exact temperature control over my cooking environment let me cook my hybridised seafood dish to my preferred done-ness without fear of overcooking, which is always a delight.

In terms of temperature, I definitely preferred the fish cooked at the higher one. Halibut is a meatier fish and, while it isn’t quite as steak-like as swordfish, I think it benefits from a few extra degrees. 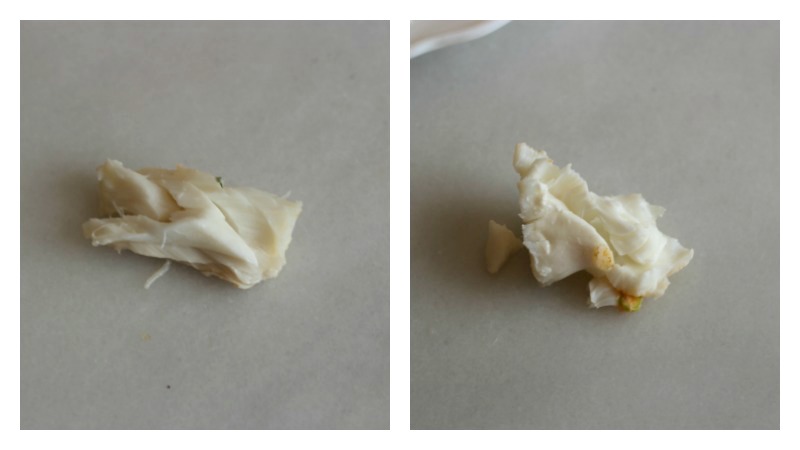 The halibut cooked at 50C definitely wasn’t bad, and it definitely wasn’t dry, but it was kind of soft and squeaky in the teeth, and the 54C halibut had bigger, firmer, more toothsome flakes. As for the stuffing? That was banging. The yabby was already cooked, but it warmed up quite nicely while nestled within the meaty walls of the halibut, and all the flavours came together quite nicely. Basically, this was a success, and I ate it up.