The Grown-Up Kitchen: How To Make A Damn Roux

A roux by any other name is still a roux, but maybe that other name should be “fat and flour paste thickener”, because the fancy French name seems to put people off.

The importance of a roux in gravies, sauces and soups cannot be overestimated, yet there are a startling number of home cooks who’ve never even attempted it. The good news is that a roux is very easy to master, and we’re going to walk you through it nice and slow.

First though, why do we even need these French things? Why can’t we just chuck some thickening starch granules into our soup or sauce and let things gel up on their own? According to Harold McGee in his ever-helpful food science tome, On Food and Cooking, if you add flour or some other starch directly to hot liquid, “it lumps up and never disperses evenly: The moment they hit the hot liquid, the clumps of starch granules develop a partially gelated, sticky surface that seal the dry granules inside and prevents them from dispersing.” Cooking the starch in an equal amount of fat before mixing it with liquid separates the granules, letting them gradually get to know their new aqueous friend, rather than seizing up due to an abrupt introduction. 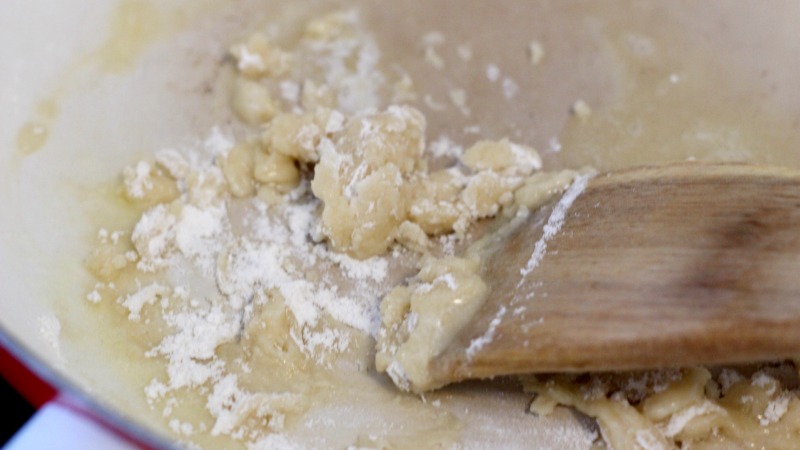 And that’s all that a roux — which actually means “red” — is: A mixture of fat and flour that’s been cooked a little bit (or a lotta bit, but we’ll get to that in a minute). There are three main endpoints to look for when making a roux: 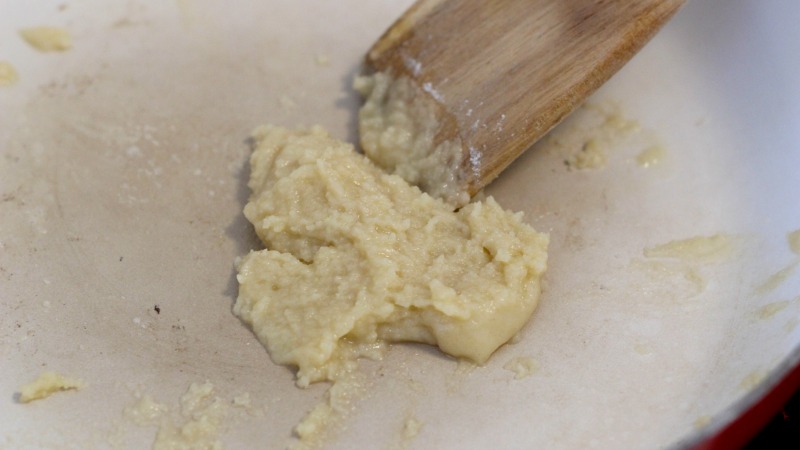 An “equal” amount of fat and flour is need for a roux, but not all measurement methods are created equally. Some recipes suggest doling out the two ingredients tablespoon for tablespoon but, if you really want to rock the roux, mass is the way to go.

This isn’t to say that a roux measured by volume will have no thickening power, it just won’t have as much. To get an idea of just how superior measuring by mass was, I made two gravies. The first I made my usual way. I got about two tablespoons of butter, weighed it, and then measured out the same amount of flour by weight (32g for each, which ended up being around three tablespoons of flour). I then melted the butter in the pan, added the flour, and pushed it around with my wooden spatula continuously until I reached that “frothy, but still pale” endpoint. 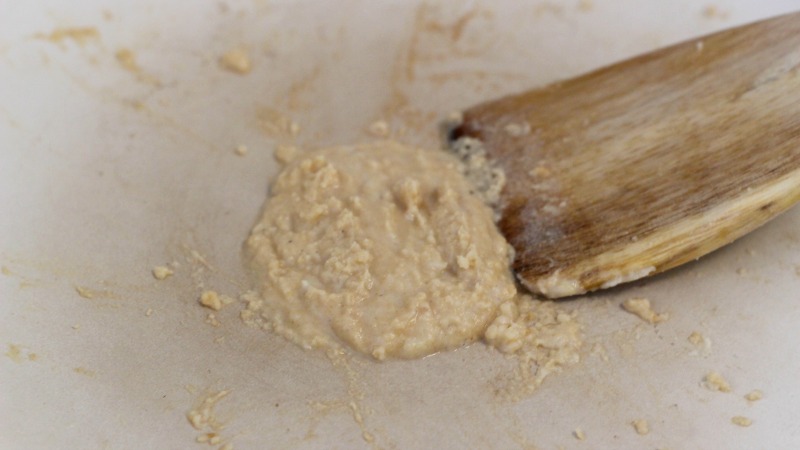 I then added a cup of duck stock, and watched in vague horror as everything clumped up. 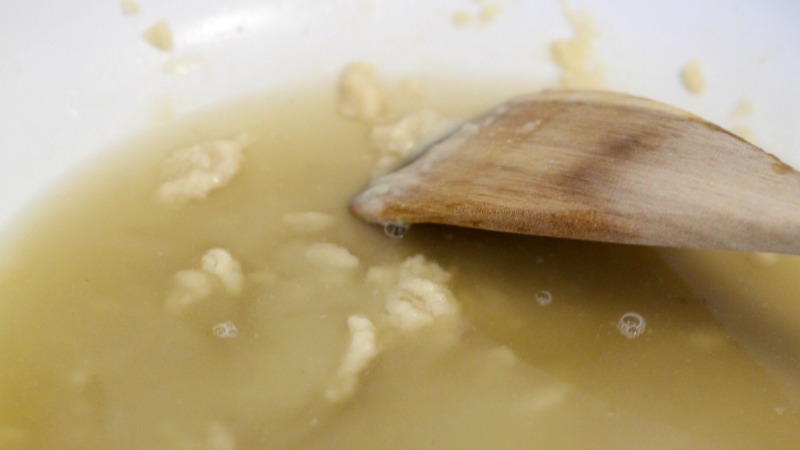 Luckily, with just a bit of vigorous stirring, the flour granules dispersed just fine and got to work transforming mere broth into mighty gravy. 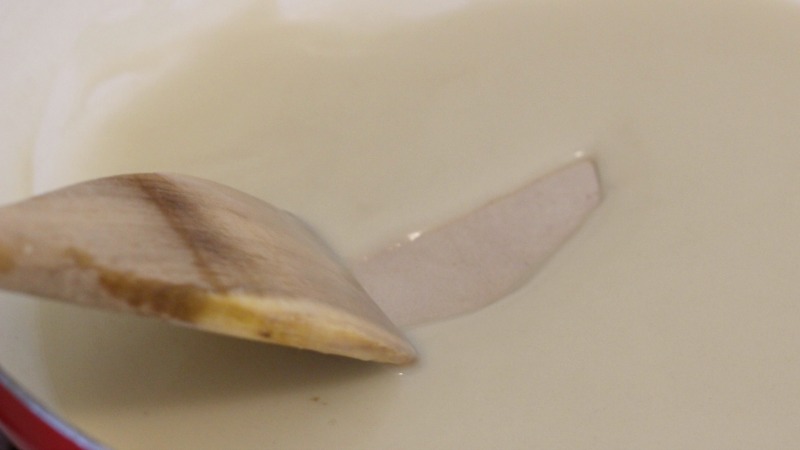 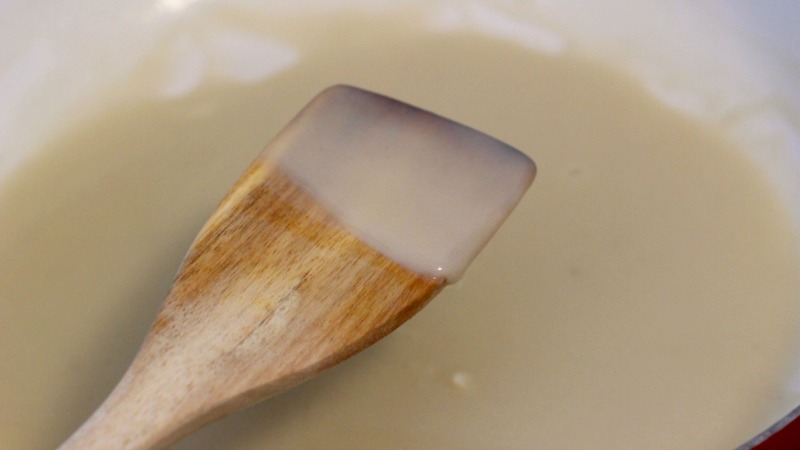 I then put the resulting gravy on some home fries, along with peas and cheese and a bunch of other nonsense. It was good.

To compare, I then made another gravy, this time measuring everything by volume. As would be expected, the roux was a bit looser, and — as you can see from the below photo — didn’t have quite the thickening power to take on a whole cup of stock. 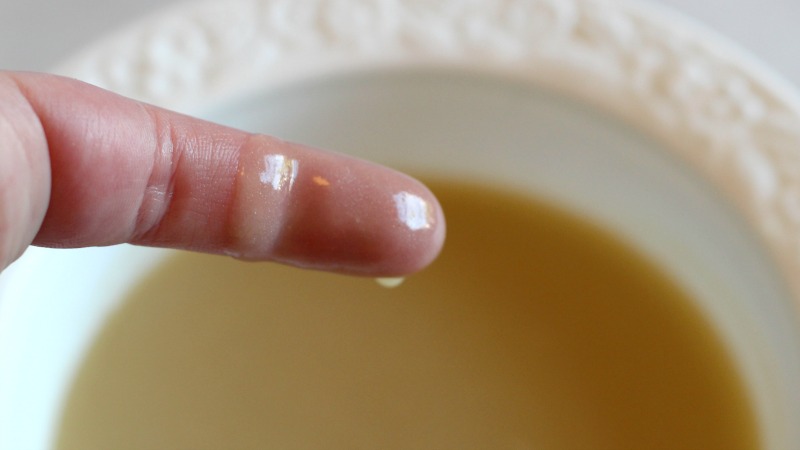 The moral of this story, my friends, is to measure by mass if you wish to amass delicious gravy. 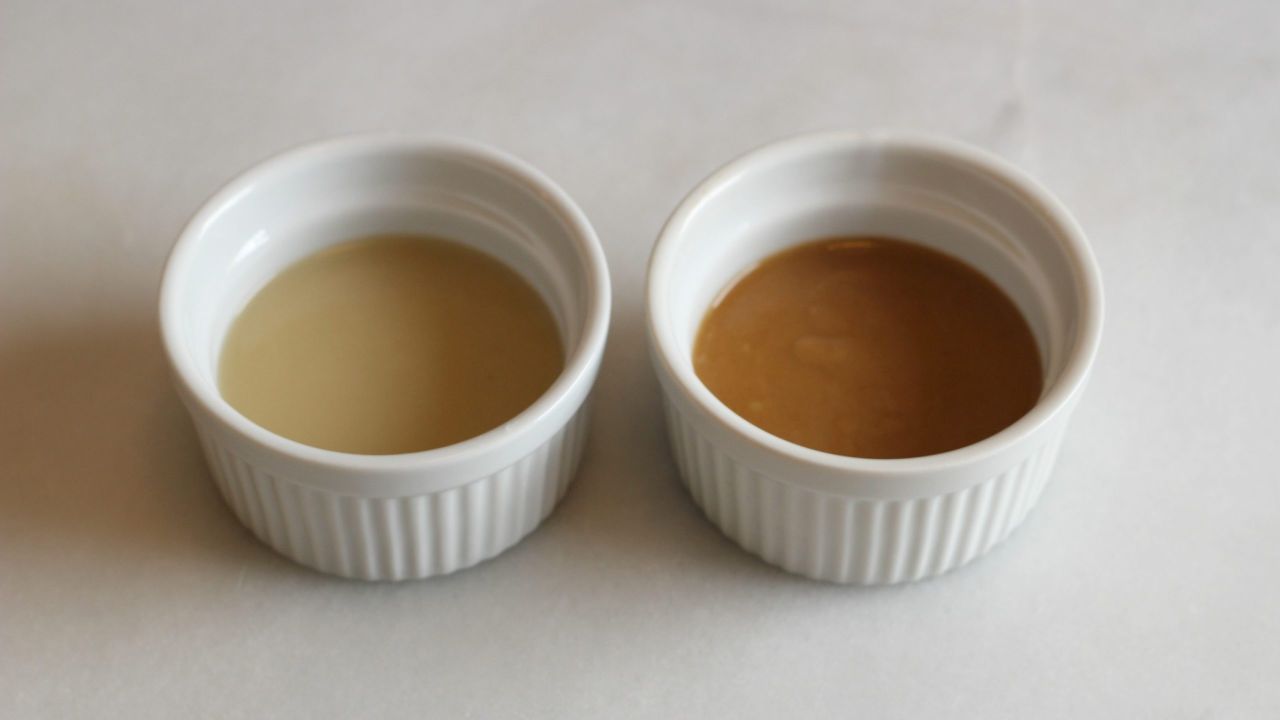 A darker roux imparts more flavour to whatever you add it to, but you want to make sure it’s the flour you’re browning, not the cooking oil. If you’re aiming for a nice, chocolate-hued roux, butter isn’t your best bet, as those solids will burn, and flavour your roux with acrid, rather than pleasingly nutty, flavours. To see just how big of a difference the oil made, I made two different brown gravies with darker roux: One with regular butter and one with clarified ghee. The butter-based roux took about 12 minutes to get to this darker, almost milk-chocolate-brown place: The ghee-cooked flour took almost twice as long to get just as dark (the ghee roux was also a lot looser, but this didn’t affect its ability to thicken): 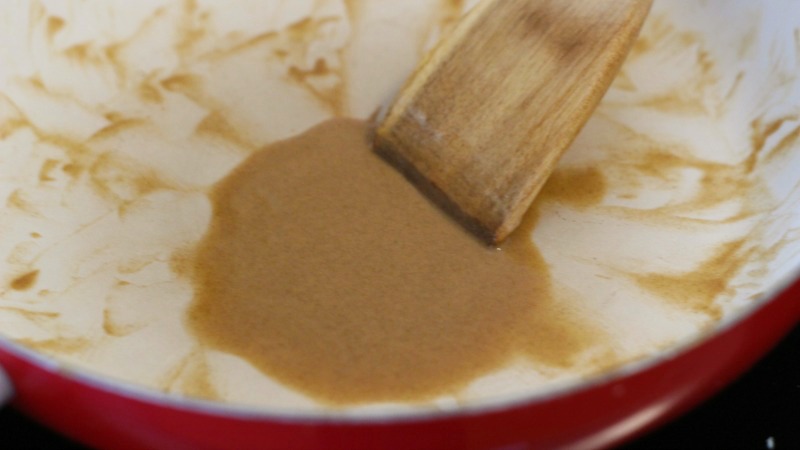 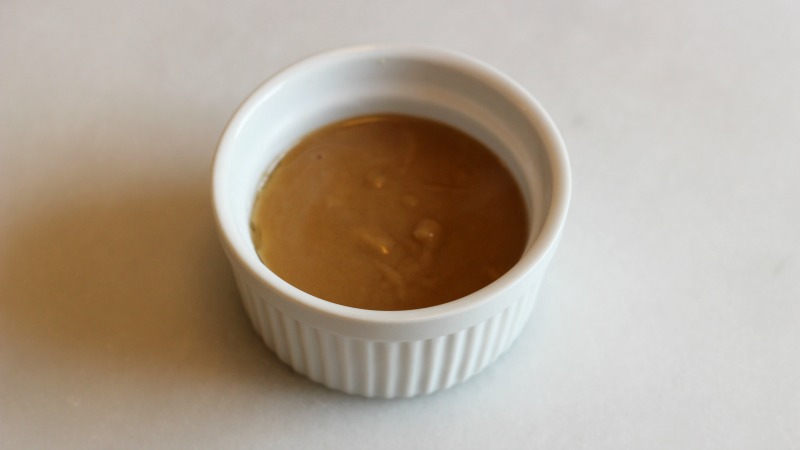 A Note on Liquids and Their Temperatures 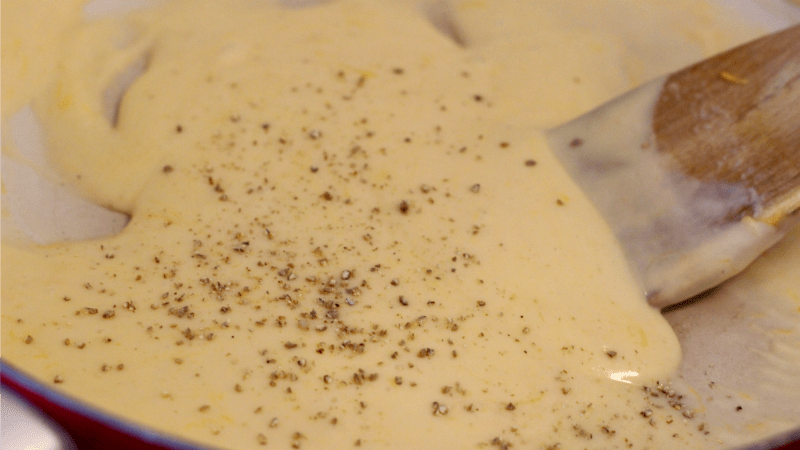 A lot of people swear that your liquid — rather it be stock or milk — needs to warmed before it’s added to a roux. Then there are those that claim exactly the opposite, particularly when it comes to white, dairy-based sauces like bechamel.

I’ve added milk and stocks to roux at a whole variety of temperatures, and never found that it made a difference one way or the other. (I tend to add cold liquids, because I can’t be bothered to take that extra step and heat them ahead of time.) For me, the key to silky, lump-free sauces and gravies lies not in the temperature of your liquid, but in how well you whisk it.

To make a simple cheese sauce, I simply make a white roux (about 33g each of fat and flour) as described above, then dump — and I mean dump, not drizzle — a cup of of whole milk in the pan, whisking continuously. Sure, there are some clumps at first, but everything eventually disperses and thickens up into a thick, shiny sauce. 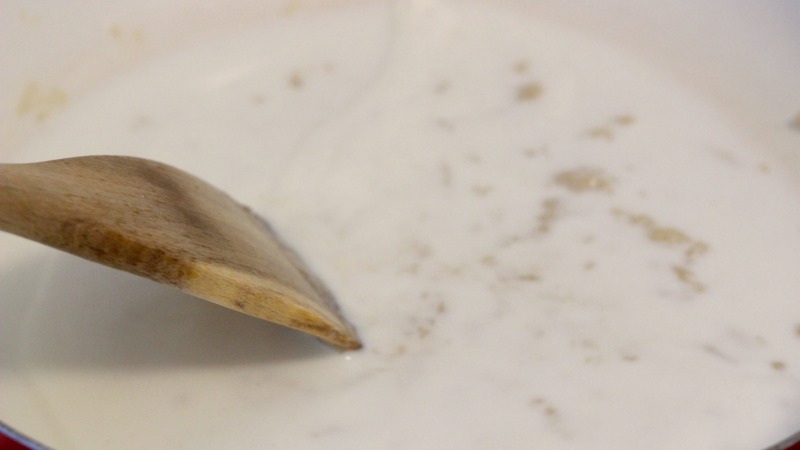 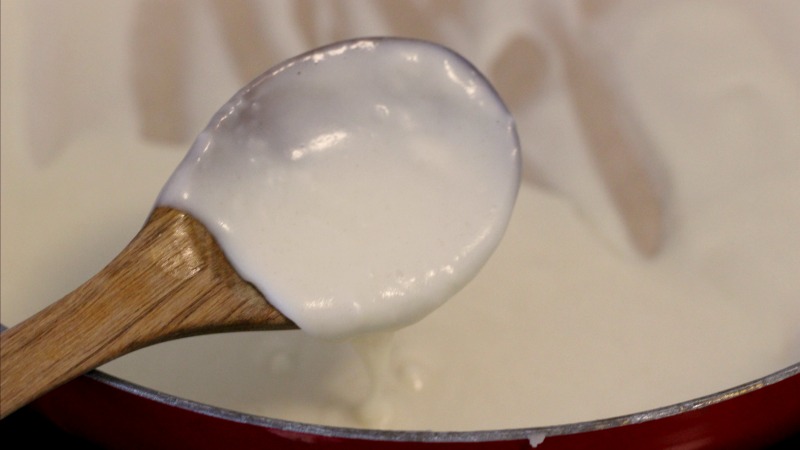 From there, I chuck in a handful or two of cheese, add a squirt of mustard, and season with salt and pepper for a cheesy sauce that’s perfect for stirring into macaroni or dipping pretty much anything in. 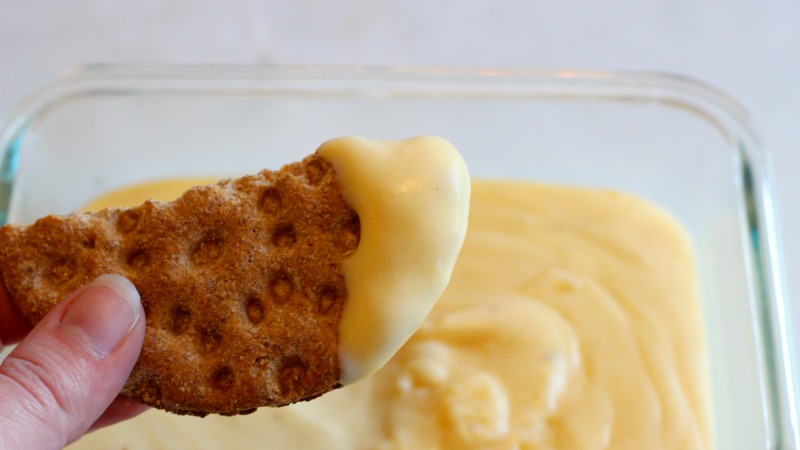 Then you’re ready to add your liquid, be it broth, stock or dairy. If you’re a bit skittish, just add it slowly, and stir, stir, stir until the roux disperses. Keep stirring until everything gets nice and thick, then serve your sauce or gravy proudly.