Australia has a reputation for having lots of deadly animals – but we’re actually pretty safe from apex predators. As long as you keep out of the water and don’t attempt to box a kangaroo, you’re relatively safe from harm. Not so in America, where mountain lions have been known to kill and eat humans. If you’re every hiking in the US and bump into one of these surly cats, here’s what to do.

Stumbling upon a mountain lion is pretty rare, but if you happen to do a lot of stuff outdoors, it’s good to be prepared just in case. Here’s what you should do if you encounter a mountain lion in the wild.

This infographic from The Art Manliness‘s Ted Slampyak explains what you should do if you come across a mountain lion, cougar, or puma while you’re out hiking. It might seem counter-intuitive, but resist the urge to run. Running can encourage the mountain lion to chase you.

Once you’ve gained your composure, make yourself look as big as possible. Use jackets, gear, and motion to give the illusion that you’re much larger than you actually are. While you’re doing that, make as much loud noise as you can. Keep your eyes trained on the mountain lion so it knows you’re not prey, and slowly back away. Hopefully that’s enough to let you get away. If it attacks you, use whatever you can to fight back. Don’t play dead. The mountain lion will give up if you put up enough of a fight. 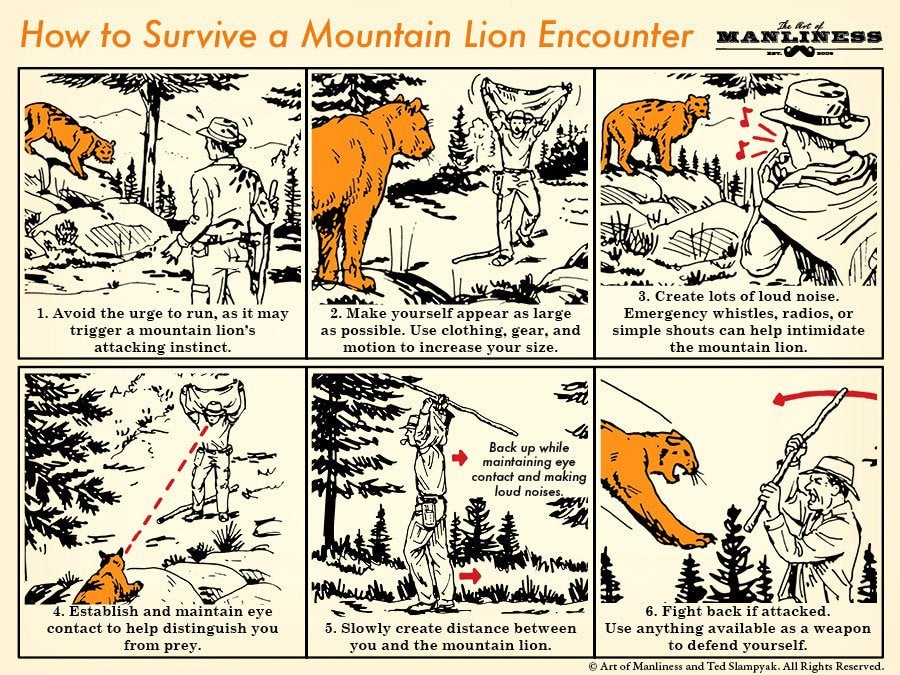 [Via The Art of Manliness]